When I first started this blog, I wanted an eye-catching picture at the top of the page. Given the title of this blog, with it's Ludlumesque (in my view) overtones, I wanted a picture that reminded me of those classic airport-thriller book covers that I bought in the Seventies and Eighties; 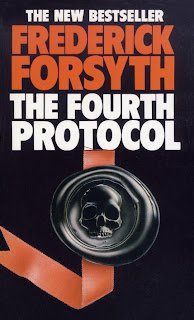 picture courtesy of www.bearalley.blogspot.com.au
(I almost called this blog "The Teeritz Protocol"  when I first set it up, but felt that Agenda seemed like the better choice of wording.)

However, I wanted the picture to reflect as many of my interests as I could cram into the frame, while still leaving room for the blog title to appear. And, since I would be using a bold, upper-case block font, I didn't want to obscure the title.
So, I spent quite some time arranging the items in the photo so that they would not obscure the text when viewed on a computer screen.

This here picture was my first attempt;

It worked well-enough, I suppose, and it showed a neat little mix of my wristwatches (my main love), a short snippet of my Bond fan-fiction, and a fountain pen and corner of a typewriter. This seemed to reflect what I was into when I first started this blog.

This picture was okay for a while, but I wasn't crazy about using a manila folder for the background because a corner of the table was visible underneath. My wife liked this banner picture and was surprised when I decided to change it.
The next photo would be a little more ambitious. A few more items strategically arranged, but still needing to keep a percentage of the frame blank for where the blog title would appear. And, since I'd just recently purchased a new camera with some interesting filter software in it, I decided to have a play around and see what I could come up with; 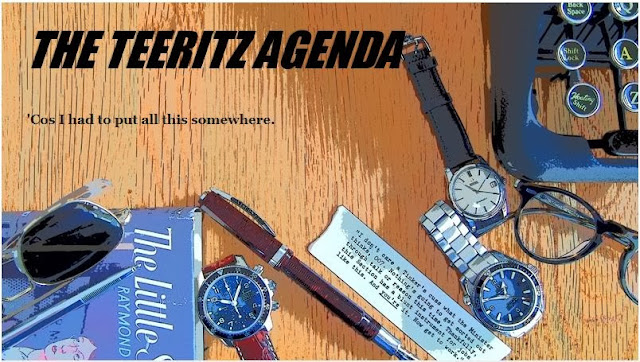 Sure, it was okay, but it always seemed a little too wide for my liking. I wanted it to look a little more widescreen to subliminally reflect my interest in film. And, to mimic the cover-art of the vintage Ian Fleming hardbacks of the '50s and '60s... 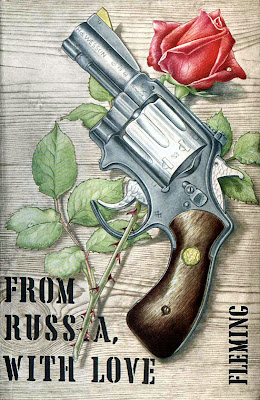 ...I wanted the photo to look a little more like a water-colour or trompe l'oeil-style painting like the Bond book art painted by the legendary Richard Chopping.
I was reasonably happy with the end result, but something about it always niggled at me. Maybe it looked to me like there was too much dead space in the frame.
Although, I have to say it looked pretty neat seeing it through Google Translate; 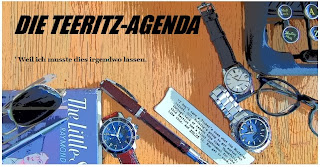 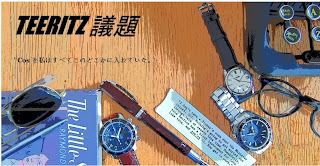 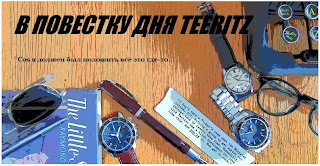 And so, over the past couple of days, I thought about re-doing the banner. It's was as good an idea as any, I suppose, and I may switch it back to the old photo anyway if I tire of this one.
I still wanted the picture to reflect the things I'm into, but I couldn't find a way to add some of my own creative writing. Looking back, I should have typed up half a page of a screenplay and left it sticking out of the Royal QDL. Ah, well...
Still, the watches are well represented, as are the books. I'm into classic American crime fiction and you would all know by now that I'm a Bond fan. The auto-focus was set to capture the Omega planet Ocean dive watch and the book spines clearly enough. The Persol sunglasses were thrown in to provide some more contrast against all of the warm tones. Looking at it now, some psychoanalyst would say that it would "signify your wish to remain anonymous on the internet, Herr Teeritz." Perhaps. I suppose this is why you'll not see any detailed pics of me or my family on this blog.

There's enough of the Royal QDL visible for even a novice to recognise it as a typewriter. I chose the Royal because it has a real typewriter look to it. To my mind, anyway. And it was a scorching hot day yesterday when I took the photos, so this provided a glow through the venetian blinds. Man, when we move to our next house, I'm gonna have to install wooden venetians first thing. They're so photogenic.

Lord knows, I have numerous versions of this photo, plus others that I took, to choose from;


The picture below shows the same effect as what's been up for the past year. I chose not to use a picture with a camera in it since I don't consider my photographic skills to be sufficient, and I don't want to confuse any readers who may stumble across this blog thinking that it's a photographic blog. 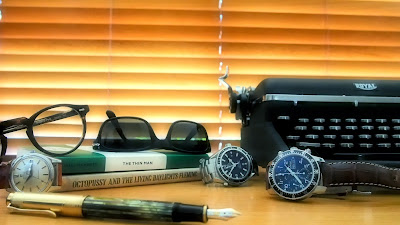 Black and white to make it look like some kind of surveillance photo. 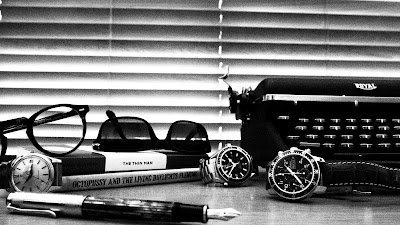 Again, if I decide to change the banner picture, I'll have to crop the replacement so that it's narrower than these.
Anyway, this seemed like a pleasant way to while away an hour or so as the temperature climbs to 43 degrees Celsius.
Man, it's hot! Sorry, I know that many of you out there are currently struggling through Winter, but man, it's hot here in my town today!

Thanks for reading, and looking, all!