Friday,   10:52pm AEST
Based on the kind of weather we've had in Melbourne this week, if I died today and went to Hell, I'm pretty sure I could handle the temperature. Although, I probably shouldn't tempt fate. Day's not over yet.
I'm writing this post from one of the libraries where my wife works. It was her idea to bring the kids in, in an effort to escape another day of searing heat. Forecast is for a cool change later this afternoon/evening, but first, we have to get through the maximum temperature of 44 degrees.
I've been enjoying wearing my Sinn 103 St Sa chronograph lately. 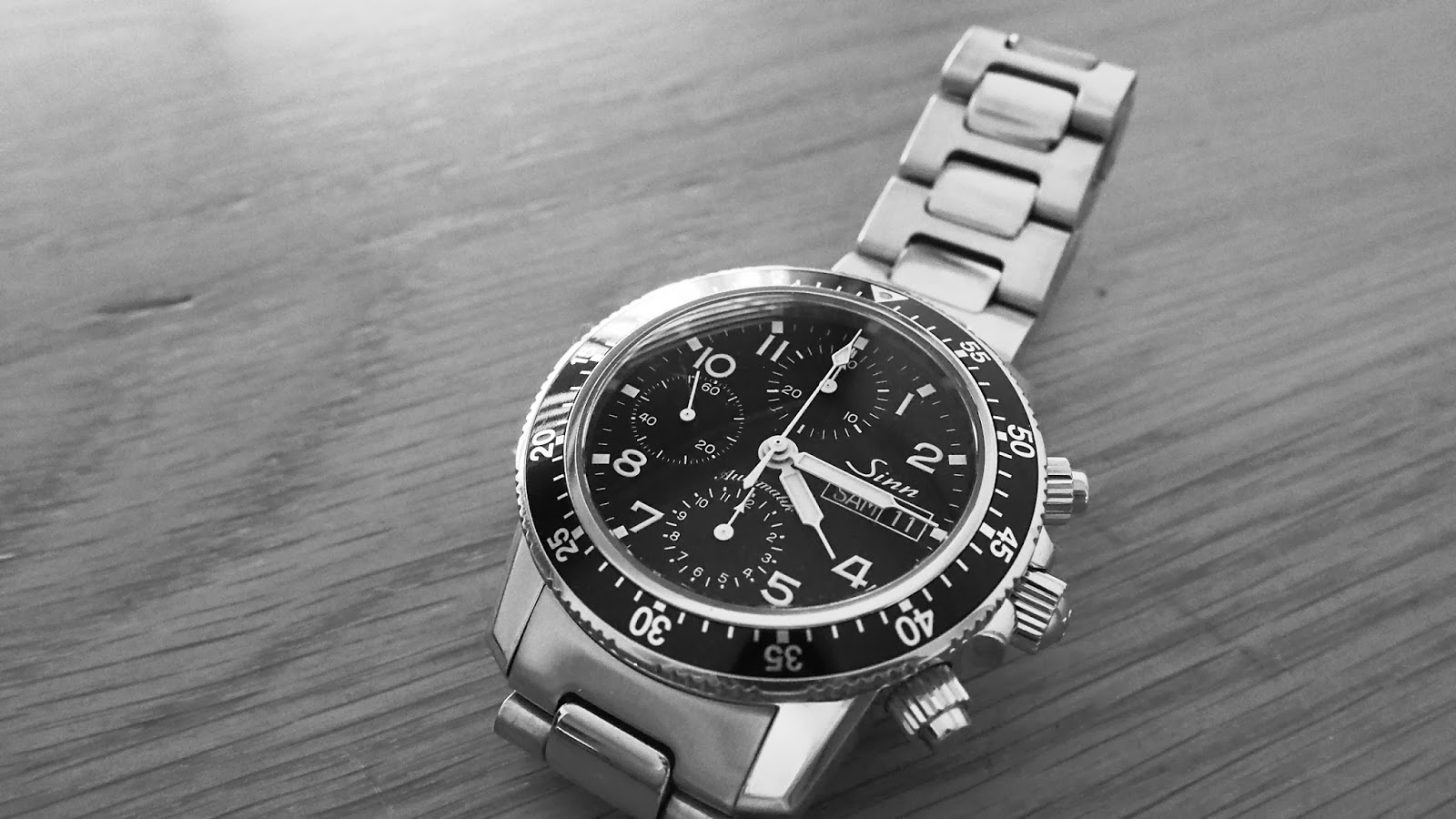 It ticks a lot of boxes regarding what I expect from a wristwatch of this type;
*  200m water-resistant - More than I'll ever need, but when it comes to water-resistance, overkill can be a good thing.
* Sapphire crystal - Extremely scratch-resistant. The anti-reflective coating on the crystal has a couple of minor scratches on it, but a wristwatch is meant to be worn, after all.
*  Great legibility - The hands and numerals are coated in SuperLuminova which provides readability in low light and makes the watch readable in the wee small hours.
* Mechanical - And not just any mechanical. This watch houses the legendary Valjoux 7750 chronograph movement. Tried and tested since the mid Seventies, it's a veritable workhorse.
Saturday
I wore the watch on its bracelet when we watched "Red 2" on Lolly Night. I liked this sequel, even though the reviews at the time of its release were less than favourable. I suppose it lacked some of the quirkiness of the first film, and it seemed that Mary-Louise Parker (a Goddess in my book, and I've never seen an episode of "Weeds") wasn't utilised to best capacity, but the action scenes in this one were well handled. And Helen Mirren with a sniper rifle is always fun to see. 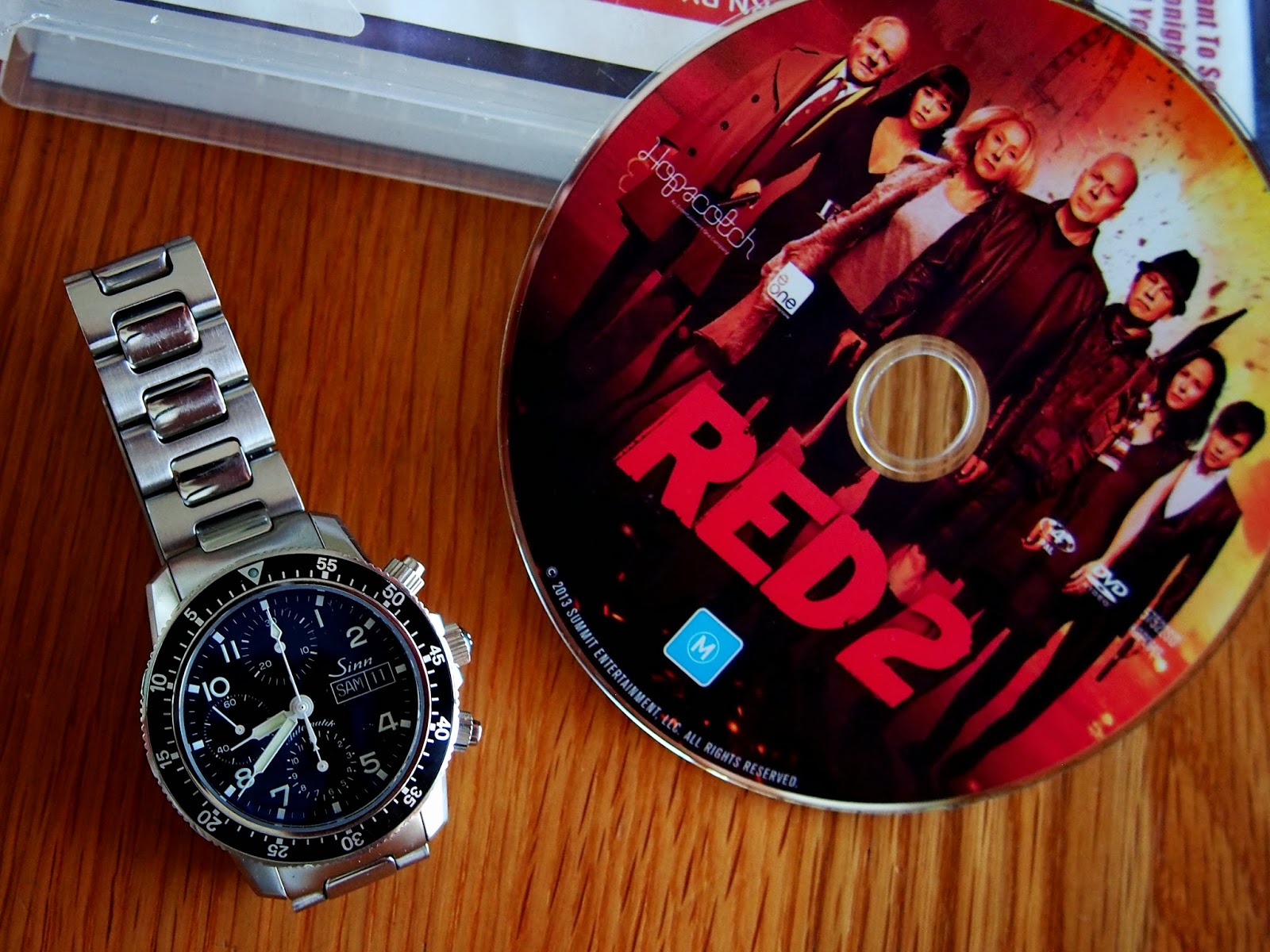 Sunday
Took a few snaps for my watch forum signature pic. Wasn't happy with the lighting on this one.

Didn't like the lack of detail in this one.

I was happy with this one, so that's the one I used.

Later that day, I decided to put the Sinn onto a strap. This way, I can alter the fit of the watch as the day progresses, to allow for the swelling of my wrist as it warms up throughout the day. I had a few straps to choose from and, even though I don't wear straps in Summer (because perspiration can really eat through leather), I thought I'd do it to see how much wear and tear I could put the strap through.
I chose a brown ZRC calf-skin strap with the alligator print embossed on it. And then proceeded to hammer it over the next few days.
Tuesday
My daughter and I went to the local Apple Store for an iPad seminar where she would get to make a short film using the iMovie and GarageBand software. Needless to say, the place was crowded.
When my wife got home from work, we all hit the pool at my gym and then went to the beach for another dip before the sun came down. The leather strap got broken in nicely.

﻿
Back from the beach as it got dark. The house is brick veneer and has a flat, tin roof. Therefore, it stays quite hot, even as it cools down outside. although, if there's a breeze going, opening up most of the windows allows for a nice flow-through of air. 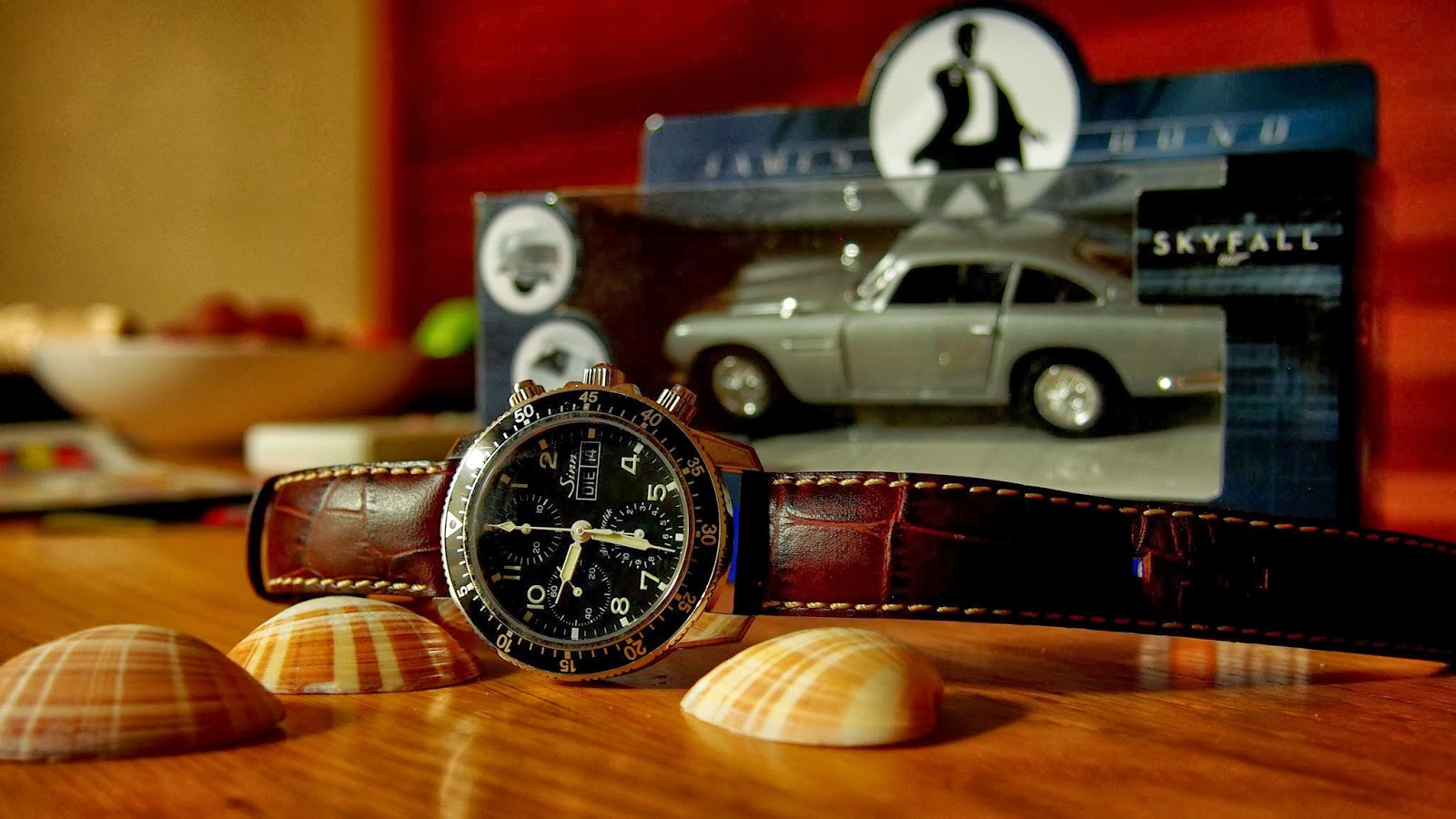 Wednesday
Another 40+ degree day and my wife and I thought we should all do something to take our minds off the heat. We would head into town. No real game-plan, just park at a meter on St Kilda Road and see where it takes us. We walked over to Federation Square, which was jazzed up about ten years ago and is now home to a few cafes and bars as well as the Australian Centre for the Moving Image, where regular exhibitions to do with film, video, gaming, etc, are held.
Outside in Federation Square, a large screen was showing a game from The Australian Open tennis tournament. There were rows of chairs set out and those who could stand the heat were seated there watching the game. 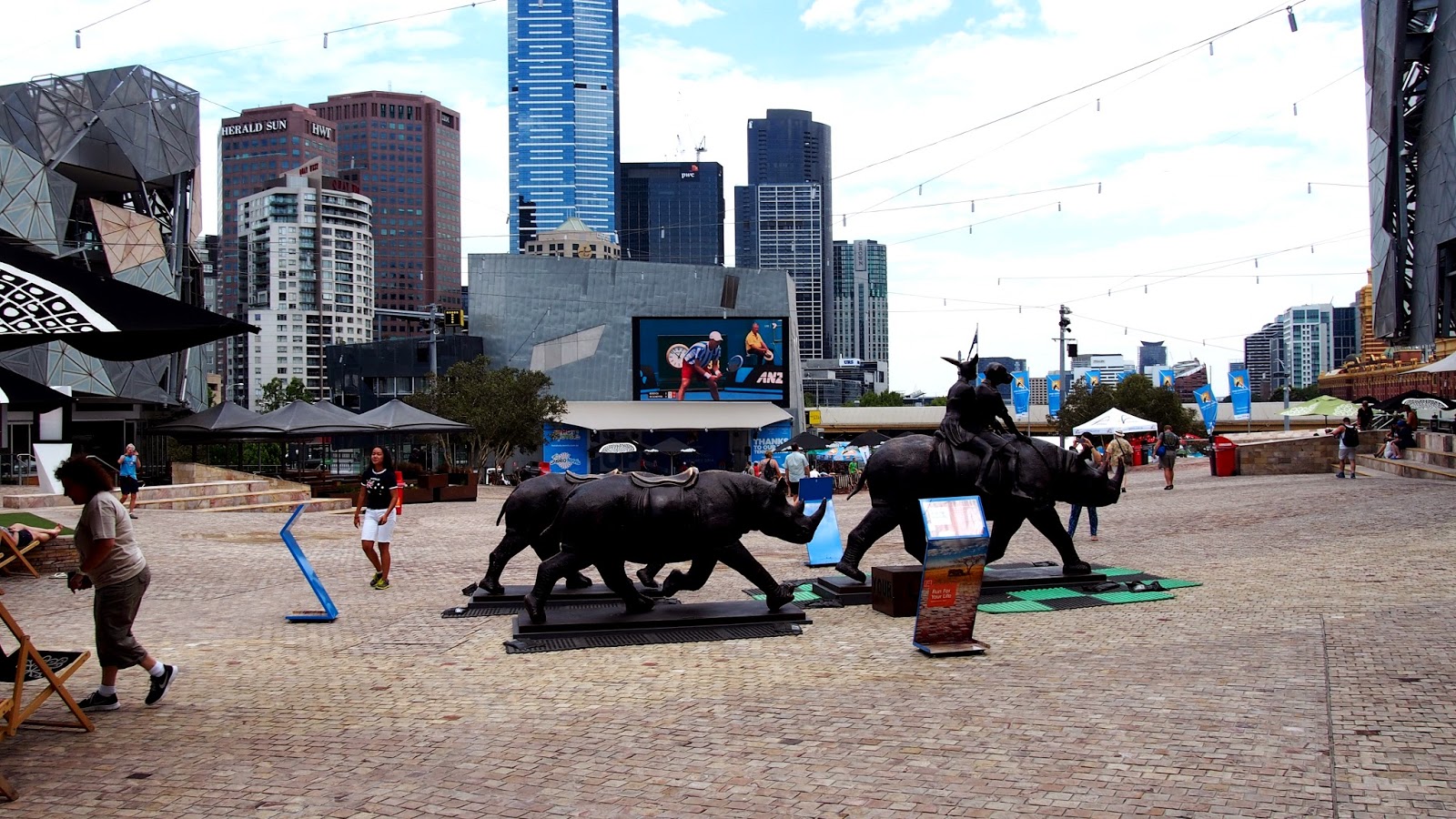 Inside the Ian Potter Gallery at Federation Square, there was an art installation made up of cake icing. It was titled "At Home With The Hotham Street Ladies". Here is an exhibit of a lounge room. Except for the coffee table and chairs, everything else  is made up of icing, including the patchwork quilt draped across the back of the sofa. 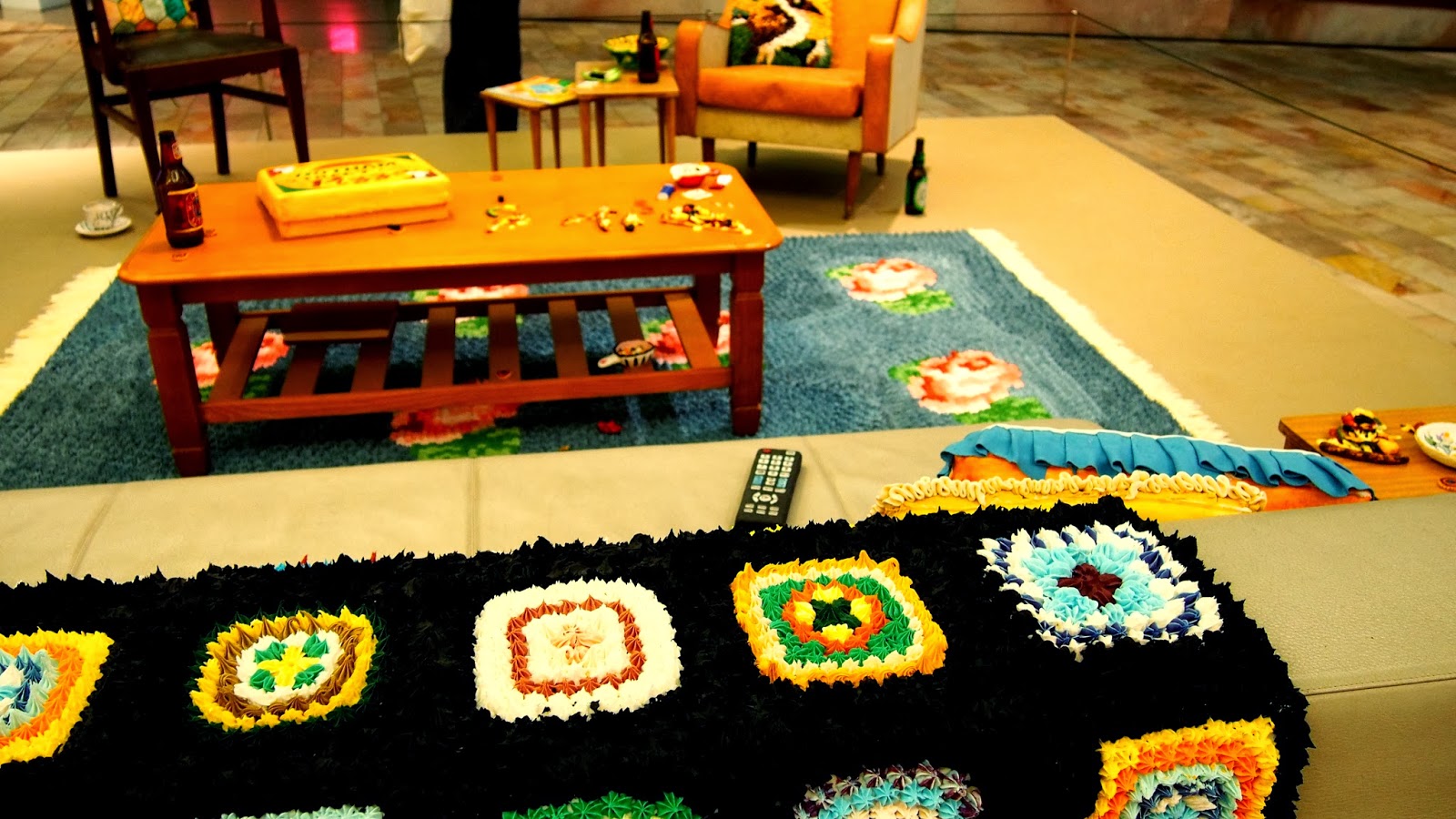 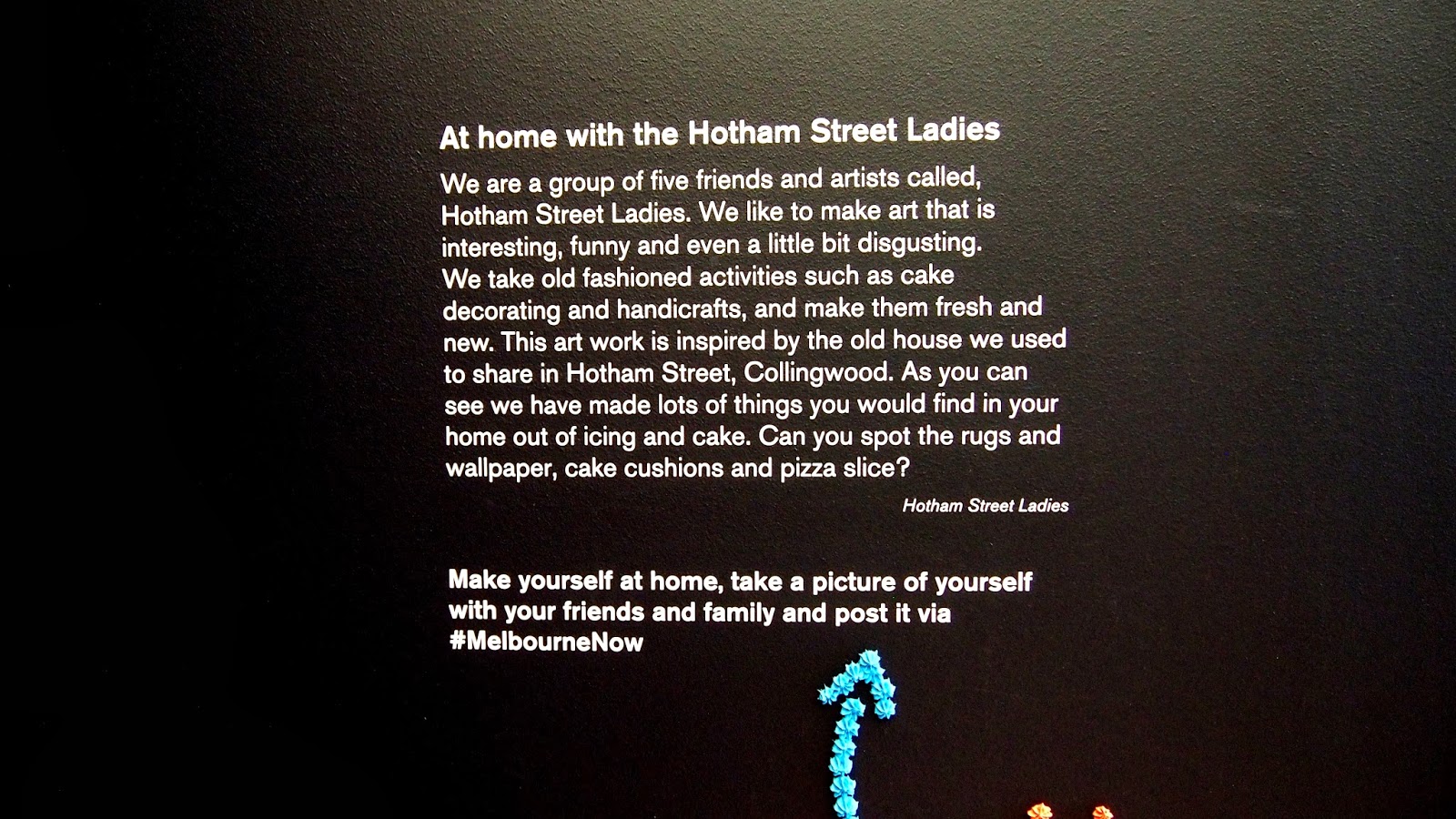 Yep, even the butts are made from sugar icing. 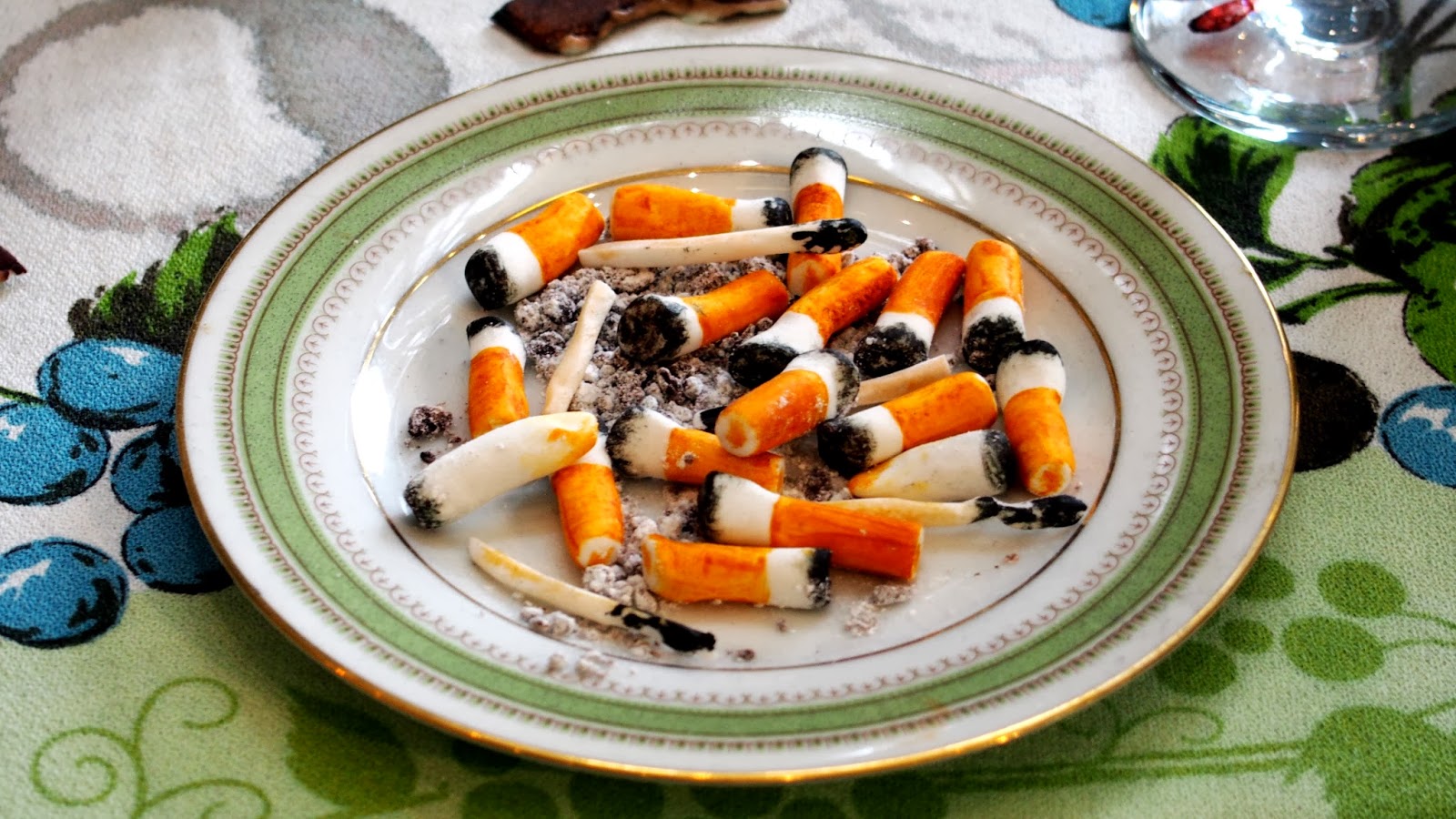 In keeping with Melbourne's varied and, at times, eccentric arts culture, there are numerous upright pianos scattered throughout the city where people can sit down and tickle the ivories. This kid played a nice tune.
And they've also gotten somebody to crochet some woolen cosies for the trees.
I love this city. 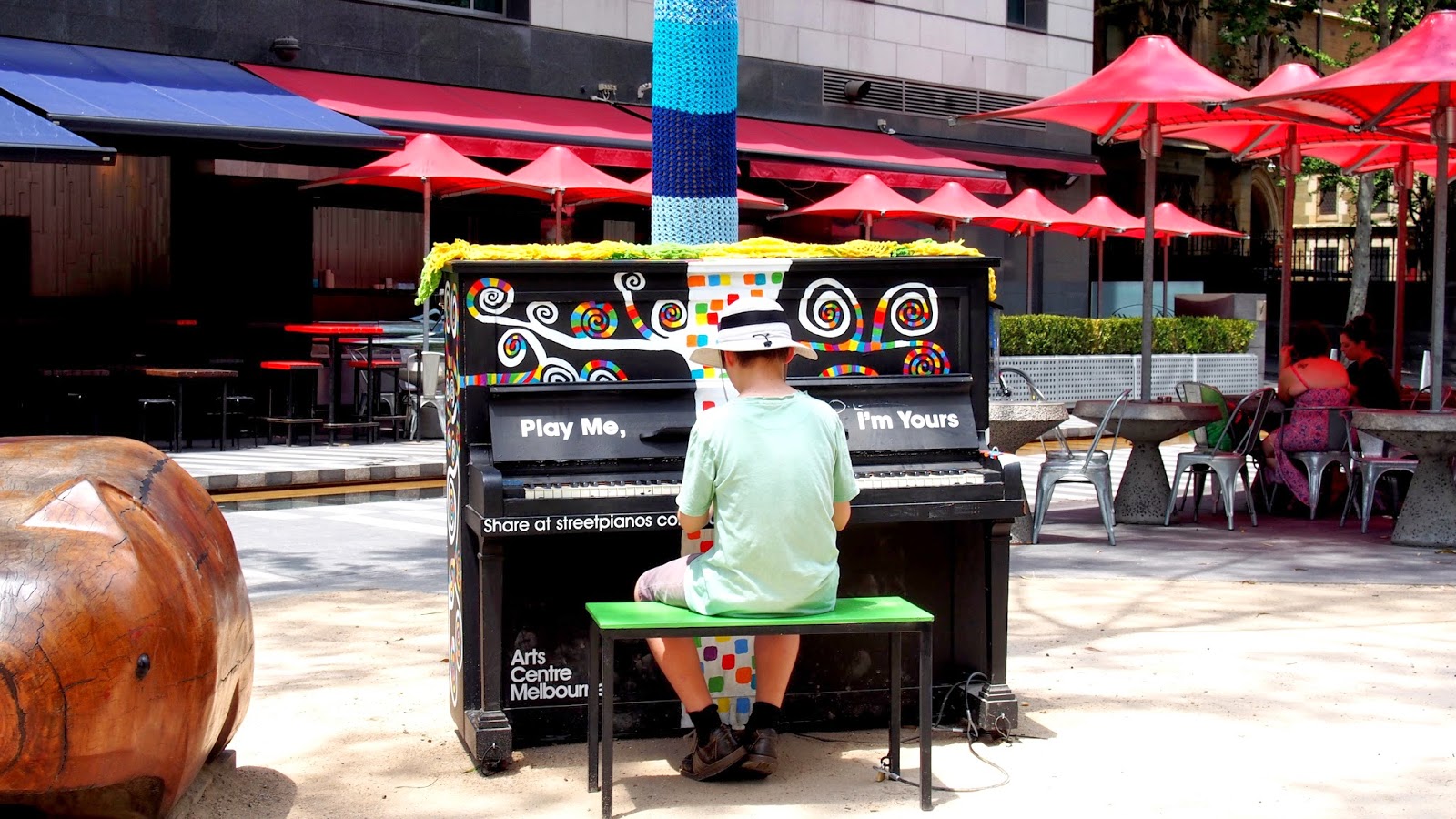 As we headed back to the car, we stopped at the National Gallery of Victoria. The curved-arch entrance is famous for its water-wall.

It's a glass wall with water running down it. Naturally, we made a bee-line for it. I was sorely tempted to press my back against it for an hour or two.

Instead, I settled for a cooling bath for my watch. I could have stayed there all day; 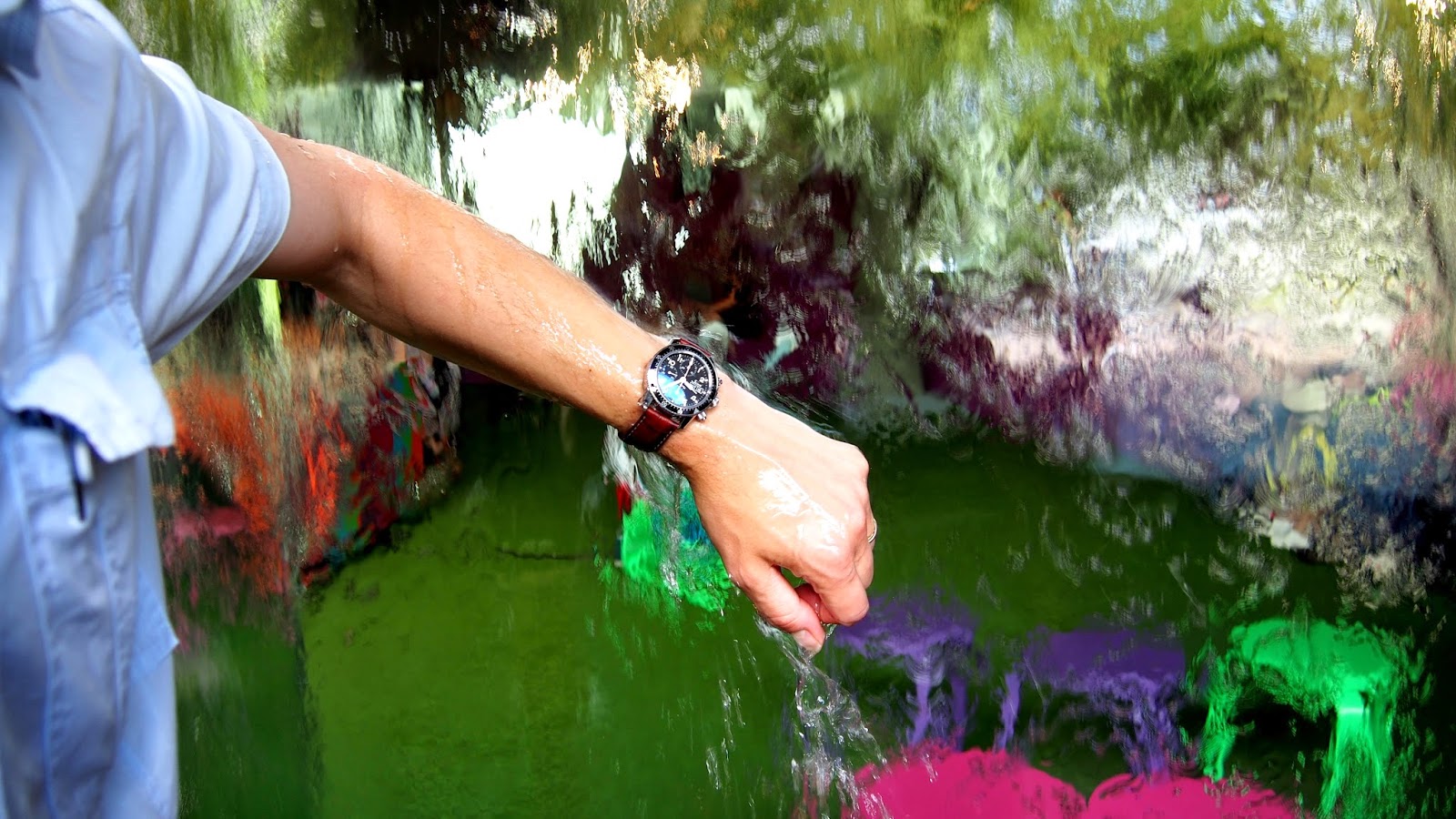 When we got home, it was time for a drink. But there was just one thing wrong; 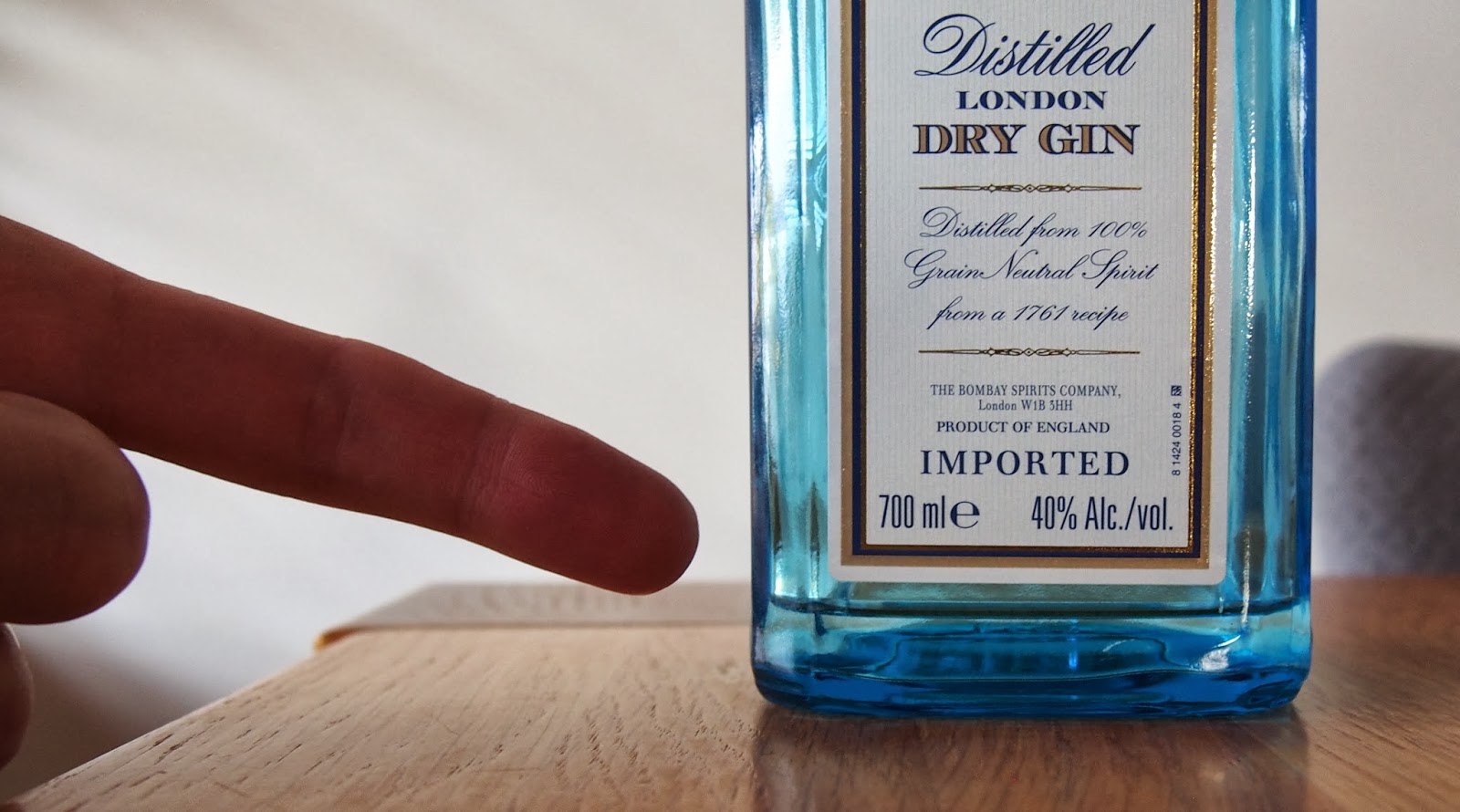 There was enough Bombay Sapphire for one decent drink. I was going to need some more. And soon.

Anyway, I had enough for this drink. One thing, though, is that I've begun garnishing my Gin & Tonics with slices of cucumber instead of lemon. When I went back to the Designing 007 Exhibition last week with my cousin, we hit the bar afterwards and had a couple of drinks. They garnished the first round with a slice of lemon, but the second lot of drinks had cucumber slices in them. I thought it was odd. Until I had a sip. Yes, the gin and the tonic were still in abundance on my palate, but there was a follow-on taste of cucumber which was instantly refreshing as it conjured up images and memories of summers long ago, and salads, and barbecues.
So, I've been taking my G&Ts with cucumber since then.
I took the watch off briefly. The strap was holding up rather well. Some darkening of the leather and the white stitching, but otherwise, it's doing okay. Since I've gotten it wet so many times this week, it's now molded nicely to the curvature of my wrist. 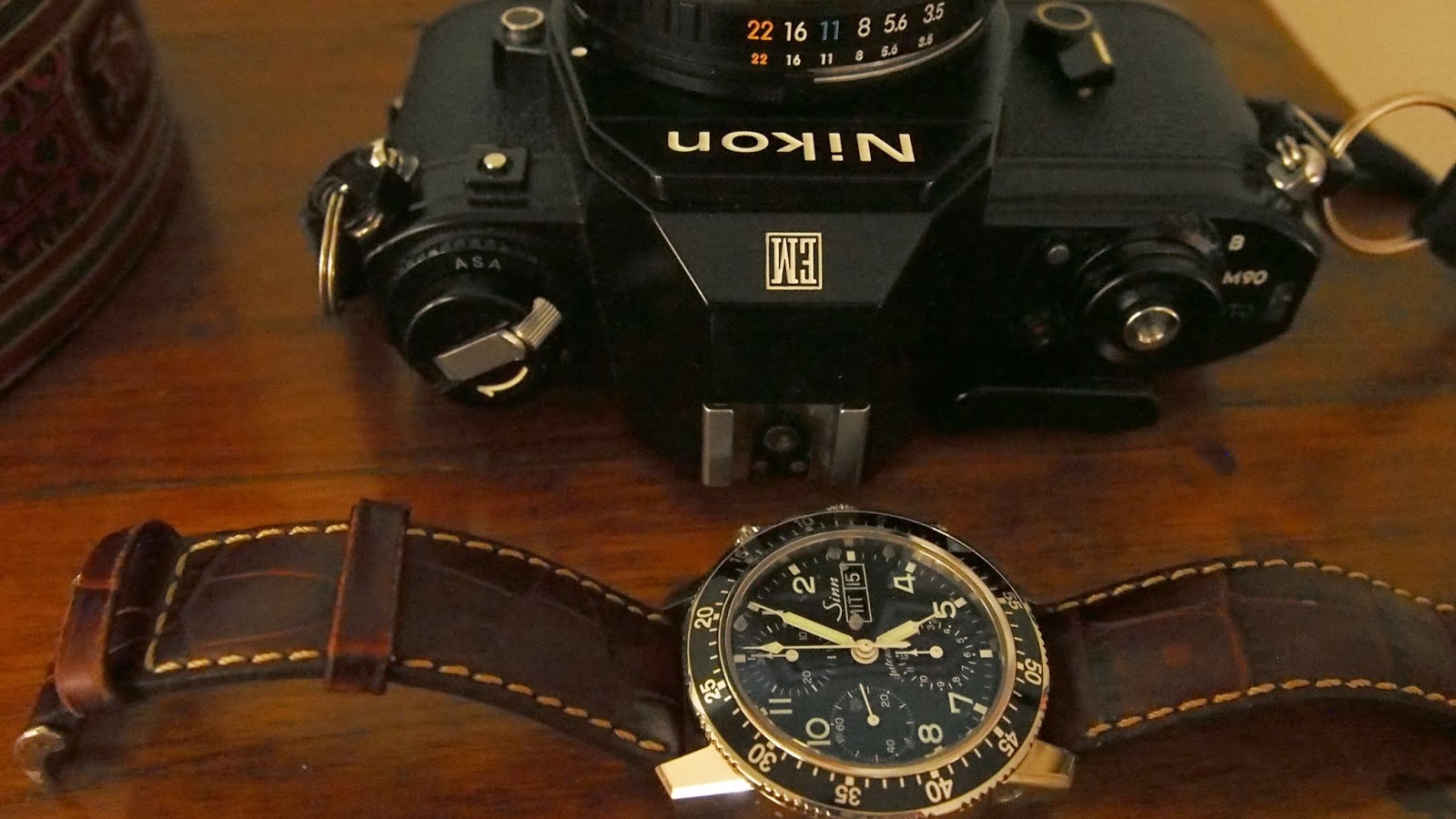 Thursday
It was gonna get to 43 degrees today. I took the kids in to the library where my wife works and we sat at a table and read magazines and books in air-conditioned comfort. Another good reason to join your local library, folks. There are worse ways to pass the time. We were there a few hours and I actually began to feel cold (I was wearing shorts), but I knew better than to grumble about it since I'd be getting back into my car with lousy air conditioning for the drive home.
Later that night, we hit the beach. It had gotten overcast, but the heat was still with us. I wore my bathers, but didn't go into the water. Ever since that damn Spielberg movie back in '75, I'm always thinking about sharks whenever I go to the beach. I got quite interested in them after I saw "Jaws" and used to know a lot about them.
And so, I sat on the beach with my camera and attempted to get a shot of my wife emerging from the surf like Ursula Andress in "Dr No."
She hates me taking her picture.

So, I took one of my watch; 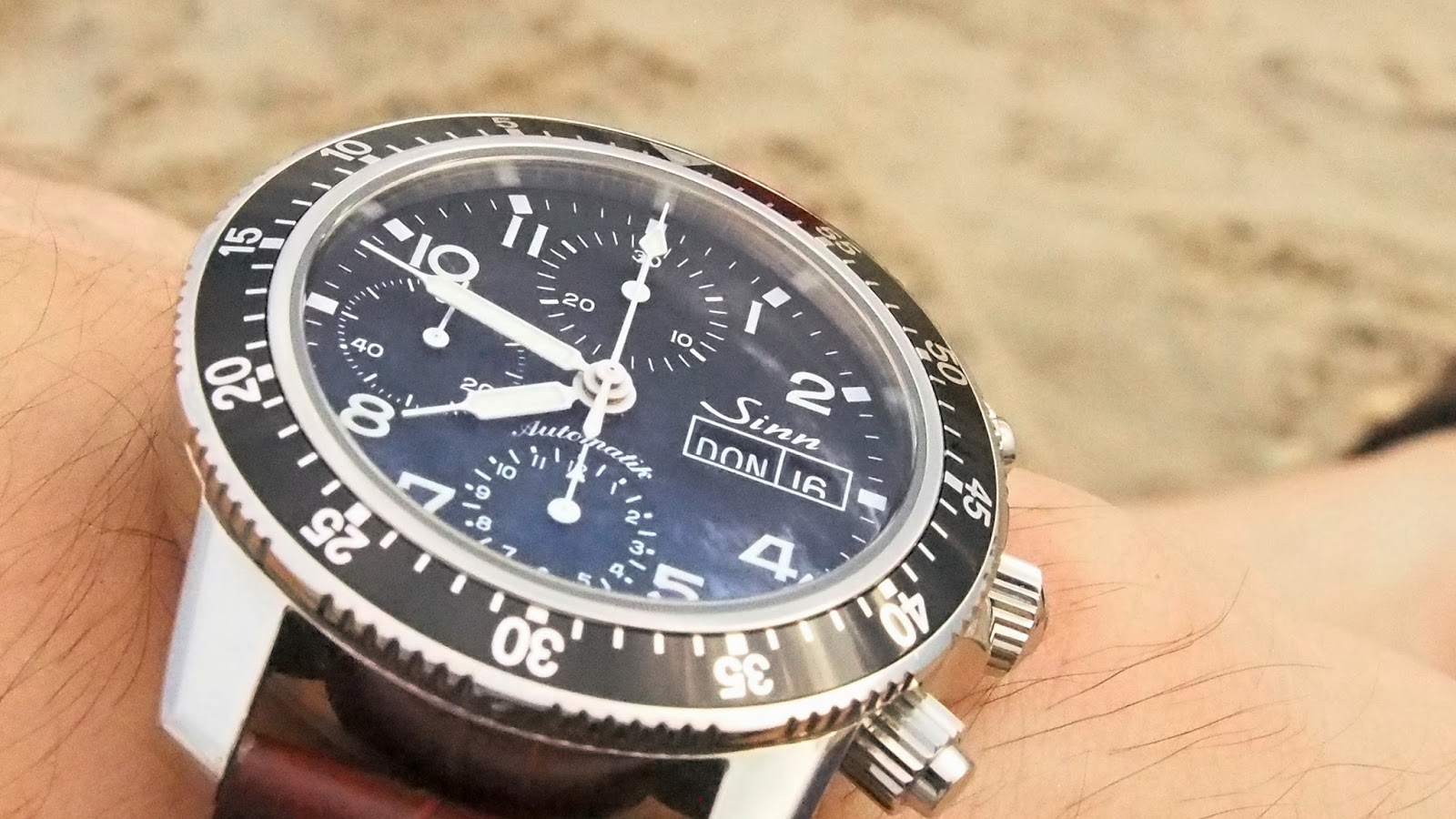 Plus, a Diorama-effect photo of the folks on the beach at 8:34pm. 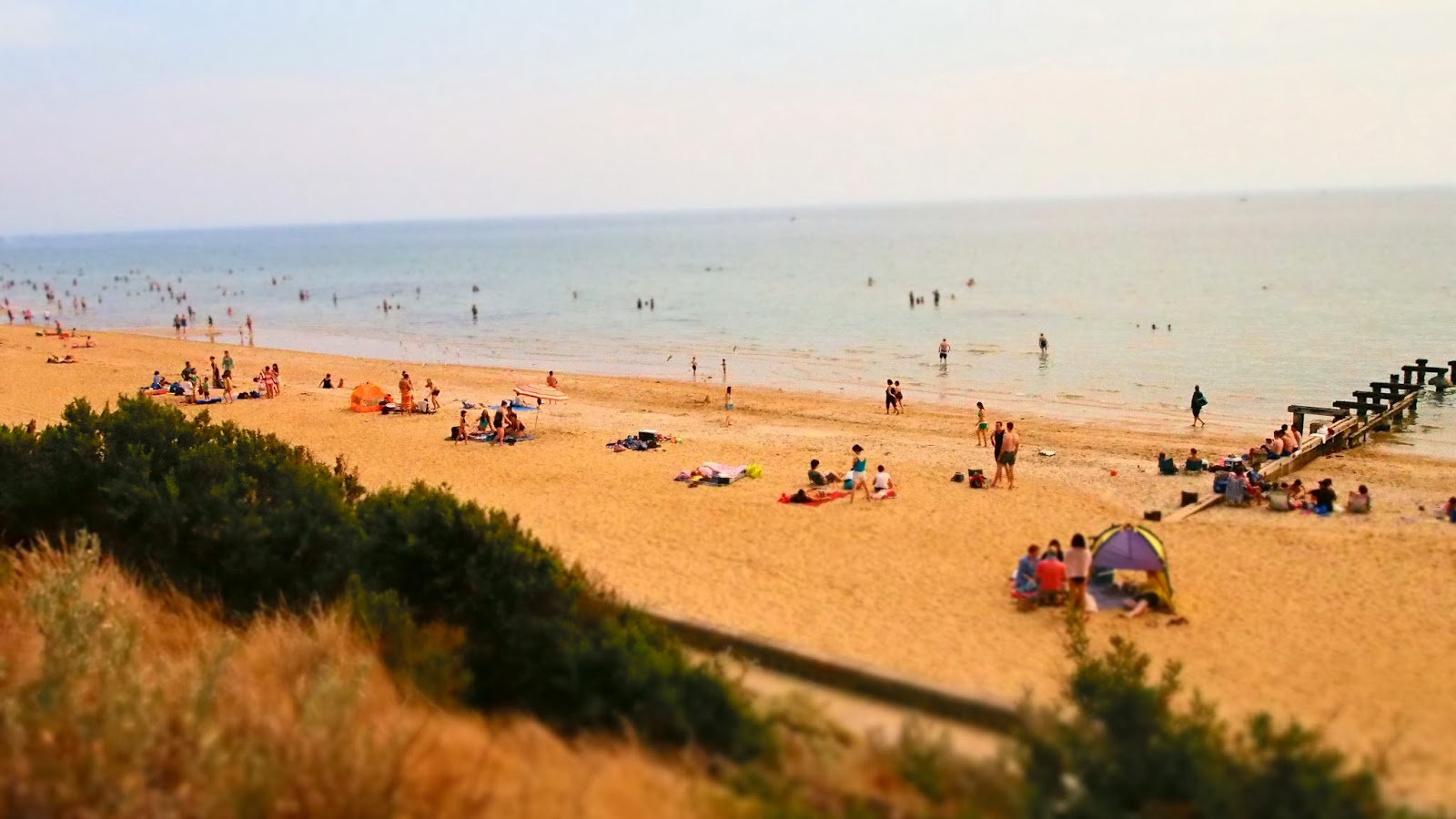 And so, this brings us full-circle to today, Friday, January 17th, 2014. On the way home from the library today, we stopped at an Op Shop and I found two rolls of ASA400 35mm film and four rolls of ASA200 film. The only catch was that I had to but the two cameras that they came with. Still, it all only cost me fifteen bucks. And I'll take the cameras to another Op Shop next week to keep things moving.
I took the kids to the gym pool for another dip earlier this evening. The door to the place was locked and I went into the gym to enquire. They told me that they've had a lot of non-members sneaking in to use the pool. I suddenly recalled that line from the brilliant neo-noir "Body Heat" (Dir: Lawrence Kasdan, 1981) where lawyer Ned Racine's (William Hurt) police detective friend, Oscar, explains the spike in crime during Florida heatwaves;

OSCAR
Real Good. Always starts hopping
in weather like this. When it
gets this hot, people try to
kill each other, figuring the
rules don't apply.

The cool change kicked in about three hours ago and the house is slowly cooling down. Our cat has gone AWOL. Poor thing was sweltering over the last few days. She insists on wearing fur, and spent much of her days laid out on the floor in some kind of stupor. We wiped her down a few times with a wet wash-cloth. I don't think that impressed her very much.

Anyway, that's another week wrapped up. I'll leave you with a shot that I sneaked at the Designing 007 exhibition last week.

"For a golden girl knows when he's kissed her,
it's the kiss of death
From Mr. Goldfinger..." 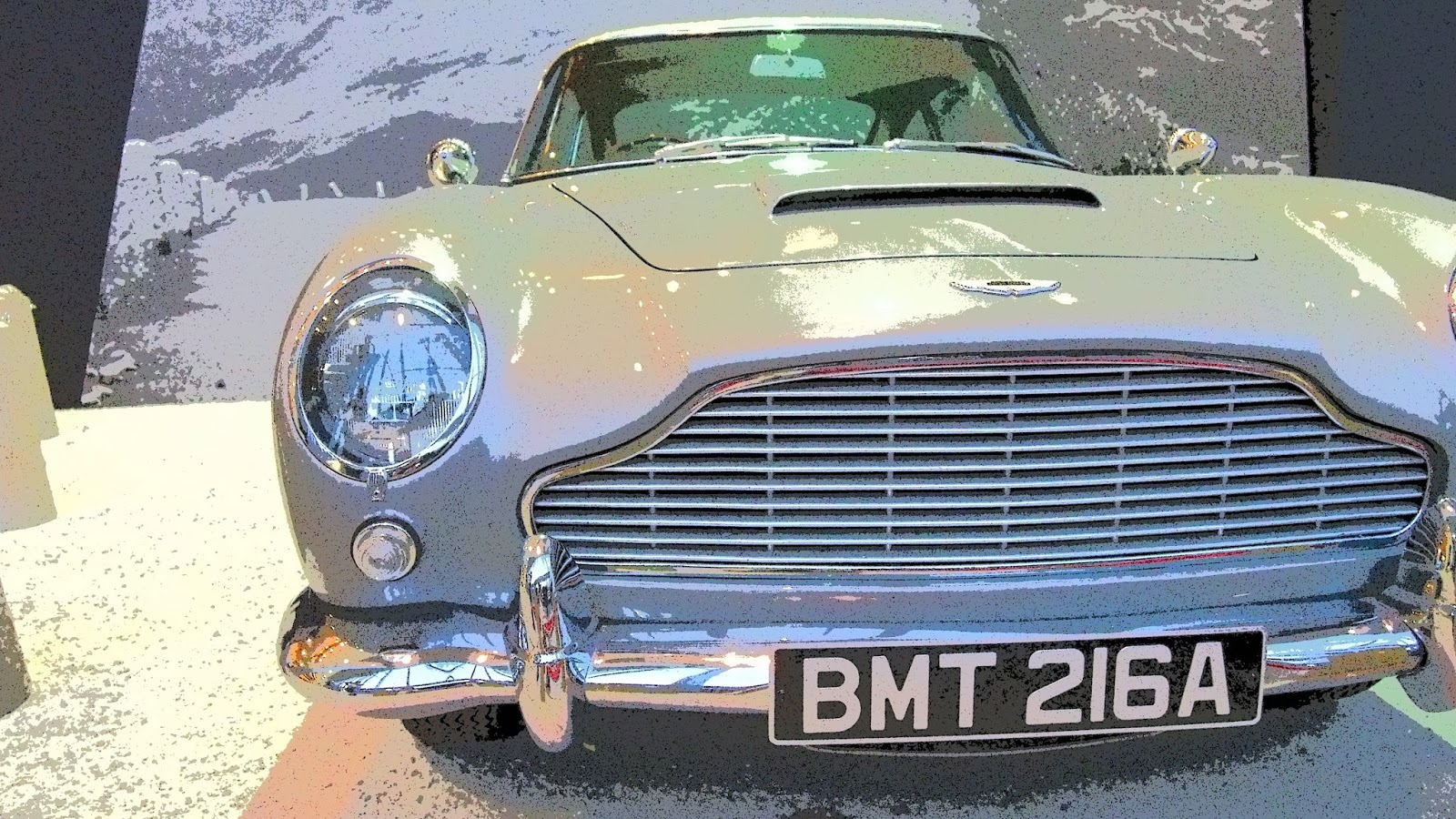 And I just never got sick of looking at this car.