Friday 6:58pm AEST
Nothing really Earth-shattering this week. Just getting the kids ready for their return to school on Thursday. We picked up my son's laptop and I can't say I'm too thrilled with how much a reliance the school will place on this thing as the year progresses. They've assured us that the kids will still maintain the pen-and-paper aspect of their studies, but I feel a little dubious about that. We'll just have to wait and see, I suppose.
Last Saturday
Where did all this ironing come from!? Okay, crank up the iron, grab some coat-hangers, plug the iPod into the dock, and don't stop until the soundtrack's finished. Hmm, brooding score indeed. And a no-nonsense Omega Railmaster strapped to my wrist. 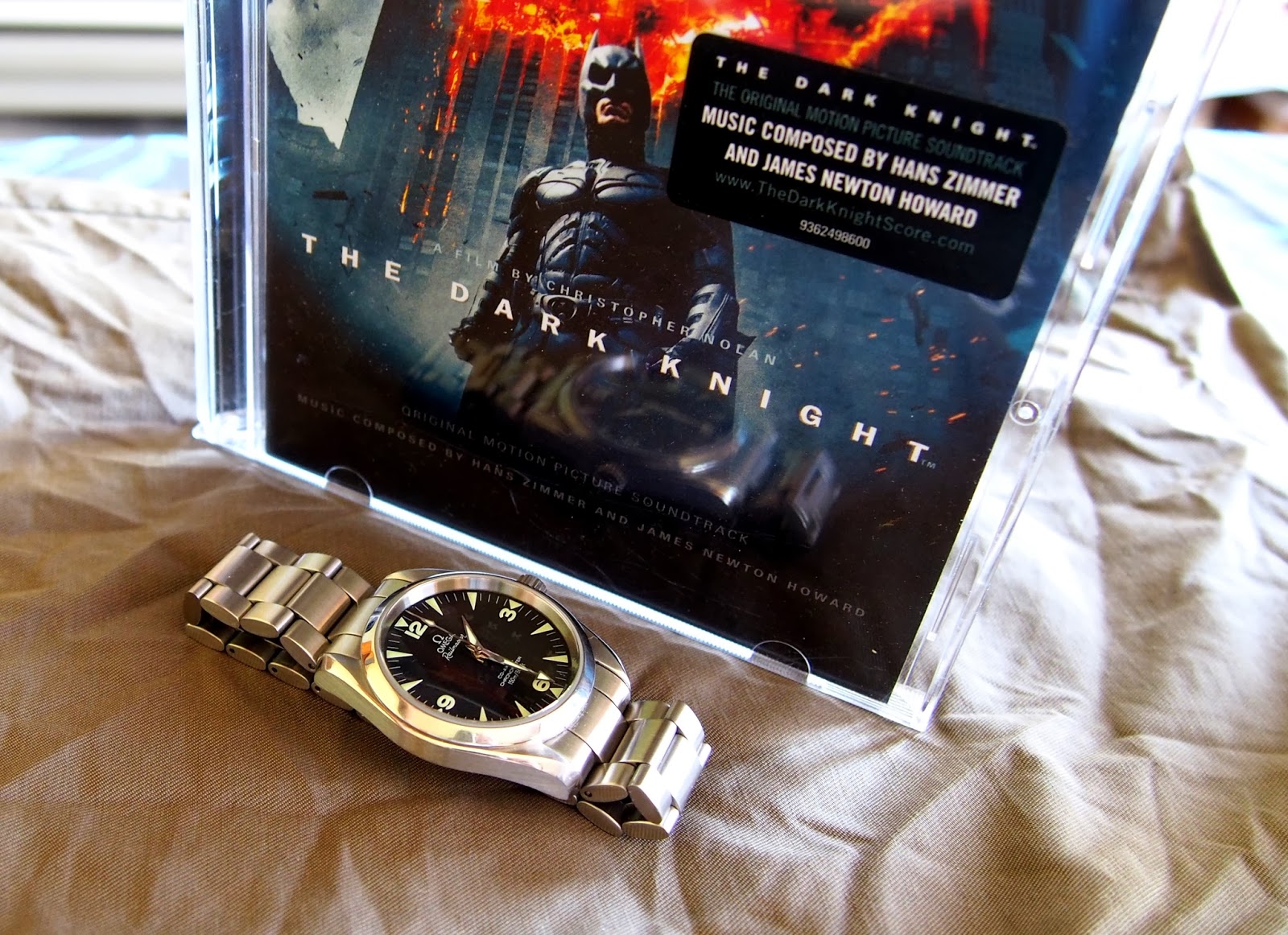 Sunday
Up onto the roof to give the guttering an undercoat. Somehow, I managed to bruise my right eyelid. My wife thought I painted while wearing some of her eye-shadow. I don't know how it happened. She thinks I must have rubbed my eye a little too aggressively. I've no idea.
Switched over to the modded Seiko 7002 'beater' for the painting. 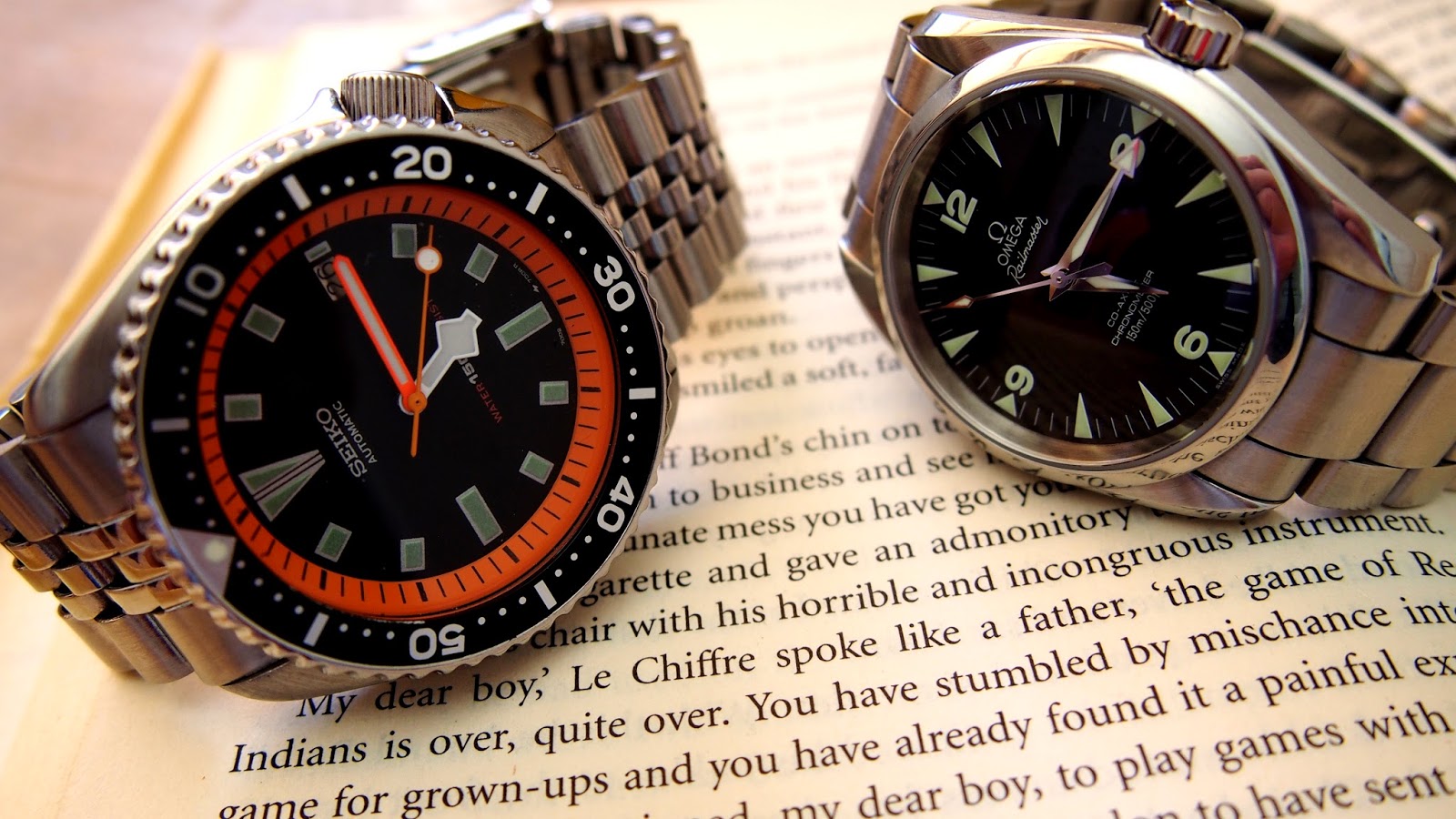 Monday
It was the Australia Day public holiday. Another hot day, too. My wife took the kids to the beach. I stayed home. I got a little sunburned on my neck the day before, so I thought I'd stay out of the sun for a while. I grabbed my laptop and deleted some video file double-ups which were taking a lot of space on the hard drive. It took a little longer than I thought. Nothing that a cup of coffee couldn't fix. Switched over to the Omega Planet Ocean. 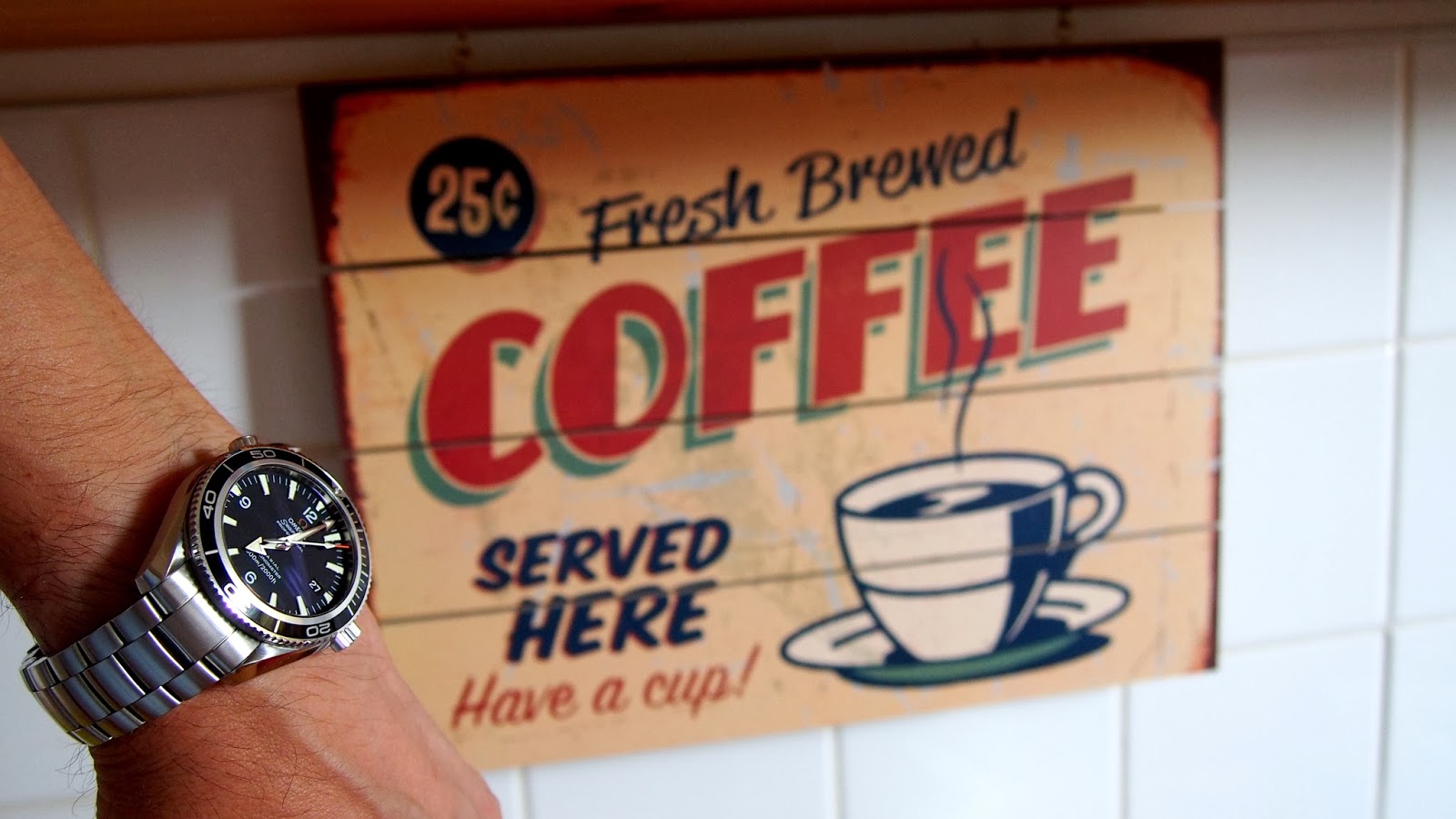 An eight-dollar wooden sign from one of those stores that sells cheap stuff, like no-name brand AA batteries that last an hour and Corey Haim DVDs for five bucks (too expensive). I liked the 1940s-style aesthetic of it. Maybe Robert Mitchum will swing by for a cup'a Joe.


Tuesday
Another scorcher. We hit the pool at my gym, but they were doing swimming lessons, so the pool wasn't open to members till after six.
Plan B- the beach. Fifteen or so minutes later, we scuttled across hot sand and made a bee-line for the water.
I'd bought a new pair of bathers (swimming trunks) the day before and I wasn't happy with them once I got into the water. The waist-band kept folding over itself every time I dived under water. I should've spent the extra fifteen bucks on that pair of Speedos. You get what you pay for. And, being bathers, there's no refund or exchange on them. Ah well, they'll do as spares for the gym pool.
Wednesday
I loaded some film into the Voigtlander Vito B rangefinder camera. I thought I'd see if I could get some better photos out of it this time. Maybe this time around, I'll pay a little more attention to what I'm doing. Switched over to the Hamilton Khaki Officer's Mechanical.

Maybe the Special Photography Issue of National Geographic that my wife found in a thrift store that day may have been the inspiration behind my wanting to use film. 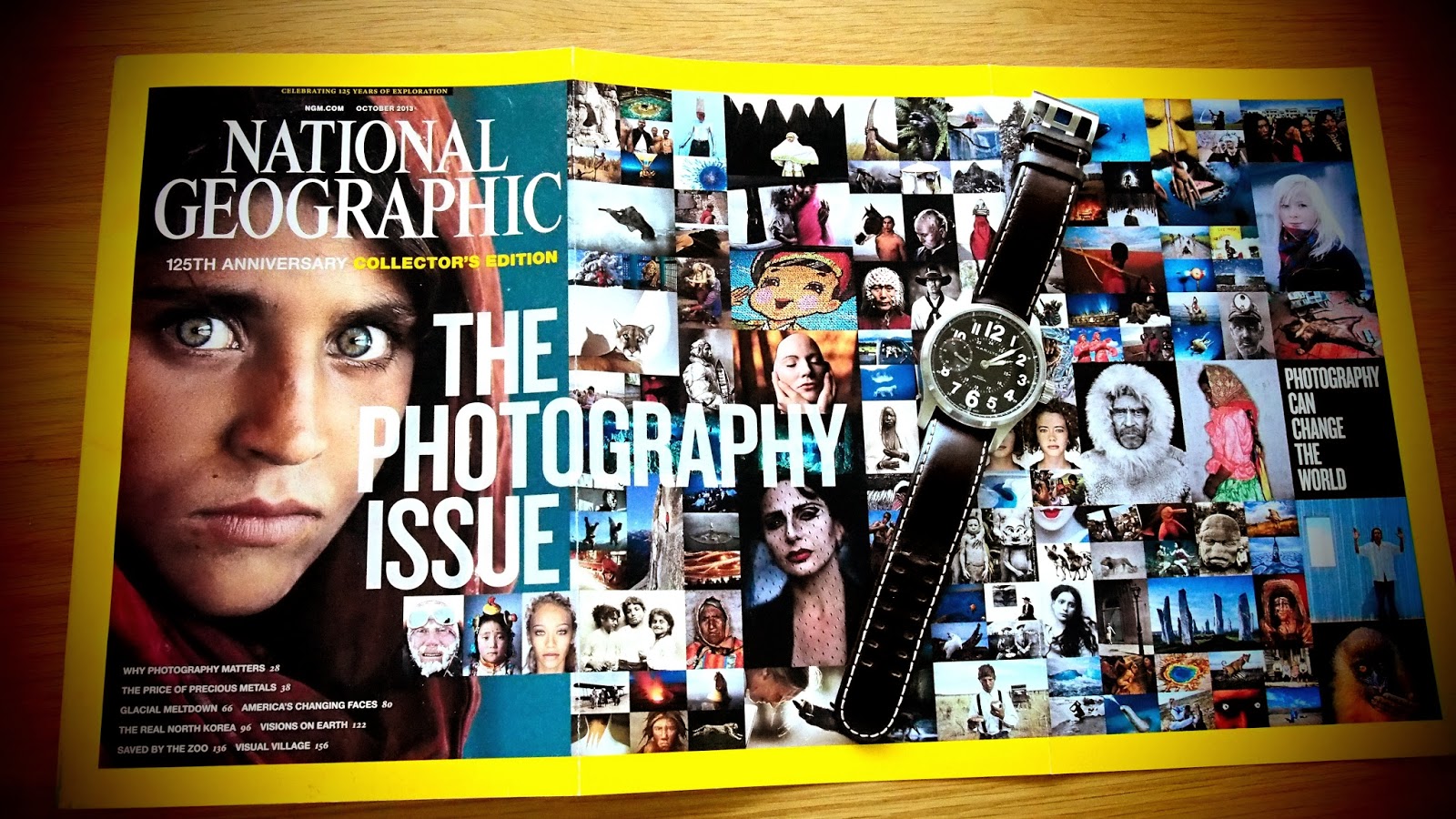 Thursday
I bought another Olympus Trip 35 film camera off eBay. The one I have already might have some issues with it, so I wanted to compare the two of them. Luckily, I was the only bidder and ended up scoring it for twenty bucks. 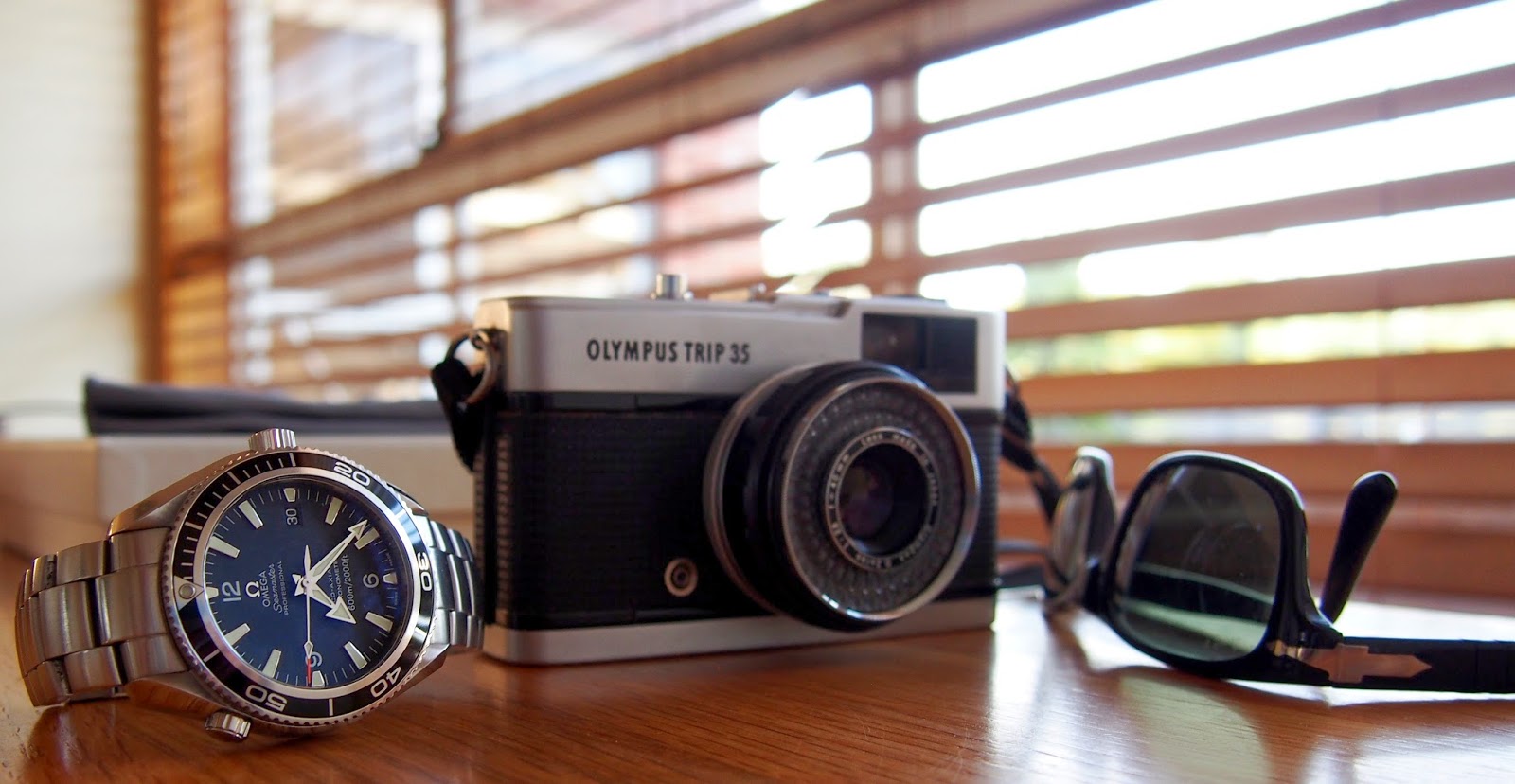 I really like the Trip 35. Simple to use, classic design, built to last. Olympus sold over ten million of them between 1967 and 1984. Probably not a bad idea to have a spare one. Can't wait. My current model dates back to December '67, so I'll be curious to learn the age of this next one, even though there's one lady I know who couldn't care less. 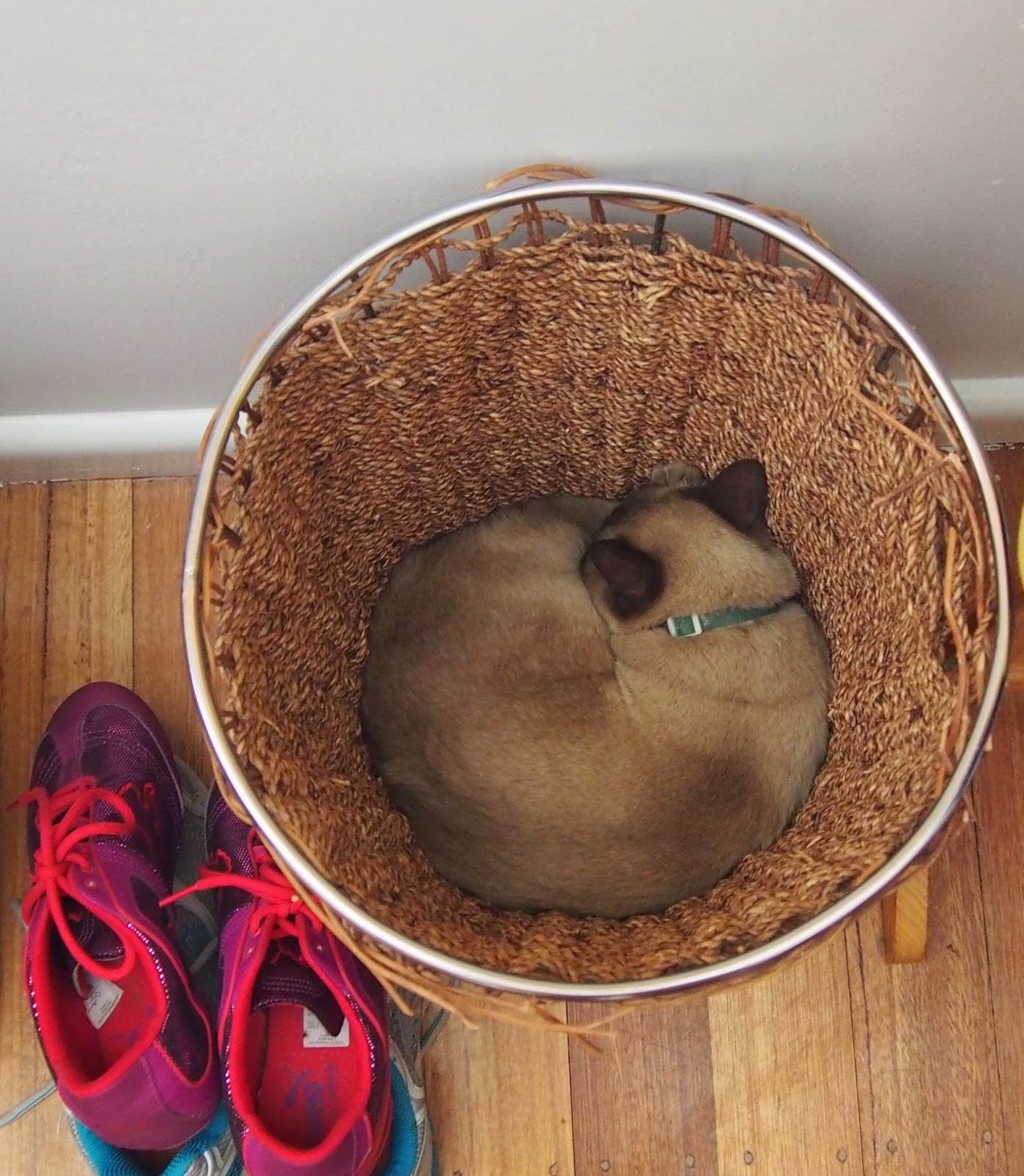 Hottest day of the week and she decides to sleep in our washing basket. My wife was about to get her out of there because she thought the cat looked all scrunched up and uncomfortable.
"Do you honestly think she'd go anywhere that was uncomfortable?", I replied.
Today
And so, with a new camera due to arrive, I took a look at my other cameras and thought it might be an idea to get rid of one. Since getting my Olympus OM-2n a year ago, I haven't used my Nikon EM all that much. It's an auto-only SLR, whereas the OM-2n has both manual and automatic settings. Still had the Planet Ocean on when I took some pictures of the Nikon for the eBay listing.

And that's my week, folks. Sent an enquiry e-mail to another recruitment agency on Wednesday. Ain't heard back. I'll give them a call first thing Monday before I commence my next wave of job hunting.
Classes start up again next Wednesday. Holiday time is over.
That's cool. I'm all set. 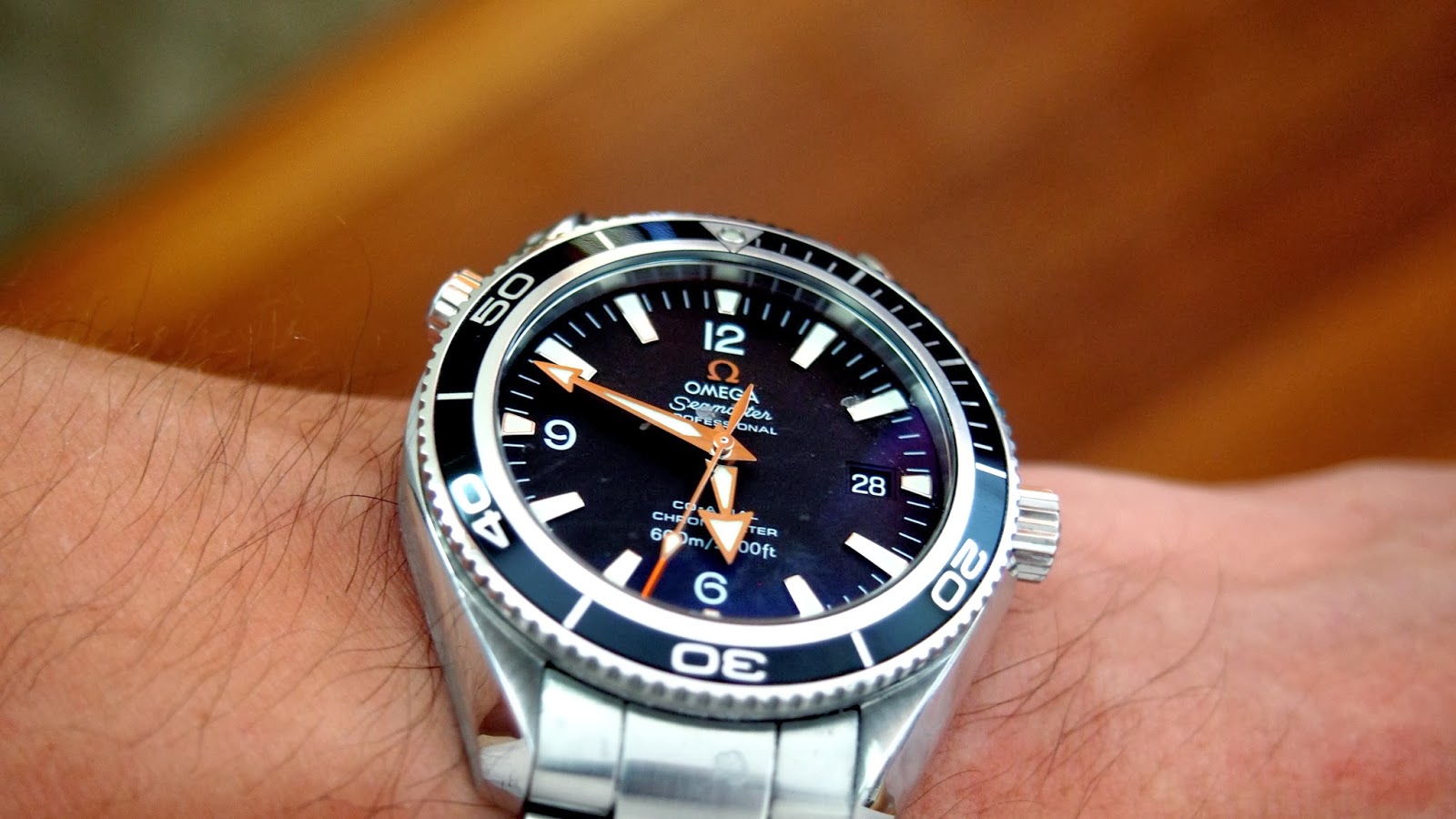 Thanks for reading and have a great weekend, all!﻿
Posted by teeritz at 23:58