I wrote this one about a year and a half ago and posted it up elsewhere on the web. I was reasonably happy with it until I re-read it recently and found what I thought were some glaring inconsistencies. So, out came the red pencil and I began to re-draft it. I've edited almost a third of it and figured I should post it up here in three or four parts rather than in its entirety because it runs about nineteen pages on paper. Equivalent to the chapter in a book.
I'll be posting this up as a mixture between computer font and typecasted pages to prevent the layout (if not the content itself) from becoming monotonous to the eye.
So, if you're up for it, here's the first part. Hope you like it. 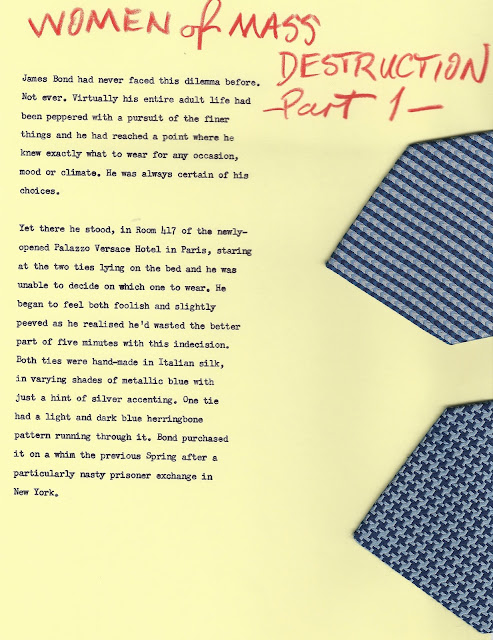 The other was a mixture of light and dark blue interwoven crosses. She had quickly stepped out an hour earlier and bought it from one of the over-priced boutiques in the lobby. He had noticed the tie in the shop window after they breakfasted at the hotel buffet that morning, but hadn’t remarked on it. And yet, after knowing him just on two weeks, she knew him well enough to gauge his taste in clothes. Clever girl, he thought to himself.

The ‘she’ in question was currently taking a shower. Her name was Monica Purdey and she was a mid-level field agent for British Intelligence. Her department was three floors below the offices of the Double-O Section at MI6’s Regent’s Park Headquarters and Bond thought it odd that their paths had never crossed before. She had jet-black hair, smooth pale skin and the greenest eyes Bond had ever seen.

He had read her file prior to this mission. After completing a Law Degree at Cambridge, she did a complete about-face and joined the City of London Police Force as a uniformed Constable at the age of twenty-two, where she steadily accumulated an impressive arrest record. The year she turned twenty-five was also the year the Twin Towers fell and the world had become a different place. Shortly before her twenty-eighth birthday, she reached the rank of Chief Inspector. By now, Scotland Yard had taken notice and she was promptly poached and assigned to their Special Branch as a Detective. Her sharp analytical skills and coolness under pressure came to the fore in the weeks following the London bombings in 2005. It was her involvement in the long and subsequent investigation that led to the arrest of three suspects who were attempting to board a plane for Pakistan at Manchester Airport.

The attack on London had sparked her interest in Anti-Terrorism. Then followed a brief, discreet and exciting affair with a colleague, a former SAS serviceman named Derek Warburton, who told her she was wasting her talents at “The Yard” and should sit the aptitude test for MI6’s intake the following year. Her interest in the War on Terror led her to enrol in the University of Manchester’s Post-Graduate course on “Terrorism in the New Millennium”. The Head Lecturer of Political Science, Dr. Nigel Mathieson, was considered by many in Intelligence circles to be one of the world’s foremost experts on the subject of Terrorism in the 21st Century. Monica Purdey found his lectures exhilarating and caught fire from his words. She wrote a report on the future threats to Great Britain from terrorist cells of the Middle East in “the new Golden Age of Terrorism”. This report she condensed into a furiously written six-page essay during the three-hour MI6 entrance exam seven months later. It was enough for the Secret Intelligence Service to sit up and take notice of Miss Monica Purdey. Her essay showed a thorough knowledge of al-Qaeda’s structure and methodology and her subsequent series of interviews and psychological evaluations showed the kind of field operative that the SIS were looking for in the modern age. And so she was recruited into British Intelligence.

Bond looked around the hotel room and was slightly disgusted with Miss Moneypenny’s choice of accommodation for him. The late fashion icon Gianni Versace was not known for subtle design and this room, with its reproduction Louis XVI furnishings and bright yellow, red and purple curtains, was a veritable assault on Bond’s sense of style. Well made, but not to his taste at all. However, with the NATO Summit taking place the next day, he reasoned that all major hotels in Paris were probably booked solid and filled with visiting politicians, military personnel and the media. This was perhaps the best that Moneypenny could secure for them.

He looked back at the ties. Without another moment’s thought, he snatched up the one with the interwoven crosses. The one she had bought for him. With decades of practice, he swiftly tied it into a Windsor knot around the collar of his white Ascot Chang two-ply Egyptian cotton shirt. He tucked the shirt into the waistband of the charcoal-grey flat front trousers that he’d had tailored by Huntsman’s on Savile Row a decade ago. The quality of every panel, cut and stitch in the garment meant that these trousers still looked in pristine condition. Bond was recently told by another tailor that this was the last item of clothing that Huntsman’s produced before the company was sold to new owners who didn’t share the bespoke tailoring house’s founding philosophy. He then scooped his Omega Seamaster wristwatch off the bed-side table, slipped it over his knuckles and fastened it around his wrist. Bond glanced at it briefly. The dial showed 2:04pm. Time enough for a quick lunch at a nearby café before their meeting with Fairchild at the embassy to discuss tomorrow’s arrangements.

The bathroom door opened. Monica Purdey strode with a casual confidence from the room, followed by a thick curtain of steam. She wore a padded silk hotel bathrobe with a color pattern that mimicked the curtains. Bond winced at the sight of it as she crossed the room, roughly drying her dark mane of hair with a small towel. She sat down on the padded three-seater sofa that was positioned near the open French doors that led onto a small balcony overlooking the River Seine. The sofa’s Chesterfield design seemed out of place amidst the 18th Century French Royalty-themed furniture of the rest of the suite, but its garish mix of bright colors and trademark Versace Greco-Roman motifs made it look right at home. The room itself had a view across the river where the Hotel Imperiale was situated. Bond would have much preferred a room there. He turned to look at Purdey.
“Good God, that robe!”, he complained.
“Should I take it off?”, she replied, raising an eyebrow.
“Could you?”
Before she got her hand on the robe’s belt, Bond was already seated next to her. His mouth edged towards hers and they kissed. It was a long time since James Bond had encountered a girl like her. Two days after they had met, she had saved his life after Markov’s latest attempt to kill him. In a small boat on the Amalfi coast, it was Purdey’s quick thinking that had greatly minimized the poison’s effect, allowing the paramedics back on shore enough time to get Bond stabilised. He spent eight days recovering. Monica Purdey visited him every day. They made love the night he had been discharged from the hospital in Italy four days ago. And they had barely stopped since.

Purdey. The association between her name and that of the esteemed English rifle manufacturer was not lost on Bond. She too possessed equal measures of both elegance and ferocity that he found all too alluring. She was like no other female he had ever met.

Bond pulled away from her briefly, interrupted by the sound of fluttering wings, and he turned slightly to see a pigeon land on the balustrade outside.  Paris was indeed riddled with these birds, he thought. His focus shifted instantaneously to the distance beyond the balcony as he saw a bright flash of orange flare from a fifth-floor window of the Hotel Imperiale 180 metres across the water. A dark cylindrical shape left a thin plume of white smoke in its wake as it hurtled straight towards the balcony of Room 417. In the split-second from the moment Bond saw the rocket-propelled grenade fired to when he acted, a variety of thoughts raced through his mind; was it Markov? How did she find them? Would he and Monica survive?

However, the main question in his head concerned the sofa he and Purdey were seated on. He hoped that the exorbitant prices this hotel charged were reflected in the build quality of this gaudy reproduction furniture.

People often comment after life-threatening experiences that they seem to occur in slow-motion. Bond was no different. To him, it felt like it all unfolded with an agonizing stillness and he heard no sound except the rush of blood pulsating through his skull.
With his left hand, he pushed Purdey off the Chesterfield and onto the floor. She let out a quick “Ow!” as she fell and he caught a brief flash of her emerald eyes lit up with confusion as his right hand gripped the back of the sofa and he heaved with all his strength.
Before the three-seater rolled over and capsized, Bond took another glimpse at the RPG-7 projectile heading straight for him. He hunched his body low as he brought the sofa down over Purdey and himself, seeing a grey blur as the pigeon took flight from the balcony’s edge.  Bond’s elbows and knees hit the floor hard and he snaked his arms around Purdey tightly, the back of her still-damp head in the palm of his hand. 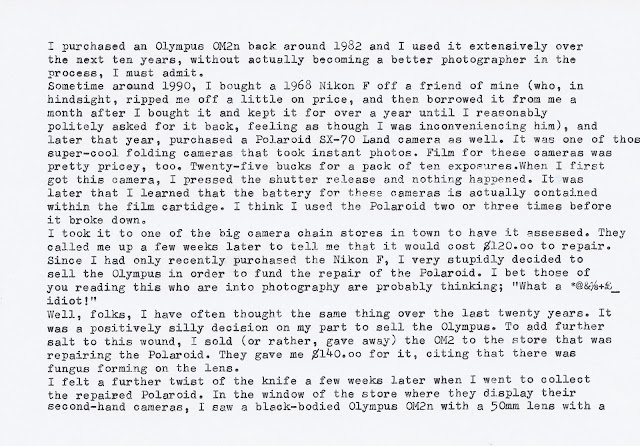 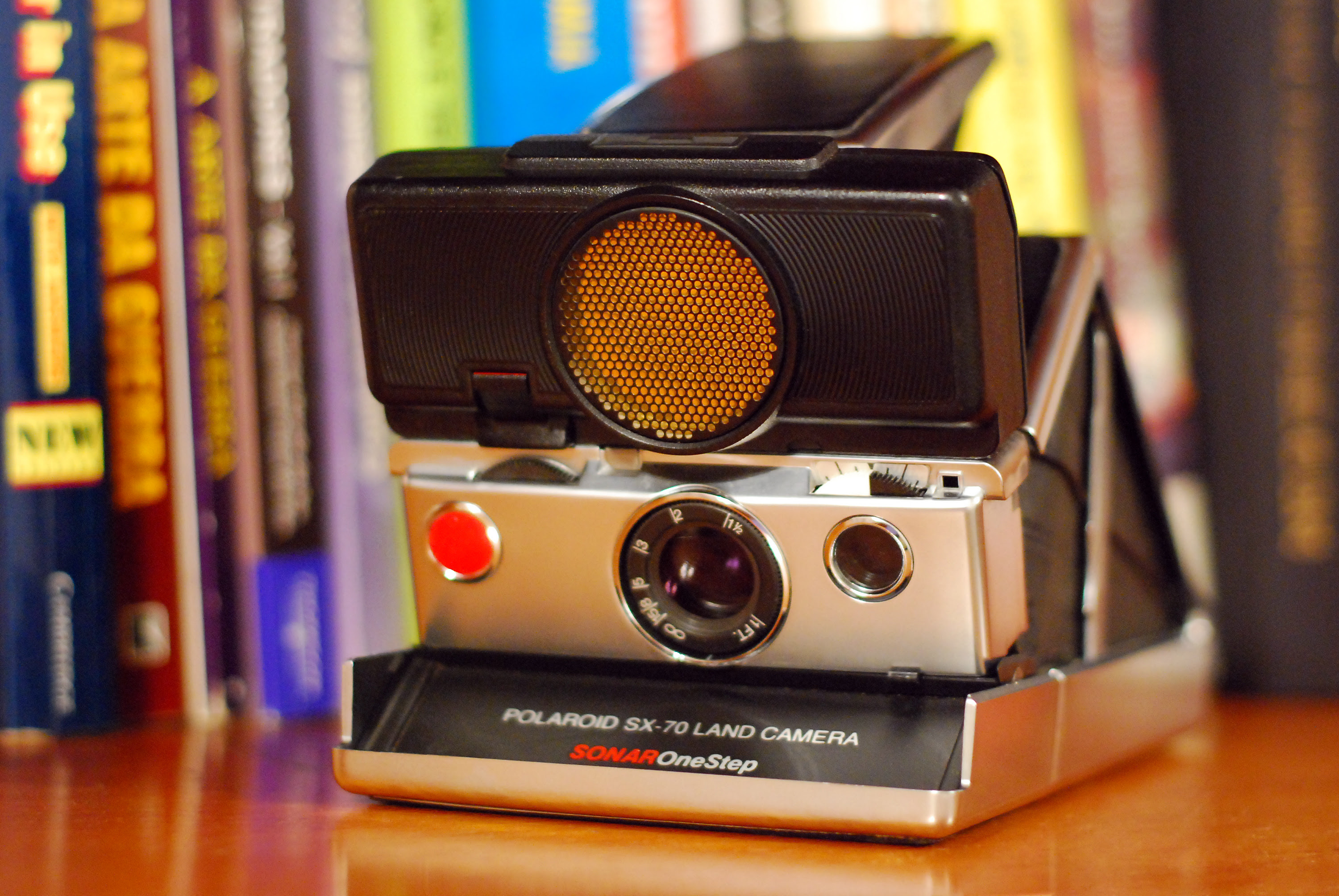 This Polaroid SX-70 is like the model I had. Nifty to use, especially when you see the photo instataneously ejected from the front of the camera and watch it develop before your eyes. But, it's hardly a professional photographic camera, despite its status as a classic camera design. Very popular among the more artistic types these days because you can manipulate the photos as they develop and wind up with some interesting effects. 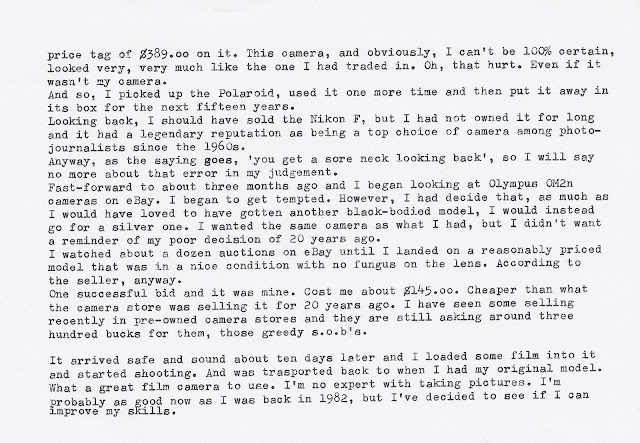 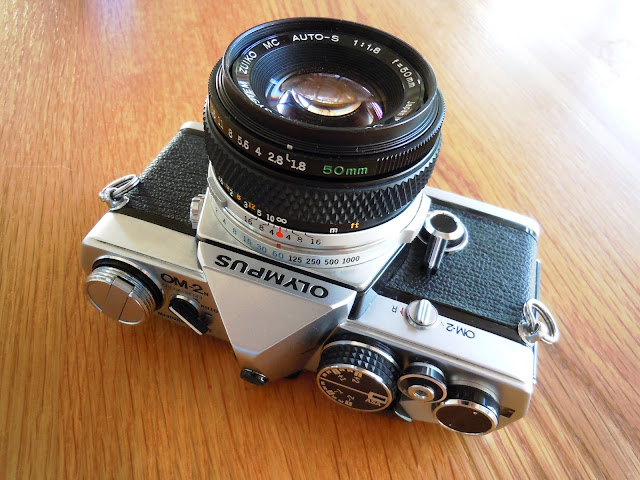 The rubber grip on the lens provides nice and smooth operation of focus. 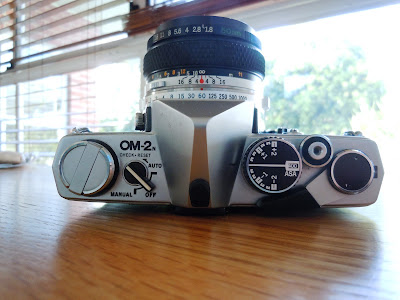 The Auto or Manual settings are within easy reach. Like a lot of SLR cameras of the era, all relevant controls are all that is needed. 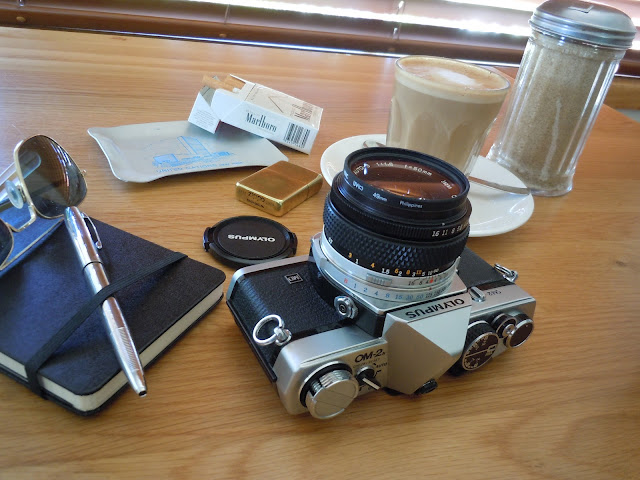 As good as it is to use, it even looks great just sitting on its own. 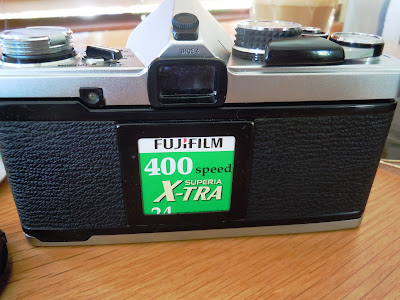 I've always been a fan of these little film pack stub holders that some brands included on the camera backs. I'm forever forgetting how many exposures I have loaded into the camera. 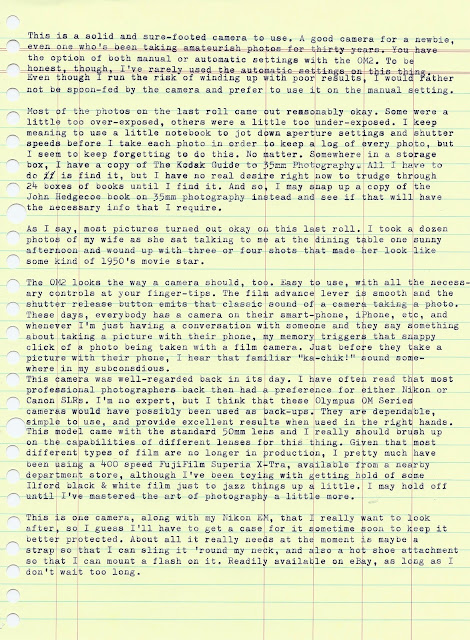 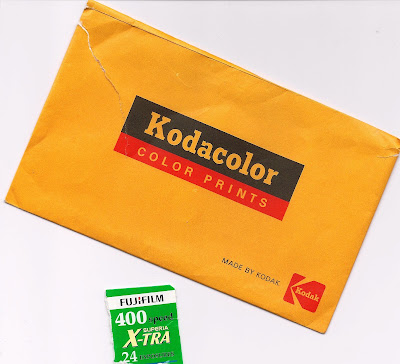 I was saddened to hear of the demise of Eastman-Kodak. It was one of those companies that I thought would be around forever. And, of course, the Kodak logo was one that I  had seen all my life. It's a shame that Kodak didn't manage to succesfully grasp digital technology. Given that they were the company that came up with the affordable Brownie cameras back in the 1900 (I think?), it's a wonder that they didn't try to replicate that success by making an affordable digital camera for the masses.
Lately, I've been using Fuji film, but I might try to source some black & white film off eBay soon. 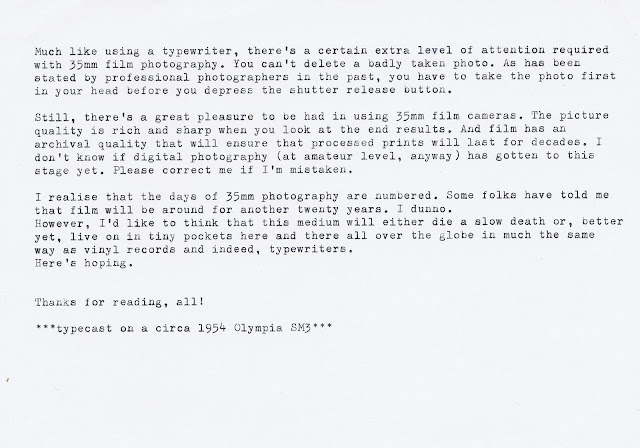 One more for atmosphere... 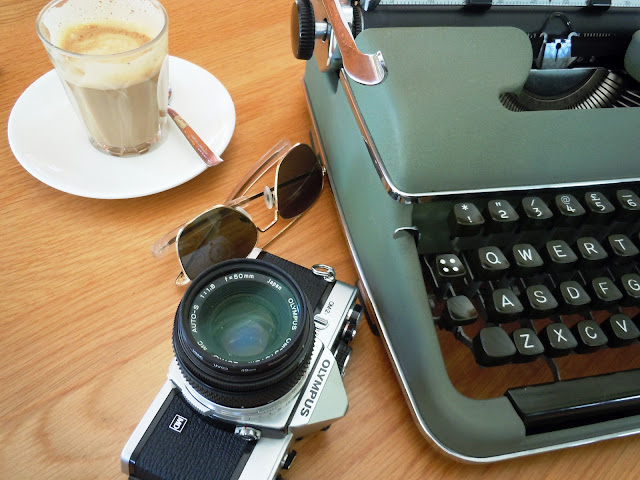