Four Weeks (More or Less) Till Christmas & My Recent Wristwatches 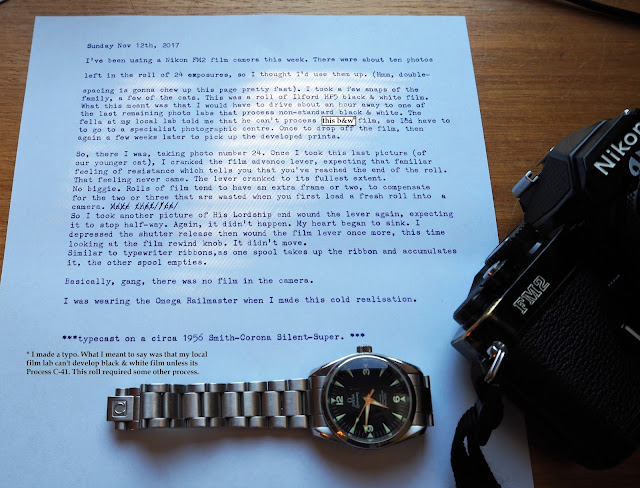 Mr B continues to have us all working at his beck and call. Madame still hisses whenever he's near, although I've been told by my family that these two cats will often approach each other and sniff each other's noses. And then the older cat hisses at him. Something tells me it’s always gonna be this way between these two, but I live in hope. 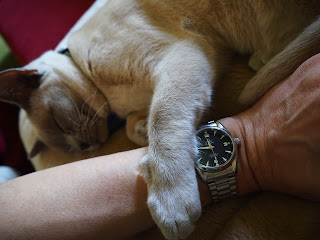 Work is getting busier as we rush towards the end-of-year holiday season. The watchmaker and I are basically in a 'putting out fires' mode. We work on current repairs, and if we get a call or e-mail about an urgent one, we focus our attention on getting that one done and out the door before moving back to the current repairs.
We've had a few customer call with unrealistic expectations at this time of year. Some folks think that it only takes a few weeks to get their watches repaired. And everybody's wanting their watches fixed in time for the holiday season.

Anyway, I just gotta get through the next four weeks. Then I'll have about ten days to refresh my batteries before getting back into the thick of it in 2018. 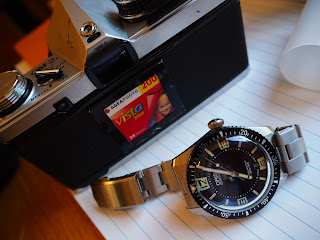 Switched over to the Oris Diver SixtyFive. Made damn sure that the Olympus OM2n had some film in it, too. Now, if I can just find the inspiration to take some pictures.
I'm feeling a little too tired these days. That shoulder blade and neck pain that I was experiencing recently has been very well sorted out by my physiotherapist, although I've now got some rotator cuff issues that need to be dealt with. Still, slowly slowly. 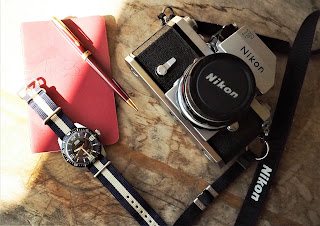 Took the steel bracelet off the Oris and put a NATO strap on it instead. I managed to fluke things so that the cream-coloured stripe on the strap matches the colour of the lume on the dial.
Haven't used the Nikon F for quite a few years. Think I'll thrown some film into that one when the OM2 is done with. 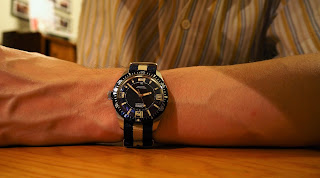 Still had the Diver SixtyFive on my wrist. I'll have to get a rubber strap for it at some point, just to make for a comfy fit on warm days. It's been hot and sunny here in Melbourne this week, but the weather took a humid and muggy turn late yesterday. I have to say I don't like humidity. Actually, I don't mind it when I travel to places like Bangkok, but I'm no fan of it here in my home town. I think we're gonna have to look into some kind of roof-mounted air conditioner at some point in the next few years. 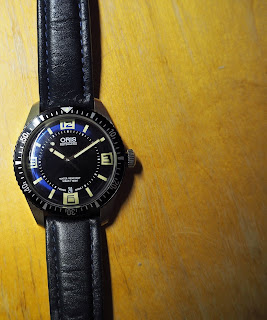 Okay, so I just removed the NATO strap and fished this ZRC blue leather strap out of my straps box. If you get into having a few wristwatches, you tend to find that you accumulate quite a few straps along the way. I've used this strap on other watches in the past, most notably the Omega Seamaster Professional 300m, but I always revert back to putting the original bracelets back onto watches.
I think that, as an exercise, I'll leave this strap on this Oris watch for the next month or so and see how it holds up. I'm actually hoping that it begins to deteriorate. I have too many straps, you see.
Yep, let's put this strap through its paces. See how long it lasts. From memory, I think I got it back in 2005/2006.
Yep, I think I'll hammer this one.

Anyway, that's another week down. As I've said, things are busy at the moment. I wrote some postcards to relatives in Italy and I'll be posting them this weekend. Still got one or two more to write.
Thinking of putting some stuff on eBay too. Well, I've been thinking of putting this stuff on eBay for a while now. Might thin out the typewriters. And the old rotary phones. Maybe a camera or two as well.
I'll see if I can get another couple of posts done before the new year.  I hope you've all been well.

Have a good weekend, and thanks for reading!

Six Weeks (Give or Take) Till Christmas & My Recent Wristwatches.

Oooh, boy, am I tired lately. Work's gonna continue to get busy between now and when Santa comes down our chimneys.
I don't know how long or short these posts of mine will be as we head towards the end of the year.
Anyway... 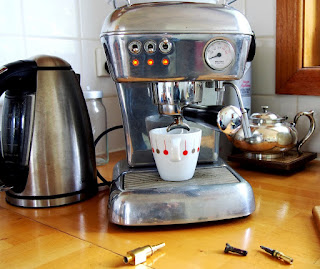 Our old faithful Ascaso Dream  coffee machine was on the fritz again. Probably due for a service. My wife brought it to the repairers and they got back to us ten days later to say that the boiler had gone and would require replacing. That was gonna cost us about $250 bucks.
Well, this machine has been good to us over the last eight years, but I didn't feel like shelling out that kind of dough to get it fixed. My wife and I
had a quick huddle (well, we texted each other about it) and we decided that we'd rather put $250.oo towards a new machine. Now, I was all for getting something semi-industrial, but A) that would have been a circa three thousand dollar machine, and B) there's just no spot in the kitchen where a machine of that size would work comfortably. 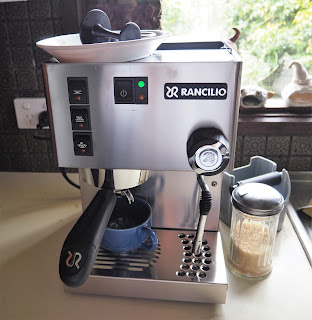 So, we did a quick search on the 'net and landed
on a Rancilio Silvia Model No. 5.
I had used Rancilio coffee machines during my time in hospitality. Now, I'm no expert on industrial coffee machines, but I've always been happy behind the wheel of a Rancilio or Faema machine.
Anyway, this one has full-sized group handles (the part that you put the ground coffee in) and a  250ml boiler. The steamer wand has plenty of pep and it'll froth up some milk for a couple of lattes in about ten or twelve seconds.It's definitely a step or two up from the Ascaso.
I've written about coffee before;

So I won't go into it all again now.

Okay, wristwatch-wise, here's what I've been up to; 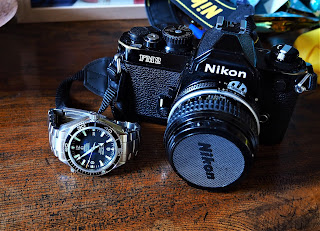 The Omega Seamaster Planet Ocean got a decent run early in the month. I've still got some black & white Ilford HP5 film loaded up into this FM2 that I need to finish up. Then, because this film requires a particular processing...uh...'process', I'll have to trek across town one Saturday morning to drop it off for developing. I have another roll of it somewhere and I can't remember what photos I actually took with this film. I hope they're worth it.

I've been slowly going through some older posts and replacing my Photobucket ransomed pictures with replacements from my hard drive. This. Is. Gonna. Take. Some. Time.

Switched over to the Enicar Ultrasonic last weekend before preparing an elaborate pasta sauce from a book about Lygon Street; 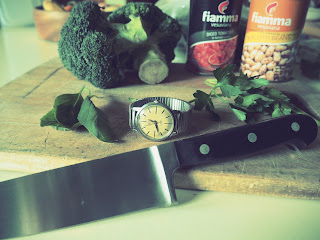 It's a great book, covering the history of the street, which was considered a dangerous slum fifty years ago before it became Melbourne's Little Italy. The chapters are interspersed with recipes from many of the restaurants that are still in business there today.

The recipe I used was for a casalinga (home-style) sauce which consisted of broccoli, diced tomatoes, beans and various spices. I made too much of it and I later contemplated adding a little water and stock to it and turning it into a soup.
Of course, this was last weekend and I'm now thinking that it may be a little too stale to try anything fancy with it. Perhaps next time.

Wore the Longines Expeditions Polaires Francaises Paul-Emile Victor for most of the week; 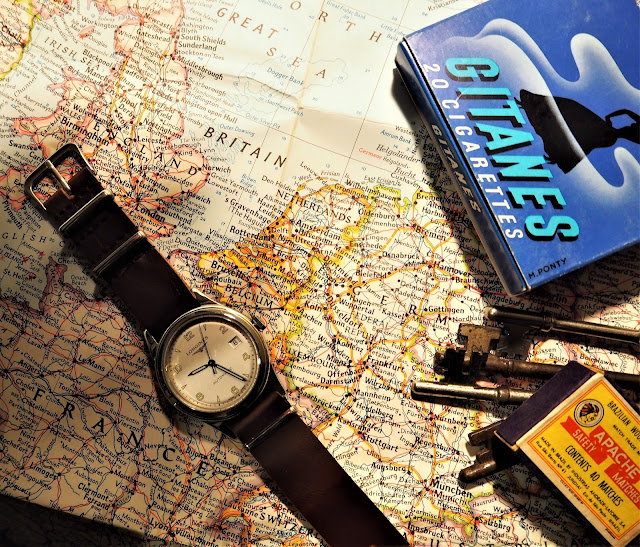 I took it off its lizard-skin strap and put a cheap vinyl NATO strap on it. This made for a very comfy fit and feel, but I couldn't stand the fact that I was wearing something that felt so flimsy. This was not an expensive strap. I think I paid about ten bucks for it, so I imagine that I knew it wasn't gonna be real leather when I bought it. Still, it's good to try it out, so that I can later decide if I'd go for a genuine leather version of it.

And today, I wore the circa 1962- don't know why I keep referring to it as 'circa' when I'm fairly certain that it is from 1962- Seamaster. I bought an after-market bead-of-rice bracelet for it and spent too much time adjusting and hacking away it it until I got it to fit my wrist. 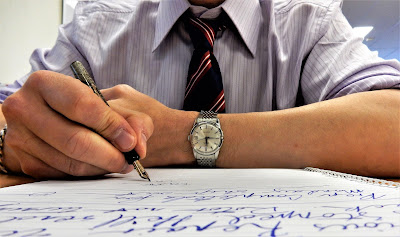 This shirt has been in its original packaging for the last five or six years and I finally decided to bust it open and wear it to work this morning. It's my correct size, but it has a generous fit. I've gotten used to a slimmer fitting shirt in recent years and really didn't like the way this shirt sat on me. Looks like I'll be washing and ironing it before I take it to a nearby Op Shop (thrift store). I'm hoping it'll get snapped up pretty quickly, because it's a nice cotton with a pleasant weave in an agreeable shade of lavender.
Oh well... 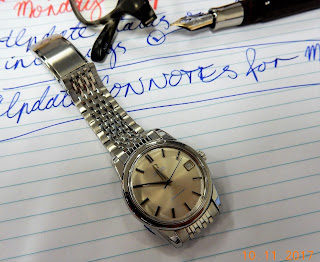 And that's it, gang. As I said at the beginning, work is getting busier, and my aim is to get as much done as possible before the holiday period in late December.
Anyway, it's now around 9:45pm and I'm retiring to the lounge room.
Here's a close-up of today's watch.


Thanks for reading, have a great weekend!