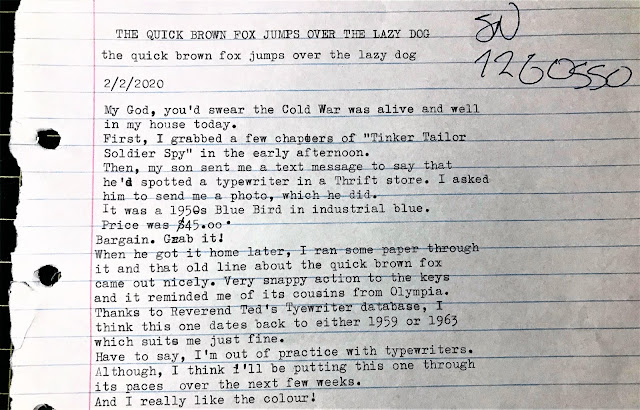 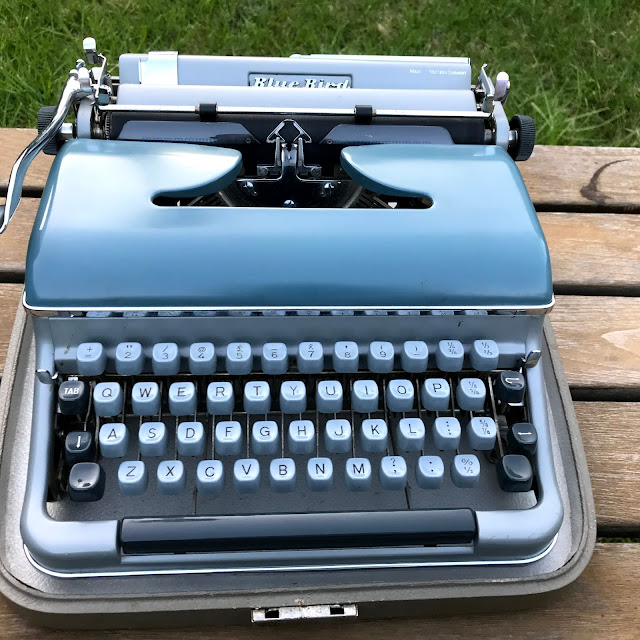 As with just about any typewriter of this era, the rubber feet, on both the machine and the carry case, have hardened and perished, so I'll be looking at replacing those at some point if I can get hold of a thin sheet of rubber. For now, placing the typewriter on a rubber mat does the trick, preventing the machine from veering off to the left as you write. 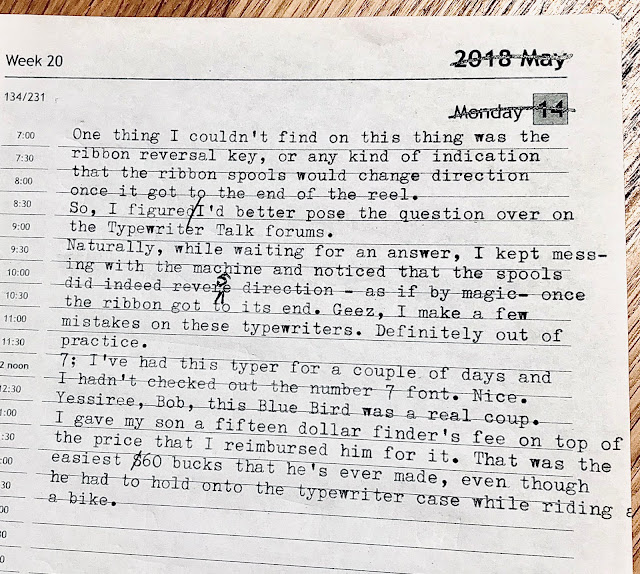 The ribbon is pretty faded, although it does give an even imprint on the page. Thankfully, it's a 12pt font, which I prefer to the larger 10pt. Once I load it with say, a purple ribbon, it'll be a very nice typewriter to use.

I had looked at these Blue Birds and Torpedoes from time to time on eBay, thinking that they'd be a nice typewriter to have. Although, I didn't really need another typewriter, but this one came along at such an easy price (in my neck of the woods) that it was difficult to say 'no'.

I was wearing the circa 1969 Seiko Skyliner when this typewriter arrived. 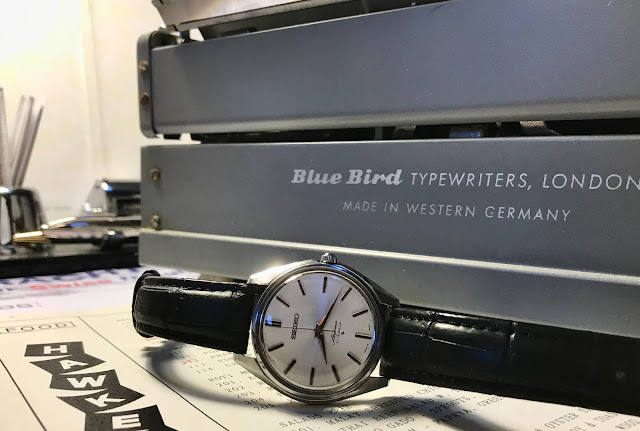 I've gotten back into the reading kick lately. Took me some time, I must say.
My son read a World War I memoir by German author Ernst Jünger called Storm of Steel. He bought it from Shakespeare & Co when we visited Paris back in 2016.
Once he'd finished it, he recommended it to my wife and I. I began reading the book and it took me about six months to finish it. It wasn't a bad book. Far from it. Jünger writes very well. For me, the problem was that it was a memoir and his writings of daily life in the trenches of No Man's Land, while very interesting, were repetitive. Constant shelling from the enemy, night-time infiltrations across battlefields into potential enemy territory, skirmishes from one French provincial town to the next. I began to lose track of what had happened whenever I'd pick up from where I had left off.
However, it was a memoir, so it was probably bound to show the Groundhog Day elements of the life of a soldier in this war.
Despite that, I would recommend this book.

After finishing it, I decided I'd stick to wartime fiction and read a couple of Alan Furst's books. He's written a lot of novels set in pre-War Europe and he does write a nice character.
Then, about three weeks ago, we went out to an Argentinian restaurant for dinner. It was to (belatedly) celebrate our son's birthday. We all had a nice meal and then went for a short walk in the city.
We stopped in at The Paperback, a tightly-packed bookstore at the top end of Bourke St that I discovered back around '86. I had a quick scan through the fiction shelves and was contemplating buying a copy of The Portable Dorothy Parker when I spotted a book by a fellow named Mick Herron. It was called Slow Horses and it was about a lowly sub-branch of British Intelligence where failed agents had been shunted off to, to perform menial tasks like reading transcripts of phone text messages and other crappy jobs.
This misfit, rag-tag bunch pretty much hate each other and their boss is a guy named Jackson Lamb, a belching, overweight, unkempt has-been agent who pretty much keeps to himself in his own office.
And then, a young man is kidnapped and his captors announce online that he will be beheaded in 48 hours and the footage will be streamed across the web.

I had heard about Mick Herron on a podcast called Spybrary, where it was suggested that he'd be a good Bond continuation author. Whether or not that's true, once I read the blurb on this back cover, I was sold.

I wore the Oris Movember Edition Divers SixtyFive at some point; 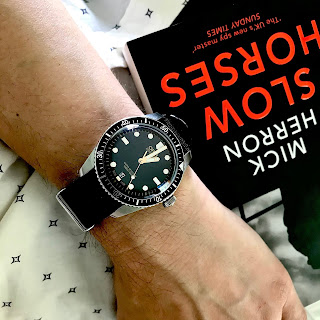 Very comfortable on a nylon NATO strap. Regarding Slow Horses, it moves along at a good clip, and it does tend to have a cinematic feel to it, in terms of its structure and the way that the story unfolds. Although, in some ways, it seems unfilmable.
Still, it's a much more competently put-together story than some books I've read which contain very clichéd characters and situations.
I stopped reading one thriller, even though the premise was interesting because, aside from the clichéd main character, the second or maybe third chapter began with a the introduction of a female senator who's having an affair with a young intern. She's in her mid-50s and looks good for her age. She's using him because he's 27 and has a young man's stamina between the sheets. He, of course, is using her in an effort to get ahead in the corridors of power in Washington. It felt like an episode of some B-grade TV drama. As I get older, I have less patience for books, TV and movies that start to disappoint me. Too much good stuff out there to waste time on crap.
And I ain't gettin' any younger, hepcats.

I've read recently that a TV series of Slow Horses is in the works, and I think in some ways,  it'll test the ingenuity of the people involved. Be interesting to see how it shapes up.

Onto more spy-related stuff. Courtesy of the newly-arrived Blue Bird. Gave it a good run with the page below and I'm very happy with how it writes.
Anyway... 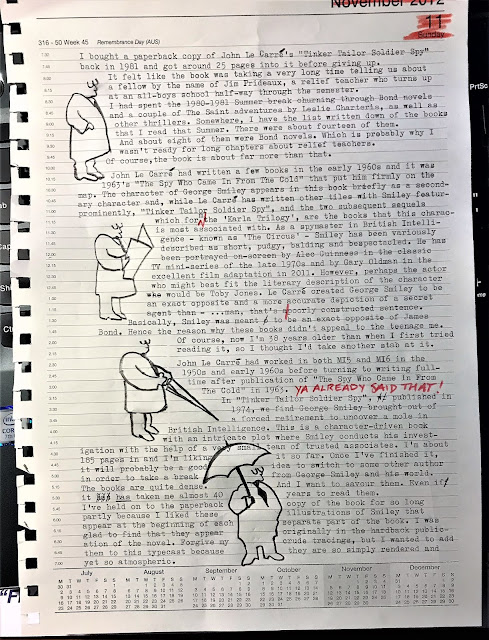 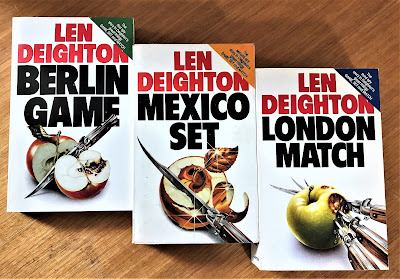 I've had these three Len Deighton paperbacks since the mid/late 1980s.
They form the "Game, Set & Match" trilogy, which concern the exploits of a British Intelligence operative named  Bernard Samson. He spends almost as much time dealing with inter-office back-stabbing as he does at Checkpoint Charlie.

Don't ask me to tell you what happens in these books because I read them over thirty years ago. As luck would have it, I saw all three of these in hardcover at a local Thrift store and decided to snap them up. A week later, I took the paperback copies in. No point holding on to both.
Always loved the cover art of these. They were from a time when Len Deighton's works could be found in any bookstore. And, much like some of the Robert Ludlum paperbacks from the same era - when the author's name was printed on the cover in almost as large a font as the title - the back covers would offer a brief premise of the story along with snippets from reviews of the author's previous works. 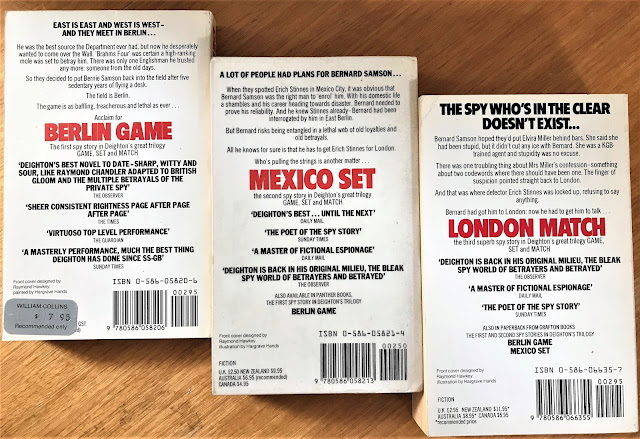 Deighton, who turns 91 today (18th Feb) went on to write two more trilogies featuring Samson, but he has been a prolific writer for almost sixty years, having begun his novel writing career in 1962 with The IPCRESS File, which leans more towards the work of Le Carré than Fleming.
Like I said earlier, I love the cover art on these books. Done by the legendary Raymond Hawkey, who did some of the Bond paperback artworks in the 1960s, as well as the original hardcover art for The IPCRESS File.

Anyway we had a cold weekend here recently and it seemed like a good time to cover some books. It was one of those niggling little jobs that I've been putting off for the last five years or so. I have a roll of library-quality book covering plastic and I decided that some hardback novel dust jackets could do with a little protection.
And, since I seem to have my fair share of espionage fiction that could do with some TLC, I figured I'd get started with those.
Because every spy needs a decent cover. 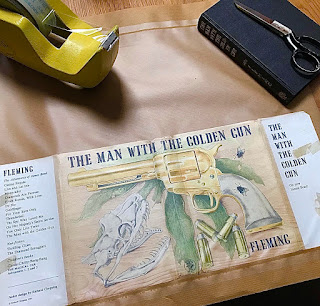 First cab off the rank was my first edition copy of The Man With The Golden Gun, featuring the wonderful trompe l'oeil artwork by Richard Chopping. This jacket has seen better days, so I was concerned about it possibly getting worse. Chopping's Bond covers always had a few recurring motifs running through them. Often, the items in the artwork were seen positioned on timber, showing the grain of the wood, and he (Chopping) seemed to have a fascination with flies, as they appear in a couple of the nine covers that he painted.  This one shows a gold-plated Colt Single Action Army, the weapon of choice used by Paco 'Pistols' Scaramanga, the freelance assassin who has a golden bullet reserved for Mr James Bond OO7.
I've written about these covers before. I love everything about them. The washed-out colours used, the often macabre arrangement of items, the pale timber backgrounds, and the inspired use of Cargo-Crate font for the text on the covers.
Some, like From Russia With Love or The Spy Who Loved Me are highly romanticised, instantly evoking Bond's world of sex and violence, while others, such as You Only Live Twice show something somewhat morbid and hint that the world of the novels is off-kilter. 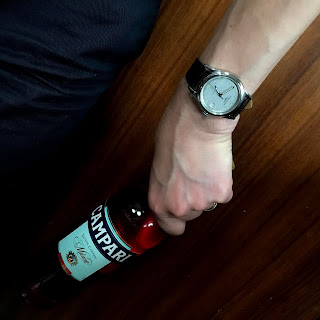 There have been a couple of occasions in recent years where I've thought about selling this one, but whenever I wear it, I'm newly impressed with the simplicity and clarity of the dial.
It's a clean piece.

The book covering continued, and threatened to get out of hand, as I kept going back to the shelves to get yet another book that could do with a little more protection. The roll of plastic that I have had been stored away for almost ten years. And now here I am, about to run out of the stuff.

Anyway, the three Deighton hardbacks got the plastic treatment; 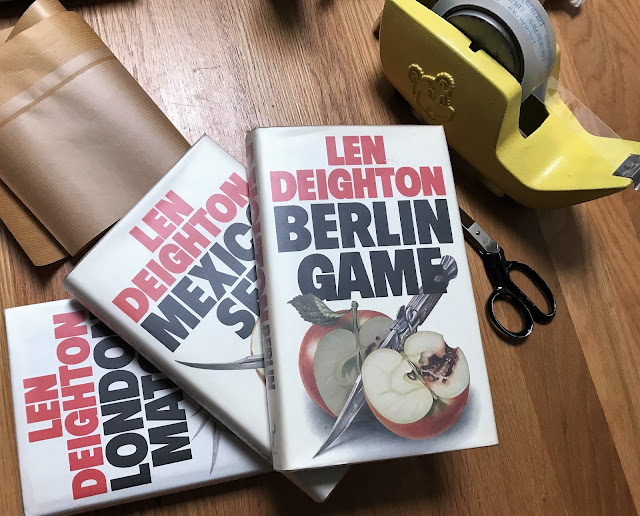 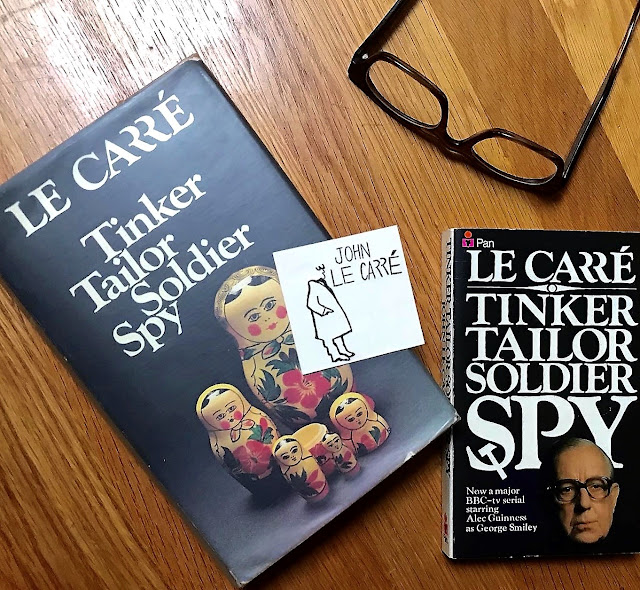 I can now finally get rid of the paperback version, that I've held on to since the Summer of '81. I even made a bookmark for it back then.
This post has taken so long that I've actually finished reading the book. As suspected, I was finally ready to read this novel and I enjoyed it quite a lot. Definitely deserves its status as a classic of the genre. And yes, it is a character-driven book and the characters are nicely realised.
I don't plan on reading the next book in this trilogy (The Honourable Schoolboy) just yet, as I'm still letting this first one settle.

Okay, I think I'll stop this post here. It's threatening to get much longer than I'd planned. I'll write a second part about the book covering, if any of you are interested, and that'll form the beginning of the next post, I suppose. 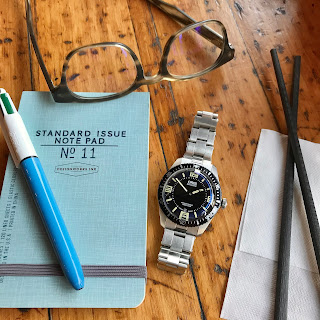 I wore the Oris Divers SixtyFive a few times throughout January. Here it is, in a small Japanese bistro where I sometimes go for a Yakiniku Beef bento.
I've gotten into a bad habit of buying my lunch a little too often in recent months. Anything decent and/or filling tends to cost about twelve bucks. Multiply that by five and that's an easy $60.oo gone right there.
My wife considers it a right waste of money and I tend to agree.  I'll go back to bringing in sandwiches or left-overs on a more regular basis.

I visited my dentist earlier this week and it seems that the root canal that I had done a few years ago has begun to crack and the tooth can't be salvaged. So, I'll be requiring a titanium implant. I have numerous items in line to sell, and a little bit saved in an account that I slowly sock money into each month. So, if I apply some tighter discipline with lunch, it shouldn't be too hard to get the funds together over the next three to six months.
I've stopped spending on coffee at work ever since we got a Nespresso machine in the office. Not my ideal, but A), it doesn't cost me anything, and B), I'm drinking a little less coffee throughout the day. Most days, anyway.

Anyway, more about that in my next post.
I hope you're all well, and thanks for reading!