Friday, 3:15pm AEST
Last Saturday
It was my birthday, so the kids came running into the bedroom at some ungodly hour (probably 9:00am) to give me my presents/gifts; 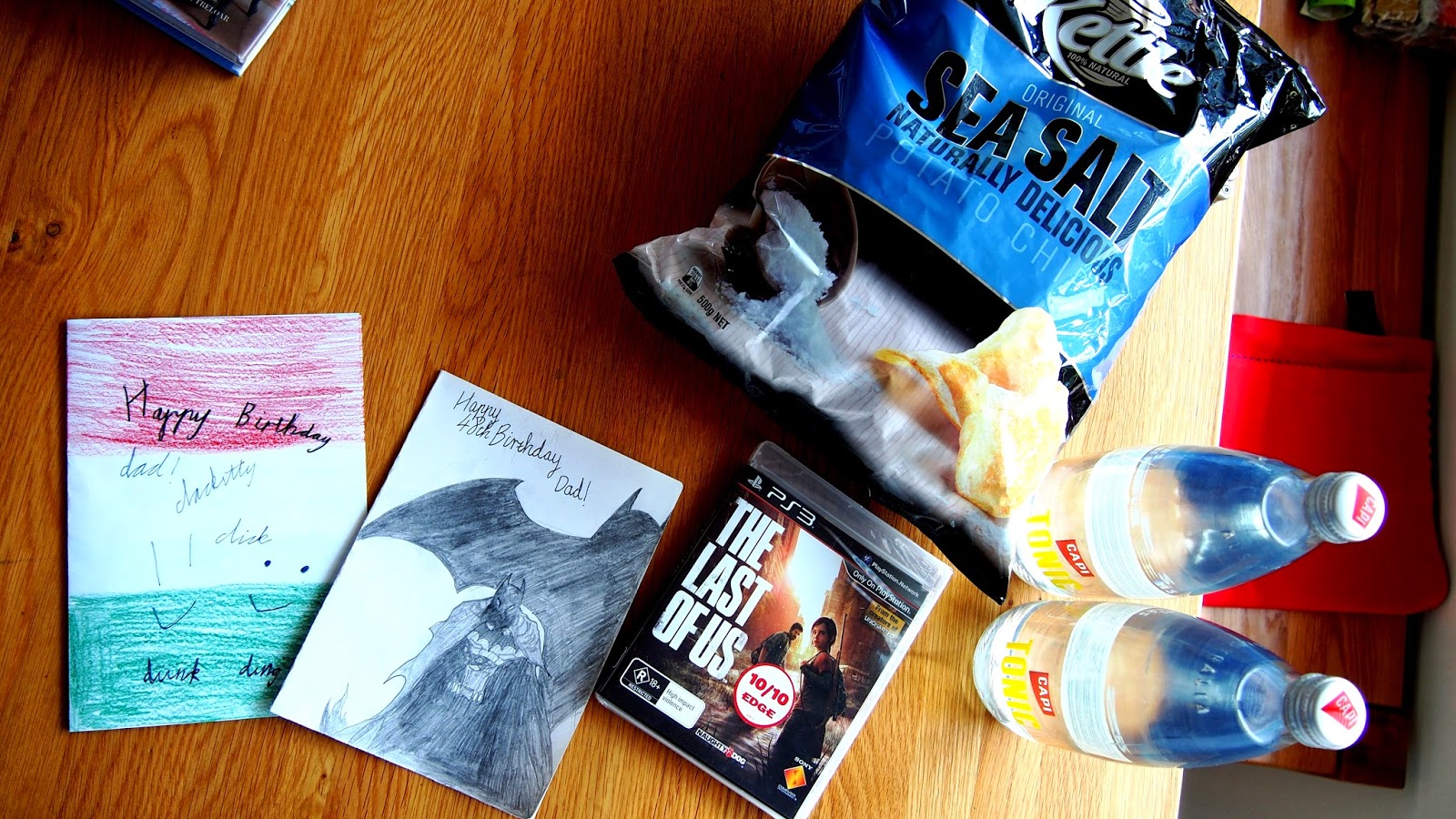 It'll take me about six months to get through that bag of Kettle Chips. The bag is just slightly smaller than the pillow on my bed.
The Capi Tonic Water will come in very handy, and I  played the first level of the PS3 game, "The Last of Us", later that night after the kids had gone to bed. I have to say that I don't normally go in for survivalist horror games. They can be pretty creepy, but this particular game has been very well-received in the gaming press.
I remember playing "Resident Evil 2" on the Playstation 2 many years ago and I had some very vivid and violent dreams before I decided that I didn't like that kind of game. Needless to say, I'll be playing this one cautiously. On my own.
I was touched by the effort that the kids put in to making the birthday cards. That would explain the mild swearing that I heard from my son's room the day before. Must've driven him nuts doing that drawing, so I admire the effort. And my daughter's card has a typewriter theme going on. Nice.
Later in the afternoon, I busted open the Tonic Water, wearing the Omega Seamaster AquaTerra; 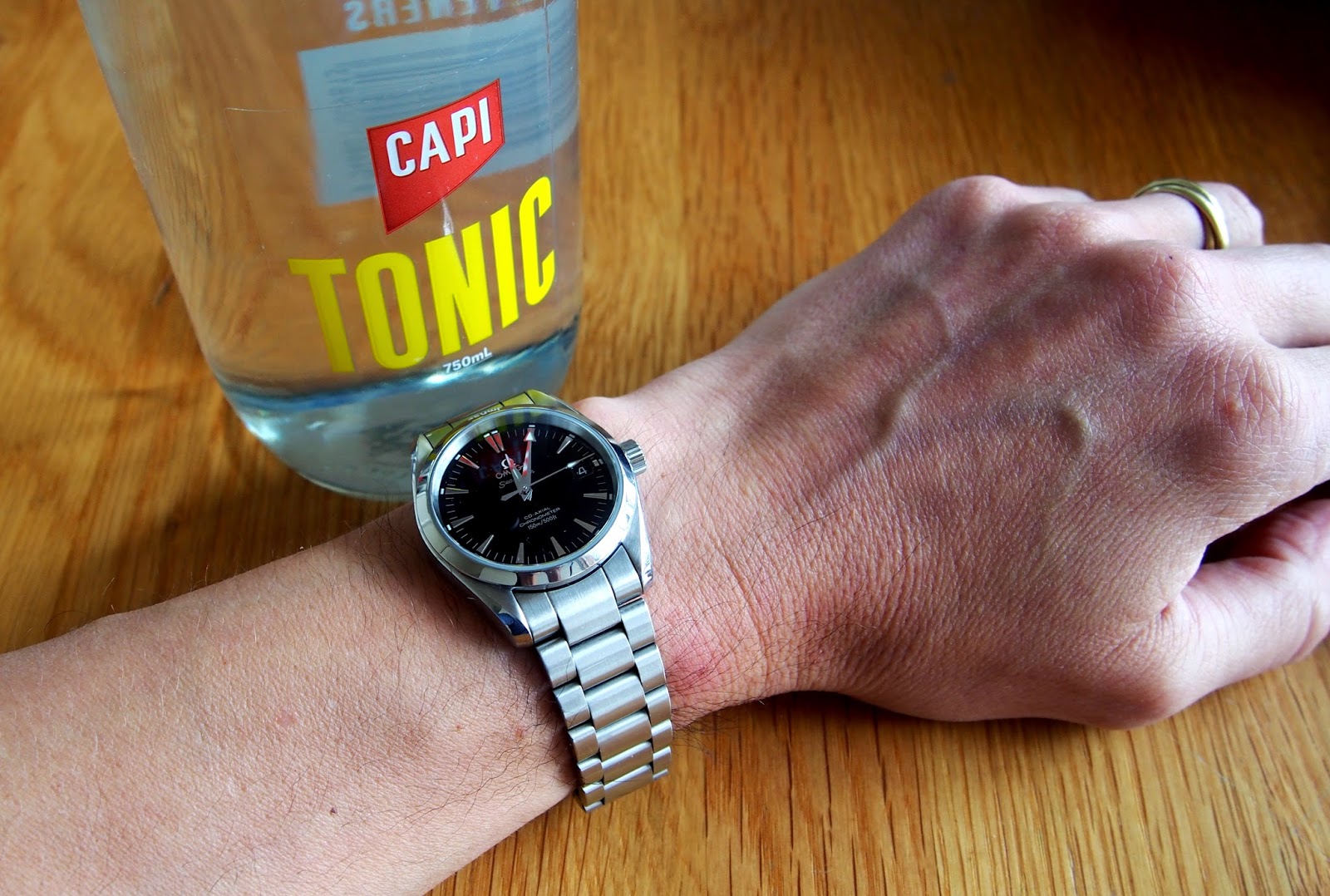 I love the label on this bottle. Very 1960. Perhaps I was waiting for Jack Lemmon or Audrey Hepburn to come around for a G&T.
We went out to Grill'd for a burger. We decided to go someplace local. The Christmas/New Year period was fairly low-key in our house and we continued the theme with a nice, pleasant family outing. It was a cool evening, weather-wise. And here we are, in the middle of Summer here in Australia. I wore my Hard Yakka Flying Jacket, which is based on the classic MA1 Bomber jackets that were first designed in the 1950s. I felt like Chuck Yeager.
Well, I had the Right Stuff on my wrist, at least.
The Omega Seamaster 300 on a TrueBond NATO strap. 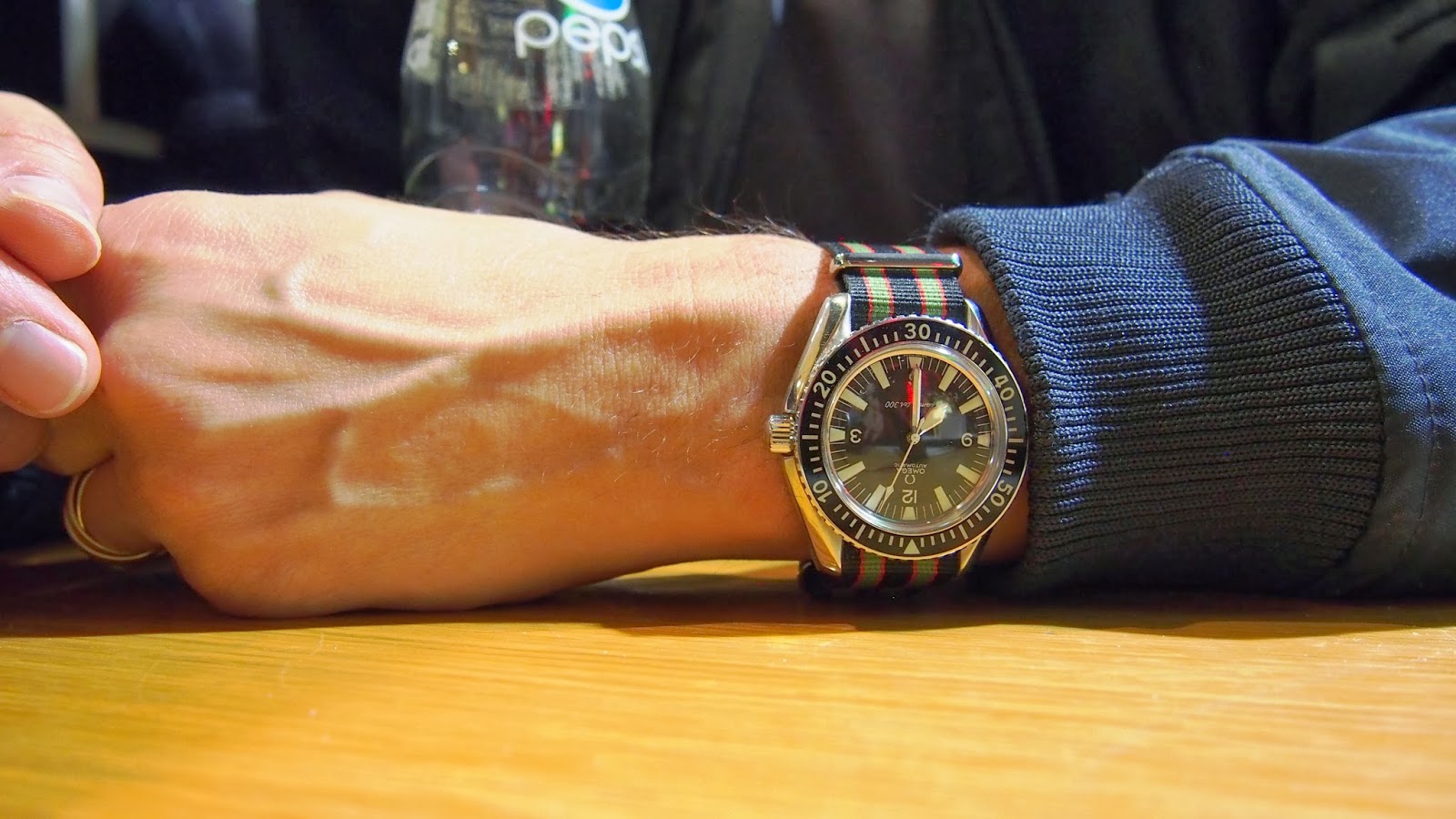 Felt a little bored that afternoon, so I got to work on one of these;

Monday Evening
Felt like a drink before dinner, It was time for an Old fashioned. The only bourbon I had was Slate. It's okay, I suppose, but I gotta get a bottle of something else. I'd switched over to the Omega Railmaster;

Tuesday
Some purple typewriter ribbons arrived from eBay. These are great. They make your writing look like carbon copies and, since I see enough black ink in newspapers, magazines and books, I'd decided to get some ribbons that had a little more colour. Might look at getting a few more of these and perhaps a blue one as well. Although, the blue ribbons do print a little lighter than I'd prefer;

Tuesday Evening
We all sat down to watch the last few episodes of the final season of "30 Rock". Tina Fey is a comedy genius and Alec Baldwin was perfectly cast as slick business shark, Jack Donaghy. The rest of the cast were superb. Tracy Morgan, Jack McBrayer and Jane Krakowski were wonderful throughout the seven-year run of the show. Given how much generic and predictable crap there is on the small screen, to say nothing of all the reality-TV garbage, this is one show that I'll miss, given that I don't tend to watch much TV these days. 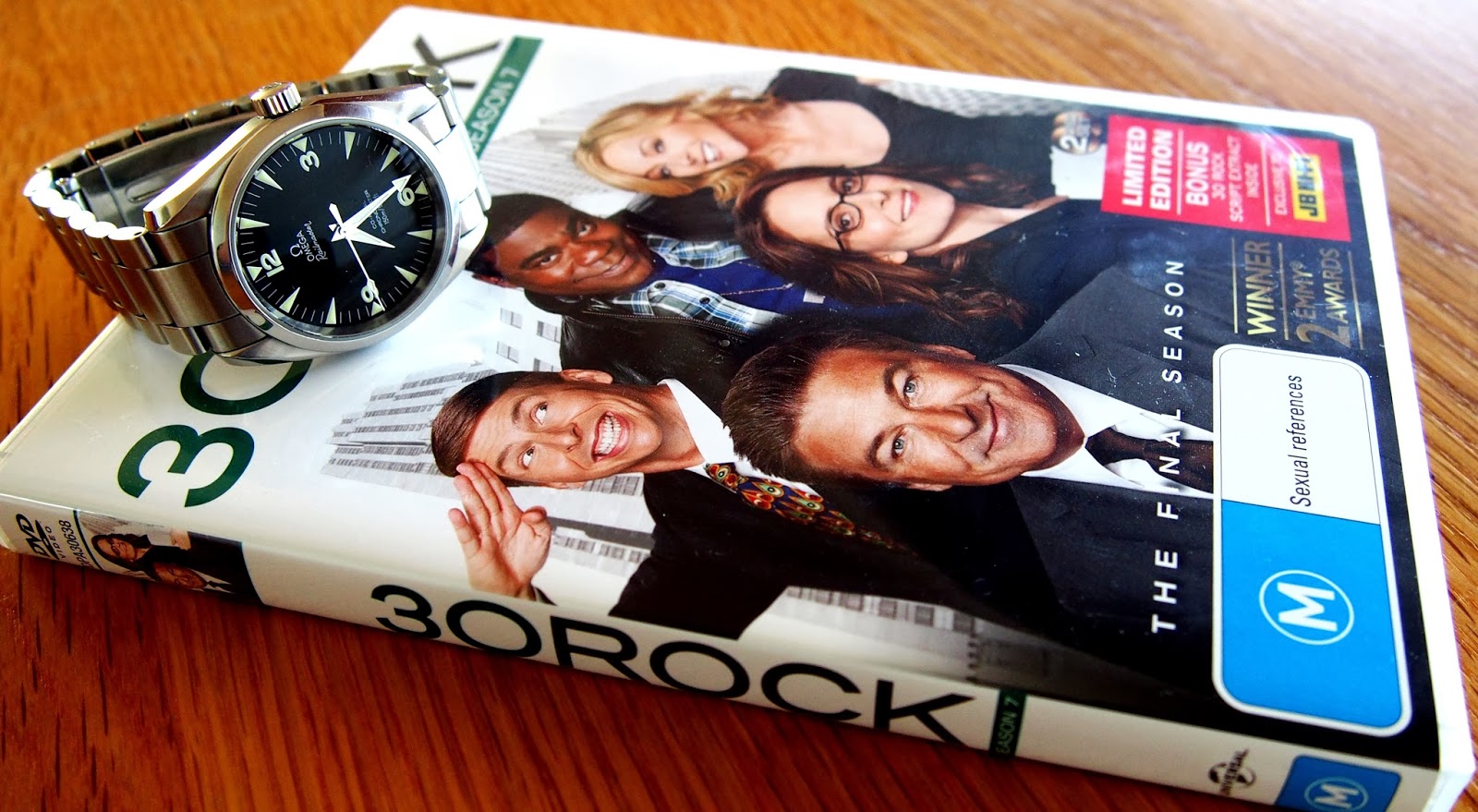 Thursday
Time to finish painting the garage door. However, the weather had reached a hot 30 degrees Celsius (Hello, Summer, did ya finally decide to turn up?). Still, that door wasn't gonna paint itself.
Switched over to the Seiko 7002. Didn't bother setting it to the correct date; 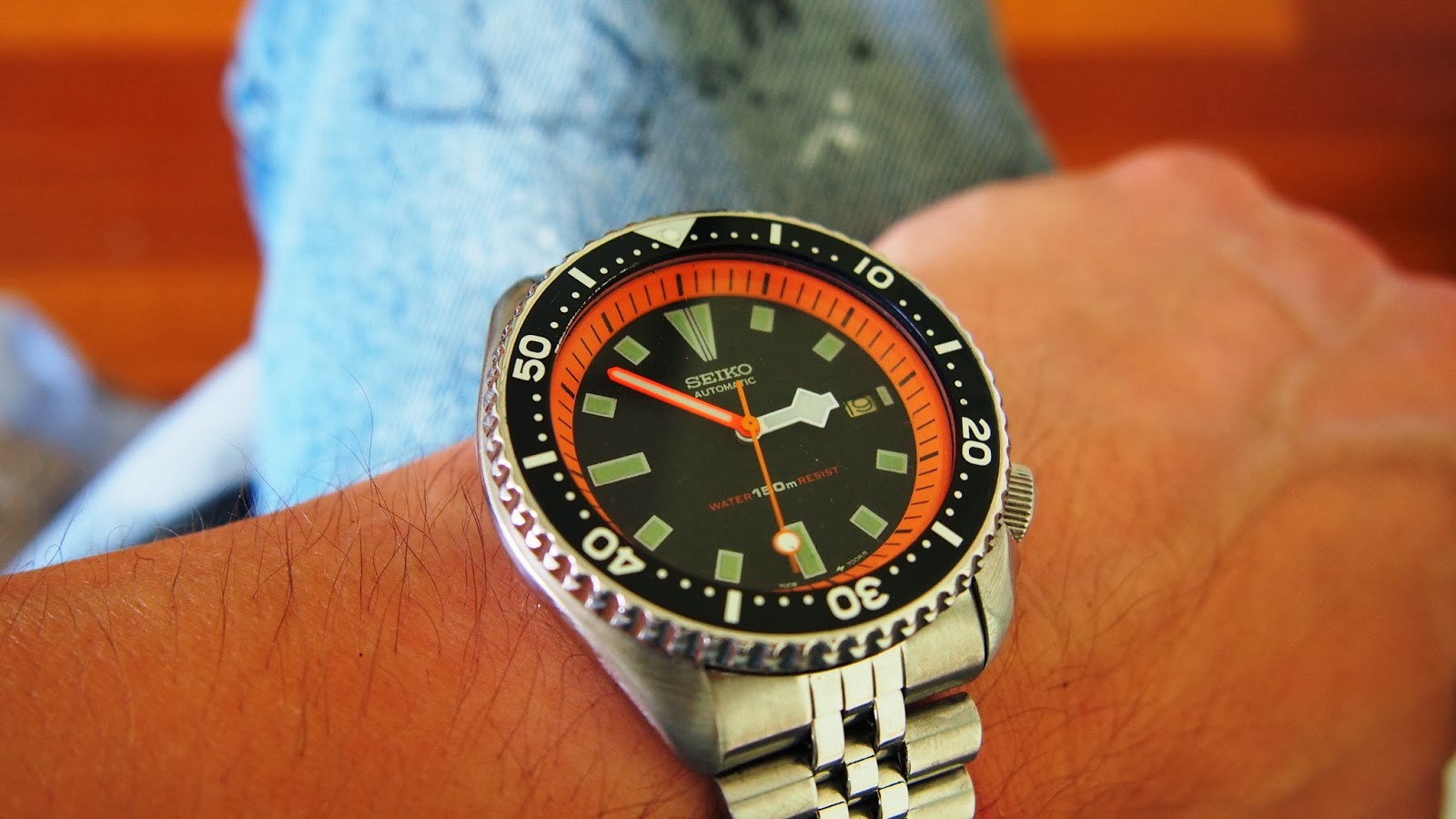 Man, it got hot out there! Finally. Later that night, it was Gin & Tonic o'clock and I switched to the Sinn 103;

Today
It's currently 33 degrees Celsius as I write this. I'll be heading out later this afternoon. My cousin called me earlier this week about going to the Designing 007 exhibition. As you may know, I've already been, but I haven't seen my cousin in over a year, so this'll be a good chance to catch up. I'll be switching to more tropical attire. A pair of bone-coloured chinos and a light blue, short-sleeved cotton shirt with epaulettes to give me a slight Ian-Fleming-at-Goldeneye vibe. And, I'll switch over to a watch on a strap.
Normally over Summer, I tend to wear watches that have metal bracelets rather than straps. This way, the leather doesn't get undue wear-and-tear from perspiration, water, sun-tan/moisturising creams, etc.
However, tonight's watch is the Camy Club-Star, on a nylon NATO strap in red, white and blue.
Team USA! Rule Britannia! Vive Le France! 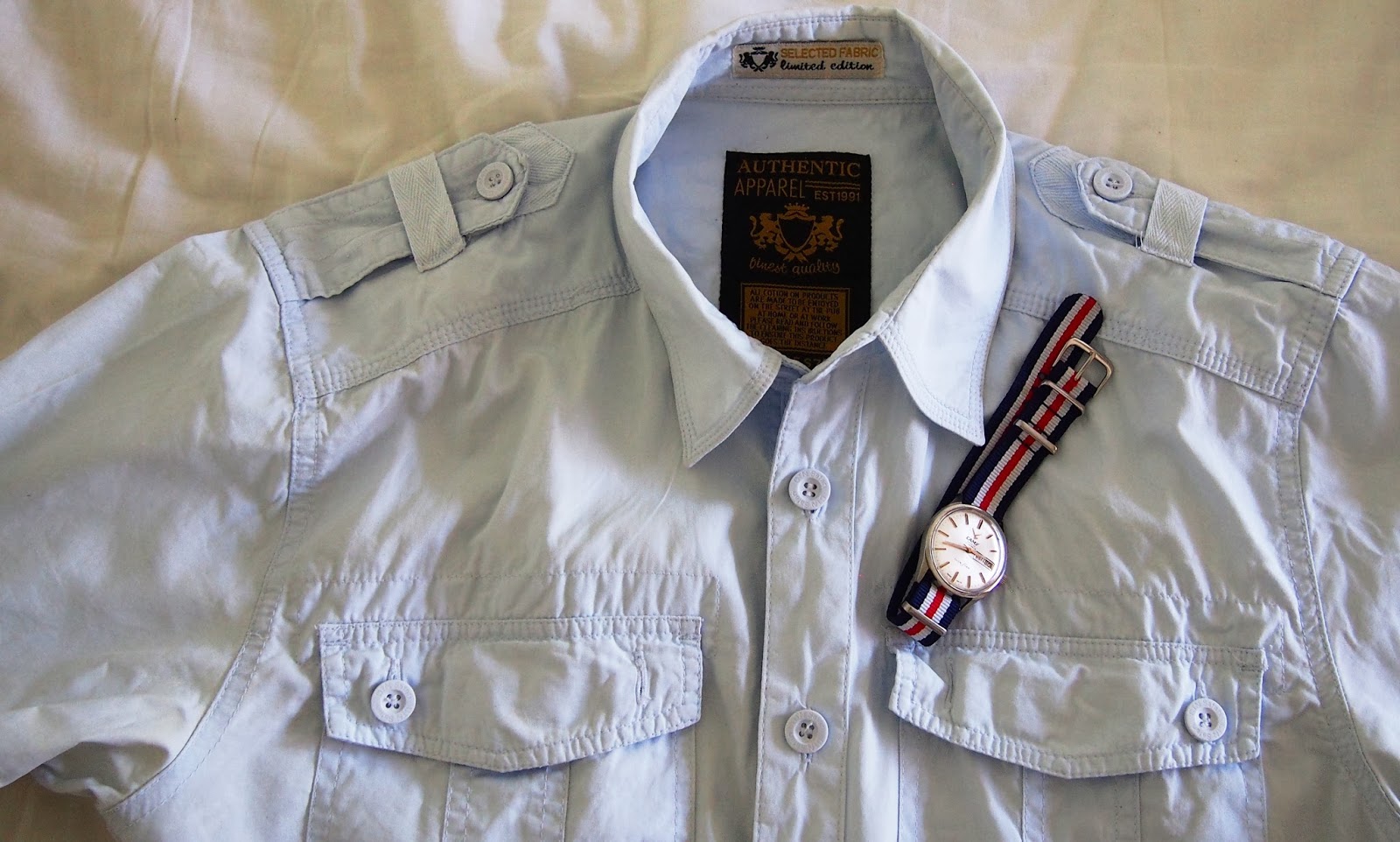 Thanks for reading and have a great weekend, all!
Posted by teeritz at 20:15