I sat down a couple of months ago and watched a DVD of a Bruce Springsteen (and The E Street Band) concert performed at Hyde Park, London, in 2009. I had forgotten how great a performer he is.
The first concert I ever went to was part of David Bowie's Serious Moonlight Tour back in 1983 and that was a fantastic show. 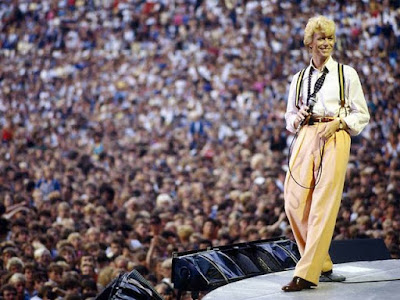 
Bowie had been in the game long enough to know how to put on a great concert. It was a memorable show. The Thin White Duke was in fine form. And his suits were to die for. 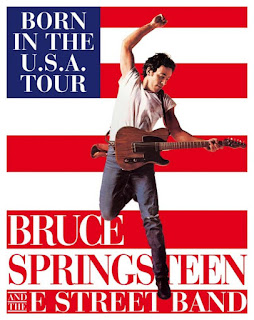 A couple of years later, Bruce Springsteen released "Born In The USA". I didn't know much of Springsteen's music, but I recall hearing one of his songs when I was much younger and would sit up in bed listening to AM rock radio station 3XY. His classic track Born To Run got regular airplay and, even though I hadn't heard any of his other songs, the way the DJ spoke of him made me think that this was a very well-respected and revered musician. He kept referring to him as 'The Boss'.

And so, fast-forward to 1985. "Dancing In The Dark" is the first single released off Springsteen's album and it was soon announced that he would be touring Australia. I had bought "Born In The USA" a few weeks earlier and it had been on "high rotation" (radio DJ lingo. Basically, I played this album a lot) under the stylus of the Pioneer Rondo 3000X turntable.
I knew that I had to get tickets to this concert.


But first, I had to get my driver's licence.
About a month later, I had my driving test (after taking lessons, of course) and I got my licence...on the same day that the Springsteen tickets went on sale.
The ticket agency was at a shopping centre a few suburbs away and tickets for The Boss would go on sale at 10:ooam. Sharp.
I needed some wheels, man.
And I needed 'em fast. 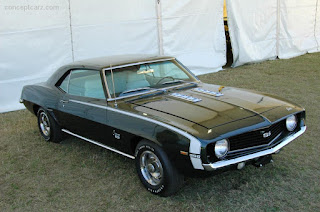 "I got a '69 Chevy with a 396,
Fuelie heads and a Hurst on the floor,
She's waiting tonight down in the parking lot
Outside the 7-Eleven store"
--"Racing In The Street"  by Bruce Springsteen, taken from "Darkness On The Edge Of Town", 1978.


But nope, I didn't have access to a classic American muscle car. I had to make do with this; 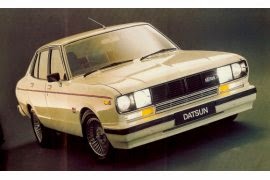 My Mother's Datsun 200B. Same colour, too. Man, when I think of the begging that I had to go through to get the keys to this thing, I think it would have been easier to get my hands on a '69 Chevy Camaro. And no way did my Mum's car look as badass (if that's even possible) as the one in the photo above.

Teeritz bursts into the kitchen. His mother turns from the sink.

TEERITZ (In Italian)
Hey, Ma, I need your car.

TEERITZ'S MOTHER (In Italian)
Ha! Get out of here.

TEERITZ
Come on, I need the car.

TEERITZ
There's a singer coming to
town to play a concert and
the tickets go on sale today.

TEERITZ'S MOTHER (voice rising to "Costanza's parents" level)
But, are you crazy? You got your
licence a day ago, you're crazy.
Leave me in peace.

TEERITZ'S MOTHER
Teeritz, stop and get out. You
just got your licence and I'm
not giving you the keys to run
my car into the back of a tram.
Young people are always the ones
who have accidents, get out!


This 'banter' went on for about another ten or fifteen minutes. Brother, was it tiring. Finally, she gave me the keys and I got the hell away from her.
I got to the ticket office around 11:30am. Naturally, there was a long queue. I would be getting two tickets. One for myself and one for my older brother.
I checked the ticket prices displayed above the box office; $23.00 each.
I began to feel a rising panic. I thought they were $22.50 each.
Then I checked the money in my wallet.
Two twenties and a five dollar note...and nothing else.
I was a dollar short.

"Oh, no fucken' way, man!" was the only thing running through my mind for a couple of minutes, like some kind of profane mantra.
I looked up at the lady in the box office, wondering if she would let me have the tickets for a buck less. I had a thick head of hair and a deep voice back then. Highly doubtful. The hair's mostly gone, but I still got the deep voice.
I could feel a cold sweat break out on my forehead. I didn't have an ATM card back then and I certainly didn't have a credit card.
I scanned the faces in the queue. And by some miracle, there was a guy named Marcus* standing about six or seven people ahead of me. He and I went to the same secondary school. We were in the same year, although he was in another class.
It was worth a shot.

"Hey Marcus, how's it going?"
"Hi, Teeritz, yeah good. You getting tickets?"
"Yeah, but I'm a buck short. I thought they were twenty-two bucks fifty. Listen, have you got a dollar you could spare me?"
"Oh, man."
"Obviously, I'll pay you back." (not really knowing when I'd see him again, although I had previously bumped into him once or twice in the main Italian restaurant/café precinct in my city)
Marcus reached into his jeans and fished out a dollar coin. A buck back then was the equivalent of about $3.50 today. He handed it to me. A little reluctantly.
"Thanks, man, you're a life-saver! I'll shout you a coffee next time you're in Lygon Street."
"Yeah, you'd better."

I haven't seen Marcus since, but if I ever do, I'm gonna hand him ten or fifteen bucks. That's one dollar from 1985 adjusted for inflation. Give or take. Mathematics was never my strong point.
And I'll buy him a coffee too.

*Marcus is not his real name.


I went to the concert on that night in April of 1985 and what a phenomenal show it was! Springsteen and his band were on stage for over three hours. It was an amazing performance. The E Street Band was tight, and The Boss had us all in the palm of his hand.
He would tell little anecdotal stories about his life and, from memory, he and his father had a difficult relationship. It was quite touching to hear him tell of how he nervously waited to hear whether or not he'd be called up for the Vietnam Draft. In the end, he was classified 4F (unfit for duty) due to injuries sustained in a motorcycle accident when he was younger. On the day that he found out, he got home and his father asked him about the draft. Springsteen told him he'd been declined. His father responded with; "I'm glad."

I had once read that U2 had arranged to meet with Springsteen to learn a little more about how to relate to an audience. This was around the time of their Lovetown Tour in 1988/89. Sorry, boys, but if you need to learn it, then you ain't ever gonna learn it. And that's coming from somebody who's been to five of your concerts since the mid Eighties.

Bruce Springsteen was able to distill a performance in front of tens of thousands of people into something resembling an intimate club gig. The audience was hushed whenever he spoke and it felt like he was speaking individually to each and every one of us. Sure, I was standing amongst thirty-five thousand other people, but it felt like I was the only person there. I've read of people saying they've been to concerts where "it felt like the singer was speaking directly to me" and that night, I understood perfectly what that meant. I was experiencing something special and unique and I've never experienced it at any of the other dozen or so concerts by other artists that I've been to since.

Later on during the show, I heard a lady in front of me say to her boyfriend; "He's got all the right muscles in all the right places."

Most of my Springsteen albums (yes, vinyl) are stored away. I have a couple of CDs within easy reach, but I look forward to the day when I can pull a record from its sleeve and gently lower a stylus needle into the groove and twist the volume knob up a little to hear The Boss plead with Rosalita, or remind me that everybody's got a hungry heart. 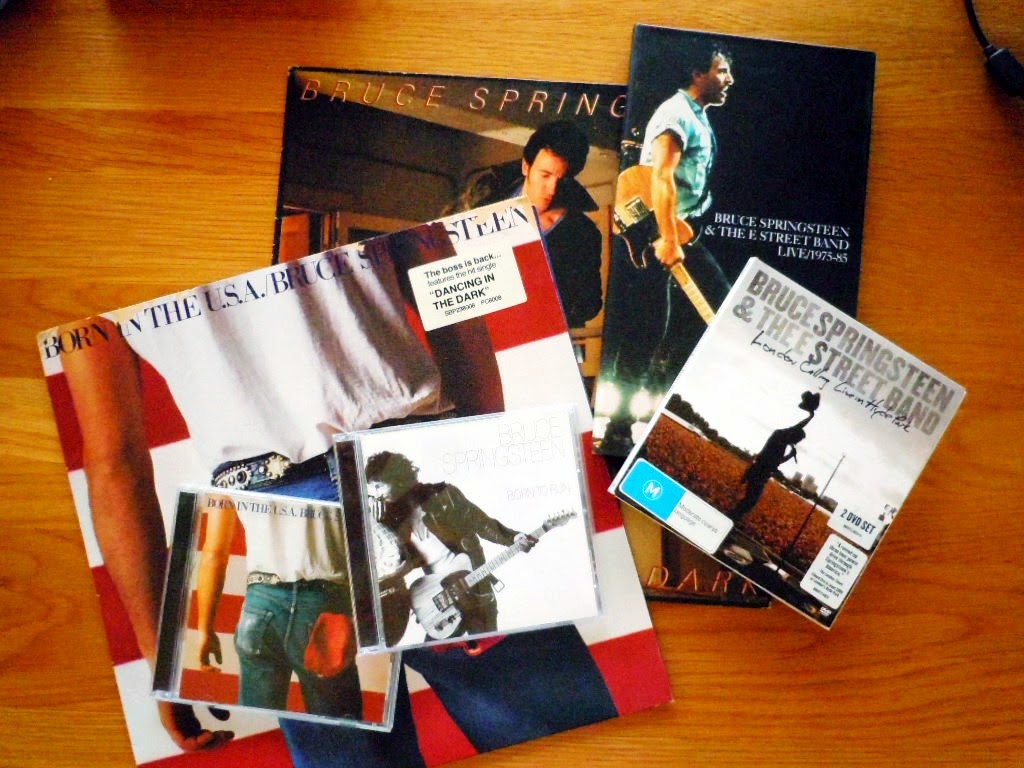 Bruce Springsteen has always represented a mythical America. To me, anyway. He's always come across as a modern poet of the working classes, built of denim and chiseled biceps, exhaust fumes and axle grease, a champion of struggling farmers, Vietnam Vets and patriotic steelworkers. The kind of guy who'd give you his last cigarette (if he smoked), the keys to his '71 Mercury Cougar or the shirt off his back.

I made a new friend on that April night in 1985. His name is Bruce.