Some Pics Of The State Library Of Victoria That I Wanted To Add To My Previous Post.

I meant to include a couple of snaps that I took at the State Library of Victoria earlier this week, but I forgot to add them to my Friday Wristwatch post yesterday. These were taken with my Samsung Galaxy S4 Mini. I'm still in two minds about keeping this phone, but that's another story.

Anyway, here's a up-close shot of the outside of the library's entrance in Swanston Street; 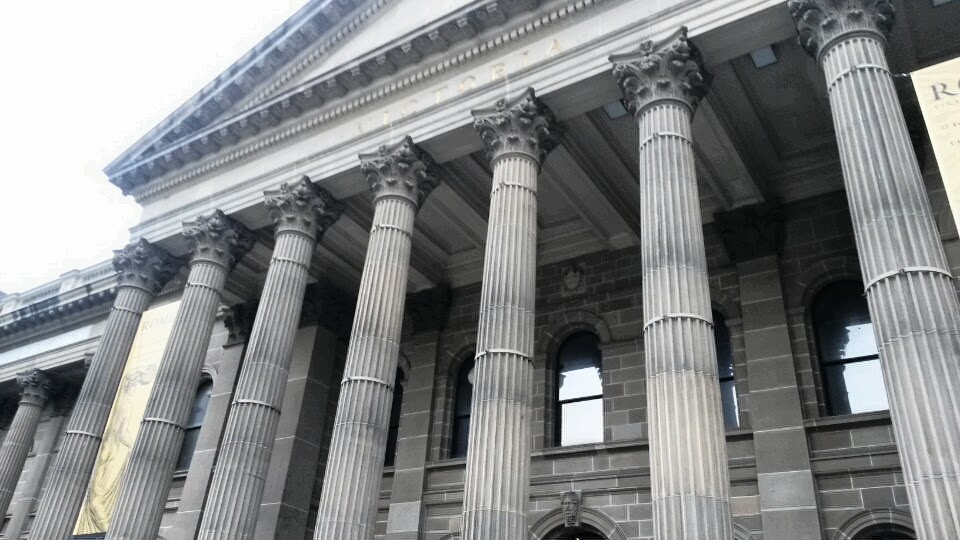 And here's what a proper photo of this library looks like;


The wonderful staff gave us a quick tour of some parts of the library. One main attraction of this library is the La Trobe Reading Room, which is located below The Dome seen in the photo above. The Dome was topped with leadlight panels of glass when it was first opened in 1913, but these had deteriorated over the years and the entire roof refurbishment was commenced in 1999 before this area of the library was reopened to the public in 2003 and renamed the La Trobe Reading Room. It is an impressive space, without a doubt. I could sit there for hours just staring at it.

This is a quiet study area. Good luck tapping away at typewriter keys in this room. 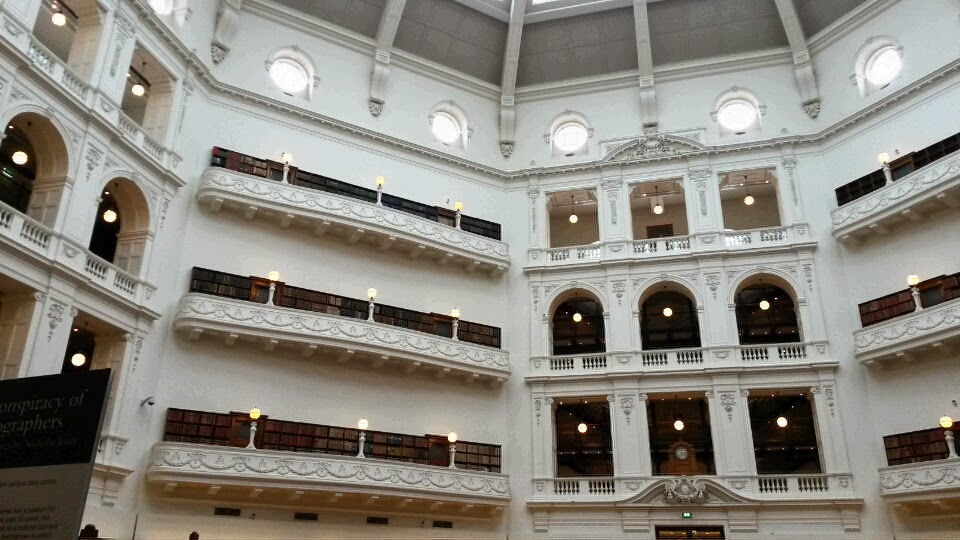 The upper floors contain exhibition space where artworks and old manuscripts are displayed. The books you can see on the shelves are for display/decorative purposes only. They are all duplicate copies of books that the library has stored elsewhere for patrons to view by prior arrangement. 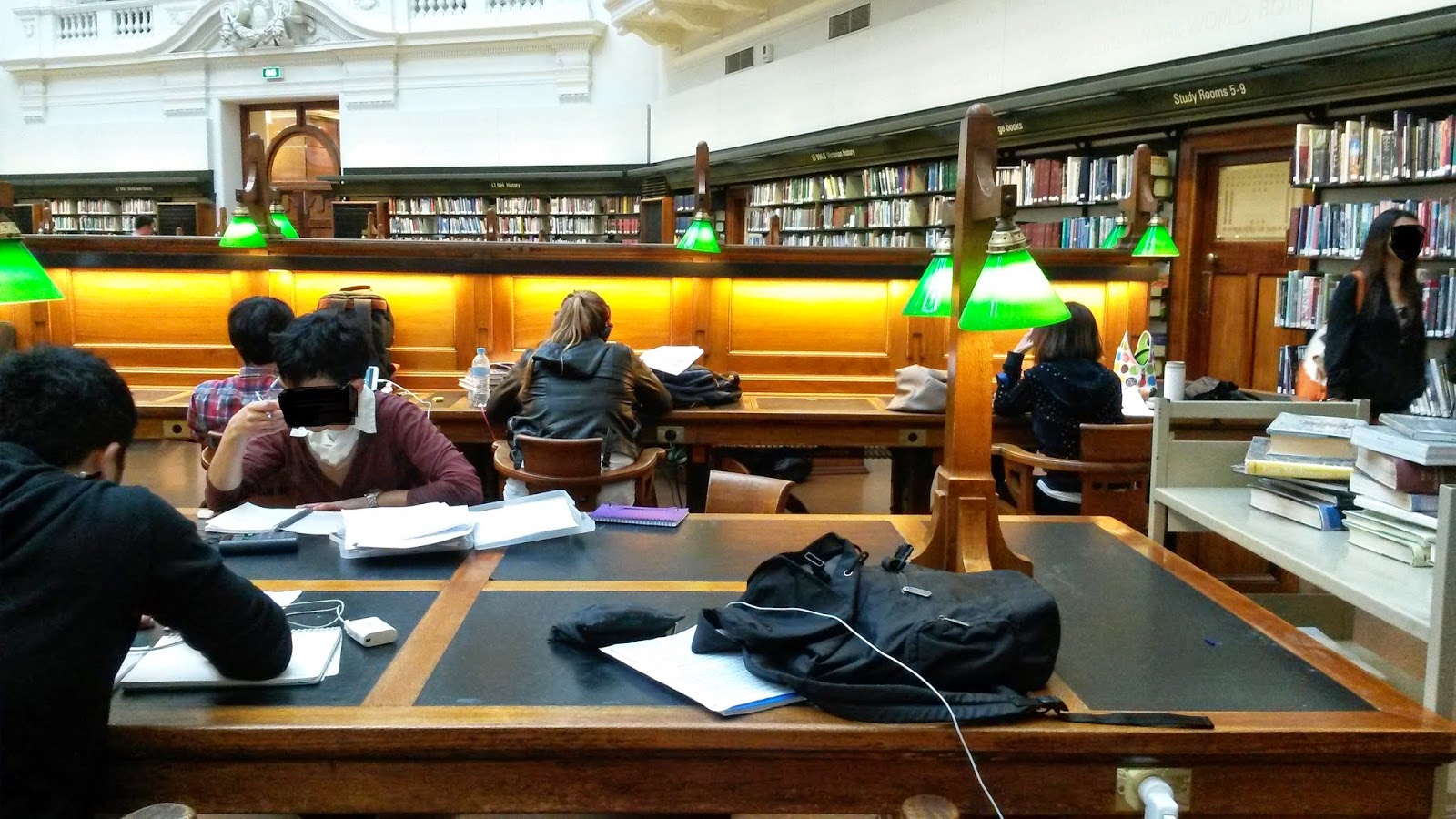 Here's a closer view of the study desk area. All of the original furniture is there and I'd guess that the power points were added sometime in the last 20-25 years to accommodate the use of laptops. In the interests of privacy, I have crudely blacked-out the faces of patrons facing the camera.

And here's a floor-level view of the Dome; 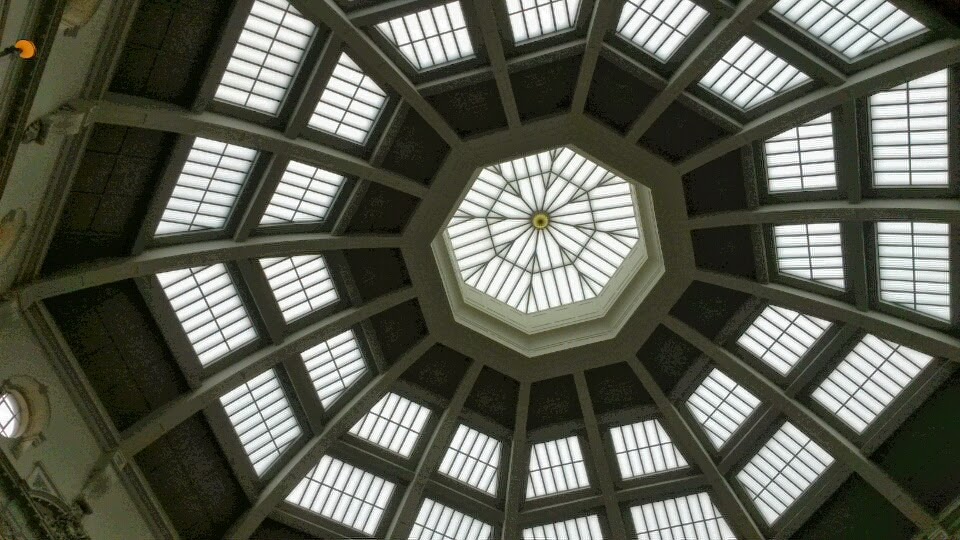 I wish it were a sunnier day. That would have truly lit up this space. Still, there was a pleasant enough amount of light filtering through.


The State Library of Victoria is an impressive place, built at a time when those with the influence and finances subscribed to the view of creating something that would be of benefit for all, regardless of social standing or economic status. This was an institution designed to be accessible to all. A recent exhibition, entitled Free, Secular and Democratic, traced the history of the building of this library from the years 1853 to 1913.
Now, as we are firmly ensconced in the 21st Century, the State Library of Victoria has reaffirmed the ethos outlined by the library's founders and added the tenet 'Information. Ideas. Inspiration. For Everyone'.
The State Library of Victoria easily ranks up there among the best libraries in the world, such as The London Library and The New York Public Library. If you ever come to my town, it is well-worth a visit. If you already live in Victoria and have never been there, then you should go there and take a look through the place. You'll be in awe.
In an age where we have access to information 24/7, across a wide variety of digital delivery methods, it pays to unplug, step back, and see how people educated, informed, entertained, and bettered themselves in days gone by.

If you want to know more about the State Library of Victoria, then check out their website;

Thanks to wikipedia too!  State Library of Victoria Wikipedia Entry

In other literature-related news, I seem to have four different  books on the go at the moment. My wife brought home a dog-eared copy of You Only Live Twice. This book had been weeded out of her library's collection and would go on a shelf for staff to take if they wanted to. She knew I already have two or three copies of this book, but she brought it home anyway. I put it in my car to read on those afternoons when I'm waiting for my kids to finish school. As such, at a rate of two to five pages a few days per week, it should take me about a year to finish reading it. That's okay. I've already read it. Even if it was sometime in the early 1980s.

While at an Op Shop last month, my wife got me a copy of John Le Carre's Our Kind Of Traitor. Since she readily admits that she doesn't know what books I already have, she wasn't too surprised to find that I do indeed have a copy of this book. No matter. I'll read it and take it back to the Op Shop so they can sell it again. To somebody else.
I'm not too far into it, but Le Carre is a superb writer, always was. And I've recently read that it's to be filmed soon, which is great. Problem was, the article that I read also gave away some major plot elements, dammit. Didn't spoil the story, but it told me too much about how the story unfolds.

My wife recently read a book called Capital, by John Lanchester, and she suggested I have a read of it. I kept putting it off, to the point where the book is now overdue, but once I started reading it, I got into it fairly quickly. Set in 2007, it concerns a particular high-end street in London. The residents in this street are all of different ages and income brackets and, one day, they all receive a postcard in the mail with the simple sentence; 'We want what you have'. Some of them think it's just a real-estate agency marketing ploy, some perceive it as a kind of ominous threat. Lanchester writes beautifully. One character's tale, a high-flying financial trader named Roger Yount, is particularly funny.

And, about two weeks ago, my wife brought home Glock, the story of how the infamous pistol was developed by a humble Austrian hinge and knife manufacturer and became the choice of law enforcement and criminals throughout The United States in the 1980s. It's a fascinating and very well-written account of the rise of this steel and polymer pistol, covering it's early beginnings, attempts to ban its importation into the States, and it's popularity among rappers and Hollywood screenwriters.

So, you can see that I've made a slight mess with all of this. Luckily, no two books cover the same ground, so there's no real risk of my mixing up events between books. Although personally, I should probably drop to just two books at a time. Not normally thee way I read anyway.

My wife, of course, churns through books at a rate of knots. It's an amazing skill. I used to be a voracious reader, but I've never been a fast one.
However, in recent months, I've found myself watching less TV and spending more time on the 'net. I personally don't find this to be very enriching, to be honest, and have made a vow to read more and surf the web less. With all the assignments I've been tackling lately, I find that I've spent a lot of time staring at the screen of this laptop as it is, so perhaps my eyes could probably do with a rest.

And so, I think I'll soon flick on the coffee machine, make myself a latte and go stretch myself out somewhere and read a few pages of something.
There are far, far worse ways to while away the time. 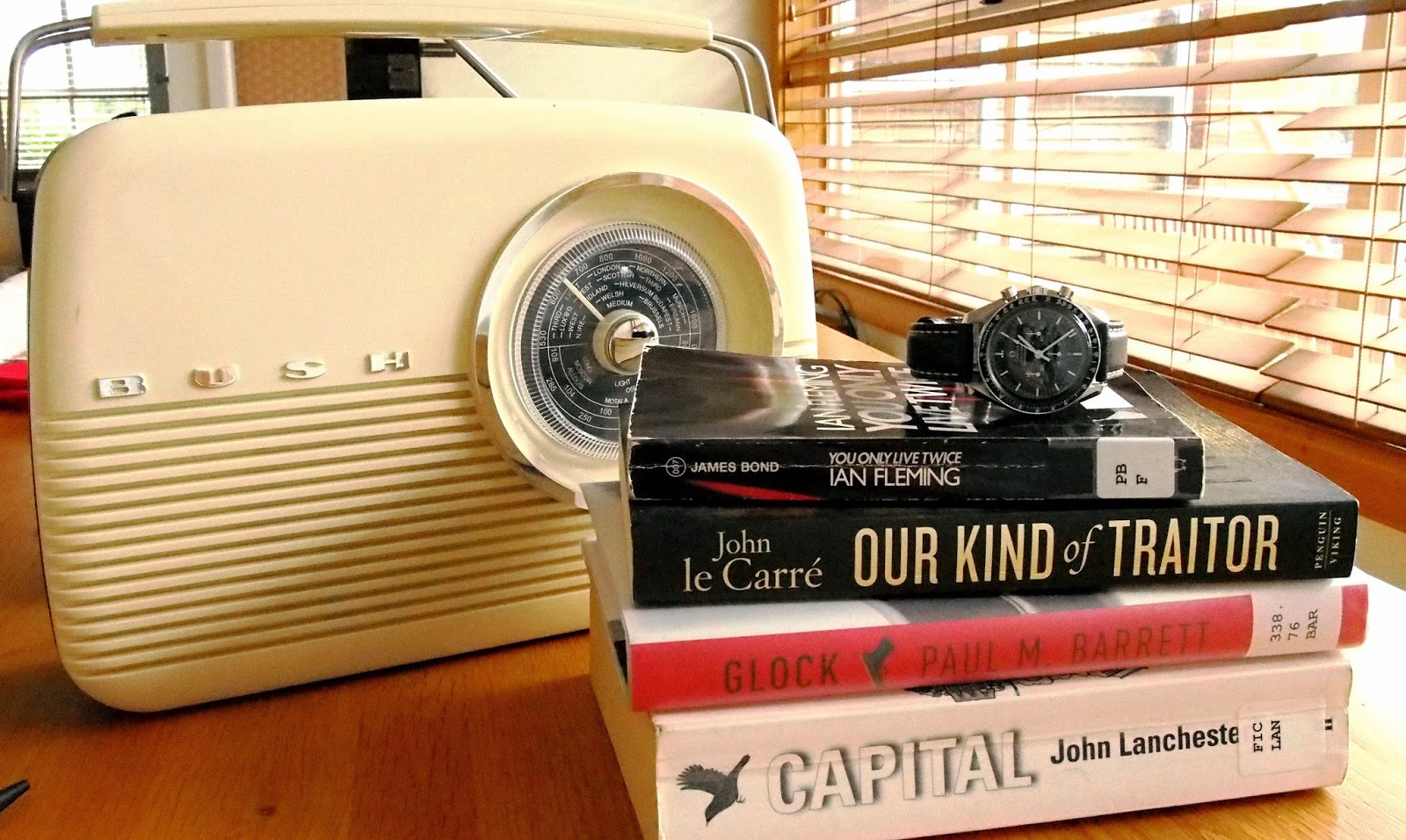 Thanks for reading!
And keep reading!

Email ThisBlogThis!Share to TwitterShare to FacebookShare to Pinterest
Labels: Books and Reading, Life