Okay, I have two Olympus Trip 35s. I got the second one off eBay not so long ago and decided to recalibrate the lens.
Why, you may ask? Because the whole lens assembly felt a little wobbly. A quick search on the net revealed that there are three little screws that hold the lens in place and that they have a tendency to loosen over the years. Okay, so I slowly undid these tiny screws and removed the top section of the lens, tightened the screws underneath, and then put it all back together. Then, I read the instructions for how to do this correctly and, to my horror, found that I had missed one crucial step BEFORE taking it apart. I had to make a note of where the lens bezel sits before removing it so that I'd be able to put it back exactly where it needed to go. Of course, I didn't do this. And so, an exercise in trial and error was aboout to commence.
What an absolute headache that turned out to be. I got there in the end, however, and all it took was;

-Taking the camera apart three times.
-Adjusting the lens the first time...incorrectly.
-Removing the old faux leather skin (which, in hindsight, I probably shouldn't have done.)
-Adjusting the lens a second time, using a different method, which produced fantastic and sharp photos.
-Churning through FIVE rolls of 24 exposure 35mm film. So many pictures of the house and cat!...
-...only to find some flare of light on certain photos.
-Using double-sided tape and the outer cover of a cheap vinyl diary, making a new skin for the camera.
-Another roll of film.
-Which resulted in perfect photos. So maybe the light was getting in through seams/gaps in the body of the camera.

Now all I have to do is order some new skins off the web. That should solve that problem.

Of course, I stupidly took apart the lens on my first, perfectly-working Trip 35 to see how it was all arranged before attempting work on my newer one. When I put the lens back together, I threw the focus out of whack. And so, I now have to do the same as above with this camera.

It all sounds simple enough, although I hate to think of how many minutes/hours I spent staring at the camera before I turned any screws.
Which brings me to the first camera. The one whose lens I took apart and adjusted when it didn't need adjusting.
So I'll be recalibrating the focus using the method that I found on the web and I will be sure to take pics so that I can post about it here.
There's only one (actually three) little problem(s).
There are three small screws that need to be undone in order to remove the top section of the camera from the main body. And these screws seem really hard to undo. I tried using one of my expensive jeweller's screwdrivers, but I don't want to burr the screw head or bend the screwdriver blade.
Here are the screws;

This top one on the silver section needs to be undone.

Along with two of the same, positioned under the film rewind crank handle. 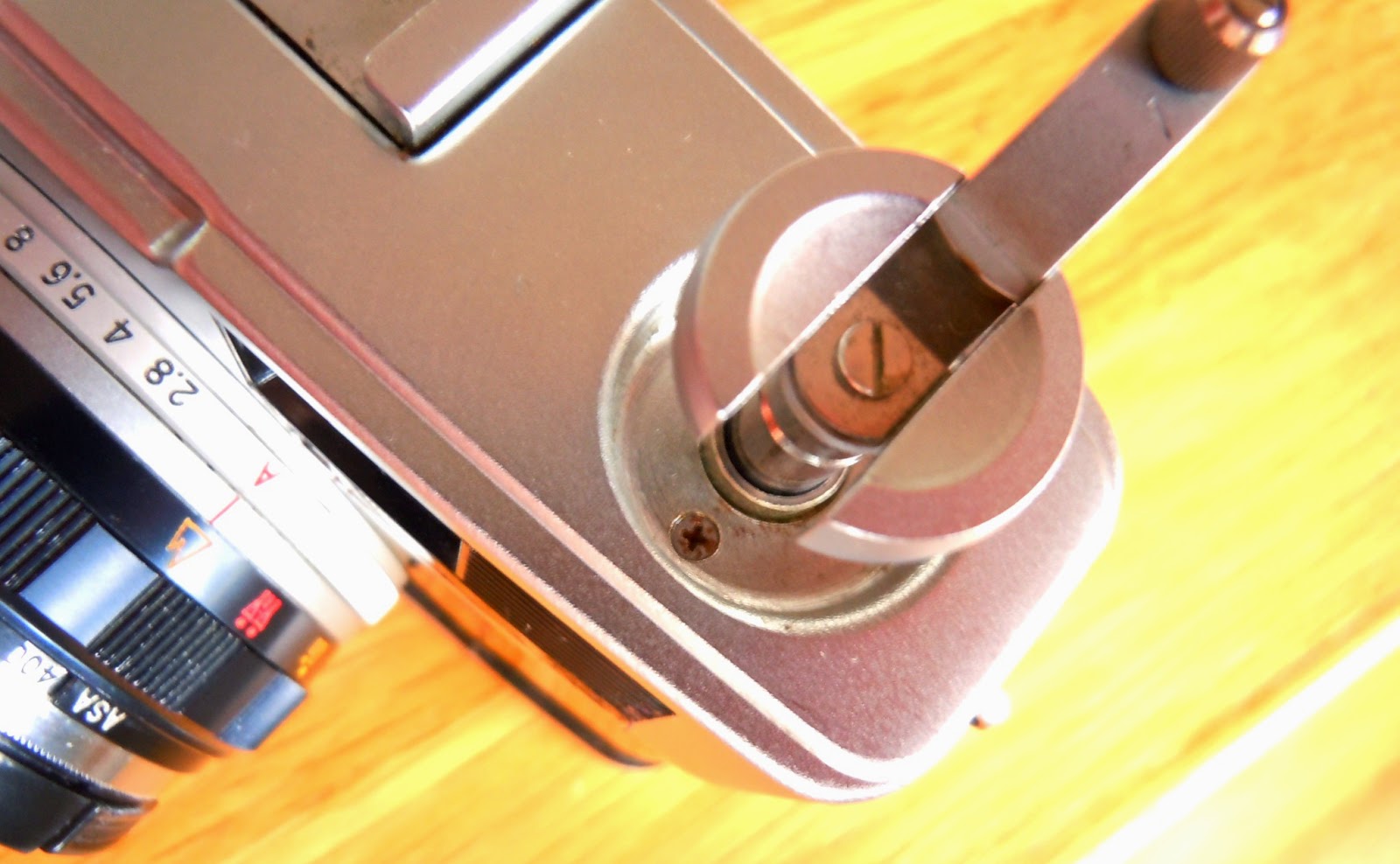 But the suckers won't turn. I bought a set of small Phillipshead screwdrivers from the hardware store and have had no luck.
Now, my question is- Should I apply a toothpick-delivered drop of WD-40 onto these screws? Will that help?
Any other ways of loosening tiny screws that you may know of?
Or am I just wasting my (and your) time with this post? 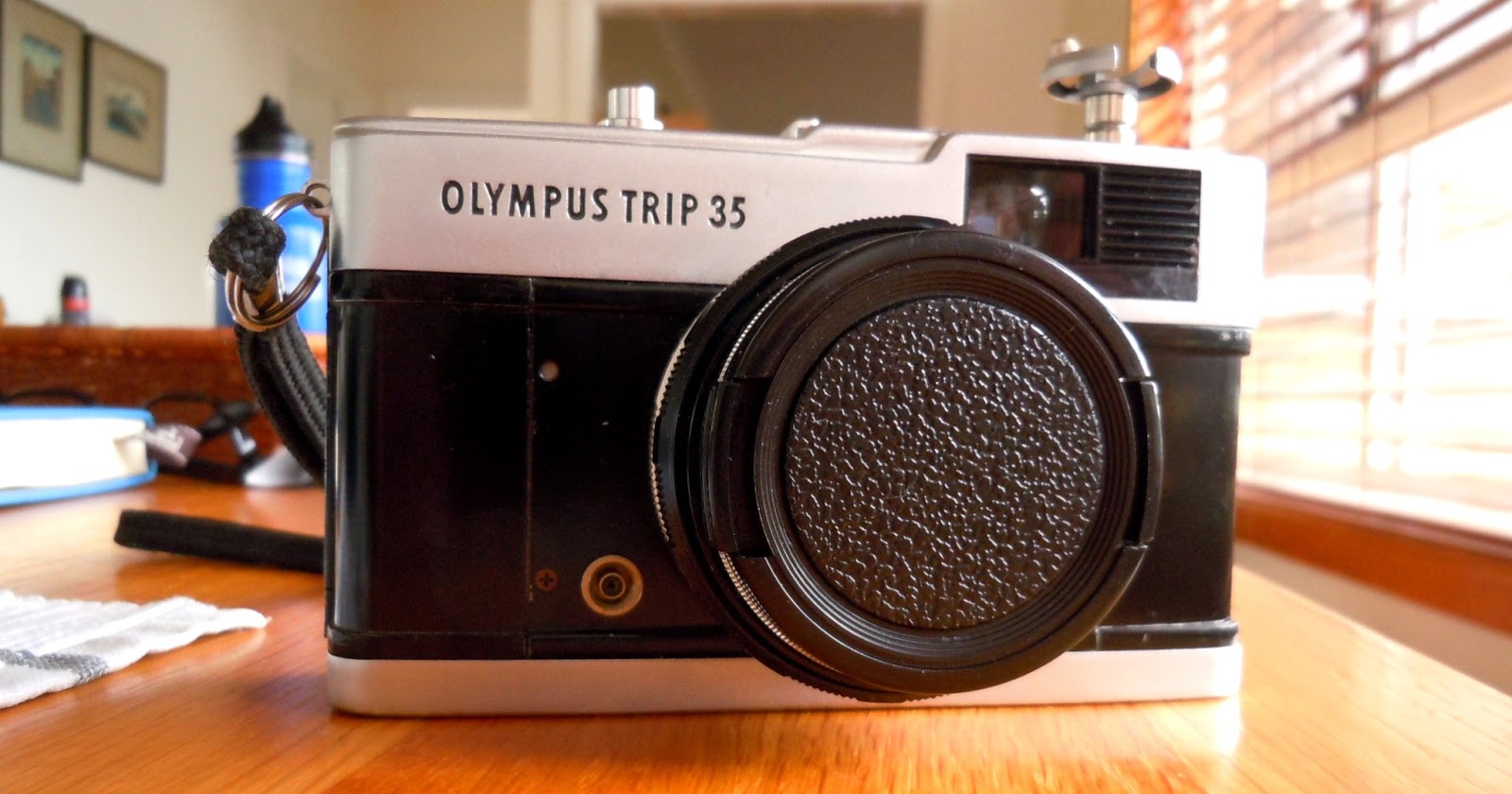 The Trip 35 was in production from 1967 until around 1984. It is a stone-cold classic rangefinder. Which is why I'm spending so much time on getting it back to working condition.  This one has its vinyl skin removed. I re-covered it temporarily with some sky-blue vinyl, but didn't think to get a picture of it. I should have perhaps left that covering on it, but I wasn't happy with how I'd covered it. No real big deal. I'll just get new skins. They cost eight bucks.