Re-Focusing The Lens On An Olympus Trip 35...Serves Me Right For Messing With It In The First Place.

I decided to tackle this repair job.
I had already succeeded in recalibrating the lens on my other Trip 35; 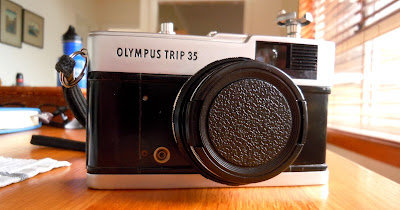 ...and the subsequent photos that I took turned out great. The focus issues were sorted out, but I was still getting some reddy/orange light flare in the upper corners of the photos. This was perhaps due to my having peeled off the original black vinyl covering. Removing this covering exposed the seams in the metal body of the camera where light was possibly getting in and hitting the film. I re-covered the camera temporarily with double-sided tape and some light blue plastic, but I wasn't too thrilled with how the camera looked. However, the photos came out well and that was the main thing. I'll be ordering some exotic-looking leather skins for these cameras in the next week or so.

Anyway, back to the main story of this post. The newly-purchased Trip 35 developed some looseness in the lens assembly. I had searched the net for info on how to retighten these lenses and landed on a great tutorial;

This tutorial, by Kuljit Athwal, explains how to partially remove the lens in order to adjust three small screws beneath it. It was a painstaking process for me, since I've never taken a screwdriver to a camera before. Athwal's article provides a link to another article to do with repair of the light meter system and removal and cleaning of the aperture blades of  these cameras;

By referring to these two tutorials, I was able to tighten the screws holding the lens together. HOWEVER...I forgot one crucial step which involved making note of the main lens unit's position BEFORE fully unscrewing and removing it, dammit to hell!
And, as an exercise in further stupidity, I grabbed my first Trip 35 and took apart the lens of that one to see if I could copy its configuration for my other one. In refitting the lens, I unwittingly wound up twisting it about an eighth of a turn. This was enough to throw the lens out of focus, as I found it on the next roll of film that I had processed.
And so, using the above tutorials, plus this one here;

...I was able to get the lens back into sharp focus. But I didn't document this process. So, in the interests of material for a blog post, here it is.

Okay, first, I needed something large with bold font. I would need to view this through the camera lens while holding the aperture open. I cleared the dining table and positioned the book, a large hardcover featuring Bond film posters; 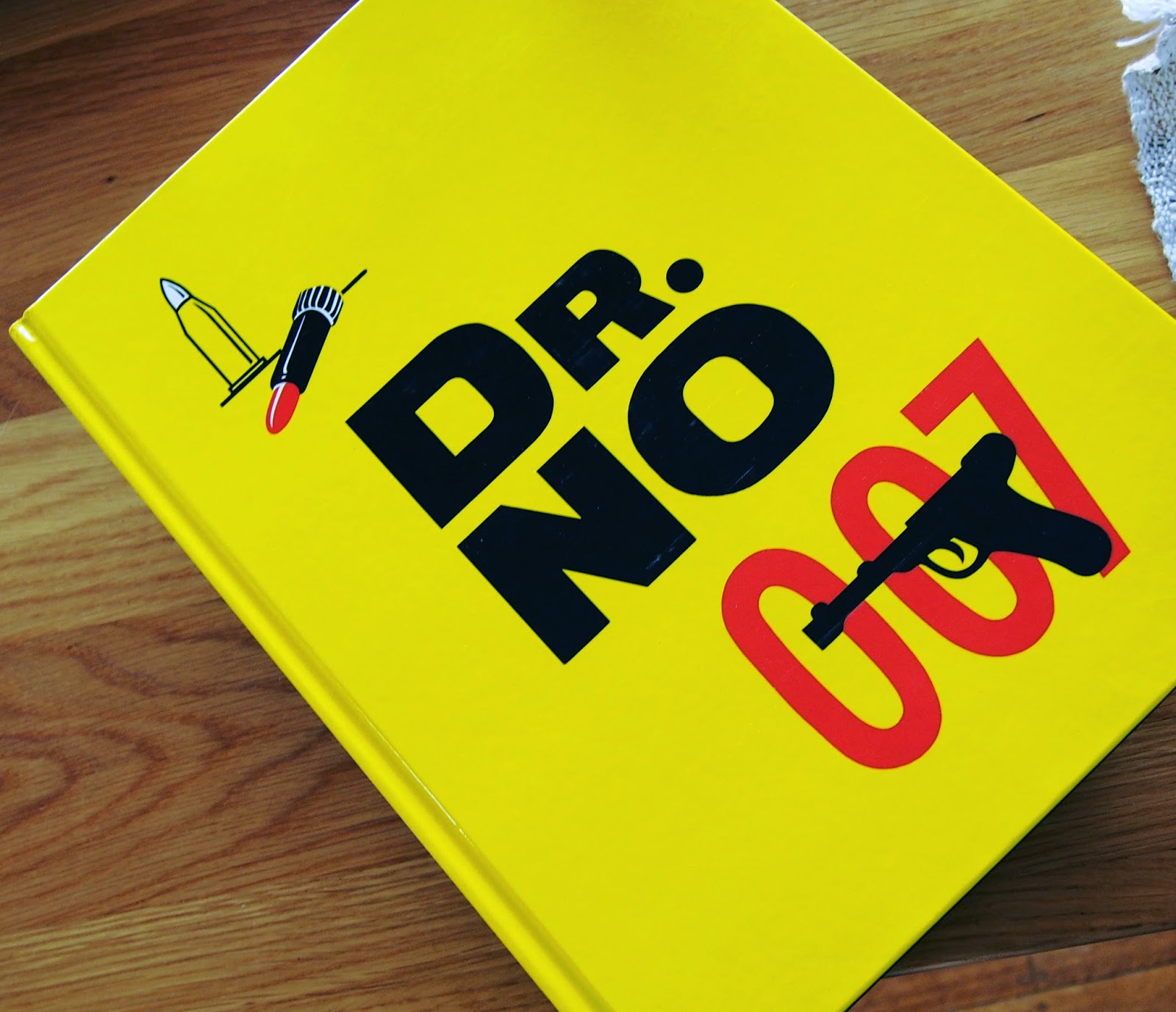 This graphic would be sharp enough to help me adjust the lens. Next up, I used a small piece cut from a plastic shopping bag, and a small rectangle of harder plastic cut from an empty DVD case. These two items need to be taped against the film rails where each frame of 35mm film would sit if the camera were loaded. Like so; 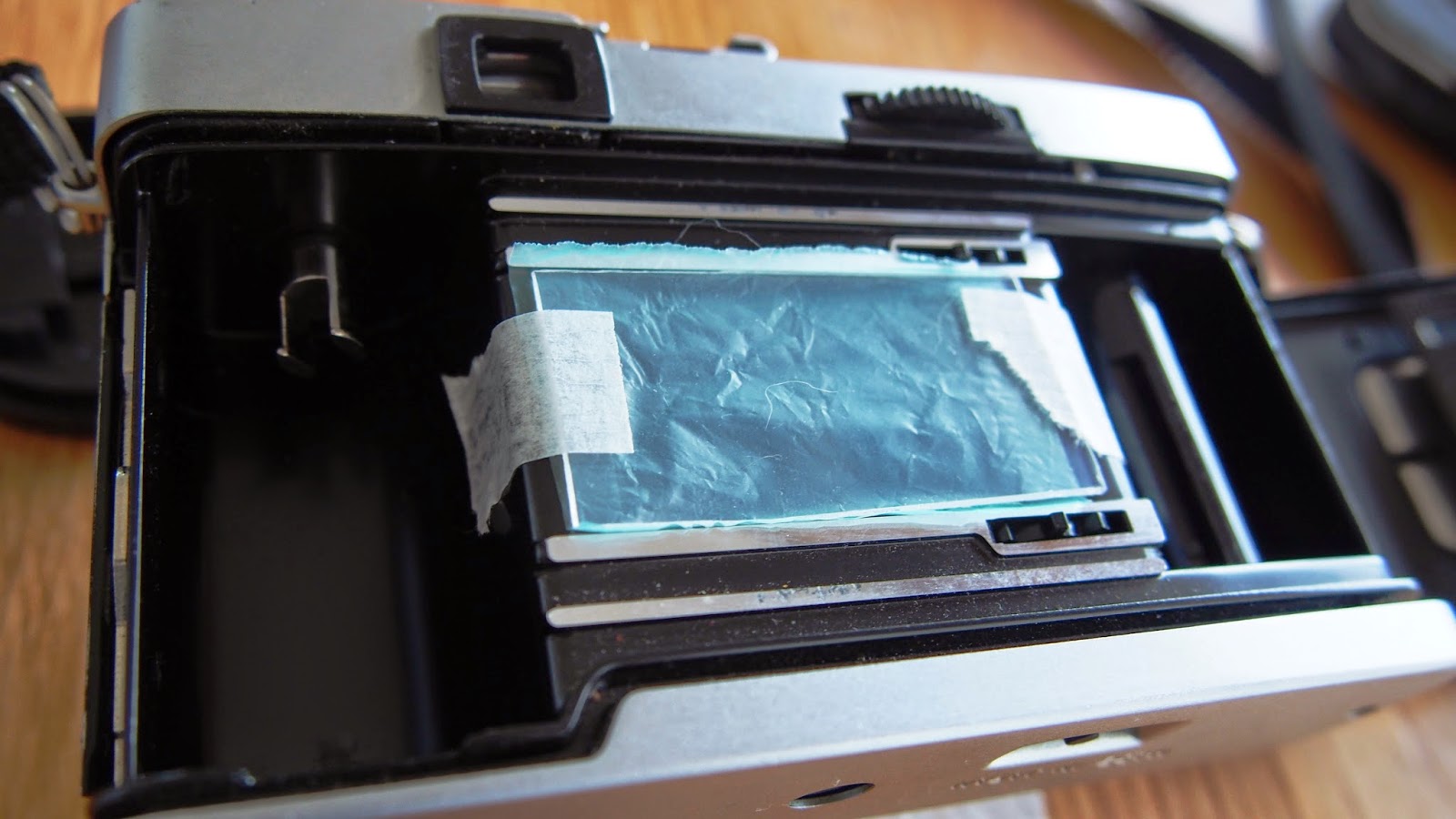 Whatever you use, be it plastic or paper, it needs to be opaque or frosted. I thought about wax paper, but it seemed too opaque. Perhaps tracing paper would have been the better option, but I didn't have any in the house. So plastic would have to do. The piece of DVD case is to ensure that the plastic sits flat.
Next up, The lens bezel needed to be removed so that I could adjust the lens element. This bezel is held in place by three little screws; 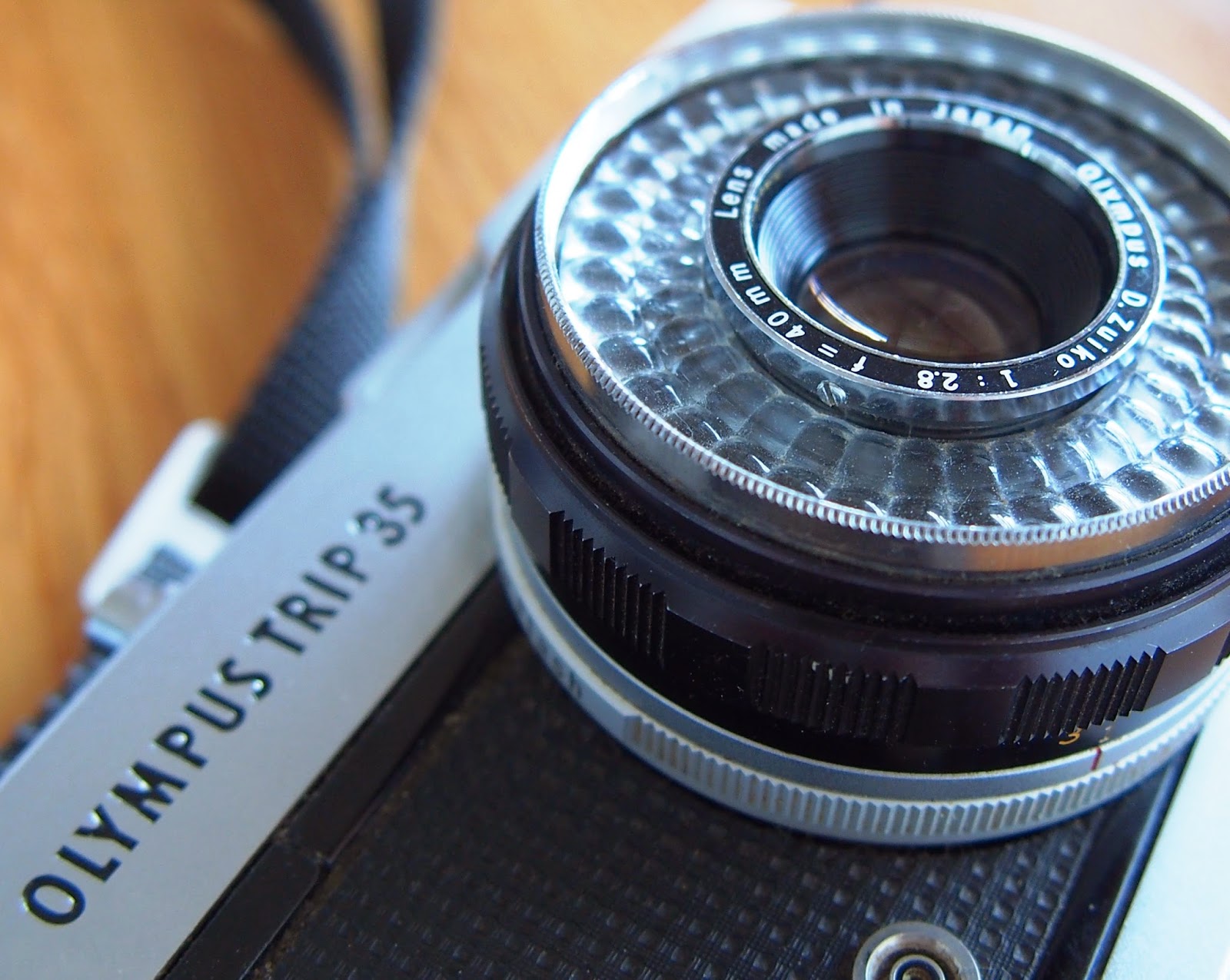 Which came out easily enough, but I made sure not to unscrew them fully. They are very small. As it was, I was wearing my late Father's old pair of bifocals. Man, my eyesight's not what it used to be.

And now, the top section of the camera needed to be removed. You may recall that I asked recently for suggestions regarding the removal of some stubborn, tiny screws;

In the end, I dabbed one screw with a tiny droplet of WD-40 and then used brute strength. Burred the screw slightly, but it came out okay. Once the top section was off, it looked like this;

And now, the tricky part. I had to gently place a screwdriver against a notch in the aperture release cog (for want of a better term) while pressing down on the shutter release. As the shutter is pressed, the brass cog spins just over 180 degrees. This is what causes the shutter to open when a photo is taken. It all happens in the blink of an eye. By holding a screwdriver against the brass cog, the idea is to control its spin and freeze it halfway so that the aperture remains open and you can look through at what the camera lens 'sees'. If the lens is out of focus, you'll be able to see it.

Here's how the set-up looked. Excuse the sideways photo. I rotated it on my pc, but Blogger had other ideas; 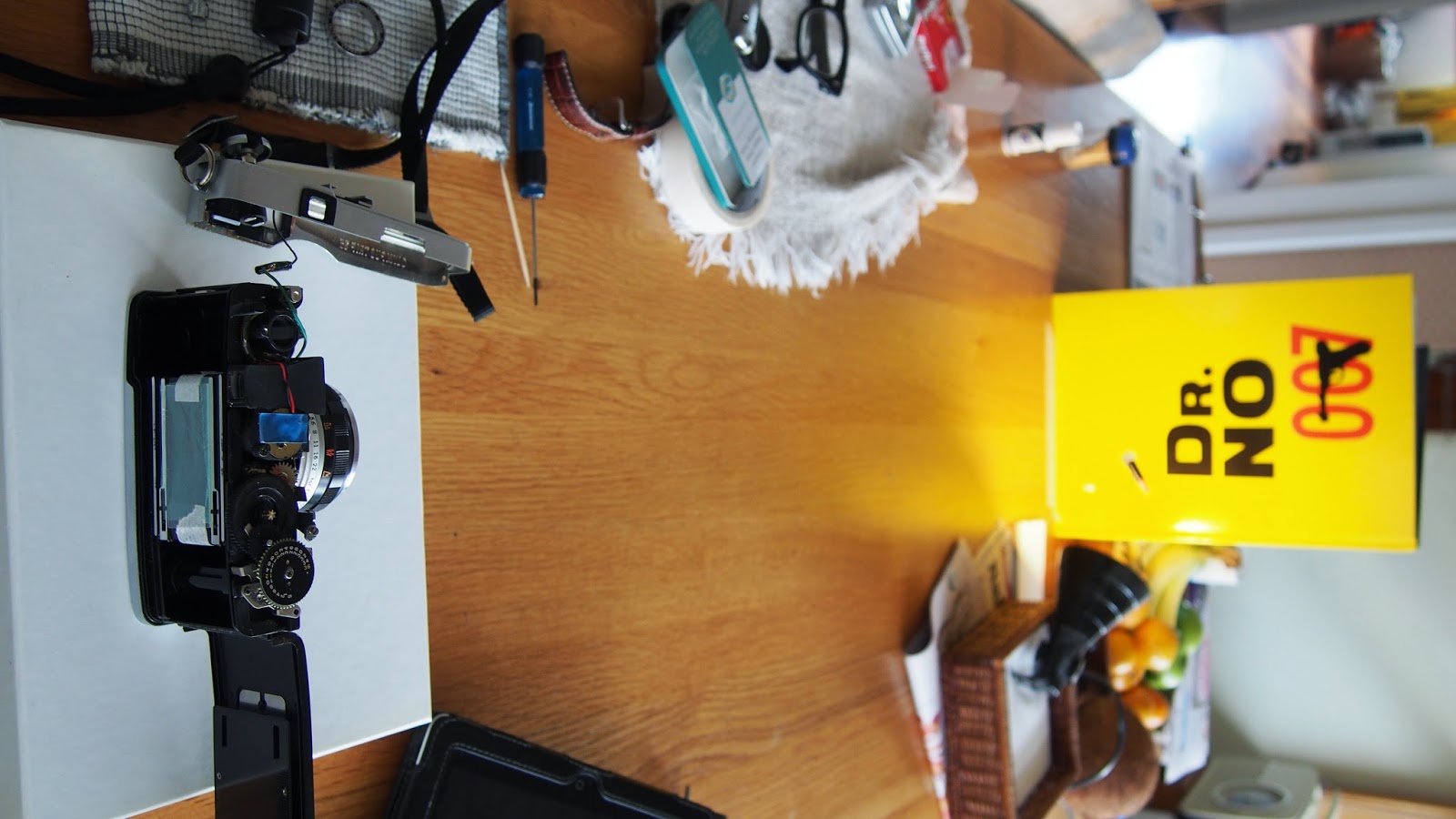 Anyway, you'll notice that the book has been placed upside-down. The image is inverted once viewed through the lens. So, I set the focus ring on the camera down to its shortest distance- one metre. Then, I positioned the book one metre away from the camera's lens. All set.

Now, the fun part. You need three hands, ideally. One to hold the screwdriver, one to hold down the shutter release, and one to adjust the lens from the front while you look through it from behind. Luckily, I've had years of practice with holding small screwdrivers and tiny parts from my time selling wristwatches and removing links from their bracelets. 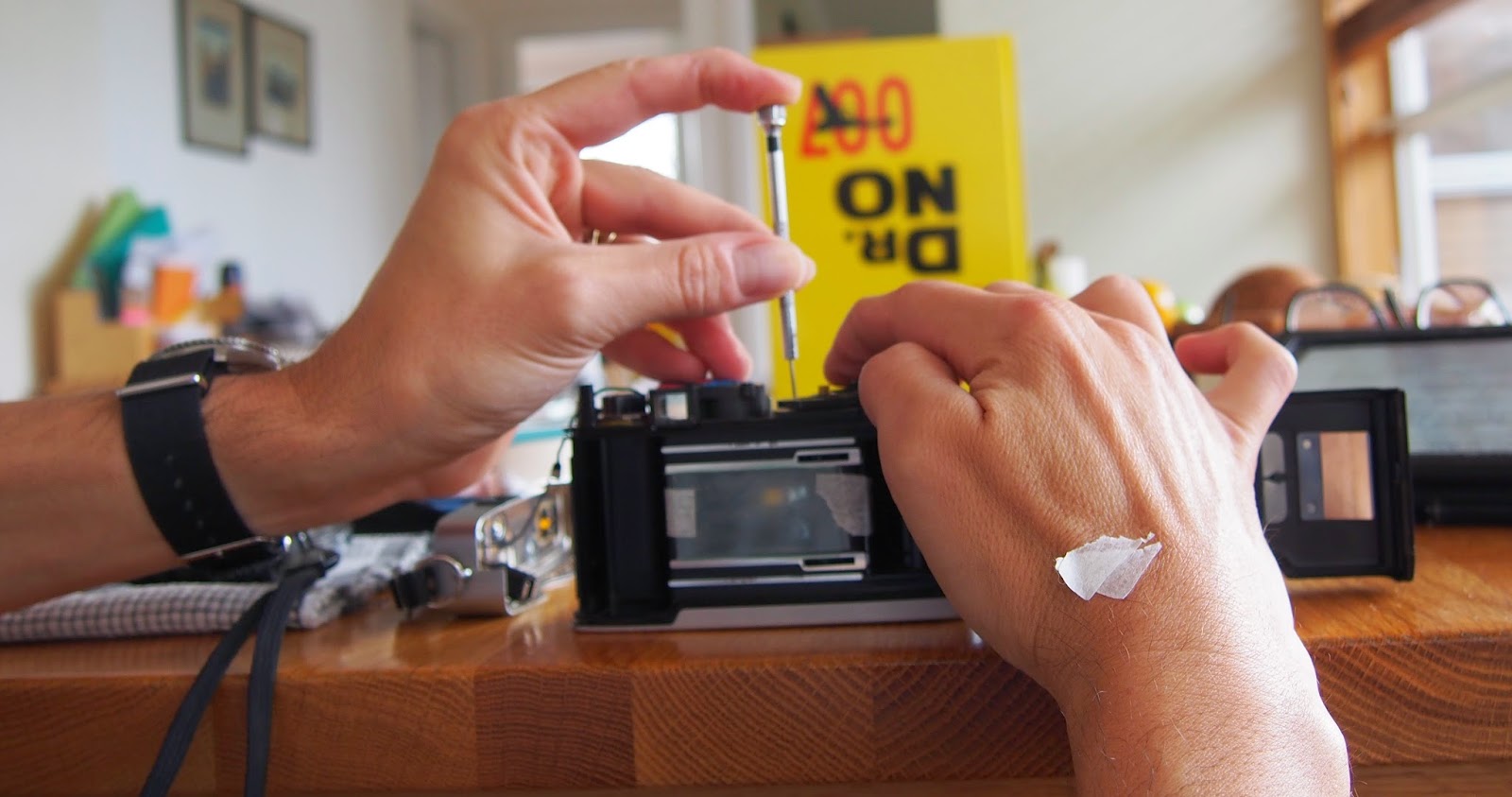 So, I was able to hold down the screwdriver with the index finger of my right hand while holding down the shutter release with my right ring-finger. This left my left hand free to adjust the lens. To play it safe, I had my loupe held in place by my right eye as I looked at the opaque sheet of plastic and saw; 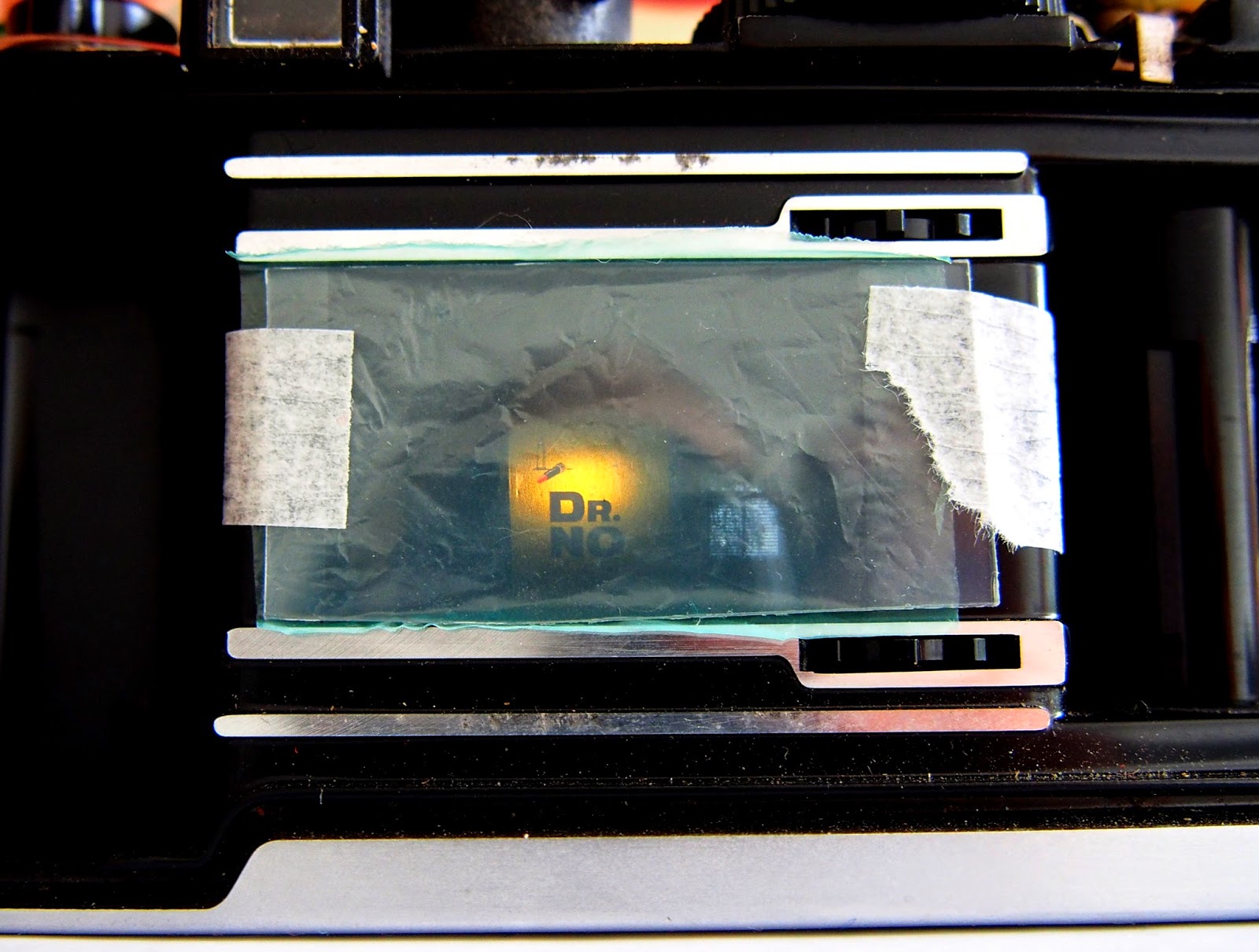 Admittedly, I had a few shots at adjusting it. I even took a break and applied some eye drops. I wanted the bullet-top and the lipstick-bottom to look sharp. However, the upper-case 'D' showed that it was adjusted well-enough. Once that was in focus, the bullet and lipstick looked sharp too. The real test, of course, will be running some film through the camera. 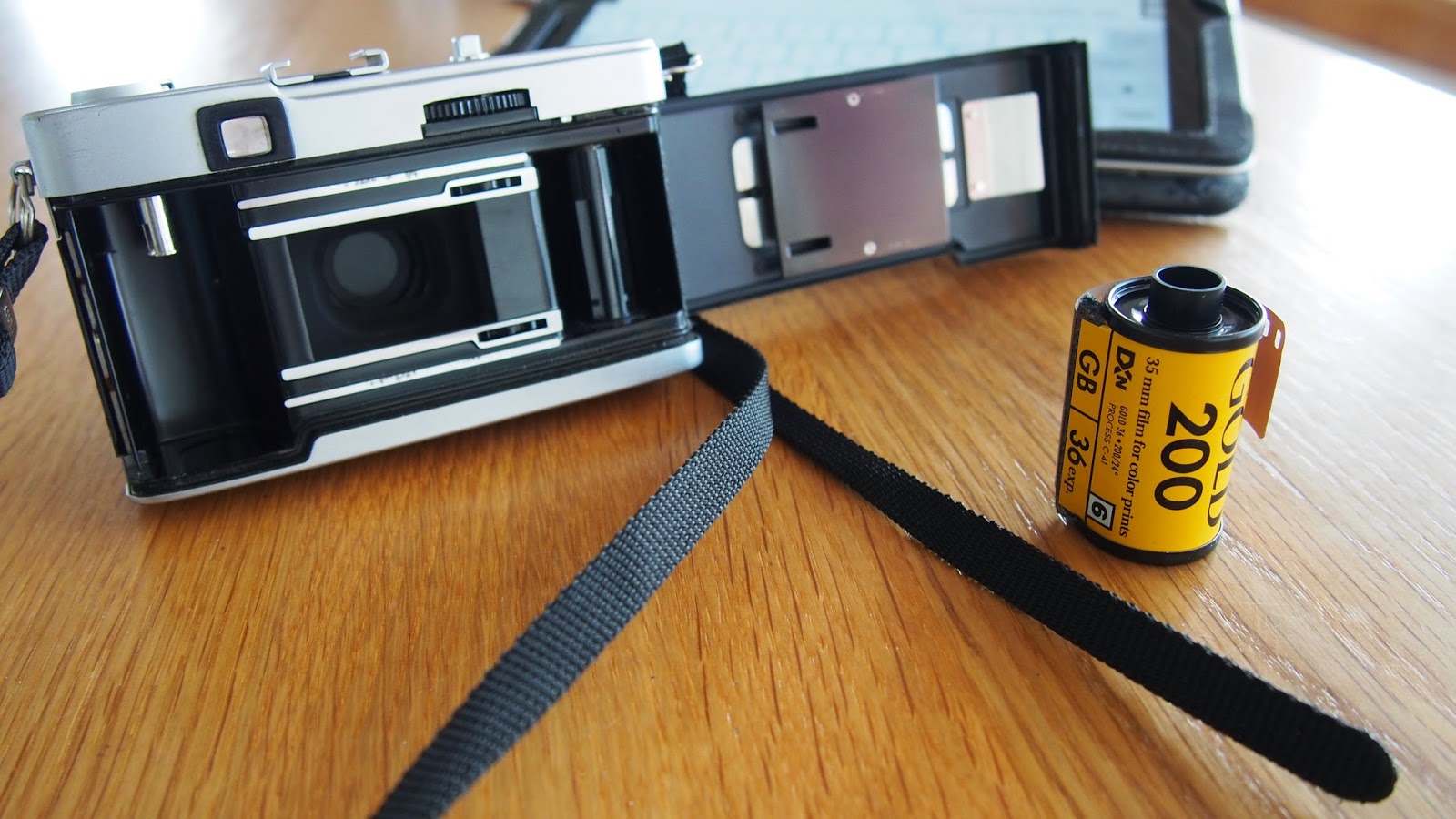 Which I loaded yesterday. Hopefully, they'll turn out fine. The only roll I had was one with 36 exposures. Could take me a week or two to use it up.

As far as 35mm rangefinder cameras go, the Olympus Trip 35 is like a Volkswagen Beetle. Renowned and well-known, reliable, and gets the job done. In production for seventeen years, these were a great point-and-shoot camera that produced very good photos. You could spend fifty bucks or so and get something like one of those plastic Holga cameras that the Hipsters are into, or you could spend a little bit more, or a little bit less (prices vary) and get yourself a Trip 35.
If you do, it's worth saving the three links above. If you encounter any issues, these links will be life-savers.
I should give the authors of these links a special shout-out, since their articles saved me some major headaches.Thanks again!
I look forward to getting some snaps with this camera to see if I've adjusted the lens correctly. The other Trip 35 works fine, but needs some replacement skin, which I'll order soon. May as well jazz these cameras up a little.
I'm going to take a look at the cameras that I have and maybe thin out the collection a little. I have a Nikon EM that I rarely use since I got an Olympus OM-2n a couple of years ago. Same with the 1950s Voigtlander Vito B rangefinder. Now that I have Trip 35s, I don't really need the Voigtlander. Nice looking camera, though.

Still, after three or four months of aggravation, five rolls of film and two previous failed attempts at fixing these cameras, one of which was perfectly fine before I touched it, I figure I'd better keep the Trip 35s.
Both of them.