Well, gang, I missed posting this yesterday evening because I got home from work, had dinner (home-made pizza), and then crashed on the couch. The last thing on my mind was getting onto the internet.
Anyway, back to our scheduled program.

Last Saturday
A spot of gardening with the Seiko SKX031. 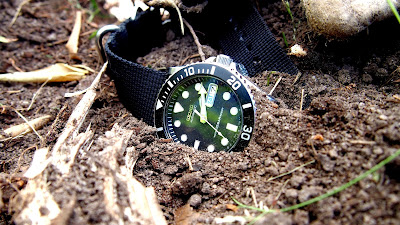 Sunday
Hammering out a post on the 1966 Olympia SM9. Crappy photo of the Omega Seamaster AquaTerra. 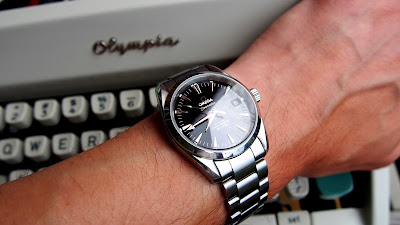 Monday
It rained all day, but I had some "unfinished business to attend to". I had to go back to the Designing 007 exhibition to visit the gift shop and take a few more pics of the Aston Martin DB5 with a better camera.
And a more Bond-like wristwatch. The Omega Seamaster 300 on a Bond-like NATO strap. "Shplendid." 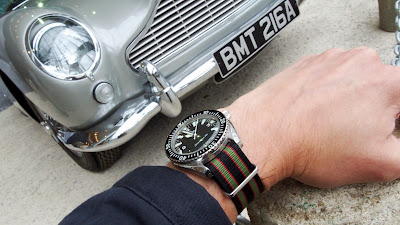 Near the exit was the Aston Martin DBS. Bond's wedding car. 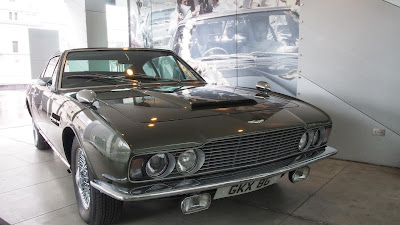 Got home, had some lunch, and then raced out to get a Christmas tree. I drove past the nursery that was selling trees for $55 and wound up at the market garden where my wife bought last year's tree. I drove down a pot-holed muddy dirt track and parked in a small clearing. About fifty feet away stood a large guy with a shaved head. He was wearing a transparent blue plastic raincoat as the rain pelted down.
Oh yeah, he was holding a chainsaw. He looked like the kind of guy that disposes of bodies for Tony Soprano.
"You're gonna get whacked here, Teeritz. Double-tap to the back of the head, then this dude's gonna carve you up and bury you here, less than 1k from home. Cops'll never find the body", I thought to myself as I switched off the engine and put on my hat.
He turned out to be a cheerful fellow. All the trees were about four feet high, except for one. So I chose that one.
"That one's sixty", he said to me as he pulled the cord on the chainsaw. Six seconds later, I was lugging the tree to my car. 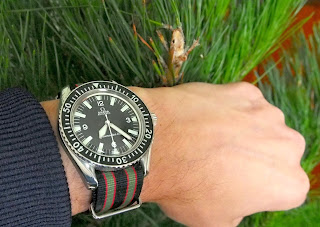 Tuesday
Worked. Still had the SM300 on. 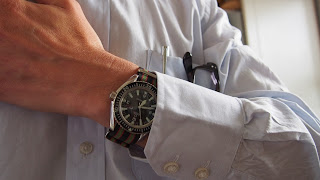 Wednesday
Worked, but switched over to a the '68 Omega Seamaster Chronometre because I needed a watch that had a date on it. Finally started reading "Journey Into Fear" by Eric Ambler. I love his writing. I've only read two of his other books and so the hunt begins for some of his other work. Should have bought more it back in the Eighties when it was more readily available. Here's my Penguin Classic Crime edition, along with another unfashionably wide tie. Like I care. 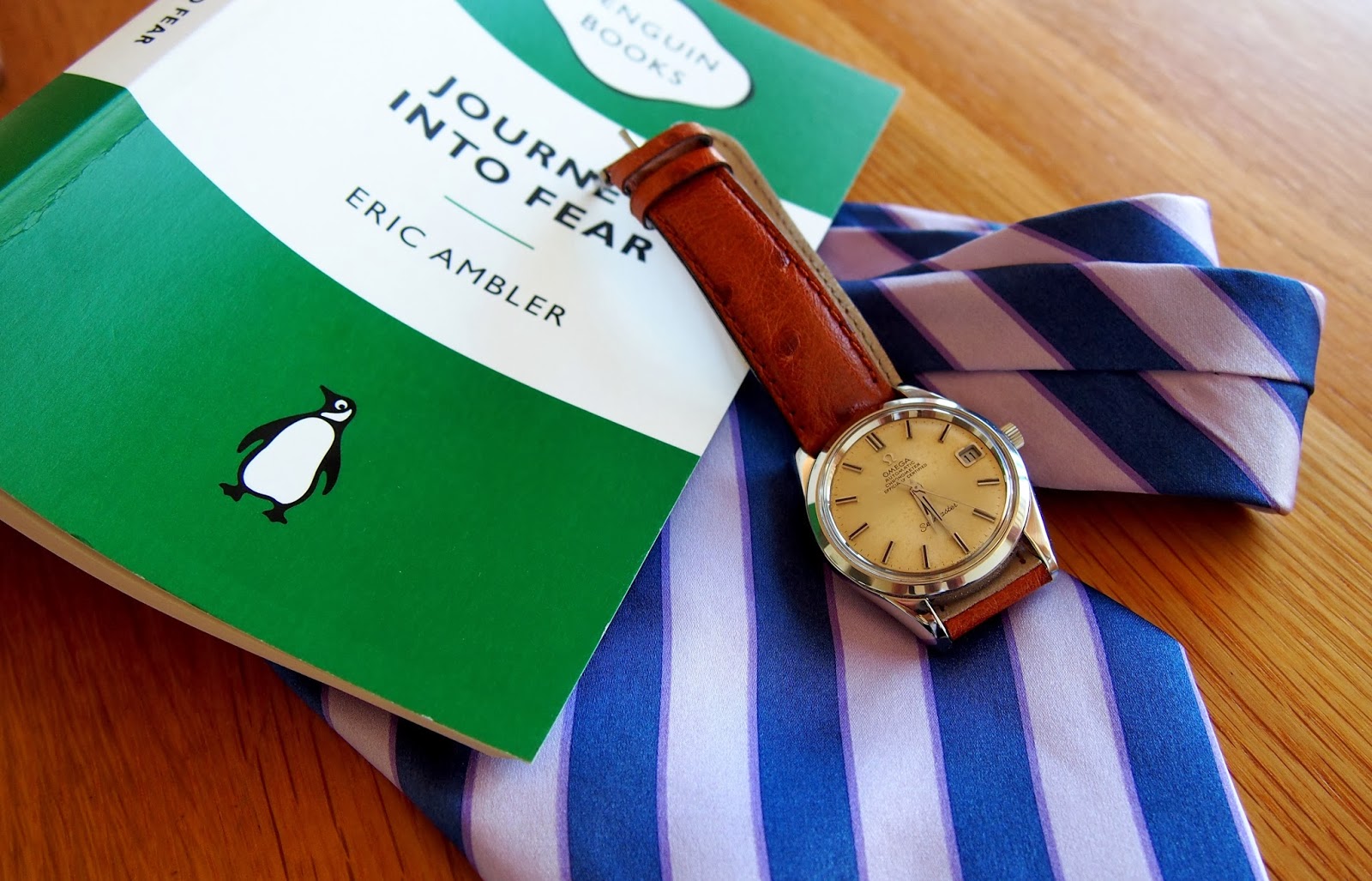 This story concerns an English engineer, named Graham,  who works for a British armaments firm during the early months of World War II. He has just concluded some business with the Turkish government and is about to return to England. On his last night in Istanbul, he meets a ballroom dancer at a cabaret nightclub and an attempt is made on his life a few hours later when he returns to his hotel. Wounded, he goes to the police where he is told it's better if he leaves Istanbul immediately, rather than make an official report of his attempted assassination, since there's no description of his attacker (beyond a strong odour of rose-scented after-shave) and it is of national importance to both Turkey and England that he arrive back in London safely to give his company the specifications of what he discussed with Turkish officials.
That's as far as I got. Beautifully written. Spare, clear, and authentic. Reading Ambler makes you realise that Ian Fleming owes a great debt to this predecessor of his.
Thursday
Worked, and still had the '68 Seamaster on. This job of mine is temporary in the lead-up to Christmas. I work today and tomorrow, then a couple of shifts next week and that's it. So far, it's been pretty good in many respects. The owner is a terribly nice guy and I like his business-sense. He has a pragmatic approach to things. The products are nice and well-made, and the customers have been great, making it a pleasure to serve them.
But there's one aspect of the job that doesn't sit well with me. I'll say more about it next week.
When I got home from work, off came my tie. I grabbed a large tumbler from the kitchen, three ice cubes, a double-shot of Dewar's 12 Year Old Special Reserve (relax, it doesn't taste as flashy as it sounds) and topped it off with Coke. It was that kind of day. Thanks to that one aspect of the job that doesn't sit well with me. 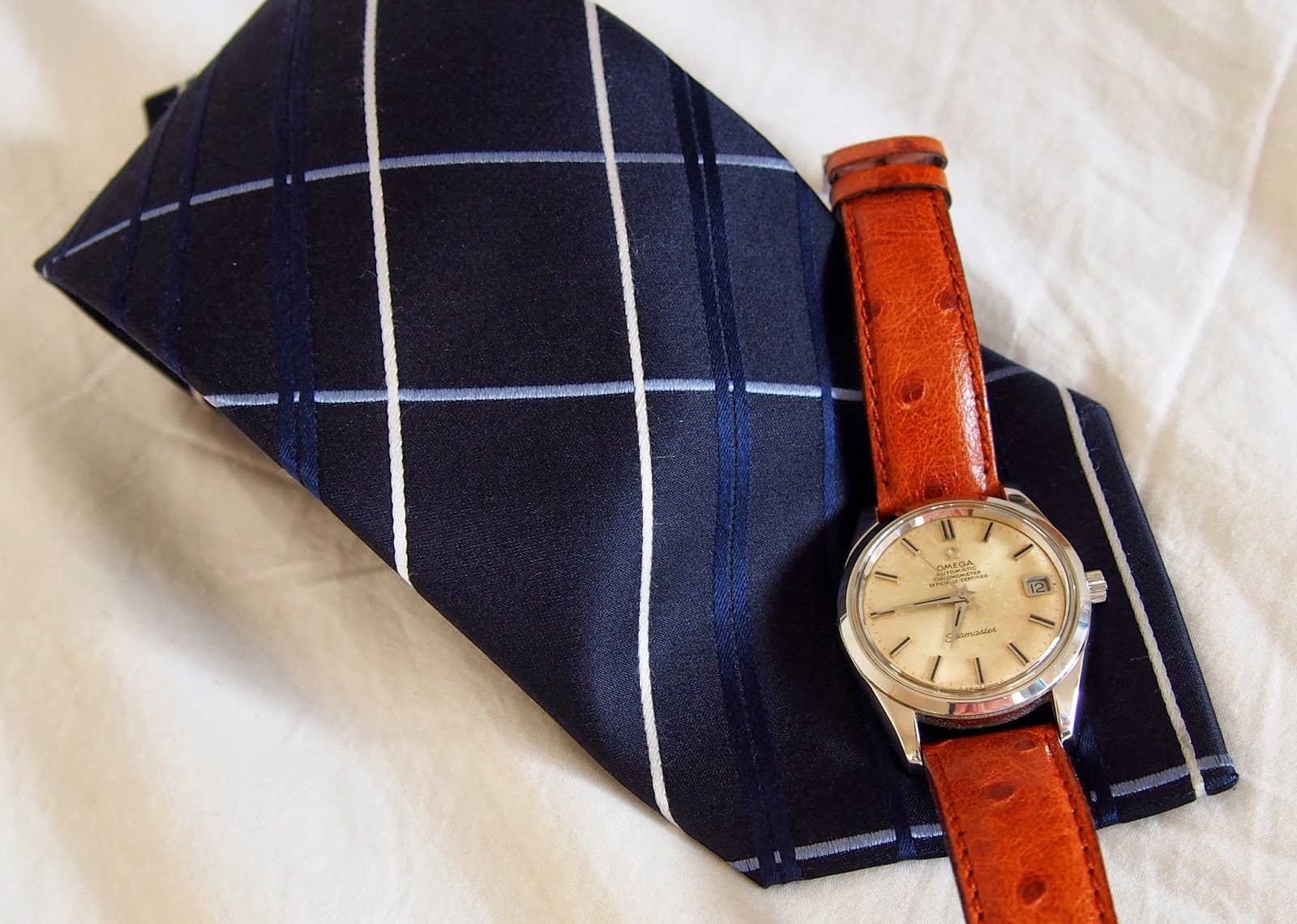 Friday (Yesterday)
I was beginning to lose slight track of what day it was, because they all felt the same to me this week. So I switched over to something that had both date AND day. The Camy Club-Star. It sported a NATO strap with a stripe pattern. These straps often use the colours of British regimental forces, but I'll admit I'm not up on the exact colours used by specific military forces and regiments. 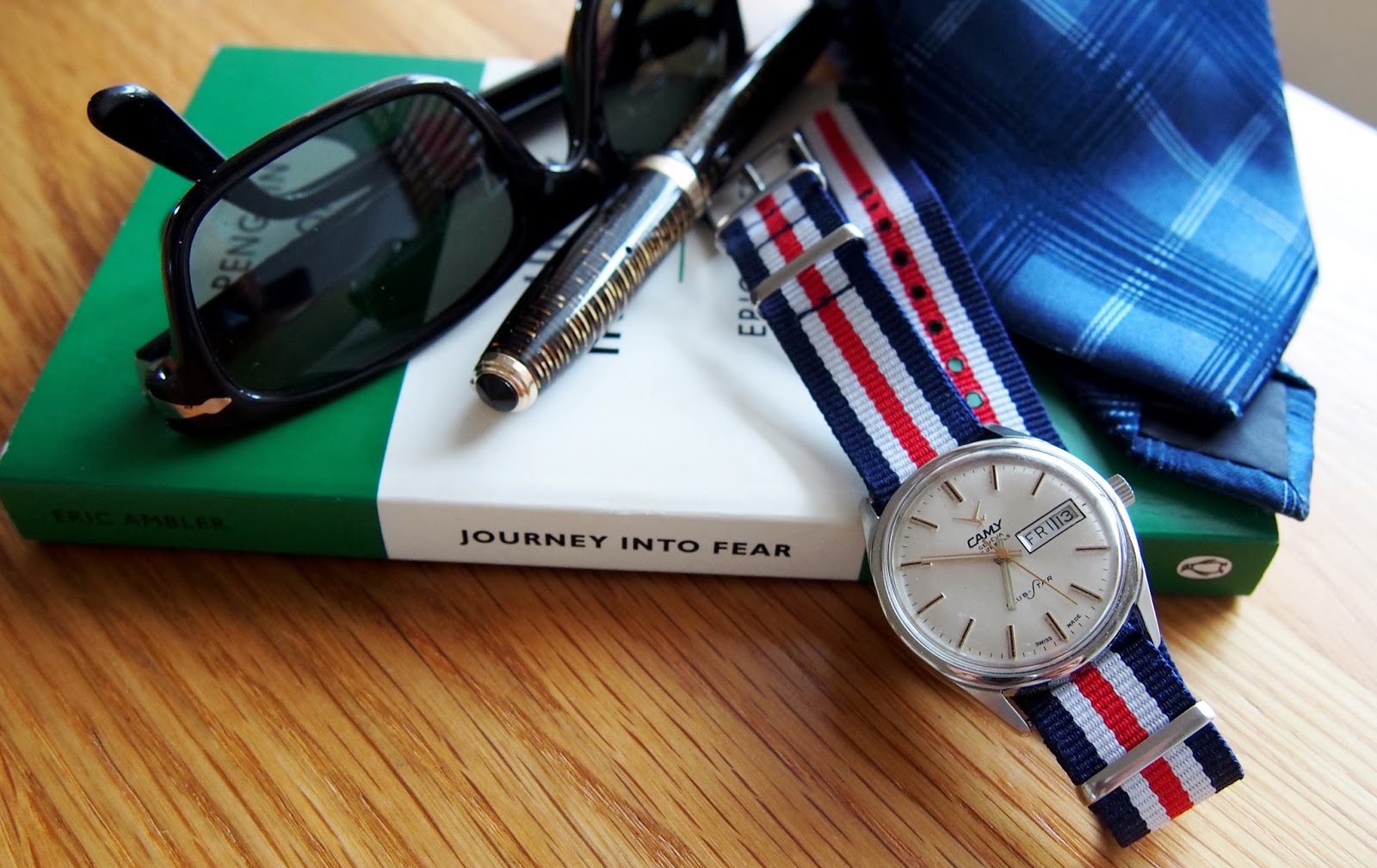 This strap seemed to suit this watch perfectly at the moment as I continued reading the Ambler book. Our hero, Graham, has eluded any further attempts on his life and has quickly been placed on board and Italian steam-ship destined for Genoa. The ship is a cargo vessel, but it does have room for up to ten passengers, although this is not, strictly speaking, what the boat was designed for. Graham is aboard with a small mix of other passengers including an old French couple and an elderly German doctor. This, of course, leads to friction. This is wartime, after all, monsieur.
And, also aboard this ship is the ballroom dancer that he met in Istanbul. Her name is Josette and I have to say that she's a nicely drawn character. Very alluring. But Graham has a wife back in England.
After the ship docks in Athens for a day, Graham goes ashore to take in the sights and buy English cigarettes and books and when he returns to his cabin on board, he detects a scent of roses in the air, and is later informed by other passengers that another traveller has come aboard.
The story unfolds nicely and you begin to get a sense of the walls closing in on our hero, a man not equipped to deal with professional killers out in the middle of the Mediterranean Sea.﻿
And that's my week, folks. I hope yours has been smooth and that you're all up-to-date with your Christmas (or whatever you celebrate) shopping 'cos it just gets more hectic as it gets closer to December 25th.
And have a great weekend!
Posted by teeritz at 19:17