Getting On The Stapler Bandwagon - The Velos 'Slector'.

I wonder if we'll all look back on this period in The Typosphere, around Christmas 2013, and ask ourselves what we were all thinking?
Will Internet Historians (now there's a future career path!) look at this little corner of the web and be dumbfounded by this sudden burst of enthusiasm over this relic of the past, the humble stapler? No home should be without one. A stapler is one of those handy little contraptions that people don't give a second thought to but, if they are anything like me, will walk around the house cursing when they can't find one to attach a couple of sheets of paper together.
I think we have two modern staplers in the house. One is a cheap black plastic-handled thing that we got from an office supply chain-store about two years ago, and the other is a steel model that my brother 'liberated' from his workplace sometime in the Eighties. When he moved out of home around 1988, he forgot to take it with him. And since I was doing a little writing back then, I figured I could make better use of it than he.

However, some of you may think the same as I do, in that, once you start regularly using typewriters, you begin to feel that you need other home-office items from the same era of the 20th Century.
Given that it's a dream of mine to wind up with a study that resembles the Writer's Building at the Warner's Lot, circa 1947 (See "Sunset Boulevard", Dir: Billy Wilder, 1950 for some form of clarification), I figured I would require some office items to help replicate that look.
So, I needed a vintage stapler.
A quick trawl through eBay a couple of years ago brought me to this nice Velos "Selector' stapler, which I'm guessing dates back to the mid-to-late 1950s. 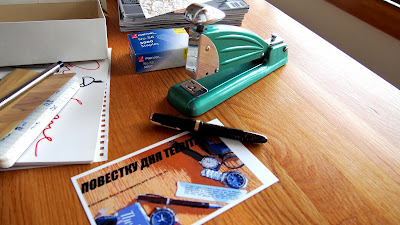 It's all-steel, which would explain why it's still intact after decades of use, and it's got a nice, pleasant metallic green paint-job with some raised stripe detailing on the sides for those times when you need to staple paper fast! 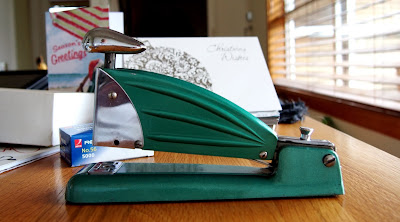 It has the model name engraved on the front; 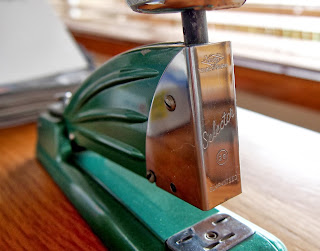 And it even came packaged in its original box; 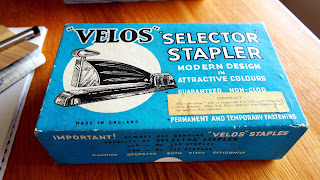 Perhaps its one drawback would be that, being so narrow, you need to push down directly from above to avoid it slipping sideways, but I have to say this hasn't happened to me yet. Despite the stripes, I've never been in that much of a hurry to secure two sheets of paper together.

It works very nicely. I may have given it a dab of oil here and there when I first got it, but aside from that, it's still sturdy and works securely. With a coolness factor that's through the roof.

Well, gang, that's my addition to the Stapler Craze of 2013. Bound to drive the historians nuts!

Historian 1 - "Hey Bertrand, what are those long cylindrical things on the table next to the stapler?"

Historian 2 - "I believe they were called 'pens' back then, Myrtle. What you did was, you'd hold it in your hand and drag one end of it across something called paper. I'm told it was used as a communication tool. People used them at home, at work, even children used them in schools, which I think sounds extremely dangerous and irresponsible."

Thanks for reading, all, and have a great time off!