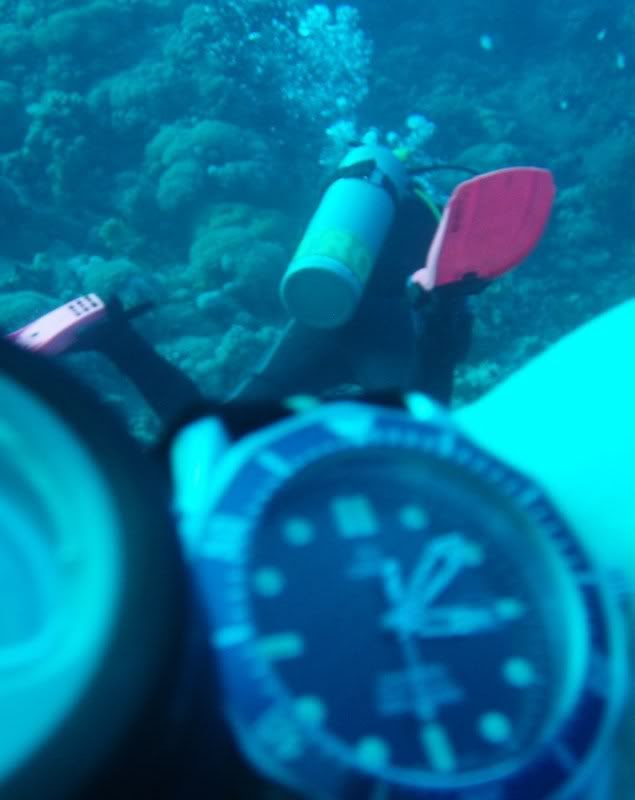 
Nazzareno drifted ahead and down towards the coral. James Bond stayed suspended where he was, noting that only an Italian would take the time and trouble to colour-coordinate his diving outfit. Black wet-suit with pink fins!
"A man muzt look good faw da feesh, Jems.", Nazzareno had said in the boat while they prepared for the dive, his eyes scanning every inch of Monica Purdey's body as she sat languidly at the wheel. She wore one of Bond's light blue Geoffrey Beene cotton shirts knotted at the waist over a black and white one-piece Dior swimsuit. Bond gave a short laugh into his Sherwood SR-1 regulator, sending a burst of bubbles up toward the surface of the clear blue water off the coast of .

This man, the Head of Station I in , was the very definition of the term 'bon-vivant'. Tiberio Nazzareno was just twenty-one years old when he completed his two years of National Service and joined the Italian Carabinieri back in the mid 1970s at the height of The Red Brigade's wave of kidnappings and bombings. He quickly rose through the ranks, but grew disgusted with the level of corruption and lack of morality within 's legal system. So, the day after his thirtieth birthday, he resigned from the Police Force and offered his services to SISMI, 's Military Intelligence and Security Service. The SISMI weathered its fare share of scandals until 2007 when the Italian government, under Prodi's leadership, introduced sweeping reforms designed to allow closer scrutiny of the country's Intelligence services. The SISMI was disbanded and Nazzareno was quickly transferred into the AISI, the department responsible for internal intelligence gathering and security. The new War on Terror had shown him just how fragile life could be, so nowadays, if there was an opportunity to pursue pleasure, then Tiberio Nazzareno would pursue it with a vengeance. To a great extent, he was a reflection of James Bond himself and, as such, he was one of Bond's favorite people in the intelligence business.

Bond's thoughts turned back to the mission at hand. He glanced down at his Omega Seamaster Professional. The skeleton hands showed 3:08pm. They'd been down there almost 30 minutes and he doubted they would find the flight recorder. In the distance to his left, he could just make out the outline of the Gulfstream V's fuselage section. Directly below him was the left wing of the aircraft which had sheared off from the main body upon impact with the water.

He turned back to see what Nazzareno was up to, only to see a spear hit the man's back. The aluminium tip had gone right through Nazzareno's heart, killing him instantly. The snug fit of his wet-suit allowed only a small plume of blood to emerge from the wound as Nazzareno's lifeless body began to drift away from Bond's vicinity.

Bond spun around as he brought his right knee upward and withdrew the Mission MPK12-Ti dive knife from the rubber sheath strapped to his calf. As he turned, Irina Markov lashed out with her left hand and he felt a stabbing sensation in his right shoulder. He swung out the titanium-bladed knife, but Markov was already out of arm's reach.

The pain began slowly. His right shoulder burned mildly, but the increase in his discomfort was rapid. The pain spread down his arm. Bond looked slowly to his left and could make out the murky shape of Markov as her powerful legs kicked her away from him. He saw her let go of the thin lancette and briefly watched it spiral towards the ocean floor. He glanced at the Omega Seamaster Professional strapped to his wrist. The inky-blue dial was beginning to blur. The poison was acting quickly. In minutes, he would find it hard to breathe. Paralysis would follow soon after and he would then suffer a cardiac arrest ten metres under water off the coast of .

Bond felt a sudden bolt of nausea slice through him and he vomited into his mouthpiece. Clumsily, he reached up and pressed the purge button on the Sherwood regulator which ejected the blockage from the mouthpiece. He was slightly repulsed to see an array of colorful marine life appear from nowhere to devour this pre-digested mixture.

Bond's breathing became laboured, as though he was breathing through a straw. He turned to see the thin outline of the anchor chain a few feet away. To Bond right then, it may as well have been a few miles.

With a Herculean effort, he lashed out with his legs and drifted like a leaf in the wind towards the chain. His right arm now felt as though it were on fire. His body bumped into the chain gently and he wrapped himself around it. With the remaining vestiges of his strength, he tugged on the chain with his left hand and hoped that Monica would see the pre-arranged distress signal and haul him up to the surface. Bond knew that, unless she moved quickly, he would be dead in ten minutes.
He waited...
Posted by teeritz at 04:09