As a life-long Bond fan, I had finally gotten around to starting a Bond film script quite some time ago, but finding the time to write just seems to be an impossiblilty sometimes. Since I also hang out on an Omega wristwatch forum, there are countless photos of watches that get posted up all the time. One of the forum members, M4tt, put up a picture last year and he entitled the thread; "Bond-like watch in a Bond-like Location".
For those of you who are unaware, Ian Fleming equipped the literary 007 with a Rolex Oyster Perpetual wristwatch back in the 1950s and, because we watch collectors are a pack of nuts, there has been much discussion over the years as to exactly which type of Rolex watch Bond actually wore in the books. Fleming's description didn't go much beyond "a watch with a dark face with large phosphorous numerals", many have argued that he wore a Rolex Explorer, which was the only model in the Rolex line-up that had a black dial with four numerals at the cardinal points on the dial.
M4tt doesn't own a Rolex Explorer, but he does own a watch with a similar look, which is made by a company called MKII.
Anyway, I felt a sudden flash of inspiration when I saw the picture and below is the result. It's a little simple, but I didn't want to edit it too much. 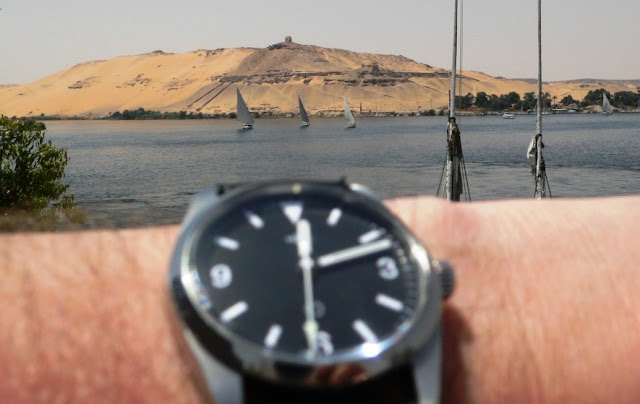 Bond glanced out at the three sails moving at a bovine pace on the water before lifting his arm to look at his Rolex Oyster Perpetual. Its dial showed 12:12pm. Fouad was late, dammit!
Oh well, he thought, to hell with him! It wasn't Bond's job to baby-sit this Diplomat through this revolt. If wanted out, it was fine by him. Bond would be glad to be back in his flat off King's Road in . He was beginning to tire of these textbook missions M had gotten him onto lately. And was getting hungry, anyway.
His gaze returned to the three boats as a familiar shape caught his eye from the vessel on the right. Even from this distance, he recognised her. He lifted the World War II-surplus Sard & Spencer binoculars up to his eyes and peered through the lenses. Yes, she looked exactly the same as she did in the photos he had seen in M's office. The ones taken seven years earlier. Time had barely tainted her. The long legs looked muscular as she nimbly tip-toed over to the beach towel that was sprawled on the deck before draping her lithe figure onto it. The light breeze tickled at her long dark hair, giving the impression of a flame made of night and though the sky was slightly overcast, her tanned body shone like a beacon. Bond's cruel mouth tilted upwards at the corners into a thin smile.
It was her alright.

As he lowered the binoculars, he caught a glint from the deck of the boat to the far left. He quickly raised the lenses up again, aimed them at the boat and, in a split-second, made out the shape of a figure lying down holding a long dark tube pointed directly at him.

The end of the tube emitted a brief orange flash. Bond was already diving to his left as he heard the delayed crack of the rifle shot pierce the air. Years of training and working in the field had honed his reflexes to a cat-like state. The bullet clipped the frame of an empty beach chair as Bond's forearms collided softly with the sand. He heard the barking voice of Simmons, the Service's Jiu-Jitsu instructor, echo from his memory; "Don't go rigid, Bond, roll with it, man!"
The momentum of his leap further propelled him forward in a fluid roll and he landed behind the relative safety of the cobble-stoned drinking fountain.
Bond reached for his Walther PPK, nestled in the Berns-Martin holster on his left hip, hidden by his pale blue Sea Island cotton shirt.
Yes, it was her alright, he thought...
And he recognised her tactics. She hadn't changed one bit. Not in looks, not  in methodology. It was a classic Irina Markov strategy. She had often used her looks as a distraction and then next thing the target knew, a bullet or blade would tear their flesh from nowhere. Death would descend like a cold, dark veil. Bond knew that his pistol was useless against the sniper. The eight 7.65mm rounds in his Walther were deadly at close range, but at this distance, totally useless. But then, Bond knew that the sniper's job was not to kill him, but merely to keep him pinned down in one spot. Markov had other plans for James Bond of the British Secret Service. No anonymous sniper's bullet from a converted Soviet Mosin-Nagant bolt action rifle for him. Markov had a grander death planned for 007.

A slightly battered burgundy Citroen Traction Avant 15 slithered to a halt at the kerb thirty yards away from Bond. Four men in grey suits got out of the car. One man, the driver, raised a walkie-talkie to his ear and listened briefly. Then he turned to look in the direction of the drinking fountain where Bond crouched.

He quickly scanned the surrounding area of the beach. It was a secluded stretch of sand and, as such, no other souls were around when the shot was fired. She had planned it very well. It was rumored in intelligence circles both East and West that Markov was the Soviet's greatest assassin. And now she had come for him. Bond felt flattered to a certain extent.

He turned to look up and down both sides of the street where the concrete footpath met the sand. Deserted. It was midday, after all, and most people were having lunch before partaking of an afternoon siesta. It would be hours before anyone else appeared on this beach again.

This was it. A situation he had faced numerous times in the past. And, to James Bond, it always felt like the first time. He felt the muscles in his solar plexus tighten into coiled tungsten as he pulled back the slide of the Walther, feeling the reassuring, solid click of a round sliding up into the chamber.
The four men reached into their jackets and withdrew pistols. They fanned out slightly in an amateurish attempt to outflank Bond.
Hired help, he thought to himself. This was going to be easy...

EDIT: I felt this needed an introduction.