When it came time for the next installment, I found it easier to set it in the present day. So I transported Bond's nemesis, Irina Markov into the 21st Century. Once again, I based it on one of M4tt's photographs. 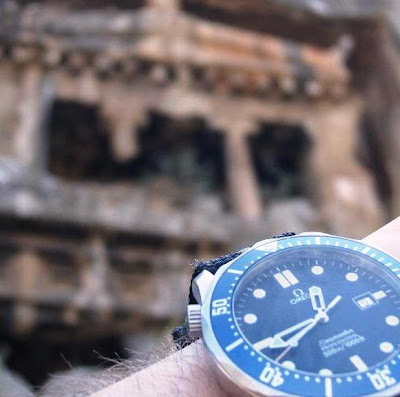 ﻿
Bond raised his arm and glanced at his Omega Seamaster Professional. The dial showed 12:44.  Damn Q Branch for supplying him with a quartz-operated watch!, he thought to himself. Bond despised the lack of craftsmanship that went into the manufacture of a battery-operated movement. The monotonous ticking of the watch merely reinforced his opinion that this type of timepiece possessed no soul. Some of the staff in Q Branch thought him a Luddite at times because of his attitude towards modern electronics. And though these products of the digital age had often saved Bond’s life, he felt they had no place in an otherwise finely crafted wristwatch. He would have a quiet word with M when he got back to . Still, he knew why he’d been supplied with this particular wristwatch for this mission. And now, circumstances had forced him to rely on Q Branch’s modern electronics once again.

He pulled out the helium-release crown located near the ten o’clock edge of the watch to activate the distress beacon. By his estimation, the Jet Ranger would be there within ten or twelve minutes. Safely nestled behind the rocky outcrop, he looked down at his leg. The bullet had nicked his left thigh and the wound was bleeding steadily. And Irina Markov was still perched on the uppermost section of the tombs.

But that had been her last round. Bond had counted out her shots. Her SVD Dragunov rifle was fitted with a ten-cartridge box magazine crammed with steel-jacketed 7NI rounds which were designed solely for the art of sniping. It was Bond's favorite long-range sniper rifle. Some had called this gun heavy, but Bond preferred the reassuring weight of it. Markov had chosen well. And despite her repeated and ingenious attempts to kill him over the years, Bond had developed a certain level of admiration and indeed desire for her, the former 's star assassin.

He had often thought about what she would be like in bed. He had surmised that, much like himself, she would be a ruthless lover. But he also knew that to put the two of them in the same room would be equivalent to pouring two Siamese Fighting fish into the same tank of water. They would slaughter each other beautifully.

Her first nine shots had been wasted, but the tenth bullet had literally cut his leg from under him. The force with which he had hit the ground had knocked the wind out of him, leaving him just enough strength to crawl to the small rock formation for cover. She was out of ammunition and would have to get closer to Bond in order to kill him.  He guessed it would take her ten minutes to get down to him from the tomb. Five if she didn't care about announcing to him which direction she was coming from. Bond hoped that the descent would drain some of her energy, making her a more predictable opponent.
Either way, he had to work quickly.

He reached down to his other leg and took the Gerber Applegate-Fairbairn Tactical Knife from the nylon sheath strapped to his right calf. Not his usual choice of steel, but he was grateful now that Fatima from Station T in had insisted on him taking it. He would have preferred a blade longer than the four-and-a-half inches he now held, but it would have to do.  He cursed himself for leaving the PPK in the gun safe at Station T, but then he wasn't expecting a gunfight that afternoon.

His thumb met the tiny metal stud on the bottom edge of the blade and flicked outwards. The afternoon sun traced a short arc of silver as the blade snapped into place. Bond quickly cut away the left sleeve of his butter-yellow Sea Island cotton shirt. He placed the handle of the knife between his teeth as sweat began to form on his upper lip. From the pocket of his dark blue Kilgour trousers, he removed a three-ply cotton handkerchief and folded it into a neat square pad. This he pressed against the wound in his leg, biting down on the knife handle to fight the pain which came in relentless waves. He had been in worse states than this before, but had decided that, today, he was not in the mood to be shot at. Bond quickly tied the shirt-sleeve around the padded handkerchief into a tight knot.

Satisfied, he spat the knife into his right hand. His fingers curled around the moistened handle as he stared at the steel blade and thought of all the lives he had ended with a weapon such as this. It was the most personal method of killing. Up close, not from a cowardly (Bond felt) and detached distance. Using a knife was the fastest way to determine who was willing to do what was necessary to get the job done. And who was not. The bodies of those who were not littered the back-streets of Hell.

Bond thought he could hear the faint ‘tukku-tukku’ staccato beat of the helicopter's rotors growing slowly louder. Would it get to him before Markov?, he wondered.
It didn't matter.
Whatever happened next, she would pay for this, he thought...