I decided to try my hand at repairing a couple of old Ronson lighters that I have. I think I have six or seven of them and only two of them work. I figured that I don't need seven Ronson lighters and I'd like to whittle this number down to two or three of the nicer models.
I have to say it was very messy work. And here's a tip for you if you ever decide to purchase an old lighter; you might find one in a thrift store and when you strike the flint wheel, there's no spark. There may be one of two reasons why this happens. Firstly, there's no flint in the lighter. That's an easy fix. You just go out and buy some flints for a couple of bucks.
Or secondly, there is a flint in the lighter, but it has fused itself to the metal of the recess in which it sits. This will require a little more work. And a very small drill-bit.
Of course, whaddaya think happens when you apply steel spinning at high velocity to a flint? Yeah, that's right, sparks will fly, as Mick Jagger once sang.* 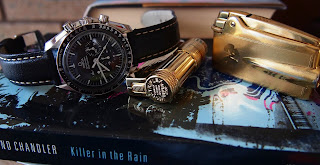 I managed to remove the flint before taking apart the top of the lighter to see if the valve could be removed and cleaned. This was a bigger job than I had the time, expertise or tools for. I think I'll need to Google this procedure before I make any attempts to fix it. Still, I did manage to get this thing working okay. One down, six more to go.
I was wearing the Omega Speedmaster Professional. 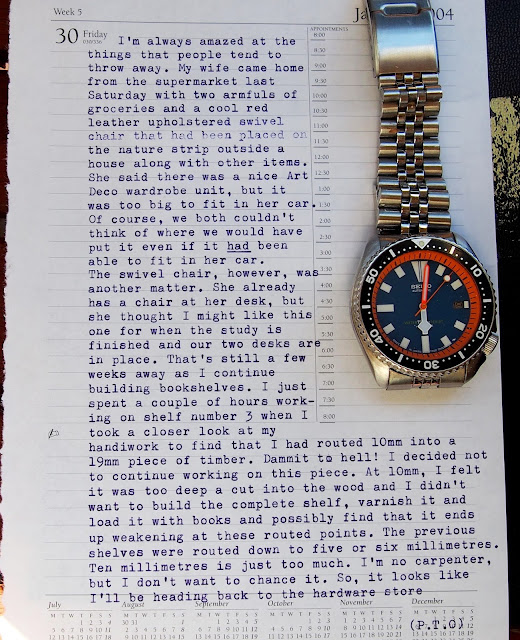 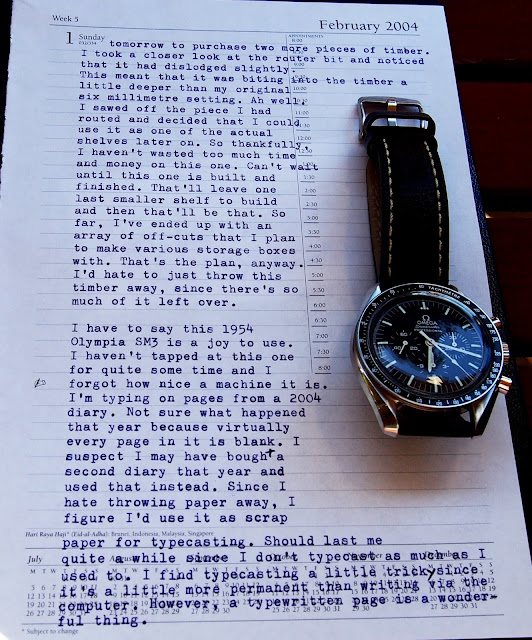 I love the Hesalite crystal on the Speedmaster Pro, by the way. It gives the watch a warmer look. And, engraved in the centre of the crystal is the Omega symbol. You can see it just under the letter 'S' in 'PROFESSIONAL' printed on the dial. 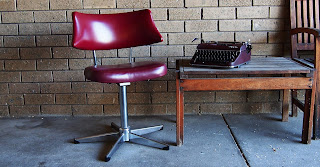 Here's the chair that my wife got, seen here with the 1954 Olympia SM3 that I used for the typecast above. As I say, I'm surprised by what some people throw away. As the study begins to take shape, this chair will be put to good use at my desk. Or my wife's.
The chair is a deep burgundy, almost matching the shade of the SM3. Comfy to sit on, too.

I put on the Rolex Submariner on Wednesday night. As I've written before, this watch will need some service work performed on it someday when finances permit. The crystal and rotating bezel are not 100% securely attached, so I'm loathe to wear this watch outside the house these days until I get this issue sorted out. No rush. I and the watch aren't going anywhere. Plus, it'll feel like I'm getting this long sought-after wristwatch all over again when I get it back from repair. It's pictured here with a four dollar hardback copy of a James Hadley Chase thriller. I've never read any of his work, and his is a name that I used to see often in bookstores back in the '80s.

I bought another length of timber and routed the correct-depth groves into it before screwing it into the bookshelf I'm currently working on. Next day, I gave it a first coat of varnish. It looks good. The weather has gotten colder and we've had a few days of rain this week, so this shelf is on hold for now. Which is fine, since it's given me a chance to rearrange the study somewhat. I was surprised and happy to notice that the study is actually a reasonably sized room once the desks are against the wall. Now I can't wait to finish these shelves so that these tubs of books can get emptied and we claw back a little space here and there.
There's going to be some serious culling of stuff, I can tell you. Throughout my decade of selling wristwatches, I seem to have accumulated a staggering amount of catalogues. At one point, I had considered selling a few on eBay, but I've come to realise that people would rather Google the information than have an actual book in their hands. So, there's no point me holding onto all of these. I'll keep one of almost all of the better ones for my own collection, and I'll give some copies to a watch dealer friend of mine if he want them. The rest of them will go into the paper recycle bin. And that pains me a little, considering how nicely produced some of the catalogues are. 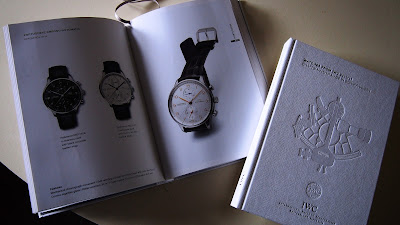 For example, here are two IWC catalogues. They are A5 sized and contain over 280 pages, covering the company's history and watchmaking expertise, and they feature photos of every watch in their line-up for that year. The booklet on the right is even cloth-bound. If this were a book selling in a store, it would cost forty to sixty dollars. These books are beautifully put together.

Which is why I'll keep a copy. I may never purchase an IWC wristwatch (although I've deliberately opened this one up to show my favourite watch of theirs, the Portuguese Chronograph Reference 3714-45 (pic courtesy of www.iwc.com), but I felt it's a nice idea to hold onto these catalogues. 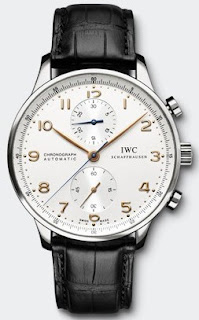 As much as I once thought I'd have some huge study with floor-to-ceiling bookshelves along the wall, filled with all of our books and all of my wristwatch catalogues, the reality is that I cannot keep them all. Truth be told, I have quite a few for brands that I don't much care for, so those will be easy to get rid of.

Then, I'll go through my book collection to see what titles I can offload to a thrift store. I think I have a few too many Lee Child and Robert Ludlum books. Yes, not exactly high-brow literature, but that's okay. I'm sure there are a few other authors whose work I probably won't read a second time. Can't think of their names right now, but I know I saw a few books a couple of days ago that made me wonder why I still had them.
Definitely some travel books will have to go. And we have a surprising number of English dictionaries in this house. One of them was my old copy of an Oxford Pocket edition that I used back in high school. That one will go for sure. Along with a couple of novels that were required reading back in 1996 when I first returned to study to do VCE English. I'm also pretty certain that I have a few double-ups of some crime and espionage thrillers too. You know how it is. You buy a book, put it on the shelf, and six months later, you see that title for sale for five bucks in a remainder bin and you buy it. When you get home, you go to the bookshelf and sure enough, there's the first copy that you bought a few years earlier, perched on the bookshelf, laughing at your absent-mindedness. This haas happened to me about five or six times. 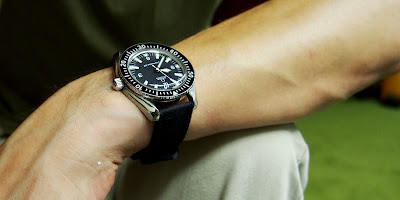 However, given that Tuesday was a public holiday here in Australia, I found myself forgetting what day it was. It was Wednesday, but it felt like a Monday. I hate it when that happens. Therefore, it was time to put on something with day and date. I needed all the help I could get.
So, I got up on Thursday morning and put on the Sinn 103 St Sa Chronograph; 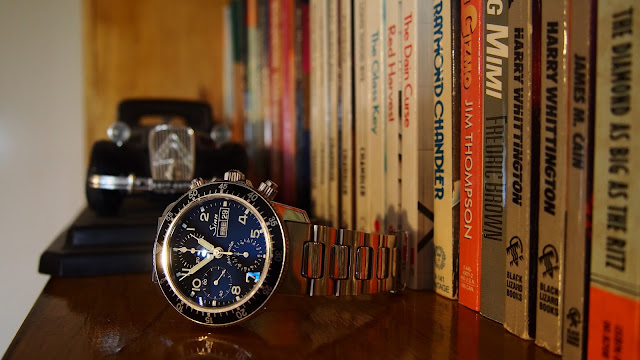 And that's another week done. The kids started school for the year today, so it looks like it's back to business now that the holiday season is well and truly over.
I hope your year has gotten off to a good start, folks.


* Sparks Will Fly was featured on The Rolling Stones' 1994 album Voodoo Lounge.