I think life's gonna get busy again. Not sure how regular these weekly wristwatch posts will be, or how detailed, but I'll try and post something each week, wherever possible.

Last Weekend
Woke up on New Year's day and decided to have breakfast. I was wearing the Omega Planet Ocean and, although champagne for breakfast sounded good in theory... 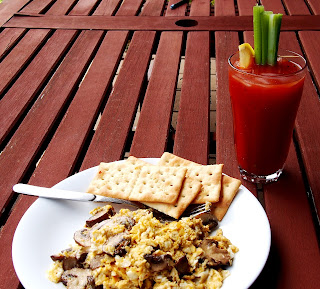 ...I decided I'd play it safer and have scrambled eggs with mushrooms...and a Bloody Mary. I was aiming for a 1950s Hollywood Producer's breakfast. I should have left my bathrobe on to really give it the Palm Springs vibe, but I got dressed instead and slapped on my sunglasses and hat.

45ml of Finlandia Vodka
4 dashes of Lea & Perrin's Worcestershire Sauce
6 (or 7) dashes of McIllhenny Co. Tabasco Sauce
3 twists of pepper
1 squeeze of lemon juice
Topped up in a tall, ice-filled glass with supermarket home-brand tomato juice (it was the smallest can they had. I didn't wanna buy 2 litres of the stuff).

I don't think I've had a Bloody Mary since the '80s! This is not the kind of drink you order in a bar. Unless you have a hangover, which I didn't. I paced my drinking the night before, since I knew I'd be doing it alone. My wife isn't a big drinker and my son is fifteen. But my thirteen year-old daughter wanted to try some champagne.
Anyway, I made myself a Gimlet just after dinner, comprising of 30ml of Bombay Sapphire gin and 60ml of Lime Juice Cordial. In a glass with ice and just a dash of water. It was a pretty warm night in Melbourne town and this drink did its job.

Then it got to midnight (Happy New Year, everybody!!!) and I popped open the bottle of sparkling wine that somebody had given us a few months ago. I poured myself a glass and poured a mouthful into another champagne flute for my daughter.
A few seconds later; "Oh my God, how can you drink this stuff!!!???"

Which was exactly the reaction I was hoping for. I'd like to think that, when my kids reach the legal drinking age of eighteen, they won't be drinking everything that isn't nailed down. I don't expect that they'll be teetotalers (well, you never know), but I'd like to hope that they'll drink in a responsible manner.
As for not drinking in a responsible manner, I had three glasses of 'this stuff ' before that numb-face feeling began to kick in. I think I may have had a Gin & Tonic somewhere in between.
Time please, gentlemen. 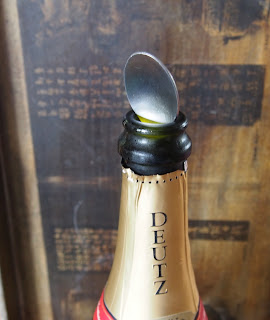 That was it for my New Year drinking. I put the bottle in the fridge, complete with the Italian method for keeping it fresh. This is surely an old wive's tale, but whenever there was a bottle of champagne- or more likely in our house, Asti Spumante- left unfinished, my Mum or Dad would place a teaspoon handle into the bottleneck. They said this would keep it bubbly, since you cannot jam a champagne cork back into the bottle.
There's absolutely no science behind this method, as far as I know, but it's funny how this little trick has such a strong tie to my childhood for me.

Sunday
Bought some more timber to get started on bookshelf number two. I don't want to slow down the momentum of this project, since I think that there will still be two more to build after this one and I don't want to take ages with them. The first one has been up for about a week. Still standing, so that's a good sign.
Once I was done with this shelf for the day, I got out the leftover New Year champagne from the fridge and had a glass. I wore my Sinn 103 chronograph and a t-shirt that my wife bought me when we were in Thailand in 2011;

Monday
It was my birthday. I turned fifty (my God!). Really, there's not much else to say. It's been a tricky few years in the lead-up to this milestone and I have made a few errors of judgement along the way, but here I am. I have my health (reasonably) and a wonderful family. All is good. Gotta look at the half-full glass, gang.
I had to drive about 35 minutes to take a roll of black & white film to get developed. I wore the circa 1969 Omega Seamaster Chronometer; 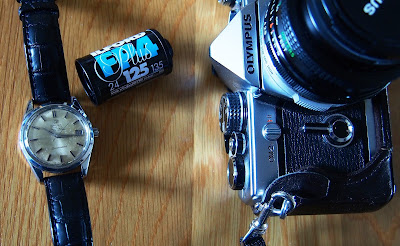 None of the film labs closer to home could process this roll of film, which I bought at a thrift store for 50 cents. Instead of Process C-41, this roll requires B-90.
Never again. Not worth the hassle, considering I'm really only taking 35mm SLR photos of the family, and colour film is the better option for that.
In future, I'll check the packet carefully before buying. Man, I hope this roll turns out okay. 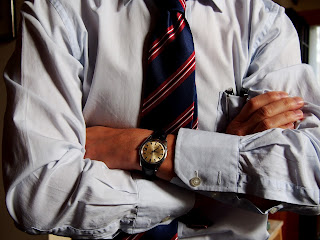 It's a part-time position at a small optometry practice and I'll eventually be there about three to four days a week. I have to say there's a steep learning curve with this job. The operating system for appointment setting, customer details, orders and repairs, etc will take me quite some time to master. Luckily, the person training me is proceeding at a slow and steady pace and I've gotten the hang of a few of the processes in the past few days.
All in all, it should be interesting and it will be good to get a few more skills added to my resume. It all helps.

When I got home, there was a small padded envelope waiting for me. Great! Inside it was a stainless steel Speidel Twist-O-Flex watchband, similar to what my Dad had on his watch when I was a kid. I grabbed the Camy Club-Star hand-wound and my bracelet tools. This band was a little loose on me, so I removed three links. Now it feels just a tad snug, but it looks so 1963! 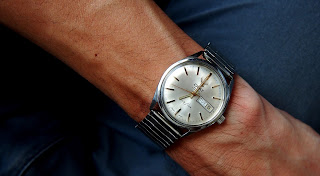 These are a comfortable band to wear on a watch. The only real downside to them is that the section that sits against the watch case's lugs can tend to rub against the steel over time, to the point where it will erode the ends of the lugs. Once this happens, there's not much you can do.
Therefore, I didn't want to try putting this bracelet on any of my more expensive vintage pieces, and I think I'll alternate between this band and a leather strap in order to preserve the lugs on the watch. Now all I have to do is get a gold-toned one to put onto my Dad's Wyler.

Today
My wife and kids are taking me out for an early dinner to celebrate my birthday. We're going to try out a well-regarded Turkish restaurant. Nice. I'm about to have a very light lunch to ensure that I'm hungry later on.
Time to change wristwatch. To provide some separation between work and leisure. I think I'll only wear two or three different watches to this job. Simpler that way.
For now, though, on goes the Omega Planet Ocean, because there's some cleaning to be done around here. 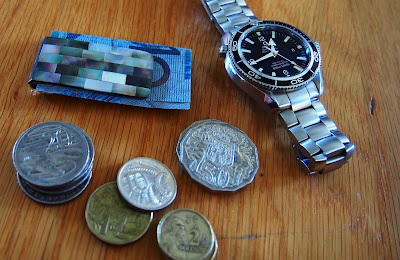 Hmm, seventeen bucks to my name. I've had less.

Thanks for reading and have a great weekend, all!
Posted by teeritz at 18:12