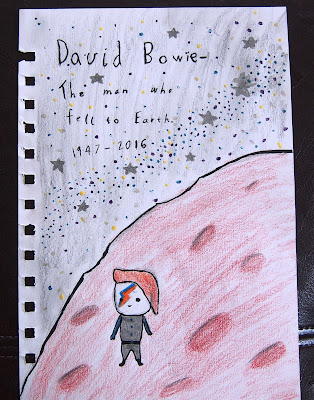 No major highs or lows this week. The new job continues and seems to be going okay, but I'm still on the lookout for something else.

My daughter presented me with this drawing last weekend.
'I used an eyeliner pen for the black lines and some silver nail varnish for his costume', she said.

'I think he would've liked that', I replied.
And felt sad all over again.


I got a small package on Monday. It was a packet of vintage razor blades. A brand called Blu Strike, whose package artwork strongly resembles that of Lucky Strike cigarettes. I bought a pack of these blades from an antiques store back in the 1980s and experienced the closest damn shave I've ever had.
A casual stroll through eBay and I saw a packet of these blades for sale. I hit the 'Buy It Now' button pretty quick.

I haven't begun using any of them yet. They will require a steady hand, if memory serves me correctly. Can't wait. 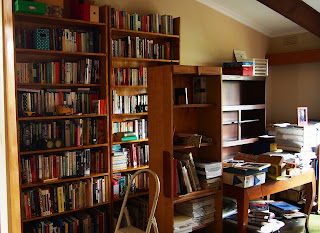 Got the second bookshelf built, varnished, and loaded up. The study is looking quite a mess, to say the least, but it's good to have our books breathing again after almost a decade of being stored in plastic tubs. One more large shelf to build and then a smaller one to hold all of my Bond titles. Hopefully, that'll do the trick. I think it will. Another large shelf, measuring 2.4 metres tall and about one metre wide should be enough for the remaining books with room to spare. Then I can get rid of the two empty-ish shelves that you can see in the photo. Then the desks can be arranged along the opposite wall. It's gonna be a nice feeling when I don't have to look at these plastic tubs anymore.

I wore the Omega Seamaster Planet Ocean for most of the week; 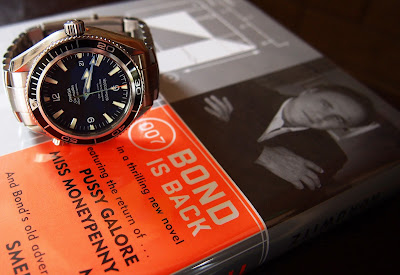 And switched over to the Omega Speedmaster Professional on Thursday afternoon;

Seen here on my hardback copy of Trigger Mortis. This is a signed and numbered edition of the book, which probably isn't as exclusive as one would think. Author Anthony Horowitz joked on Twitter that an unsigned copy of this book is rarer than a signed one. No matter. I just thought it would be cool to have a signed copy. It was a great book. I think I'll probably give it another read in a month or two.

Anyway, it's pouring rain here in Melbourne right now. Got a few tasks to be done, so I'll say 'bye for now.

Thanks for reading and have a great weekend, all!
Posted by teeritz at 18:33