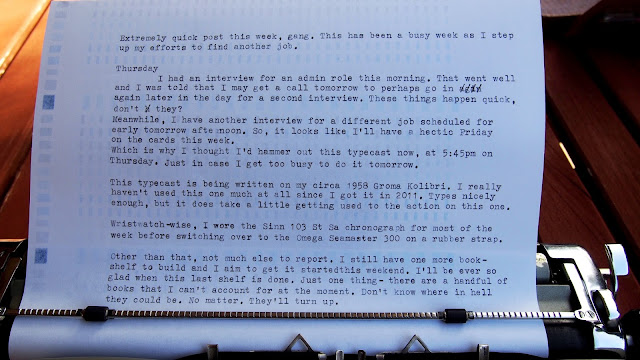 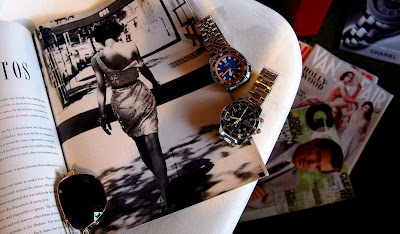 I wore the modded Seiko 7002 on the weekend while I worked on bookshelf number three. My son reminded me about the two bookshelves I'd built for his and his sister's rooms, so technically, this one is actually bookshelf number five. No wonder I'm tired.

Spent quite some time this week sorting through old magazines that I've hung onto for years. I really can't keep them all. Sure, these old copies of Vanity Fair have some great articles on the Golden Age of Hollywood, but I. CANNOT. KEEP. THEM. ALL.
Same goes for the GQ Magazines. I'll keep a few issues of each, if only for the reason that one day, paper magazines won't exist and it'll probably be easier to explain to my grand-children just what the hell they were if I have an actual example to show them.
Also, these magazines have some of the best article writing I've ever come across. I was re-reading a wonderful piece by Tom Junod...

...and for a few seconds, I thought of keeping the issue. Of course, the beauty of the internet is that you can find almost every word ever written if you do a quick search. So, I figure I'll pin a link to this article in this post so that I can find it if I ever want to read it again.
I also came across a copy of The Age newspaper from a couple of days after 9/11; 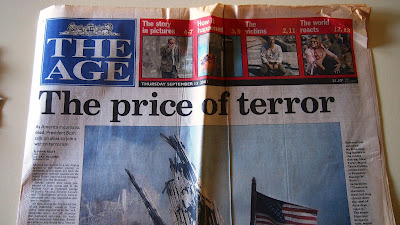 Again, I couldn't hold onto it. For a long time, I've held onto various newspapers and magazines, thinking that I was in some way keeping them for historical or archival purposes. But I think I have enough other things to do without worrying about various forms of print media in the late 20th Century and early 21st Century.
One other interesting bit of paperwork was this from the Ronson Repair Centre in Glendale, California; 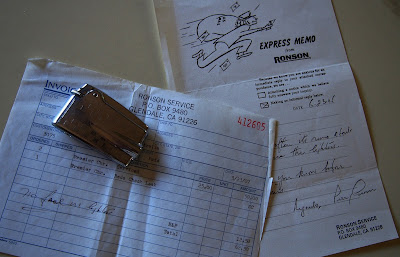 When I first received this repair invoice in the mail, I thought it cool that I had gotten a typewritten document from Glendale, California. I kept the 'express memo' (how could I not? It's super-cool!), but threw away the invoice. I'm sort'a kicking myself now. Here's a close-up of the typewriter font; 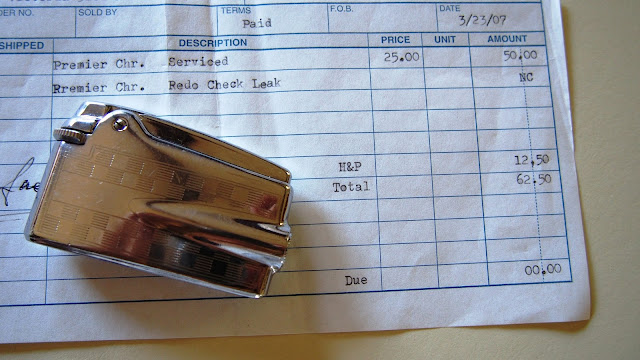 Actually, scratch that. I just found the invoice. Because it has my name and (old) address details on it, I had it sitting in a pile of paperwork due to be shredded this weekend. Okay, this invoice is gonna get some use as a bookmark from now on.
And, I'm thinking this typewriter is a Royal, based on the number '5' font, but I could be way off. If any of you are ever passing through Glendale, maybe look up Mr. Perry Grover (a gent, based on my few minutes of conversation with him over the phone back in 2006) and ask him directly.

Anyway, I wore the Sinn 103 St Sa chronograph for most of the week (old picture);

And then switched over to the Omega Seamaster 300 just before I wrote the typecast up above; 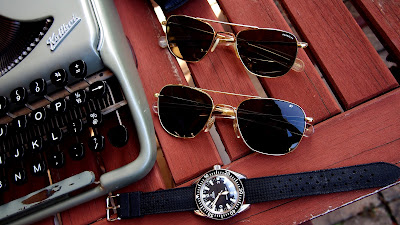 Here's the Omega sitting next to the Groma Kolibri and my two pairs of aviator sunglasses. One pair is by Randolph Engineering and the other is by American Optical. The Randolphs are a little worse for wear because I wore them quite a bit over the last decade. I'm probably due for a replacement pair, no doubt, but since I have the other pair by AO, I don't seem to be in a great hurry to get another pair of Randolphs. Especially while the Australian Dollar is getting me around 72 US cents. Nope. I think I'll wait a little while.

Anyway, gang, that's this week. It's now about 10:20pm on Thursday night. Tomorrow morning will be tranquil enough, but I think things will start getting hectic when I make my way across town to go to this job interview in the early afternoon. I may get a call from today's interviewer while I'm there. Ah well, if it does end up being a hectic day, then this is the right kind of hectic.

Thanks for reading and have a great weekend!
Posted by teeritz at 03:23