As I race toward completion of the final bookshelf, I find that this one will pose a few problems. I knew this would happen. After all, I was being a little ambitious with this one. This shelf is meant to hold all of my Bond books. With a bit of luck, there'll be enough room left over to house all of my other espionage fiction as well. Although, now that I think about it, the Le Carre's, Deightons and the rest of the spooks may not all fit when all is said and done. Find out soon enough, I suppose.
Anyway, like I say, I was being a little ambitious with this one. I wanted to give this one 'something' besides two coats of varnish. 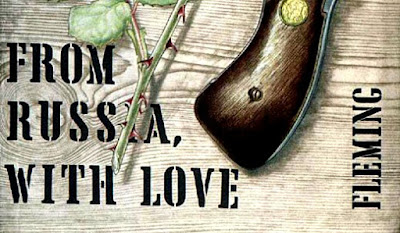 So, I printed out the lettering that I planned to use. I used a font called 'CargoCrate'. It basically looks like this here on the right------------->

Yep, the stencil lettering, as seen on those classic Richard Chopping Bond covers of the '50s and '60s.
Now, my printer didn't manage to print this lettering out as large as I wanted it, so a trip to OfficeWorks was in order. I would photocopy it onto A3-sized paper. As a precaution, I ended up making six copies. Just in case I stuffed up the next stage of my plan.

I waited till the weekend before attempting the next phase. I had a feeling it would take me some time. I placed a sheet of the lettering onto a cutting board and then got to work with a Stanley knife (Exacto blade). This took quite a while because I wanted to be sure not to cut the thin portions of the letters.
Managed to cut them all out. So far, so good. Next, I taped the edges of the paper to the panel of timber. I raided the art box and got out some black acrylic paint.
Using a thin brush, I dabbed at the inner edges of each letter. Admittedly, I was aware at times that I had too much paint on the brush, but I persevered regardless. And this was the result, dammit!; 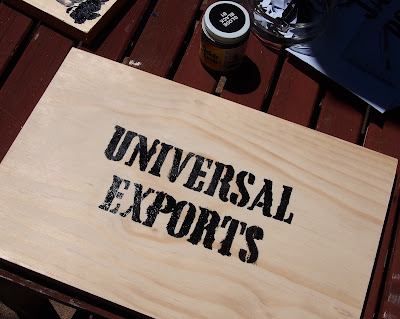 As you can see, the paint bled through in some spots, and seeped into the edges in others. All in all, it was a little more half-assed than I would have liked.

Once the paint had dried, I got the sander out and spent about ten minutes erasing this attempt. Would have taken me less time to just cut another panel of timber. Here's what I've learned about Dressed Pine; it is thirsty, thirsty wood. If I didn't know any better, I'd swear that this black acrylic was absorbed half-way into the timber.
Back to the drawing board.

I grabbed copy Number 2 and some Contact paper, or whatever the hell kids call it these days. You know, that adhesive clear book covering plastic. Actually, now that I think about it, I doubt there are many kids these days who even bother with covering their schoolbooks in plastic.

I cut out a sheet of Contact and laid in over copy Number 2. Then I got to work with the blade again.
Stupidly, I once again used the paintbrush to colour in the lettering. And once again, I ended up with a blotchy result. Now, I wasn't after perfection. I wanted it to look like a human hand had done the stenciling, but I did want a sharper result than this.
I reached over for copy Number 3.

Okay, one more try. If this didn't produce a suitable result, I go back to my original plan of photocopying the letters onto the thinnest tracing paper I could find and then using decoupage to apply it directly onto the timber. However, given all the 'learning' I've been doing lately- Studies, routers, optometry, ERP software- I really didn't want to stumble my way through something new.
I could have used a can of black spray-paint and given it two quick passes, but I couldn't be faffed going to the hardware store again.
So, I fished around for some sponging that I had stashed away someplace. Yep, there it was, in amongst some watch polishing cloths. While I was doing this, the sheet of cut-out Contact paper had dried. Good. I was gonna use it again.
I dabbed some of the acrylic onto a scrap piece of timber and gave that a quick dab with the sponge. Working quickly, and with a light touch this time, I tapped at each letter.
Did it work out? I'll tell you at the end of this post, ahh, ha, ha, ha, ha, ha, ha, ha, ha, haaaa!!!!!

As for wristwatches, I spent a couple of days this week wearing a watch that barely gets any time on the wrist- The Oris Modern Classic; 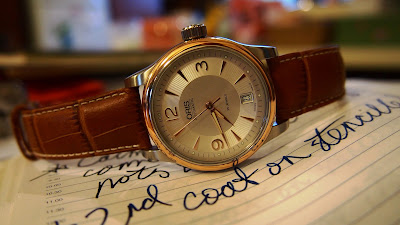 This two-tone piece measures 37mm in diameter. It's a smart, modern take on the kind of wristwatch that Switzerland used to churn out by the truckload back in the Golden Age of Watchmaking (circa 1952 to 1967, if you ask me). Reason I don't wear it often is because my daughter saw it once and commented on how nice it looked. I got it originally on a two-tone bracelet, but switched it over to a leather strap a year or so ago. This particular model is no longer in production, but Oris does currently make a very similar model in both 37mm and 40mm, available in all steel or two tone like this on above. What attracted me to this watch originally was the rose-gold and stainless steel mix. I do like rose gold. I find it a little more understated than yellow gold.
Next day, I swapped the strap over to something darker. Nicer contrast;

Meanwhile, I went in to work a couple of times this week. Still so much to learn, but I'm getting the hang of what I've been shown so far. I start officially next week.

My wife and I took a quick trip to a local OpShop this week. I visited this store about a week ago and saw that they had an Olympus Trip 35 on display. Price was $45. I took a look at it, fiddled with the lens a little and noticed that the aperture blades appeared to be a little stuck. Hmmm. The saleslady asked me if I was interested in it, but I explained my concerns, saying that this would need the lens removed and the blades would need to be doused in lighter fluid or graphite powder in order to loosen them up a little. I passed on it.

Anyway, when I went back this week with my wife, the camera was still there, but the price had been dropped to $29. Okay, that's better. At that price, I could run some film through it to see if it worked. If it did, great. If it didn't, then I'd have a spare parts camera to use for my other TWO Trip 35s. These are a great camera. Oh, I was wearing the Omega Seamaster 300 on mesh; 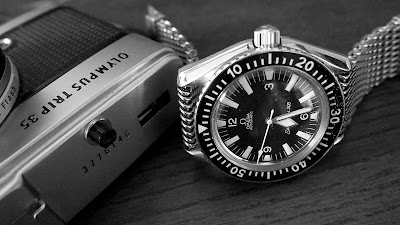 Yessir, it'll be good when these tales of foreign intrigue are all arranged in their proper order. 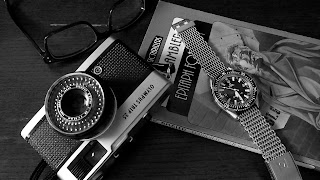 And how did that stenciled panel turn out? Here's the finished product, with two coats of varnish; I'm happy with how this turned out. Not perfect. Looks like it was stenciled on by a lowly-paid dock worker in Kingston, Jamaica. Circa 1960. He does this a hundred times a day, and he's a little slap-dash about it.
Which is perfect.