"Oh interviews! And yes, they do move damn fast. I have to say of all the jobs I have had in the last 10 years, I am never not surprised about the direction and outcome of things when I have one. Good luck."
- Scott Kernaghan, February 5th

"I'll add my voice to the chorus of well wishes for the interviews. You still at the optician's while searching? I meant to ask if you were still pursuing library gigs."
-B McMolo, February 5th

These two comments were made in response to last week's post of mine. Things got busy and I never replied to them, but it perhaps seems more fitting to respond with this week's post. 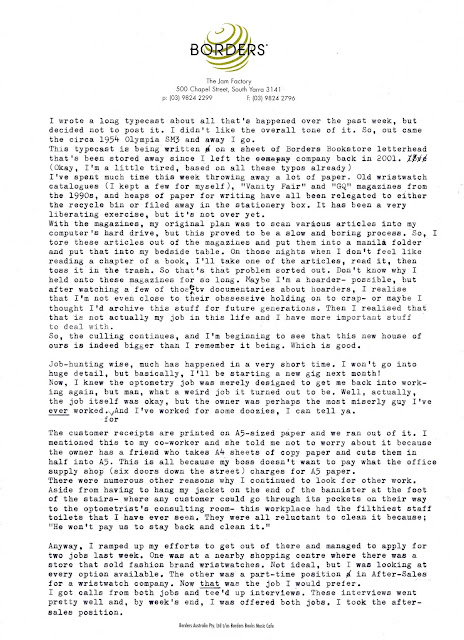 So, I'm back working in the wristwatch industry! Which suits me very nicely indeed. I don't want to divulge which brand I'm working for. During my interview, I provided them details of this blog in order to showcase my wristwatch reviews. Now, I don't know if they ever read them or not, but I'll assume that they may have. Therefore, I don't want to write anything here that may go against company policy or could be viewed as casting the brand in a negative light.
I think it's better that way.

With regard to the actual job itself, I've done after-sales before, back when I sold watches and dealt with repairs for about a year. I can do this job. I can explain repair quotes in layman's terms. Rude or angry customers? No problem! I've diffused a fair few of them over the years.
Best of all, it'll be great to work behind the scenes in this industry. Hopefully, I'll be able to hang up my retail shoes once and for all.
I wore the Sinn 103 St Sa to the interview; 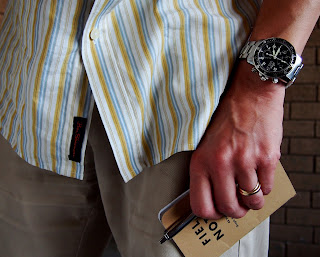 Don't worry. I was dressed better than that for the interview. 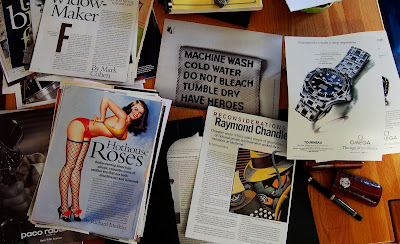 Various pages from various magazines that I've held onto since around 1990. Most of them were from US GQ Magazine. At one point, I began scanning them into my computer before coming to the decision that this was a time-consuming process and would likely end with me never looking at or reading these articles ever again.

So, I've put them all into a plastic folder and put it on a shelf of my bedside table. On nights when I don't feel like reading another chapter of a book, I've grabbed the odd article here and there, read it and then tossed it into the bin. Bit by bit, I'll get through them all. If there are any that I think I should keep, then they'll go back into the folder and get filed away. The wristwatch ads will be laminated so that I can frame them and put them up on a wall of the small fourth bedroom, which my wife and I have dubbed 'the craft room' since this is where my typewriters and movie posters are stored, and it makes an ideal room for sitting down at the small desk and working on a typewriter, wristwatch or other item where it can be left alone for days on end without getting in anybody's way. 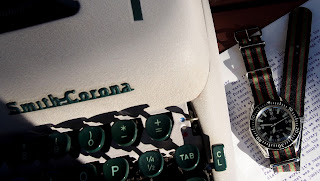 I switched over to the Omega Seamaster 300 when I sat down to typecast the first draft  on the circa 1956 Smith-Corona Silent Super. Great typer, that one, but I think I'll have to replace the feet with some rubber with better grip. I've been putting off going to the hardware store to get timber for the final bookshelf. Silly, really, since we still have books in a million different places in this house and it would be nice to have them all out of the way and in one spot.

Thursday
So, I dropped the kids off at school, went and did a quick workout at the gym and then swung around and stopped off at the hardware store. Three planks of treated pine, 235mm wide, 19mm thick, and 2400mm long. This'll be enough to get it started. When my son gets home from school, I'll see if I can wrangle him into holding the timber steady while I rout some dado grooves into it.
I briefly wore the Rolex Submariner when I wrote page 2 of typecast draft number one. I used the circa 1966 Olympia SM9. Now that is one machine that's going nowhere.
Mixed up a quick Gin Rickey; 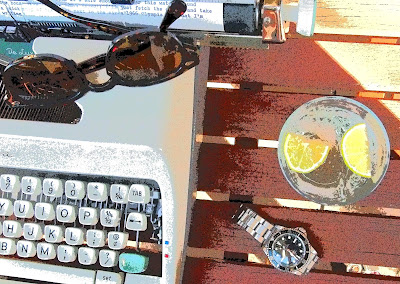 Today
I received my Employment Contract via e-mail yesterday. I read through it a couple of times. All good. Straight-forward, and with no surprises.  When I woke up this morning, I had breakfast and then signed the paperwork. Got changed, switched wristwatch and headed out the door. Back on went the SM300, on a black NATO strap; 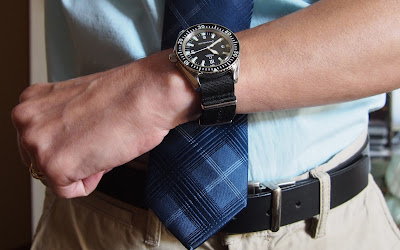 Got home a few hours later and hammered out the typecast above.

It's been a busy week, gang. I stopped to think about how I got out of retail a few years ago and returned to study, in an effort to change career. I thought about the library course that I undertook, and how I made the decision last year to not pursue work in the library industry. It seemed that what libraries were when I began my studies and what they are now becoming are two different things. Less customer service, more I.T. based.
However, I'm glad that I did the studies. I'm glad I handed in all the assignments and reports and I'm glad that I passed the entire unit of study, with a few High Distinctions in a few subjects too. I have the qualification, even if I never make use of it.

I'd like to thank all of you who have wished me luck over the last few months (years!). It's been a trip, to say the least.
Hopefully, life will get a little calmer and predictable around here for a while. That'd be nice.

And one more pic of the Submariner with the drink and typewriter. In the Diorama Filter setting;