I missed this. Fool that I am, I missed this. I was busy last week with assignments and what-not. Ursual Andress celebrated her 78th birthday on March 19th, and I mentioned it in my wristwatch post a couple of days ago, but how I managed to miss Timothy Dalton's birthday two days later, I'll never know.
"And you call yourself a Bond fan, teeritz? Shame on you." 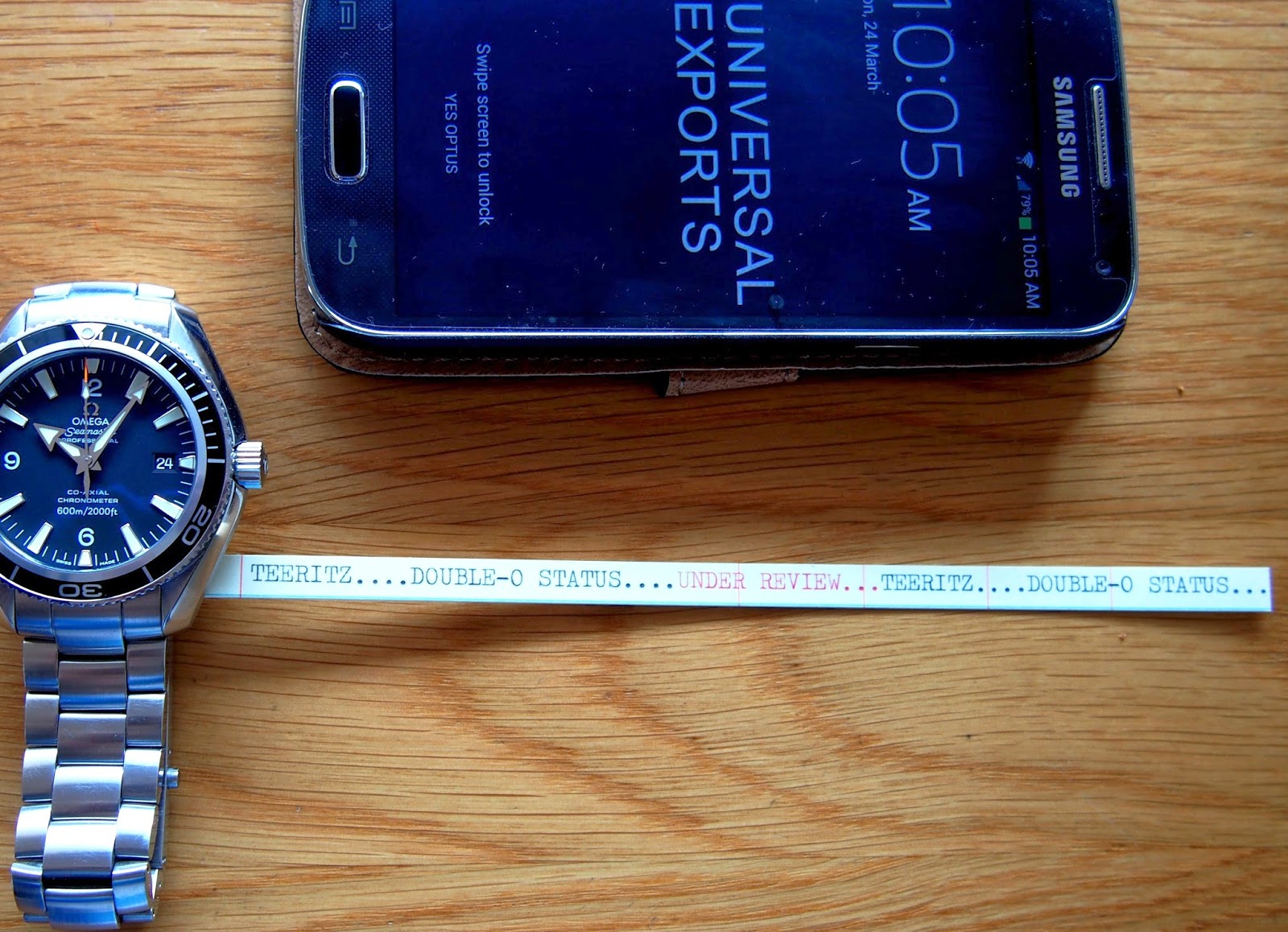 It was welcome news when I first heard that Roger Moore had finished up his tenure as James Bond. His last gig as OO7 was "A View To A Kill" in 1985 and he was indeed well past his prime in the role. Moore was 47 years old when he was first cast in the role back in 1973 for "Live And Let Die" and he looked great for his age.
As a kid, I thought Moore was great as Bond and "Live And Let Die" was my entree into OO7's world of far-flung and exotic locations, mad villains, sexual innuendos, fast cars and licences to kill. It also sparked an interest in wristwatches and specifically a Rolex Submariner, but that's another story that has been covered here already and wil probably be covered again when I get my mitts on a vintage model one day.
I took the Bond films seriously, despite Moore's light-hearted take on the character. I hadn't yet discovered the Fleming books or the earlier Connery films. This was the mid-Seventies and I was still a kid.

Then, around 1979, I read the movie tie-in copy of "Live And Let Die" and was staggered at how different the Ian Fleming's book was to the film. By then, there was also a resurgence in popularity of the Bond movies and it was an event whenever Channel O screened a Bond film on Sunday nights at eight-thirty as their Movie-Of-The -Week.
It was on one of these Sunday nights that I first saw "Dr No", Sean Connery's first foray as Bond. Coupled to my reading of more of Fleming's Bond books, and I began to feel cheated by Moore's portrayal of James Bond. Sure, I realise now that it had more to do with the mores of the 1970s rather than Moore himself (man, did I use 'more' often enough in that sentence?), but his Bond films just got too hammy as the years rolled by. My wife summed it up best when we sat down to watch the entire back-catalogue with the kids; "The Roger Moore ones made Bond look more and more foolish, what with the gondola that converts into a car and the fake crocodile that he uses to infiltrate whatever it was in the one set in India ("Octopussy", 1983)."
And that was it. The Moore ones had strayed too far from the source material. Some moments verged on what you'd expect to see in a "Carry On" movie. I almost expected to see M played by Kenneth Williams and Sid James as Q!
And so, it was announced in 1986 that the hunt was on for a new Bond. Pierce Brosnan was approached, but his "Remington Steele" TV series contract was iron-clad and he couldn't get out of it. I had heard talk of Mel Gibson being approached, which might have been interesting. Other names were bandied about, I can't remember them. Even Sam Neill screen-tested for the role.

In the end, the part was given to a fellow named Timothy Dalton, a Royal Academy of Dramatic Art graduate who later went on to tour with the Royal Shakespeare Company.
Dalton had previously been offered the part back in 1969, after all attempts to lure Connery back to the role had failed. Dalton was then 25 years old and he declined the offer, stating that he felt he was too young for the role, which ultimately went to Australian George Lazenby for "On Her Majesty's Secret Service".
Fast-forward to the mid-Eighties and Dalton felt he was ready to strap on the Walther PPK.
And there was much rejoicing in the land of teeritz. Especially when I saw photos of the man. His looks fit the template of Fleming's description of Bond. Black hair, cold, blue eyes, cruel mouth. The only thing missing was the three-inch scar on Bond's right cheek. But I suppose no actor, even a Method one, would want to go that far for a role.
Yes, Timothy Dalton looked the way Bond ought to look. And he was a better actor than Moore. A few months later, I headed over to the offices of United International Pictures to snag one of these;

The teaser-poster for the upcoming Bond film, "The Living Daylights", partly based on a Fleming short story, outlined below.

SPOILER ALERT***SPOILER ALERT***SPOILER ALERT***SPOILER ALERT***SPOILE
"The Living Daylights" is a short story concerning Bond as he stakes out the entrance to a theatre in East Berlin from the upper floor window of a building across the street. There's a fellow British agent in the audience of a concert recital who needs help escaping over to the Western side. Word has gotten out that the Russians have assigned their best sniper, code-named 'Trigger' to take the agent out when he makes his run. Bond spends three nights peering through a sniper scope and he sees the orchestra musicians arrived at the theatre each night and notices a pretty blonde cellist as she arrives for each night's performance. To while away the hours, Bond daydreams about her.
On the third night, the fellow agent is due to make his run for it. As he does so, Bond sees an upstairs window of the theatre building open up as a figure takes up position with a Kalashnikov sub-machine gun. The Russians aren't planning on a single bullet. They're going for 'a saturation job' to ensure that the agent is killed. Bond looks through his sniper scope and sees the assassin with the Kalashnikov. It's the blonde cellist. Bond's orders are to kill the sniper once spotted, but he instead shoots at the stock of her gun, making her miss the opportunity to fire. The British agent gets across safely. Bond is reprimanded by the Station Head of East Berlin, who tells him that he'll report Bond's change of tactic in his report to M. Bond replies that he doesn't care, stating that what he did probably "scared the living daylights out of her. Probably shot her nerve for this sort of work", and he adds that he doesn't care if M fires him over it.

The events of Fleming's story take up about ten minutes of the film AFTER the memorable introduction of Dalton as Bond in the pre-credits sequence;


Bond and a few other Double-O agents are on a training mission, scaling the Rock of Gibraltar, when one of them has his line cut and falls past Bond to his death. The camera pans up as Dalton turns to see his fellow agent fall and we get our first glimpse of a new, harder-edged Bond before we are treated to a nifty fight scene on top of a runaway Land Rover loaded with dynamite. It's a great scene, made better by Dalton doing some of his own stunts in the film.

Dalton does a great job in the role. He only did two Bond films, and his second one, "Licence To Kill" (1989), wasn't as big a hit at the box-office as was hoped. The Bond films had been getting some serious competition from the Die Hard and Lethal Weapon franchises, as well as Arnold Schwarzenegger's, Sylvester Stallone's, Chuck Norris' and Steven Seagal's output of films, and they were perhaps beginning to look a little tired.
My real problem with the two Dalton Bond films had more to do with the scripts than anything else. There was still some residue in the screenplays that belonged in a Roger Moore Bond movie. Dalton had done his homework. He read all of the Fleming books prior to commencing rehearsals and he stated in interviews that he wanted to bring Bond back down to Earth a little and make him more three-dimensional as a character and have some of the darkness of Fleming's novels. I don't think that audiences were quite ready for that. Personally, I put him in the Top Three, after Connery and before Daniel Craig. Don't get me wrong. I love Daniel Craig as Bond. However, I just find Dalton a closer physical match to Fleming's description, and his portrayal is closer to Daniel Craig's than it is to Pierce Brosnan's.

And then there's his voice. Welsh-born, Timothy Dalton's Shakespearean drama training gives his Bond a rich timbre to his vocal delivery. Reminds me a little of Patrick Stewart. And Dalton's face has a lot more going on besides a raised eyebrow here and there. Yes, he was superb in the role, as far as I'm concerned. 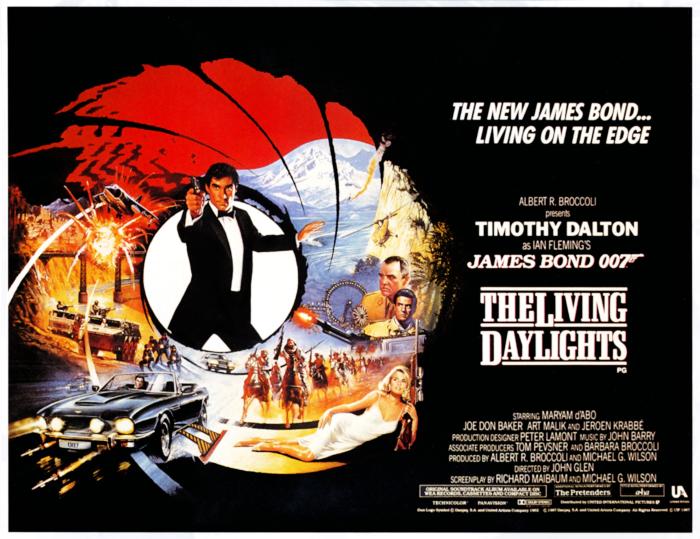 I think that the above-shown poster was maybe the last time we had a Bond poster done with artwork rather than photos. I managed to get hold of a copy of "Interview" magazine from the '80s which had the photographic version of the poster in it. I've had it laminated and I'll put it up on the wall one day. 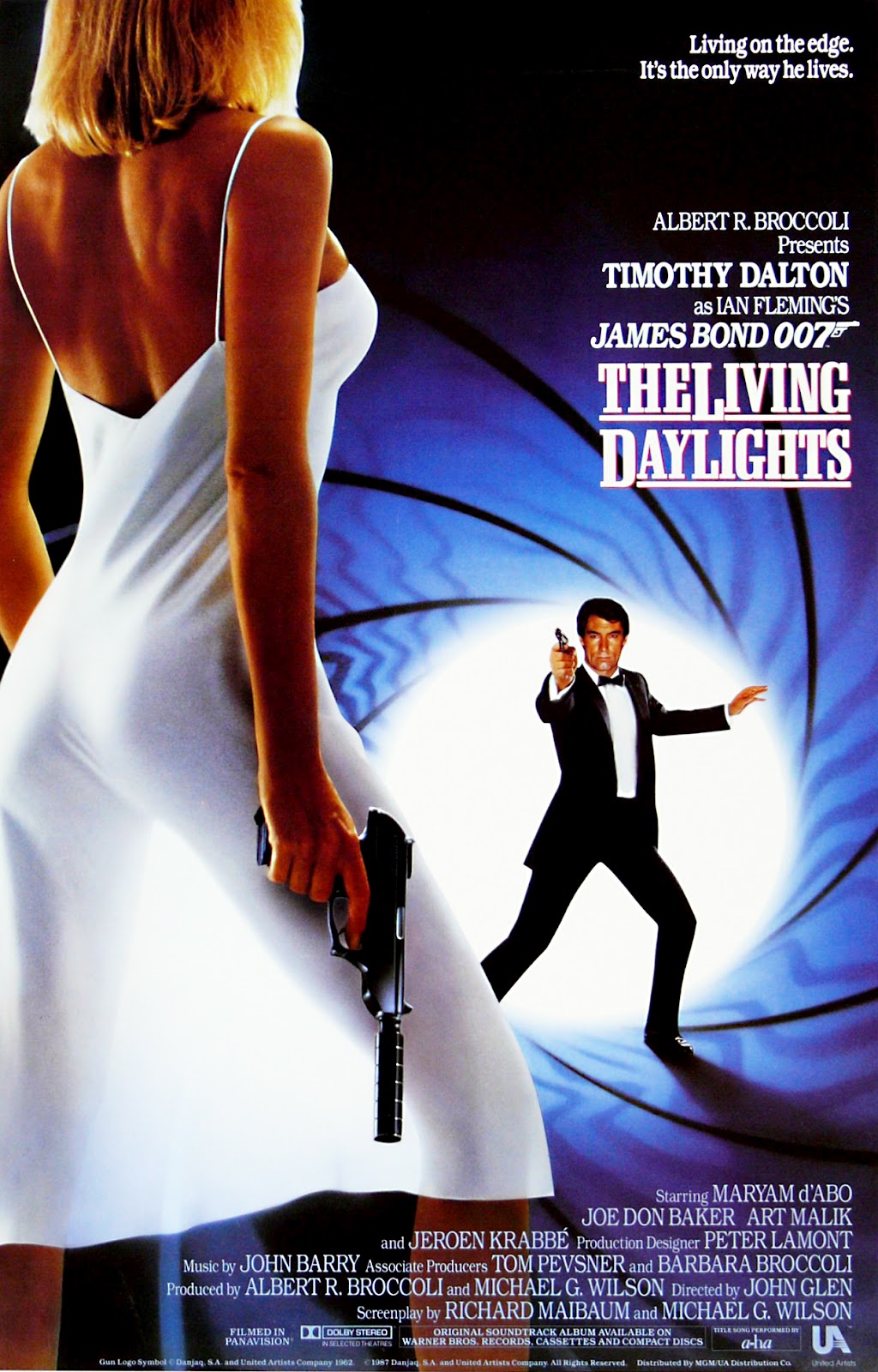 And so, Dalton wound up doing two Bond films before the legal wranglings of EON Productions/United Artists forced a six-year hiatus between OO7's adventures on-screen. By the time the dust had settled, it was 1994 and Dalton had decided too much time had passed and he was ready to do new things. And so the hunt was on for a new actor to play Bond and Brosnan got his shot.

Anyway, a (belated) Happy 70th Birthday to you, Mr Dalton! Without your efforts, Bond may have died a quiet death after Moore's tenure. So I thank you for keeping the PPK locked and loaded.

Thanks for reading!
Posted by teeritz at 18:31