Last weekend
Saturday Night's "Lolly Nite" Movie was "Rush" (Ron Howard, 2013), the story about the rivalry between 1970s Formula 1 drivers Niki Lauda, from Austria, and the Englishman, James Hunt. I have to say that it was a great film. Almost Arthurian in the way that the story unfolds. I used to lightly follow Formula 1 racing back in my younger, finish-work-at-one-am,stay-up-till-four-am-watching-a-live-telecast days (or rather, nights) when I worked in hospitality and would come home from work too wired to go straight to bed, no matter how much my legs ached. Both Lauda and Hunt had retired from racing by then, but I knew enough about their place in Formula 1 history to enjoy this film.

Niki Lauda is portrayed as methodical, precise and disciplined while James Hunt is shown to be the playboy party animal that he was, bless him. Hunt went on to become a race commentator and it was great to stay up till the wee small hours watching lap after lap of some race and listen to the commentary supplied by the hyper-sounding Jackie Stewart (himself a former driver) and James Hunt's more laid-back approach. The beauty of listening to these two men talk of Formula 1stems from the fact that they both raced in these championships, but in different eras, so it was always interesting to hear them talk of the changes to the sport over the years.
To say any more about the film's plot would give away too much, so I'll leave it there.
Although, I will say that Chris Hemsworth turns in a charming performance and it's good to see him in a more actorly role rather than just wielding Thor's hammer. Hollywood's typecasting mentality is as strong as it ever was, so it's important for actors known for action roles to stretch their talent in more character-driven films. Daniel Bruhl, who plays Lauda, does a superb job in the role of an on-the-surface unlikeable and humourless person and he stays perfectly in-character throughout the film. Ron Howard's directing shows that he's come a long, long way from Opie Taylor and Ritchie Cunningham, turning in another solid, well-made film.

I checked my e-mails on Sunday evening to find a link to my results for all those Social Media assignments I've done lately. Basically, I've passed the subject, achieving two Distinctions (90%-100%), two PCs (or Credits, which equate to 80%-89%) and two Competents, which merely mean that you either know the assignments or you don't.
So I'm happy with all of that. Especially since I thought that I hadn't done enough for one of them. So, one subject done and out of the way, two more to go.
I was still wearing the Omega Planet Ocean, but I'd switched last week's NATO strap for its original bracelet. Here's an old photo;

Monday
You may recall that I attended the funeral of my brother's father-in-law last month. Well, my brother sent me a text to say that his mother-in-law passed away on Friday. I have sometimes read that this is a common occurrence where one spouse in a long-term marriage dies and the other follows soon after. Not sure what my stance is on Heaven these days, but if it exists, then at least they are together again.

Wednesday
Had classes. No major highs or lows. One guy was asleep with his head down on the desk for the first hour. I still had on the Omega Planet Ocean; 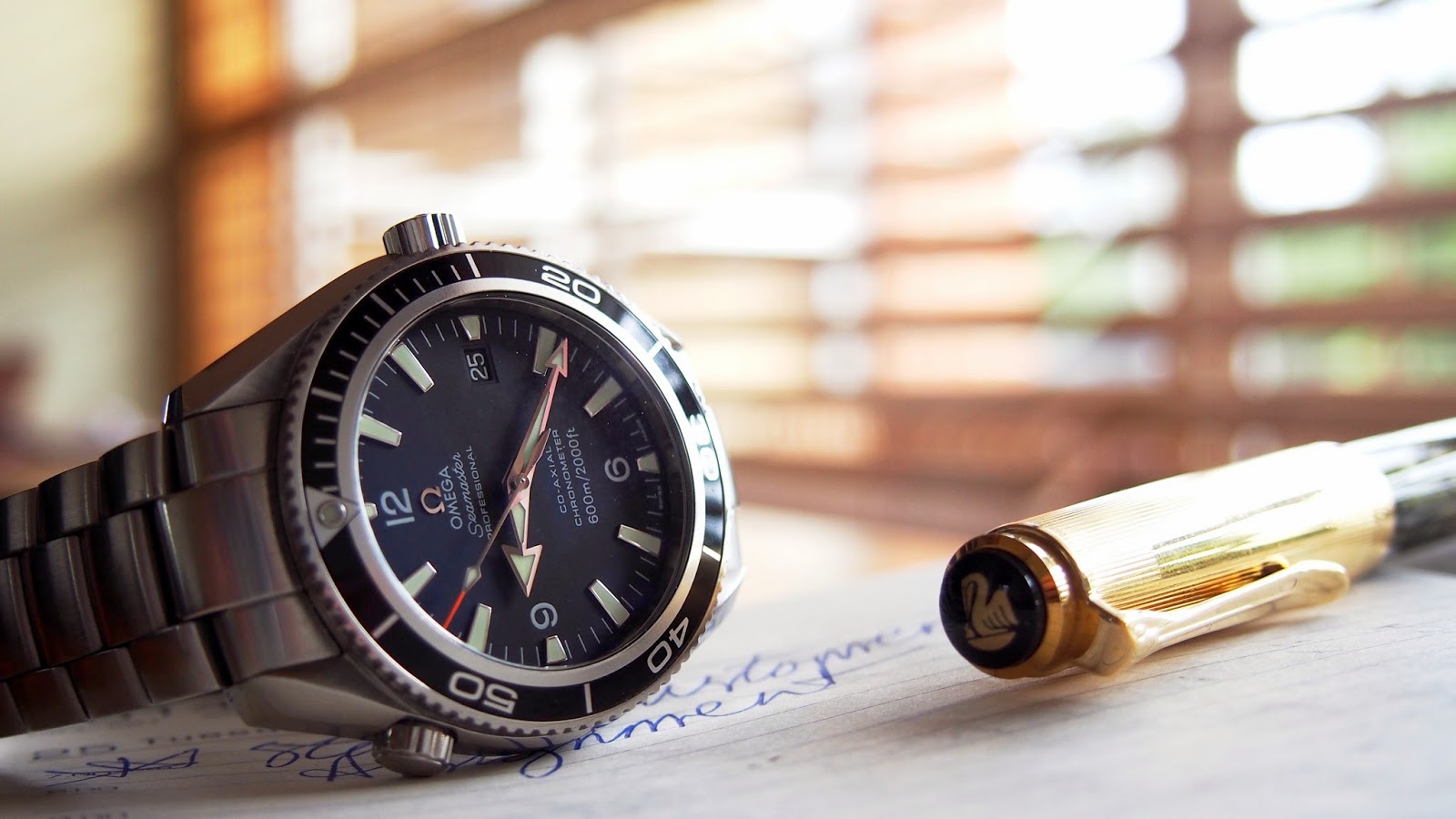 And, late March is also when the BaselWorld Watch Fair begins, so there's been much conjecture as to what the major Swiss brands would be releasing this year. Omega began a teaser campaign on Twitter a couple of weeks ago in a bid to whip watch nerds into a frenzy. Finally, all was revealed late Wednesday night (Australian Time);

This is just one of Omega's new releases. A modern re-edition of their classic Seamaster 300 (model CK2913) from 1957, which looks like this;

Personally, I quite like this new version, even though there are a couple of deal-breakers for me in its design. I wish there was a little bit of SuperLuminova on the hour hand stem and I'm not too fond of the polished links in the middle of the bracelet. Aside from that, it's a nice watch. However, since I already own these two... 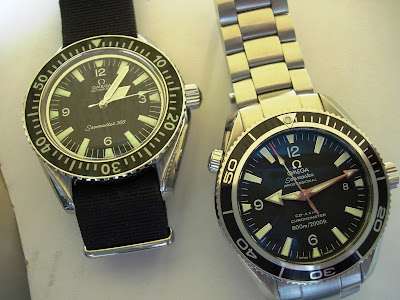 ...I don't see myself developing a real urge to consider this new model. Still, I think it's a nice, faithful reproduction of one of Omega's classic watches.
One brand that did catch my eye this year was Tudor. Yes, yes, some purists consider Tudor to be some kind of idiot cousin to Rolex, but I have to say that Tudor knows how to make a nice watch. This new blue version of their very successful Black Bay dive watch is but one example of the kind of product that Tudor does very well. Here's the new Midnight Blue version next to the Red model that was released about two or three years ago;

Not bad at all. Again, this watch is a modern interpretation of a classic Tudor model from the Sixties. You may have seen that this has been a common trend over the last four years or so, where many brands have been mining their archives for designs from their past. Some brands have produced some beautiful re-editions.

Later on Wednesday night, a toe on my left foot was itching. Back in December last year, I thought I'd gotten a spider bite or some kind of sting on this toe because it had a small blackened area on it and the skin was a little flaky. I applied some cream, later thinking that it might in fact have been Athlete's Foot, and it cleared up after a few weeks.
Well, Wednesday night found me reapplying the cream again because it was itchy as all hell, with a slight burning sensation as well. Not much more I could do about it after that, so I went to bed.

Thursday
Off to the funeral service for my Brother's Mum-In-Law. I figured I'd switch watch. On came the Tudor Oyster hand-wound. And, like the funeral a month ago, I was dressed accordingly, whereas 95% of the other fellows there seemed dressed for a day at the park. There's just no effort made anymore. Ahh, well, I don't mind being the keeper of the flame. That tie is black, but came out looking blue in the photo. 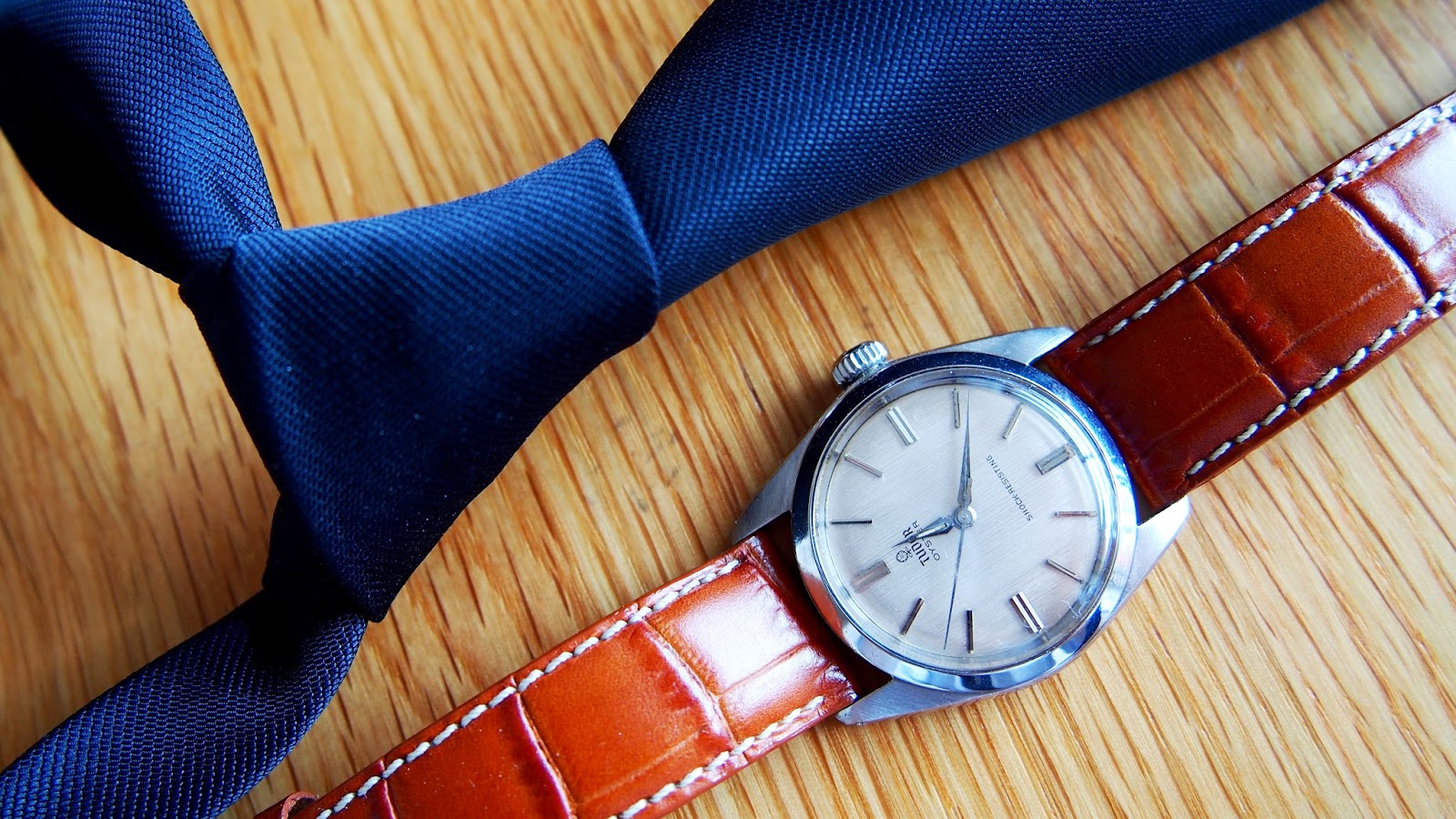 Later that afternoon, I felt a little pain around my groin area. Yeah, yeah, too much information, but this is MY blog. Upon inspection, I found a small area on my upper thigh that had swollen up to about the size of an egg yolk.
"Oh, no way, man, not a hernia!", was my first thought. I put some ice on it to reduce the swelling and made a note to make a doctor's appointment first thing Friday morning. Meanwhile, my left foot had swollen up to begin resembling a pig's trotter. Charming! And the itching and burning sensations were amplified.

To take my mind off it, I decided to fix the front side doors of my car. I picked the kids up from school in the afternoon and heard a sharp 'snap' as I rolled my window down. When I tried to roll it back up, nothing happened. It was jammed. Over on the front passenger-side, my son has this habit of pulling up on the door handle before I have a chance to pull up on the lock inside the car. Not only that, but there have been a few instances where he has rolled the window down half-way and the door itself has popped open while I'm driving. Something tells me that's dangerous.
For those of you who may not understand what the hell I'm talking about, it's an early '90s Toyota Corolla WITHOUT central locking and power windows. While I can see the logic of central locking (barely), I've just never understood power windows. Are we all really that lazy?

Anyway, I undid a bunch of screws and removed the panels from the inside of the doors. Of course, I needed to switch watches first, so off came the Planet Ocean and on went the Seiko SKX031 on NATO strap. I didn't bother adjusting the date on it; 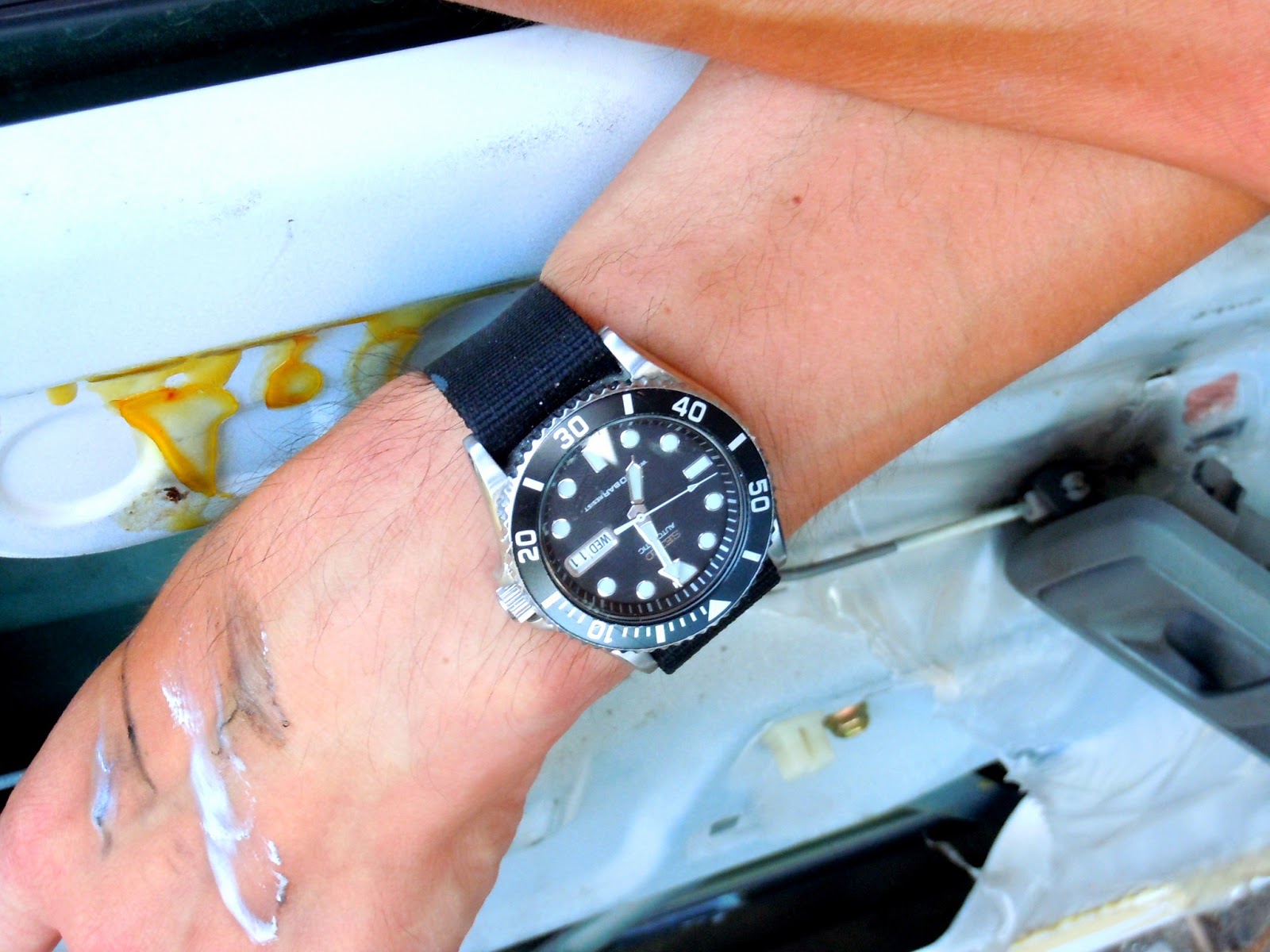 Yes, it became a messier job than I had planned, but I figured I'd add some grease and a dab of oil to some moving parts. Sure enough, there were a few bolts that had loosened over time, causing the entire window clamp and bracket to shift out of alignment. Nothing that a socket set couldn't take care of. Done. All doors and windows operate smoothly now.

Today
Got up this morning and every step hurt. Foot was still swollen up and felt quite warm to the touch. And I still had to drive stick-shift to get to the doctor's surgery. The appointment was for 11:40am. As I made my way there, my foot felt like it would explode every time I hit the clutch pedal. Doc checked out my foot and my upper thigh. The thigh swelling had gone down, but was still visible.
"I'd reckon it's some kind of infection that's travelled up and that's what's causing the swelling. If it was a hernia, it would be higher up, closer to the waist", was his diagnosis.
Oh, thank God!
Given where I am at this point in life, the last thing I need is to be laid up recuperating from any medical procedures. And, at some point, I'm gonna have to get the bunions on both feet taken care of, so I already have six weeks on crutches to look forward to.
That's what comes from 35 years of standing up on the job.
The doctor prescribed some antibiotics, which I'm not a huge fan of, since they tend to kill good bacteria as well as bad, but that's a small price to pay to get rid of this foot pain. 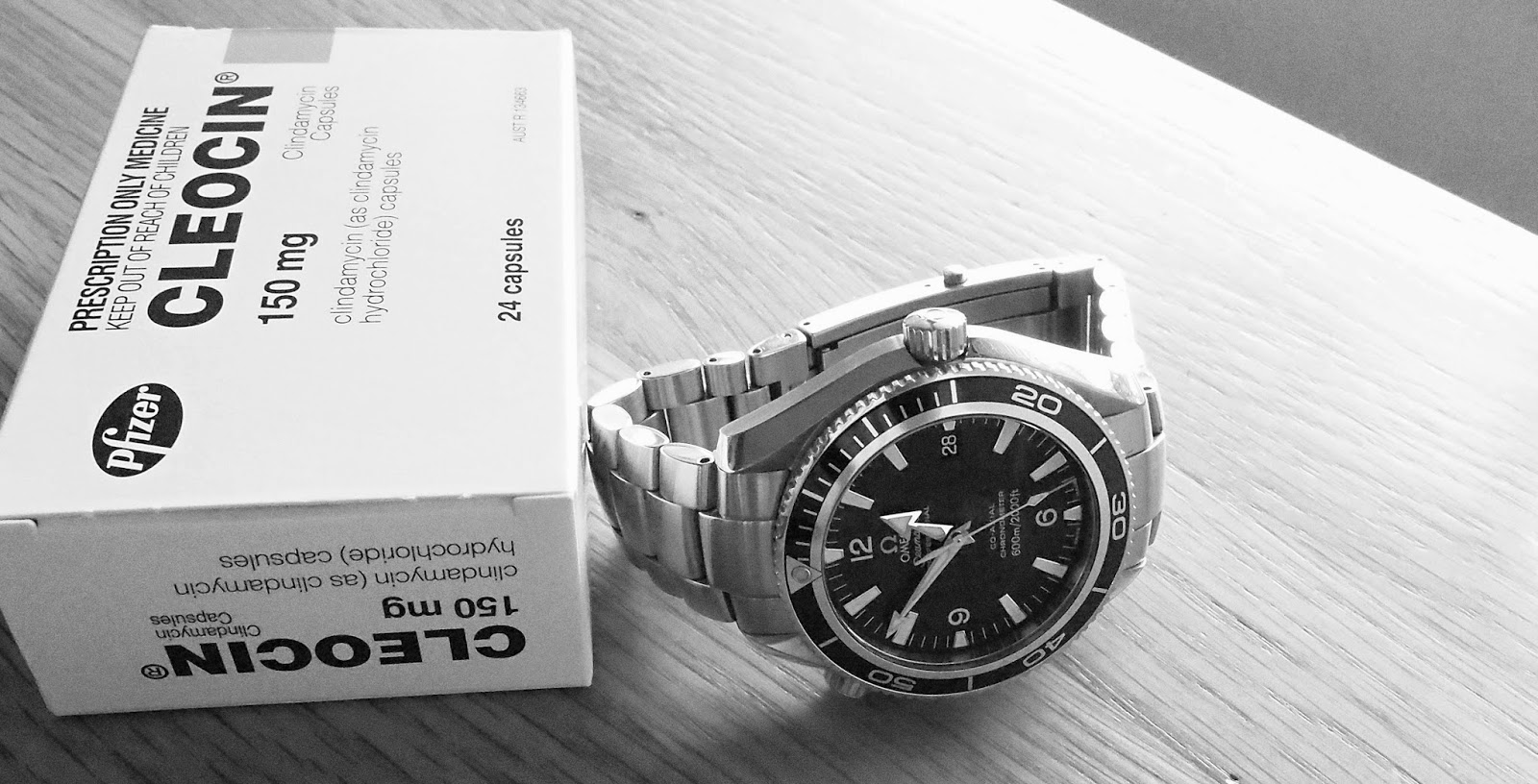 And so, that was a one hundred-dollar morning. Still, things could always be worse. My son and I have been slowly working our way through Season 1 of "24" and we have two episodes left. Bit of luck, we'll watch them tonight, after we've all had home-made pizza for dinner.
So, life is good.

Thanks for reading and have a great weekend, all!
Posted by teeritz at 22:52