It's now Friday, October 25th, 4:53pm here in Melbourne. I've decided to add more to the titles of these posts to differentiate them a little more from each other, and to give a hint as to what they'll contain. These weekly watch posts seem to still be evolving, I suppose.

Last Sunday
The Teeritz clan headed out to the Melbourne Showgrounds on a wholesome family outing. We saw a Batgirl, a Stormtrooper and a few zombies, among other things.
We were at the Armageddon Expo 2013.
I switched back to my Sinn 103 St Sa chrono; 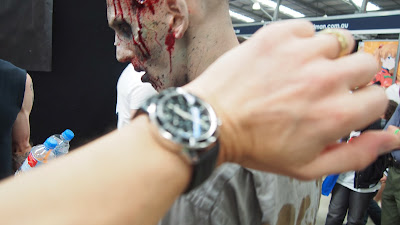 Apologies for the blurry pic. Autofocus chose the zombie instead of the watch. And don't believe what you see on "The Walking Dead". This guy moved pretty quick...for a dead man.
Here's a clearer pic that I took once we got home; 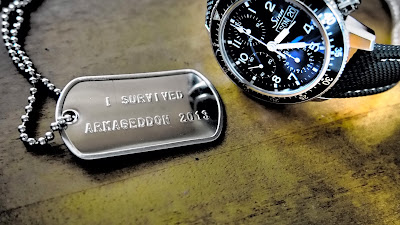 My son bought himself a few Batman comics and a wooden katana/ Samurai sword, my daughter bought a little music box featuring the cat from Studio Ghibli's anime, "Kiki's Delivery Service". I picked up a couple of items. When we got home, I switched over to the Omega Seamaster 300 on the TrueBond NATO strap; 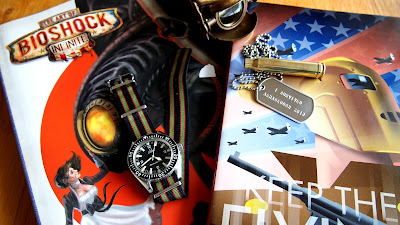 I love the steampunk world that was created for the console game "Bioshock Infinite". Incredible amount of detail that's gone into it. My daughter bought me that shell casing next to the dogtag. Cost her a whole buck.
Always been a fan of "The Rocketeer" comics from the Eighties and Nineties. They were about a fellow named Cliff Secord, who finds an experimental jet-pack in the late 1930s and gets into all sorts of mayhem with it, often dragging his girlfriend, Betty, into these shenanigans. 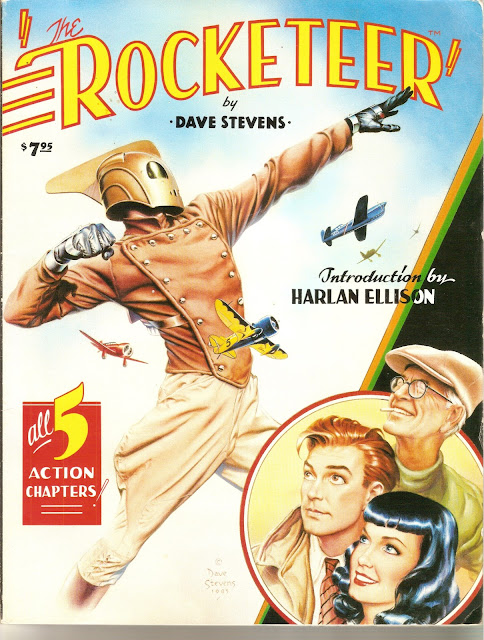 picture borrowed from http://comicconquest.blogspot.com.au/2013/03/rocketeer-dave-stevens.html
The artist, Dave Stevens, was painstaking with the amount of detail and shading that he'd put into his artwork. As a result, each issue's release was usually delayed. Sadly, Stevens died about five years ago at the age of 52 after a long battle with leukemia.
The 1950s pin-up queen, Bettie Page was the model for Stevens' renderings of Secord's girlfriend Betty, and Page herself had remarked that there had been a renewed interest in her after the Rocketeer comics were released.
The book I picked up was a commemorative volume of Rocketeer stories done by other comic artists. Very nicely done, too.
Monday
Okay, thrillseekers, what's wrong with this picture? 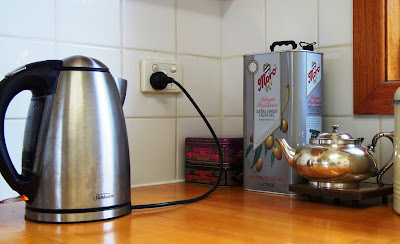 I'll tell ya what's wrong. There's no friggin' coffee machine in it! The Ascaso machine of ours was overdue for a service. It had water leaking from the steam nozzle, the rubber seals had perished, the temperature gauge wasn't working. So off it went for servicing.
"It should be ready in a week", the lady said.
"A week?! My wife and I will kill each other in a week!"
And so, out came the caffettiera. 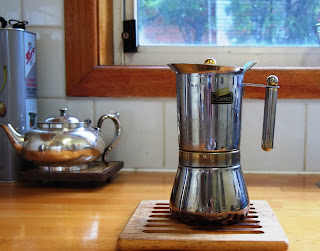 It produces an okay cup of coffee, no doubt, although it does taste 'thin' compared to what you get from an espresso machine. Still, we thought, it wouldn't kill us to detox a little. I got back from the coffee machine repairers and did a little more of my databases assignment. Still had the Omega on. 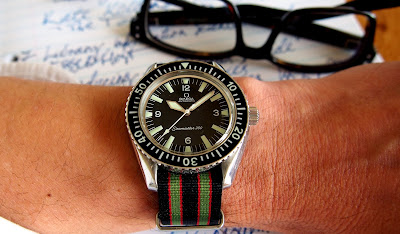 Wednesday
Worked on the last seven questions of my databases assignment. Answered six of those questions over three hours. Then spent over an hour finding the answer to question seven. But I finally got it finished and submitted. That's another module of this library course done and dusted. Felt good. Switched over to the Omega Railmaster to bring closure to it all. 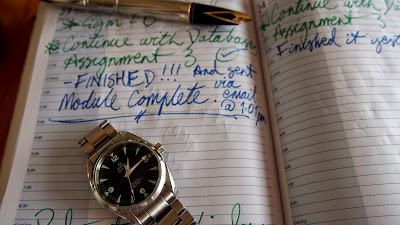 Later that evening, I took a few pics to mess around with my camera. I still haven't sat down to try to master the ISO settings and what-not. I think this picture turned out okay, but I'm certain that those of you who know your way around a camera could produce finer results. I positioned the watch on a book trolley next to a lamp in the lounge room. 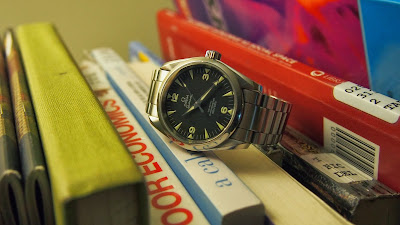 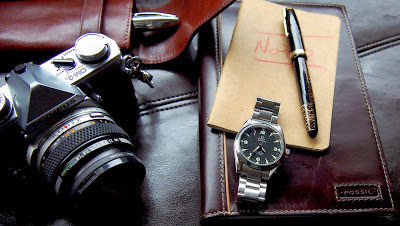 Friday
Got a message on the answering machine late yesterday afternoon saying the coffee machine was fixed and ready for collection. Dropped the kids off to school, came back home and had a cup of tea while I planned whatever else I had to do this morning.
Although I love my coffee, I do indeed like a cup of tea. Normally reserved for the evenings, but I just felt like something warm to drink and Earl Grey is my preferred leaf. 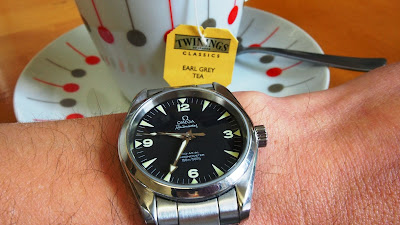 Got home, plugged the machine back in and flicked it on. 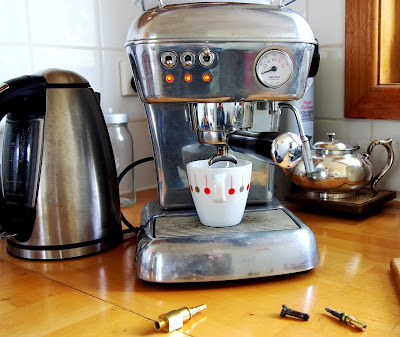 Back where it belongs. I positioned a cup under the gun to see if the machine would leak as it warmed up. It didn't, which was a good sign. Those brass bits in front of the machine are the parts that were replaced. This machine has definitely taken a beating since it was serviced in May last year.
The light in the middle means the machine is switched on, the one on the right means that the machine is hot enough and ready to go, and the light on the left means the steamer is on and ready. What the hell was I waiting for?
Four minutes later... 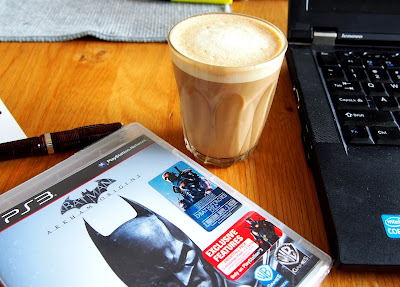 Long time no see, latte. And after the first sip, balance was restored in the Universe.
Our son has been doing well in his first year of secondary school, so we thought we'd get him a little treat. He'll soon be beating up The Joker's goons with reckless abandon.
And so, that's another exciting week wrapped up. ﻿
Thanks for reading!
﻿
Posted by teeritz at 22:53