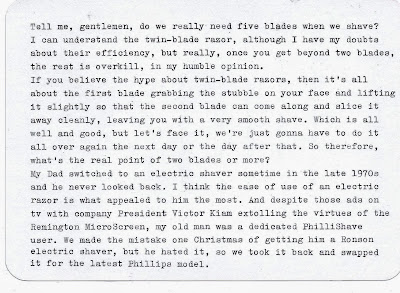 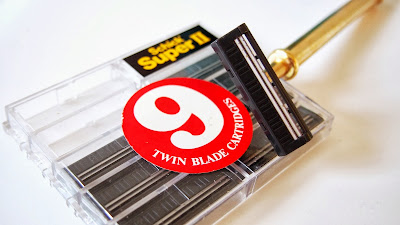 By the time Dad stopped using a blade razor and switched to his electric PhilliShave, he had about 20 packets of twin-blades stashed aside. I still have seventeen of these packs left. Should last me quite some time. ﻿ 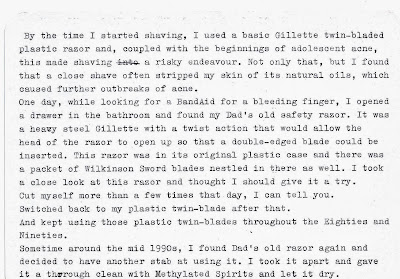 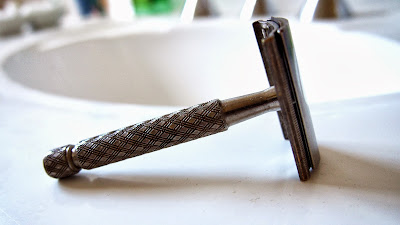 This was his basic Gillette razor that he must have bought sometime in the 1950s, I'm guessing. It's a simple razor which breaks down into three pieces.

That section next to the handle can be screwed back on upside down to protect the blade and prevent any nasty accidents when reaching for the razor at the bottom of a traveller's wet-pack. I found that out the hard way once. Never happened again.﻿ 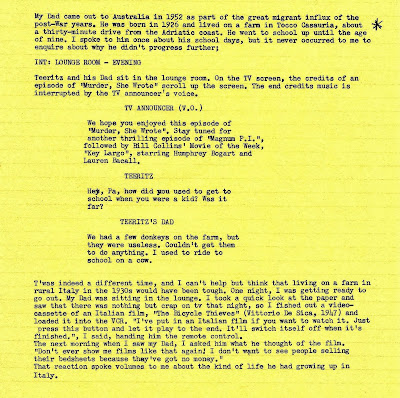 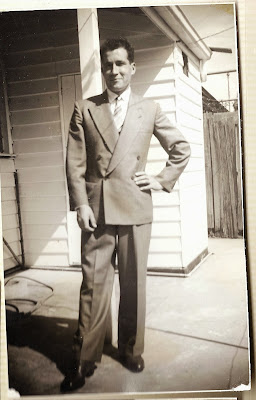 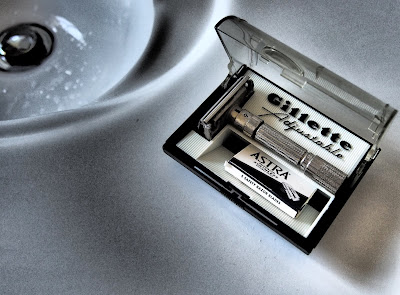 My Dad must've gone out and splurged some cash on this one. An adjustable Gillette model 195, commonly known these days as the "Fat Boy" due to its thicker handle. This razor, based on its letter coding underneath (yes, these things have serial numbers) dates back to the third quarter of 1961. The 195 model was manufactured between 1958 and 1961, so it would appear that he got one of the last ones made. Cool.﻿

A twist of the base of the handle and the razor opens up, like the electric roof of a Chevrolet Impala (were they electric?). There's a small adjustment ring on the handle which flexes the blade slightly, allowing for a greater gap between the blade and the razor itself. ﻿ 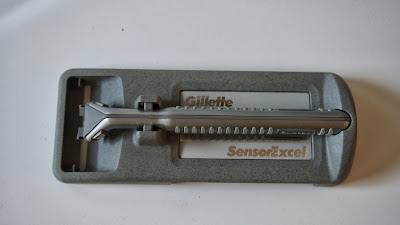 Somewhere along the way, I bought a basic Gillette Sensor Excel. It works well enough, and I use it when I'm in a hurry to shave, since modern razors tend to be a little more forgiving than the old safety razors.﻿ 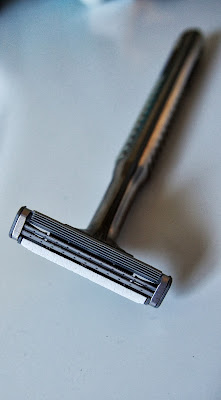 It works well enough. Two blades, plus that silly white strip of material that's meant to help the razor glide smoothly across the face and the rubber ridged section below that does what, I do not know. As far as modern blade razors go, this one is great. But it just doesn't have the solid weight and robustness of my Father's fifty-two year-old razor.
My Dad worked as a machinist in a knitting mill throughout the '60s and '70s. He did the night shift, from 11:30pm till eight am the following morning. As a child, I stayed up some nights way past my bedtime and I'd watch as he slowly wound his Wyler wristwatch while a cup of coffee sat on the kitchen table, a fine wisp of steam rising from the white china mug. He'd give my cheek a quick pinch before heading out the door to catch the 10:50pm bus to Sydney Road, Brunswick.
I can still remember the last time he pinched my cheek.
I was twenty-six.
Despite the fact that he worked nights, he was always waiting for me at the school gate each day at 3:10pm and we'd walk the ten minute distance home. It involved crossing some very busy main roads and I have vivid memories of seeing the aftermath of some awful car accidents along this short stretch of streets between my school and our house.
He would have a quick bite to eat once we got home and would then say 'goodnight' to us before going to bed at around 4:30pm. He'd wake up between 9:30 and 10:15 that night before the process of getting ready for work would begin again.
He never got a driver's licence. It was my Mother who had a car. And what a car! I say this with the benefit of hindsight. She drove a mid-late Sixties Valiant similar to this model.

picture taken from http://www.chryslerfanatic.com/featured/1965/1965-chrysler-valiant-1.shtml
If only she had kept this thing instead of replacing it with a Datsun 180B. Ahh well...
So, my Father never drove and yet, he was involved in a staggering nine car accidents during the years that he worked the night shift. I've never learned the details of them, but I do know that one or two of them involved the bus that he took each night, a couple of them occurred when he was a passenger in a co-worker's car, and there were at least two instances where he'd been hit by a car while crossing at a set of lights. Thankfully, none of them were serious, although one accident produced some nasty injuries to his legs, but he fully recovered.
And then, sometime in 1977, my parents decided to tear down their existing house and build a new one on the same block of land. It was then that my Dad took a second job. And so, his work day quickly evolved into working his night-shift job at the mill, coming home, briefly, and then going to work at a nearby electrical contracting firm as an electrical cleaner. He worked this job from 9:00am to 4:30 pm, five days a week. This obviously left him with even less time to get adequate sleep. He was now operating on about five to six hours sleep per day. ﻿

The new house was finished in 1978, and he continued working these two jobs. In 1981, he suffered a mild stroke, but it was enough to weaken his entire left side. Then came the onset of Parkinson's Disease a couple of years later and he never returned to work after that. The next few years were difficult, but my Mother was working full-time by this stage and we always seemed to manage. I was aware of our situation, but was very much oblivious to what was going on behind the scenes. Being the younger child, I always got the impression that my parents and brother shielded me from a lot of what was going on.

In 2001, at the recommendation of the respite hospital where he had been for almost a year, Dad was moved into a nursing home which was located five minute's walk from home. He required more specialised care than what could be provided at home. He was 74 and, although the nursing home considered him a little too young for admission, things happened pretty quickly after that.
I learned a long time ago that most life-changing events often do.

He came home a couple of days later and had his hair cut by John, a Greek barber who lived in the next street. We'd known him for years. He told us that he got into the trade in the late1950s and made a decent living out of it until "everybody wanted haircuts like The Beatles".
My Mother cooked Dad some lunch and, as he ate it, my wife remarked that this was a sad occasion. "Your Dad's here for the last time. In a few hours, he'll be sitting in a room in a nursing home. This is how he says goodbye to his house."
By this stage, we had a kid. Our boy was about 18 months old and he stood there watching John The Barber (as we called him) snipping away rhythmically with a thin pair of scissors. My Dad looked at his grand-son and said simply; "Beautiful little soldier."

We visited him often in the nursing home. My wife made the one-hour drive every Friday to take our son to see him. She didn't speak Italian and my Dad's English was fractured, at best, but she has often said that these weekly visits were the right thing to do, in order to maintain the connection between the generations, and to show my Father that his grand-son was both happy and healthy.

My Dad died four years later. He took a nap after lunch one day and never woke up. That's the million-dollar ending that we all hope for, I suppose. I was on the train heading home from work when my wife called me to break the news. It was 6:20pm and the train was barrelling along the tracks between Bentleigh and McKinnon stations. And I never felt so helpless in all my life. I think I stood up briefly before realising that there was nothing I could do.

My Father's wristwatch,  spectacles and razor. Whenever I do something decent, I know that he left me more than just these three things.

So, not to get too maudlin, and to bring this post full circle, I'm sure that every modern razor produces a smoother shave in half the time that it takes to use my Dad's razor. But then, I don't use it just to shave. I use it because it's still working perfectly after five decades.
I use it to remind me of all those little moments that we shared.
I use it because my Dad used it.


Correction;
* Tocco Da Casauria is the correct name of the town where my Dad was from. I'll have to visit there sometime soon and meet some relatives.