Last Friday
After I posted last week's wristwatch round-up, the postman arrived. I got this off eBay and have been patiently waiting for it. Finally! 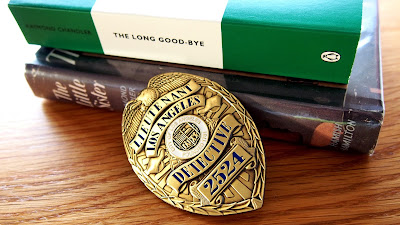 If you've read much of Raymond Chandler's works, then you may know that his protagonist Philip Marlowe used to work for the LAPD before being drummed out for 'insubordination'. I'm a great fan of the PS3 game "L.A. Noire" and classic Hollywood film noir as well.
I have a dream where there'll be a study in the next house with bookshelves along one wall and all of our books will be on display in order of genre or alphabetically according to author. Interspersed among the books will be little things like this detective's badge, nestled alongside the Chandlers.
One day.

Saturday, Sunday
I had an idea for a way to dampen the sound from the platen of my Smith-Corona Galaxie II. 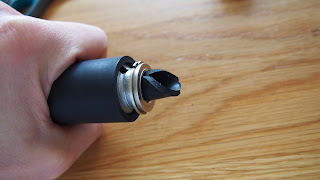 By the time I was done, my finger-tips were blackened. Did it work?
Well, that's another post, ain't it? Coming soon to a computer near you.

Had the Omega Railmaster on my wrist throughout the weekend. We had some sunny afternoons;

Sunday Afternoon
And dammit! The tyres on my car are definitely unroadworthy, and I've been meaning to get a new set. Of course, now that I see this, I'll have to move it to the top of my 'to do' list; 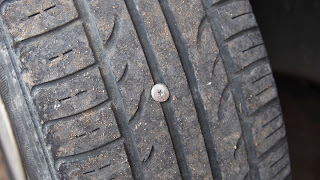 I once removed a nail from my car's tyre using the corkscrew of my Swiss Army knife. Worked like a charm. And then the tyre deflated. Now, if this screw can only stay put for another day or two.

Monday
Okay, the car's booked in for four new Yokohamas plus fitting and balance. Thankfully, it would cost me much less than I thought it would.
Been reading William Boyd's Bond novel "Solo" this past week. The story is set in 1969 so onto my wrist went the 1969 Omega Seamaster Chronometer. 'Cos sometimes, you just gotta go old-school. 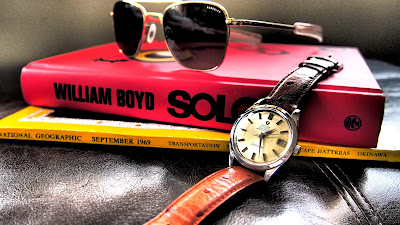 Tuesday﻿
Had a test. I had to complete a MARC Catalogue record for 1 fiction title, 1 non-fiction title, and 1 non-book item. I thought I'd choose three items that were bare-bones and basic. Only one author, first editions with no previous printing histories. Nice and easy...until I tried to write the record for the "Sherlock Holmes" soundtrack. While this score was composed by the great Hans Zimmer, it was PRODUCED by Zimmer and Lorne Balfe, and this is what caused me a little angst. Still, I got it finished in time...before being told that we could take the test home and finish it!

Still had the vintage Omega strapped to my wrist. It's on a fake ostrich strap. I think I may swap it over to something a little darker. 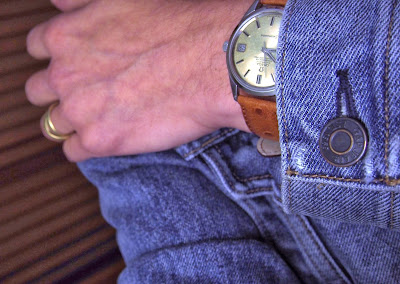 Tuesday afternoon
Just over three-quarters of the way through Solo and, while not action-packed, it's been enjoyable so far. Boyd has done a good job of writing something that has the feel of a Fleming Bond book. Switched over to the Omega AquaTerra Co-Axial;﻿ 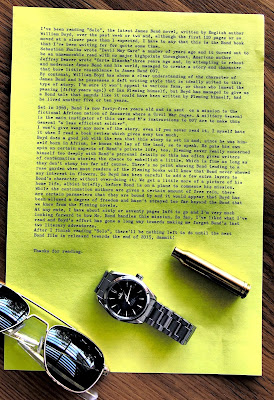 Wednesday
Got a call from a fellow offering me some work. Couple of days a week till Christmas. It'll do for now, but I'll keep hunting around for something with a little more permanence to it. Sent out four employment enquiries in the past couple of days. We'll see what happens. In the meantime, I'll keep looking.
Snagged a handful of old National Geographic magazines from the late Sixties/early Seventies. I get them for the advertisements. Took me a few minutes longer than I thought it would to remove this Omega ad intact. The rusty staples in the magazine are heavy duty indeed. 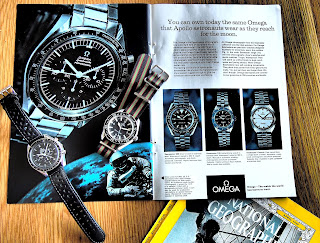 Wednesday afternoon
Picked up the car from the tyre guys. A new set of shiny, black Yokohama ADrive tyres and I can already feel the difference. Which is nice. 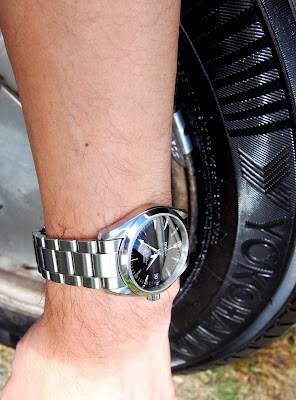 
Thursday
Went and bought some weedkiller. And then decided to mow the lawns. I'll never, ever buy another corner block. Too much grass. Off came the Omega and on went the Seiko 7002 diver. I'm sure that the Omega can easily handle the vibration from the mower, but why tempt fate?
As it turned out, I had the Omega on my wrist as I reached down to spray some weeds between the hot water unit and the wall. As I pulled my hand back, the bracelet of the watch caught on a copper pipe. No visible damage, but when I put the watch back on after mowing the lawn wearing the Seiko, I noticed that some extra force was required to snap the clasp shut on the Omega bracelet.
You would think I'd know better.
There was a huge discussion on the Omega forums about using expensive watches in hazardous conditions and I'm of the opinion that you should always have a 'beater' watch for those times when you know that you may risk damaging a pricier watch.  That's what the Seiko is for, after all. Even though I'll cringe and swear like a trouper if I ever damage it; 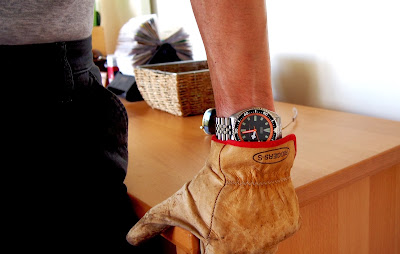 Finished reading Solo. It was okay. More of a character study in some ways, rather than an espionage thriller. The ending seemed a little hurried and unresolved, but William Boyd managed to stay true enough to the character. Definitely a better read than the last two literary Bond novels.
I'd rate it a seven-point-five or eight out of ten.

Friday
Another sunny morning. Sat outside and had a coffee. 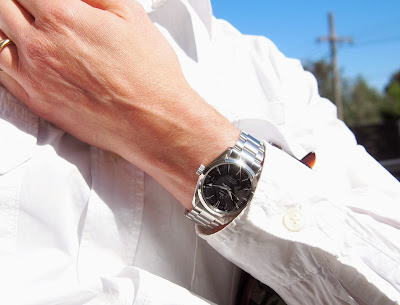 Later in the afternoon, I thought I'd tackle one of those annoying tasks that had been hanging over my head for ages. After my Mother died early last year, I removed all the contents from my old desk that was still in my old room. I put all this stuff in a plastic bag and put it in the boot (trunk) of my car. And promptly forgot about it until earlier this week.
And so, I decided to sort through it all and, man, what a lot of trinkety crap I had. Below is a sample of the better part of it. Even then, I'm not so sure why I've held on to this stuff. I must've found about six or seven Amnesty International badges. Stones tickets? Gotta frame those.
Vintage Apple Computer sticker? I don't know where that came from.
Those banknotes always make great bookmarks. The Clark Kent badge was from a school play that I went to...back in 1986!
And the Timex watch? Hell, that isn't even mine. It's my brother's. And it isn't working. ﻿ 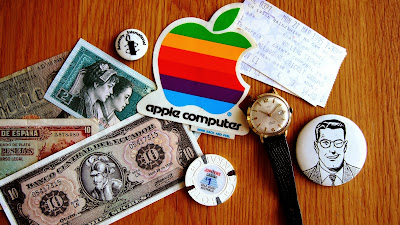 My wife says I'm a hoarder. I tell her "just gimme some space to pour all this stuff onto the floor and I'll sort it and get rid of 90% of it."
"Yeah, into another cupboard!", she just replied, after I read that last line out to her.

Nowadays, in the era of digital photography, I may just set these things out on some black fabric, take a couple of photos of it all (assuming I want to archive this crap), and then throw it away or take it to an Op Shop (Goodwill).

Anyway, thanks for reading and have a great weekend, all!
Posted by teeritz at 23:21