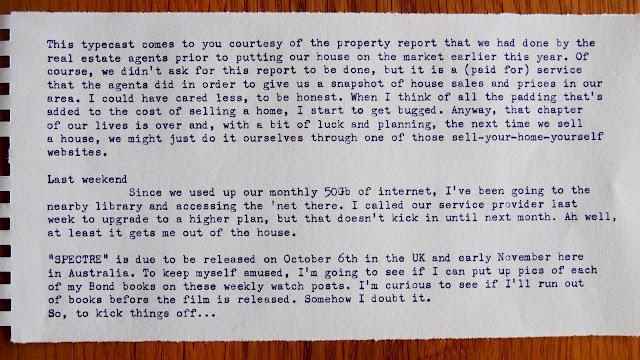 The 36.2mm Omega Seamaster AquaTerra Co-Axial with a 1970 edition of The Spy Who Loved Me (1962). It would appear that I only have one copy of this particular title. May have to rectify that one day. 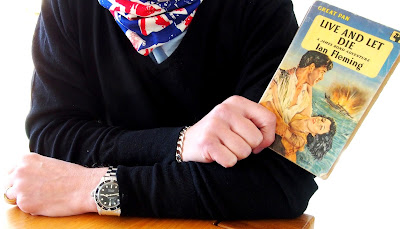 A 1957 edition of Live And Let Die (1954), seen here with the Submariner 5513. I figured I'd put this title together with this watch, since it's the model Roger Moore wore in the movie.


After the doctor's appointment, I had to head over to the Pathology Department to give them another blood sample. The nurse filled a syringe that was the size of a packet of Life Savers.
'Did you leave me any?', I asked after she withdrew the needle.

Got home and made a dental appointment for Tuesday. Looks like I'll be losing a little more blood before this week is over.

Tuesday
Initial Consultation at the oral surgeon. He looked at the x-ray and said he would have no problem removing this tooth. I had a crown fitted some years ago and the upper portion of it dislodged at some point, leaving only the base. My regular dentist recommended removal of the remaining portion. The only problem was that one of the roots had snapped and he, therefore, didn't want to attempt it, so he made out a referral for me to see this guy.
'We could probably remove it now', he said matter-of-factly.

Life is only going to get a little busier over the next couple of months. I spent most of last night worrying about my blood test results. The internet is a terrible thing. However, to deal with as many issues as life throws out, I figured I may as well have this procedure done here and now.
'Well, if you don't foresee it being difficult, then I suppose we might as well', I replied.
Took him about ten minutes, if that. He wrote out a prescription for some pills to deal with any potential 'dry socket' and away I went.
My face is still numb as I write this. I'm still wearing the Submariner 5513; 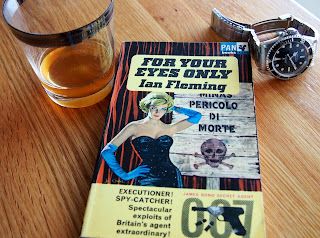 Seen here with a 1963 printing of For Your Eyes Only, a short story collection first published in 1960.
That's tea in the glass. I ain't wasting scotch for a photo.


Wednesday
Spent an hour at the local library, or rather, seated in the foyer of the local library. I got there at 11:00am. On Wednesdays, this library doesn't open till 1:00pm. Anyway, I could still access the Wi-Fi from the foyer, so that's what I did.

I was wearing the Omega Speedmaster Professional, pictured with a 1963 edition of Fleming's third Bond novel, Moonraker (1955);

Thursday
The morning was quiet. The rest of the day would be busier. I picked my daughter up from school at midday. She had an orthodontist appointment to have braces fitted. The doctor would be taking plaster impressions of her bite today. After that, we went home and waited for my wife to get home from work. We then went to see the house we had purchased. We had a few questions for the vendors regarding some minor details like modem location, solar panels, heating, etc. Then we had to take our son to the orthodontist so that he could get his braces tightened.It's been a good week for dentists, that's for sure. Speaking of which, I'd better pop a couple of aspirin. My tooth is a'hurtin'. 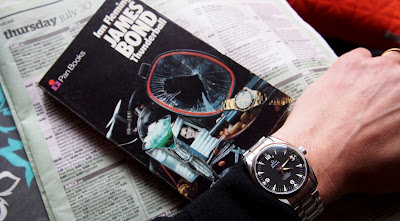 I switched from the Speedmaster to the Omega Railmaster. Today's book is a 1966 copy of Thunderball (1961). I do like these covers. Many elements from the book are featured in the photograph.

Today
Spent a couple of hours at the library, using their internet. Our new 'net plan starts tomorrow. That'll be nice. Tooth still aches a little, but the sun's out. I'm thinking that Spring may start a little early this year. From all reports, though, we could be in for a very hot Summer. Suits me. I've been taking Vitamin D supplements all week. Might be nice to just sit outside and let Mother Nature supply it to me free of charge. 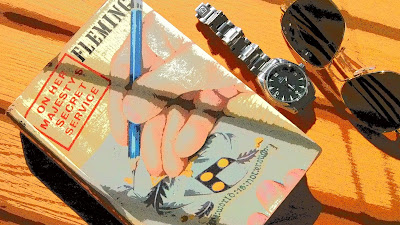 Still had the Omega Railmaster on. Here it is, next to a 1964 (Eighth Impression) hardback copy of On Her Majesty's Secret Service (1963). The cover artwork was done by the legendary Richard Chopping. The camera's Art Filter was set to 'Key Line', which produces a nice animation cell effect. 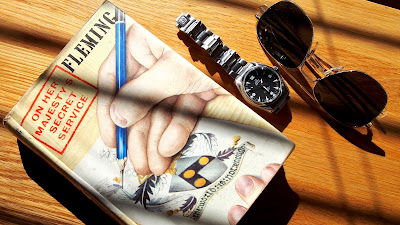 Here's a similar shot in the standard Auto setting. As I said, the sun was out. 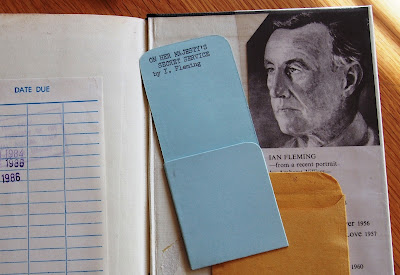 This particular copy of the book is an ex-library edition that I snapped up second-hand. Don't remember where. Inside, it still had the 'Due Date' slip and the typewritten library card holder.

Well, kids, that's another week done. Things are only going to get busier for a while. Yes, I keep saying that, and I keep turning up the following week, but I think I just may be too busy to do a weekly update for a while. Four assignments left to do and then this course is over with. Three of the assignments are fairly straight-forward. The fourth one will require some proper research before it's finished. And then, that's it. Let's just see how much of them I can get done over the coming week or two.

Thanks for reading and have a great weekend!
Posted by teeritz at 21:34