I've never been one for multi-tasking. I don't believe in its effectiveness. At least, not for me. I've always tended to give my fullest attention to one task at a time and, while the end result wasn't always 100%, it was most often done to the best of my abilities.
Which is why I've found it quite a juggling act to deal with study, job searching and house hunting seemingly all at the same time.
Thankfully, the search for a house is over. All that's be left to do will be to pack up everything in our current digs, clean the place for the new owners, clean our new place, and then move our stuff into it. Oh, some pretty serious culling of things will occur during this time as well. The new place is about 130 square metres larger than our current house, but we have no intention of filling up every little corner of the place with 'stuff'.
So, that's one major life-changer out of the way. This week has also seen me complete two more assignments for school. So basically, all I'm left with now is two more assignments, one short online quiz, and a 1200 word report, which will probably blow out to around fifteen hundred words by the time I'm done. And then, that'll be it for this course. It will be done and dusted. Bit of luck, I should be finished with all of this in about a week or two. In the meantime, the job hunting continues.
At any rate, I'm not in much of a mood for a long post, so this one will basically be pictures.
Wristwatch-wise, I've stuck with the one watch for the entire week- The 36.2mm Omega Railmaster Co-Axial.
Okay, let's see if I got the order of days right. 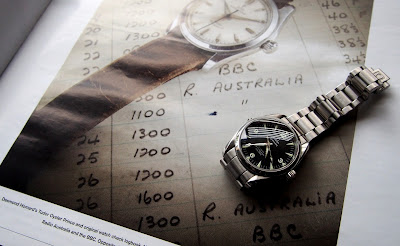 I wore this watch on its metal bracelet. Then I got to thinking. I have a bunch of leather straps that I have rarely used. Why not put one on this watch for the rest of Winter to really put it through its paces? Give it some true wear and tear.
I began to think about my watch-wearing habits. I wear certain watches depending on mood. Which is fine, but then I thought about metal bracelets versus leather straps and I decided I could extend the life of a strap by wearing it over the Winter months when it would be less likely to get wet (intentionally) and wouldn't be exposed to perspiration to the same extent as it would in Summer. So, I sifted through the straps and fished out a ZRC (Zuccolo Rochet Company) brown leather one with contrasting stitch. This particular strap is calf or buffalo (not sure which) and it has an alligator or crocodile (not sure which) pattern embossed on it.

Watch straps can be quite expensive, for what they are. A decent alligator strap can cost you around $350-$450 AUD, depending on the brand. Forget that! For twice that amount, I can get a pair of alligator shoes! Which would utilise a whole lot more alligator skin than a watch strap.

Anyway, on went this faux alligator strap, and it gave the watch a nice vintage tool-watch vibe. A tool watch, by the way, is where the watch performs another function besides simple time-telling. Dive watches (with rotating bezels), GMT watches (able to display a second time-zone), and chronographs (stopwatch function) are all tool watches as I see it. 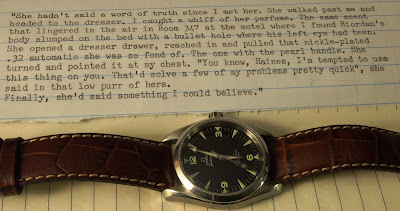 Here it is, with a short bit that I wrote for an eBay listing to show the typewriter's font. Not crazy about this writing, but it was a first draft, written over a few minutes.
I love the contrasting stitching on the strap. It follows on from the dial's hour markers and the Luminova inlays of the hands. Over time, of course, this stitching will darken as it picks up dirt and dust, but this strap is now nicely worn-in, as you can see by the curvature of it. Any new watch strap will normally require a week or two to settle in to the curve of one's wrist. 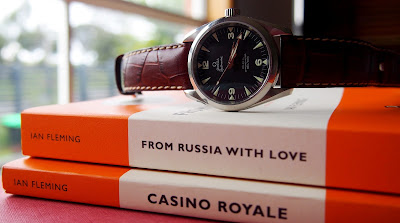 Monday
Seen here with two of the recent Penguin Classics editions of Fleming's works. This 2010 edition of From Russia With Love (1957) was my 'car-copy'. I would read a few pages each day while I waited for the kids to finish school. Took me about six months to read it that way. I thought of doing the same with the 2009 edition of Casino Royale (1953), but I only re-read this book a few years ago and it's still pretty fresh in my memory. 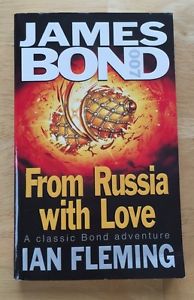 Don't remember what I did. Never mind. The 1965 editions of For Your Eyes Only (1960) and On Her Majesty's Secret Service (1963) featured brilliant cover designs by Raymond Hawkey. More about him later.
The  2002 edition of Octopussy & The Living Daylights (1962-1966) had some pretty lacklustre cover artwork in my opinion. Although, these editions did have their type re-set.
When I worked at Borders Bookstore back in 1998, I was the Genre Fiction Supervisor and was responsible for the crime section (my favourite). I saw that the Fleming books back then had some average artwork on the covers (far right), but the real tragedy had to do with the typesetting of the text. These editions were published by Coronet and the type looked like somebody had taken an old paperback copy from a second-hand bookstore and photocopied each page. The hollow sections (eye and counter?) of letters such as the lower-case 'a', 'e' and 'p' were black on some pages. Granted, literary James Bond was probably not very widely-read back then, despite the resurgent popularity of the cinematic Bond of the Brosnan films, but Mr. Fleming's work deserved better treatment than this.
Thankfully, Penguin Books came to the rescue a few years later with these new reprints. While the artwork didn't thrill me, I liked the font used. The covers were glossy, but they'd cleverly placed the 'OO7' logo on the back in a matte finish. Not very noticeable when viewed front-on, but as soon as you angle it, Bond's Double-O number appears in a circle.
However, flip the book open and you see a nice, clean off-white page with a beautiful new font used in the typesetting. Turn to the verso page to find this information;

Mr. Fleming was finally getting some respect again. 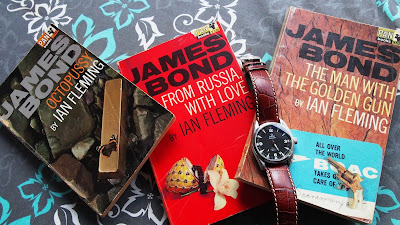 Wednesday
Decided to go to the library, but EVERY SINGLE branch of my council library service was either closed on Wednesdays or didn't open until 1:00pm. So, I headed out to my wife's library service instead. I should have checked the calendar on the wall. I drove out to her library and, once inside, I looked around for her. After about half an hour, I began to suspect that she was perhaps working at another branch. Sure enough, she was, as I found out later on when I sent her a text message. Still had the Railmaster strapped to my wrist. Octopussy (1966, this edition published 1967), From Russia With Love (this edition published 1965) and The Man With The Golden Gun (1965, this edition published 1967) all feature more of Raymond Hawkey's work. By now, Bondmania had well and truly taken hold. Testament to this is the fact that the character's name appears in large, bold lettering on the cover, dwarfing the author's name. The nice thing about Hawkey's designs is that they perfectly capture an important element or motif of the story in one simple image. The cover of From Russia With Love shows The Coronation Egg, which was once part of the Russian Crown Jewels, designed by the legendary Carl Faberge. 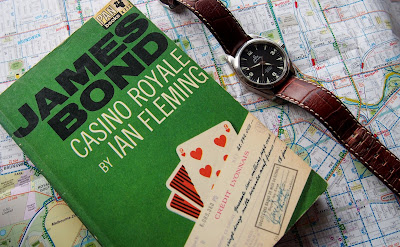 Another Hawkey-designed cover, this 1965 copy (22nd printing!) of Casino Royale is in very good condition, considering that it's a fifty year-old paperback. I placed the book and watch on a street map showing my old stomping ground where I grew up. The suburb has changed quite a lot since I lived there. My Mother's house, which sold a couple of years ago, is situated near a row of light industrial buildings which are in the process of becoming a block of apartments. Parking in our street was always tricky, but I think it's going to become some kind of bloodsport once these apartments are up and running. A lot more hipsters in that suburb, too. I think I got out just in time. 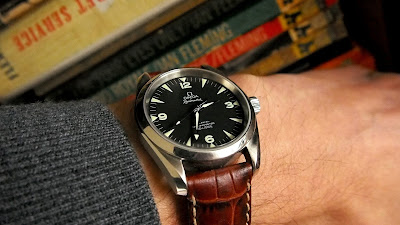 Today
Still wearing the Railmaster. This must be some kind of record for me. An entire week with the one watch. I've been giving my collection some serious thought over the past month or so. I have certain watches that just never get worn. This being the case, there's no real point in holding on to them. So, much like the typewriters, I'll have to give the watches some further consideration to determine which ones should go.
Although, I think I have enough to think about at this point in time.

Finished one of the assignments, checked it, then submitted it online. I wonder if I can get the rest of them done over the next two weeks?

Thanks for reading and have a good weekend!