I've had my Lettera 32 for over thirty years and it served me well during my school years. In recent months, I began thinking about maybe snagging an earlier Olivetti, namely a Lettera 22. Design-wise, it bears a great similarity to the 32. If anything, the 32 looks like a slimmed-down version of the 22.

One model came up on eBay and I began the watching process. It got down to the last 60 seconds of the auction and the highest bid was $19.50. I put in a maximum bid of $43.oo in the final thirty seconds and then waited another 22 seconds before tapping the 'Submit' button. Ten seconds later, I was the winning bidder. It cost me $21.oo + $10.50 postage. I could live with that.
Here's one of the Seller's pics; 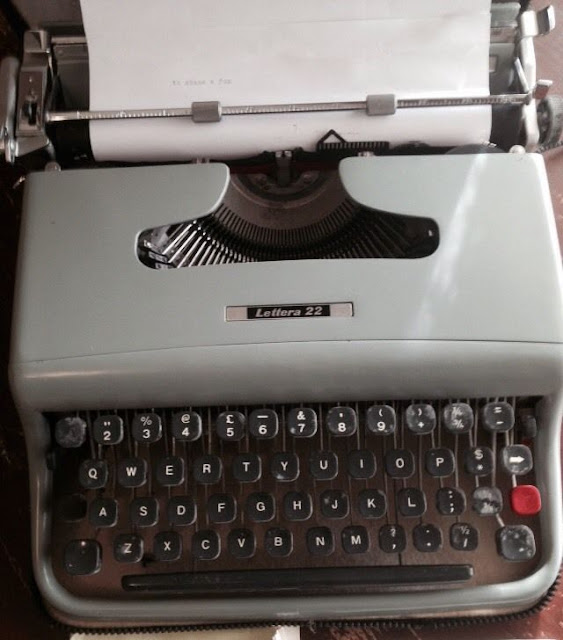 Looked okay. The keytops had some crud on them, but I figured they'd (hopefully) clean up alright. Four days later, it arrived. I cut open the cardboard box to find a bare minimum of padding surrounding the blue-green Olivetti carry case with its dark blue stripe running down the middle.
I gently pulled the case out of the box to find that the zipper was completely undone. Reason being that it no longer zipped up. So, the typewriter was able to freely slide around inside the case.

I pulled the machine out of its case and set it down on the dining room table. It looked like this; 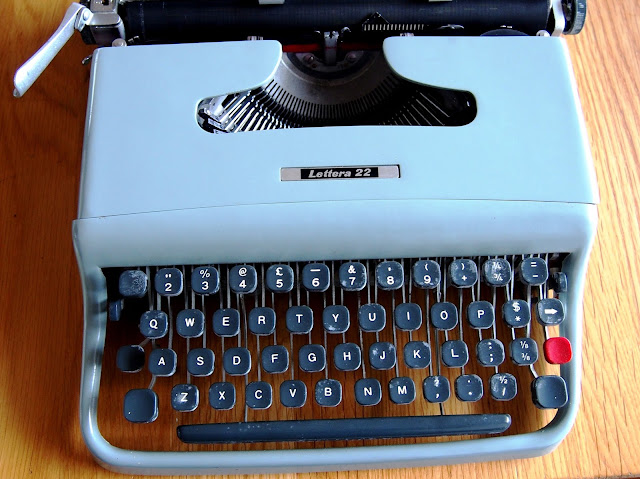 Notice how the ribbon cover is misaligned. See also that the frame around the keybank on the left-hand side is further from the Shift key than the other side. This thing had been dropped in transit. 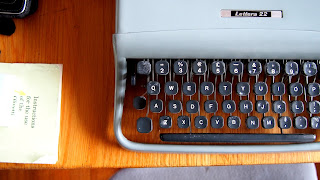 The cardboard box that it arrived in showed no dents or signs of abuse. I can only assume that the box was handled a little too rough during transit and the typewriter bounced around inside its unzippered case. I sent the seller a couple of pics showing how it looked. He replied next day, saying he hoped I got some resolution with Australia Post. I had planned to put in a complaint with our postal service, but they make it a very convoluted process.
I replied to the seller, saying that I didn't know if he'd ever shipped a typewriter before, but they do require the use of some scrunched-up newspaper in order to prevent this sort of thing from happening. Especially if the case doesn't zip up.
Needless to say, I haven't heard back from the seller. I don't think I'll leave him any feedback, good or bad, but if he contacts me to ask why I haven't left it, I will ask him just what kind of feedback he'd like me to leave, considering how he packed the item.

Anyway, I looked at the typewriter for a few minutes and began thinking of how I could reshape the frame. Granted, I doubted that it would go back to its perfect original shape, but I felt that I could get it looking better than it was. My first idea was a slightly complicated one that would involve placing the frame down in a doorway against one frame and positioning a car-jack against the opposite frame of the door and then seeing if I could slowly re-form the Lettera 22's frame.

Then, I had a better idea. Why don't I just grab that IKEA tool kit that I got for Mrs. Teeritz last year and just have a bash at the frame with the rubber-tipped hammer?
Yeah, that would be a simpler and faster process. Worst-case scenario? The frame snaps. Still, this thing didn't cost me too much, so I figured it was worth a shot.

Here's what I typed up yesterday. It's a little repetitive. Sorry;

It certainly looked better by the time I was done. The colour was now beginning to bug me. Because the shape of the 22 is so similar to the later model 32, I wanted to differentiate this machine in some way. But more about that later. There was one other thing wrong with this typewriter. As you may know, you only have to undo four screws in order to remove the shell off these typers. There are four metal brackets where these screws are located. These brackets hold the shell to the internal framework. However, one of the brackets... 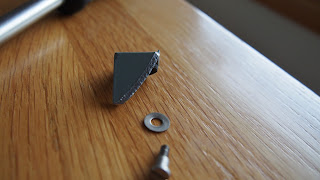 ...had sheared off. It began to look clearer to me at this point. The machine had received a hard knock on the right-hand side of the frame near the Shift key. This would have caused the bracket over on the left-hand side (near the tension control switch under the ribbon cover) to snap off.
The one on the right-hand side was still intact; 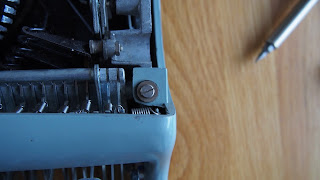 Now, unbeknownst to me at the time, this snapped-off bracket was making it very difficult to lift off the ribbon cover. I was worried that the cover might bend or snap if pulled too hard. I decided to leave it be and ponder on it for a few days.
Back to the colour of this machine. It is that famous Olivetti shade of teal blue or green, depending on your colour perception. The colour that was used on a zillion Lettera 32s. I wanted to change it and, as luck would have it, I had a can of spray-paint in the garage that would be just about perfect for this machine.
I covered the badging and sound-proofing felt with masking tape and spent a couple of days painting the frame. First coat left a few streaks as I got the hang of using the can. I sanded the entire frame lightly, removing some of the new colour, and some of the old colour, which exposed the bare metal underneath. The paint I used was self-priming, too. Next day, I gave it another coat. Four hours later, a light touch-up here and there. Later that night, I brought it inside and left it in the lounge room where it would be warmer overnight than the garage where I had left it the day before.
Next day, I re-attached it to the typewriter and it now looked like this. Ciao, bellezza! ; 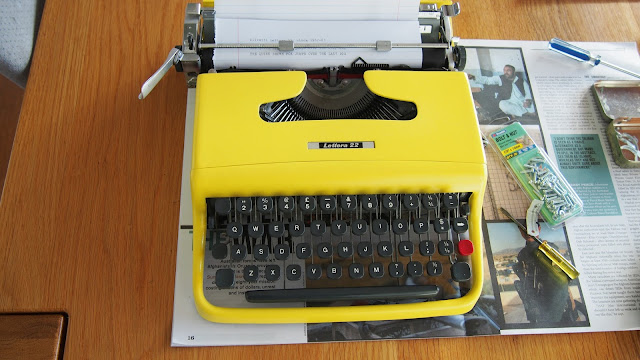 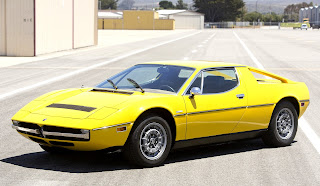 I was glad to see that the stains came off the keytops easily, too. All they needed was a light brush-down. I often wonder why people sell stuff on eBay without cleaning it up a little.

Further handling of the frame as I installed and removed it a few times did cause some paint to scrape away here and there, but that doesn't bother me too much. Now that I know how   simple it is to remove the shell, I can always give it a more permanent going over some day, if the mood strikes me, or if the machine ends up looking too  tattered.

It turned out okay. The coats were fairly even, and I was able to keep the colour off the badging; 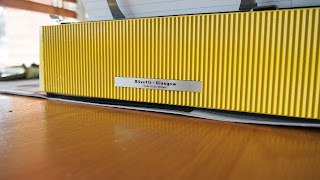 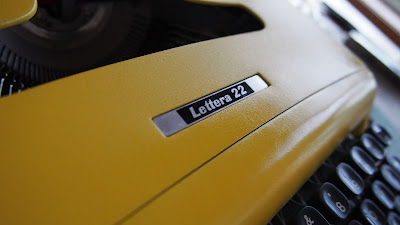 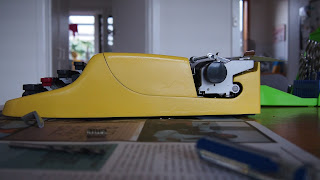 Now, to tackle the missing bracket problem. I went to my local hardware store and picked up a small metal bracket and some nuts and bolts. If I was going to fix this thing, I knew I would have to make a slight cosmetic change to the shell.
I got home, got out the tin snips and got to work on the metal bracket. I cut it into a smaller strip of metal, seen here in the bottom right of this picture, next to the screwdriver head; 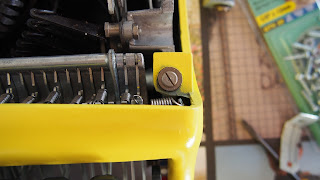 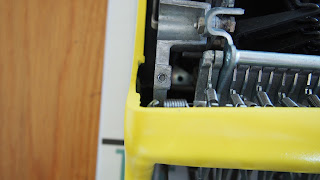 I almost wasn't going to bother trying to fix this, but I had noticed a little bit of 'play' in the frame on the left-hand side when any pressure was placed on it. I had briefly contemplated trying to re-attach the broken piece of steel, but nah. That seemed like it would be a bigger job than I could handle.
Out came the drill. The new bracket was already pre-drilled in parts, but I needed to make the hole on top of it larger so that I could fit the original rubber washer back into it. It got a little tricky here. Rather than use a pair of pliers to hold the piece of steel while I drilled, I instead just held onto it by hand. As soon as I started drilling, the bracket caught on the drill-bit, effectively becoming a propeller. With the imagined result.
Three Mickey Mouse Band-Aids later, and I was back in business, this time with a pair of pliers in my hand. I then wrestled the  rubber washer into this new, larger hole and screwed it into place.
Now, the slightly trickier part. This new, thin steel bracket extended down between the shell and the internal frame-work. I used a pencil to mark where the bracket sat and then I unscrewed the frame (again!) and stepped outside with the frame and the drill. I would really have one chance to get this right.  I drilled a small hole into the side of the typewriter shell and through the steel bracket.
Once that was done, I  gently screwed one of the small screws into the holes and fastened it with one of the bolts. The screw was a tad too long and was scraping against the internal framework, but the tin-snips solved that problem quick-smart. Now, it looked like this; 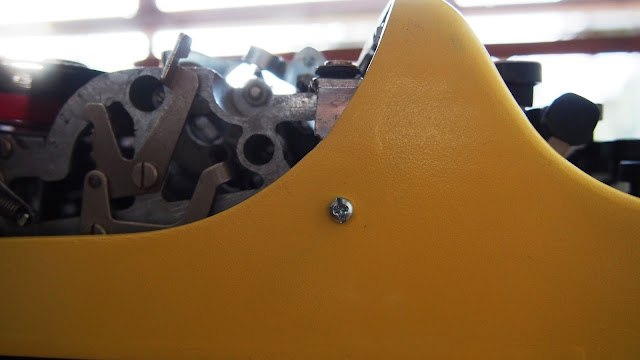 Here's a slightly more detailed pic, although it keeps coming up sideways; 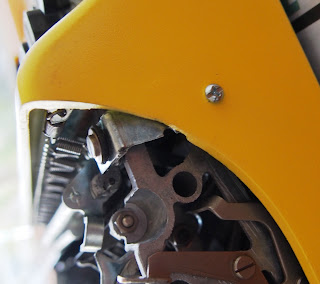 I'm tempted to paint that screw red, just to give it a little more of that '70s sports car vibe. Once this piece was secure, I screwed in the remaining three points and, lo and behold, the ribbon cover now comes off as easy as it should.

So, after all this palaver, was it all worth the effort? I have to say I love how this thing types. It certainly feels very similar to my Lettera 32. However, what I really like about this machine is the 12pt sized font. My Lett 32 is a 10pt, as are quite a few of my machines. I've realised that I prefer  the smaller 12pt size. Although, in saying that, I'll never get rid of the Lettera 32. Too much history with that typewriter. Even if it does need a serious clean-out of all the accumulated dust inside it.
Now, the only thing left to do is maybe change the zipper on the case or perhaps make an entirely new case for the machine. Out of timber. Yeah, maybe I should try putting a new zipper on the existing case.
Here's one more shot of it, showing the chipped paint. 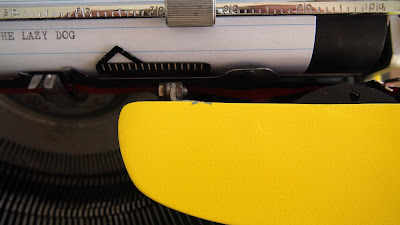 And that's it. Now, I'll have to move a typewriter or two as part of my 'one-in, one-out' collecting strategy.
Once the cuts heal. 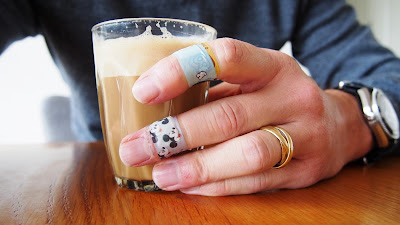 * Special thanks to Reverend Ted for his brilliant site, The Typewriter Database.com , which helped me pinpoint the year of manufacture.
PayPalled you a Bond Fan's donation earlier today, sir ;-)
Posted by teeritz at 03:36