The Typewriter Collection No. 17 - Smith-Corona Skyriter, circa 1954 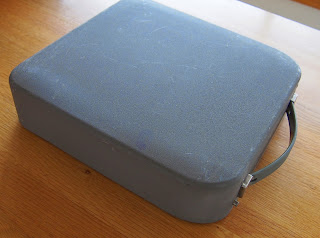 I like the sleek and low-profile case that it arrived in. The handle looks a little fragile, though. I may replace it with leather. I'm also considering giving this case a paint-job, but I'll have to give some serious thought to how I remove the existing colour.
Having read a few recent posts by Baesun on his blog...
Of Type and Ink - Updates and Painting Skyriters
...I'm reluctant to go messing with lead paint and all of the associated risks. I may try a solution called Ripper Stripper to remove the old colour. 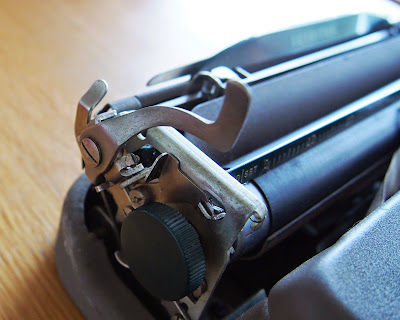 Not sure how I feel about this carriage-return lever. It's shorter than I'm used to, and I have to say it can feel a little 'aggressive' against the finger. Almost feels a tad sharp, to be honest, though this is nothing that some light filing or sanding down wouldn't fix. 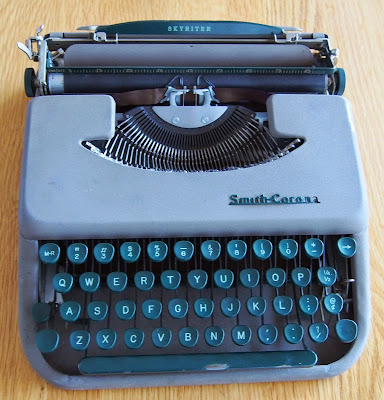 I love how this machine types. Very responsive. I removed the two screws which, remarkably, make it possible to remove the entire inner workings from the outer shell, and began to once again think about changing the colour of this typewriter from its industrial grey shade to something a little more eye-catching. Maybe a pale cream colour to contrast against the dark green keytops and Smith-Corona logo on the ribbon cover.
However, I'm not sure about this. I don't really have the time to devote to such frivolities right now, but it is something to ponder.
But, man, that carriage-return lever has me slightly bugged. I had one other thought; I'm thinking of keeping an eye out for the Sears version of this machine, the Tower Chieftain III. Looks pretty much exactly like a Skyriter, but it has a longer return lever and a nice, cool 1960s logo. From what I gather, the Chieftain III was made in the early to mid Sixties. I hope they have a similar typing action to this Skyriter. Anybody who has both of these machines, feel free to chime in with an opinion.
I know I could go for a later model Skyriter from the early '60s, but I'm thinking that a rebadged Smith-Corona, i.e; the Tower,  would break up the collection a little. I already have three S-Cs, after all.

The rubber feet have seen better days, but they're still intact. I will still replace them with some new rubber at some point to provide some better grip.  Other than that, this typewriter is in great working condition. Looks like the kind of thing an engineer from McDonnell-Douglas would have carried around in the mid-Fifties while Chuck Yeager broke through to Mach 2.44.
They bred 'em tough back then.