This year looks like it's shaping up to be a good one if you're into spy movies. Some blogs and websites have already dubbed 2015 as 'The Year of The Spy' based on how many espionage thrillers are slated for release this year. I figured I'd be hitting the cinemas quite a bit in an effort to catch as many of these films as I can. 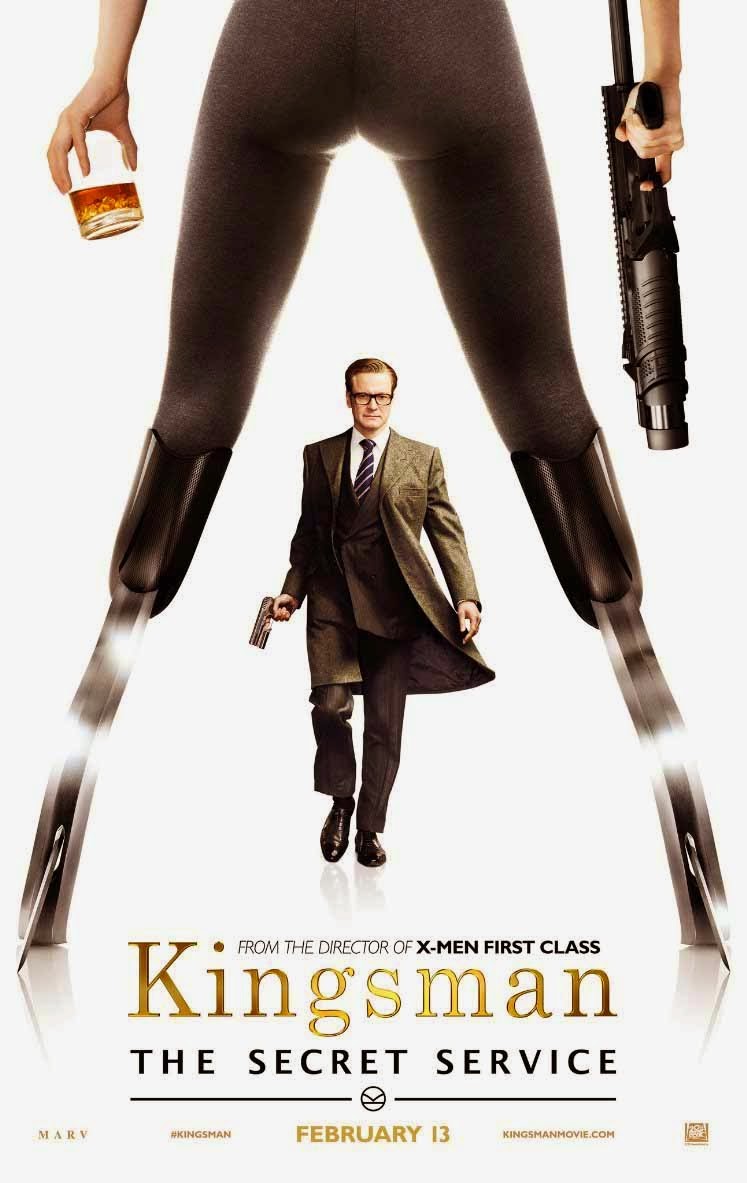 First cab off the rank is Kingsman- The Secret Service, directed by Matthew Vaughn, screenplay co-written by Vaughn and Jane Goldman, based on the graphic novel series by Mark Millar and Dave Gibbons.

I've liked Vaughn's past work. He was the producer of both Lock, Stock, and Two Smoking Barrels (1998) and Snatch (2000) before turning to directing with the impressive Layer Cake in 2004, which served, in my humble opinion, as Daniel Craig's resume which got him the role of Bond in Casino Royale two years later.
Vaughn went on to direct Stardust in 2007, a clever and entertaining fairytale reminiscent of The Princess Bride (Dir: Rob Reiner, 1987) before going on to make the highly successful Kick-Ass in 2010 and X-Men: First Class a year later.
These last two films showed that Vaughn knew his way around an action scene. Much was made of the ultra-violent scenes in Kick-Ass because most of the carnage (and some incendiary profanity) was meted out by Hit-Girl, played by eleven year-old (at the time) Chloe Grace-Moretz. I suppose, given that this film was also based on a comic book, there was bound to be some violence in it. To be fair, though, the violence in this film is indeed stylised and flamboyant and I have to say that it didn't bother me. I get far, far more unsettled by the more realistic violence in 'kitchen-sink dramas' where an abusive parent takes their frustrations out on their spouses and children. I get more depressed by reading news reports of another cowardly IS hostage execution. And as much as I'm looking forward to seeing Eastwood's American Sniper, I'm sure that it will have some morally disturbing scenes in it.
So, for me, something like Kick-Ass was so unrealistic in its depictions of violence that I could sit there knowing that it was all just a movie and not be bothered by it all.
You views may vary. Which is fine.

Anyway, back to Vaughn's latest film. I was greatly looking forward to Kingsman. With the new Bond film still about ten months away, I'll take whatever spy thrillers I can get. Kingsman had a nice sheen to it. I liked the idea of a secret organisation of gentlemen spies who dressed well and took on outrageous villains. As you can see in the poster above (a nod to the poster of For Your Eyes Only), there's a woman in this film with blades instead of prosthetic legs. You know they're going to be put to gory use. If you're not into this type of stuff, then go see something else.
I was also looking forward to seeing Colin Firth
in this type of action film. 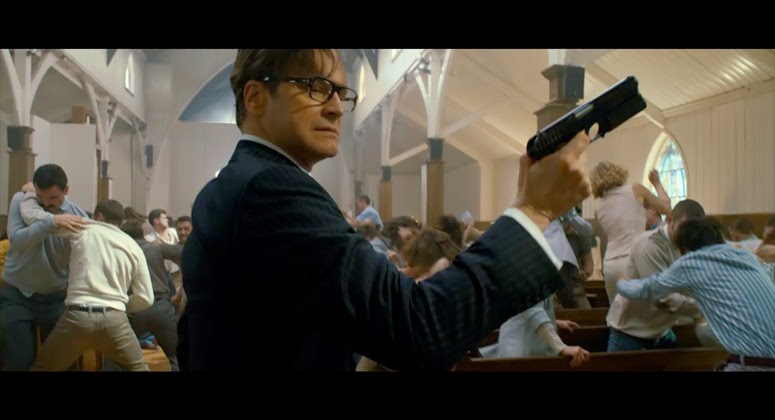 I have a theory that a lot of actors want to play James Bond at least once in their careers.
George Clooney did The Peacemaker.
Brad Pitt did Mr & Mrs Smith.
Matt Damon did the Bourne trilogy.
Tom Cruise has Mission Impossible 5 on the way.
Firth turns in a great performance in a role unlike anything he's done before. His character, Harry Hart, is sharp and refined all throughout the film. This scene here, which takes place in a church during a fire & brimstone service, comes out of left-field and we see just how 'efficient' Hart is at his job. I'll say nothing more about it. It's a scene that has garnered some controversy, to say the least, but it all makes sense in the fabric of the film's plot.
I won't give much of the story away. It concerns a young street punk named Gary "Eggsy" Unwin (Taron Egerton) who is taken under Hart's wing to be recruited into the Kingsman service. Naturally, it's a 'rough diamond' story where we see Eggsy having to prove himself worthy to be accepted into this secret organisation as he goes through training exercises with a few other youths, most of whom come from more affluent backgrounds. That's one part of the tale. The main story involves a billionaire tech nerd, played by Samuel L. Jackson, who is bent on saving the world by taking out a very large portion of its population. That's all I'll say.

SPOILER ALERT***SPOILER ALERT***SPOILER ALERT
There was one scene that marred this movie, in my opinion. In the film's final battle, Eggsy rescues a Swedish Princess who tells him that, if he can prevent the villain's dastardly plan from going ahead, she promises him...well, there's no way to put a polite spin on this. She tells him she'll let him have anal sex with her. This seems to spur him on to succeed in his mission.
My main problem with this scene is that it contradicts everything we've seen and heard thus far about the Kingsman organisation being made up of gentlemen. Harry Hart has a saying; 'Manners maketh man' and he later quotes from Hemingway, stating; "There is nothing noble in being superior to your fellow man. True nobility is being superior to your former self." The Princess's offer of this sexual taboo, and Eggsy's anticipation of its fulfilment, goes totally against all of this, and I felt that it wasn't needed in this film.
One more thing- I really liked Colin Firth as Harry Hart. It's a shame that, if a sequel is made, he won't be in it. He was the best thing in this film.
***END OF SPOILERS***END OF SPOILERS***END OF SPOILERS

This film is an obvious nod to Bond and The Avengers' John Steed, with their world of finely tailored suits, properly made Martinis and the sound of an automatic pistol being cocked. It definitely doesn't take itself too seriously and it moves at a good clip. With more than a few of the tropes that early Bonds like Goldfinger are known for, it shows that Matthew Vaughn and his team are well-versed in the world of classic film Bond and other spy films of the 1960s. The film is played for laughs, the action scenes are well-staged, and the entire cast does a fine job. Firth is a joy to watch in this film and newcomer (to me, anyway) Taron Egerton could be big in British cinema if he plays his cards right.
Perhaps the only thing missing from a film such as this would be a car chase, but who knows, that may be in the pipeline if this film spawns a sequel.
All in all, Kingsman- The Secret Service was a fun film. Not a perfect film, but if you view it with the right mind-set, then it's a great piece of entertainment.

Okay, nothing left to do until the next spy movie release of the year. I think it's The Man From UNCLE remake.