Oh, but there's much to be done around here over the next few months. Our house goes on the market early in the new year and we need to get it ship-shape, so I've been pottering along making minor repairs here and there. But enough about that, otherwise, I'd run out of internet before I finish listing all the little tasks that need to be taken care of.

Tuesday
Got an e-mail from one of my lecturers asking if I had sent her my final assignment for her subject. I must say that this subject was a little confusing in that all six assignments didn't have due dates listed on them. You may recall that I hammered out four of those assignments back in September. I did that as a safe-guard, since I didn't know when they were due. I figured if I got the majority of them done, then I'd be a step or two ahead of the game, so to speak. This last assignment (which was actually Assignment No.1) involved monitoring the effects of sunlight and humidity on different types of paper (FYI, newspaper comes off the worst). This exercise requires time, more than anything else. All you do is pin the papers up where they'll receive the greatest amount of UV light. And then you wait.
Here's what two months of steam from a kettle will do to a handwritten letter; 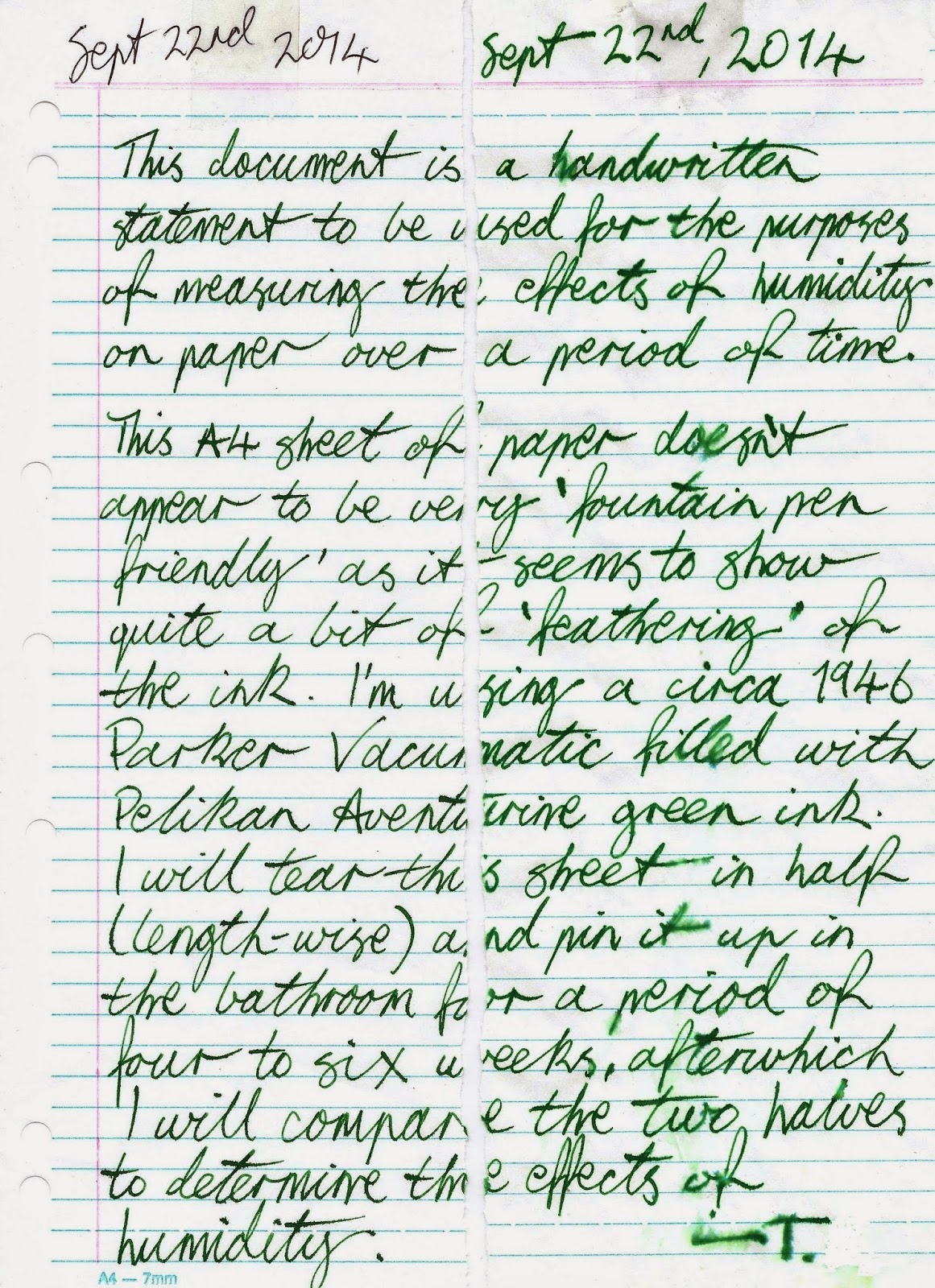 Anyway, I hadn't started this assignment yet. I thought the entire class had been given an extension until early January. However, it was my wife who suggested I get it done sooner so that "that way, it's done and you don't have to think about it anymore."
So I sat at the computer and got to work on it. I had six paper samples, ranging from archival-quality, to a sheet of loose-leaf, to a page out of a cheap paperback.
Monitoring the effects of sunlight on these, the paperback page turned a pale and dirty yellow. The newspaper sample lost all of its colour and it also faded to a darkish shade of white. All of this led me to the conclusion that, if you have any writing that you feel is of some importance, it would be best to print it on archival quality paper. This paper is pretty cool. It has been certified to have a life-span of five hundred years when stored correctly. That's cool. Now, if only any of my writing was worth saving for five hundred years.

Wednesday
Bills, bills, bills. As this year draws to a close, I'm aiming to clear the slate. So I sat down and worked it all out before heading out the door. When I got home, I checked them off. Always a good feeling. I'd been wearing the Omega Seamaster Planet Ocean; 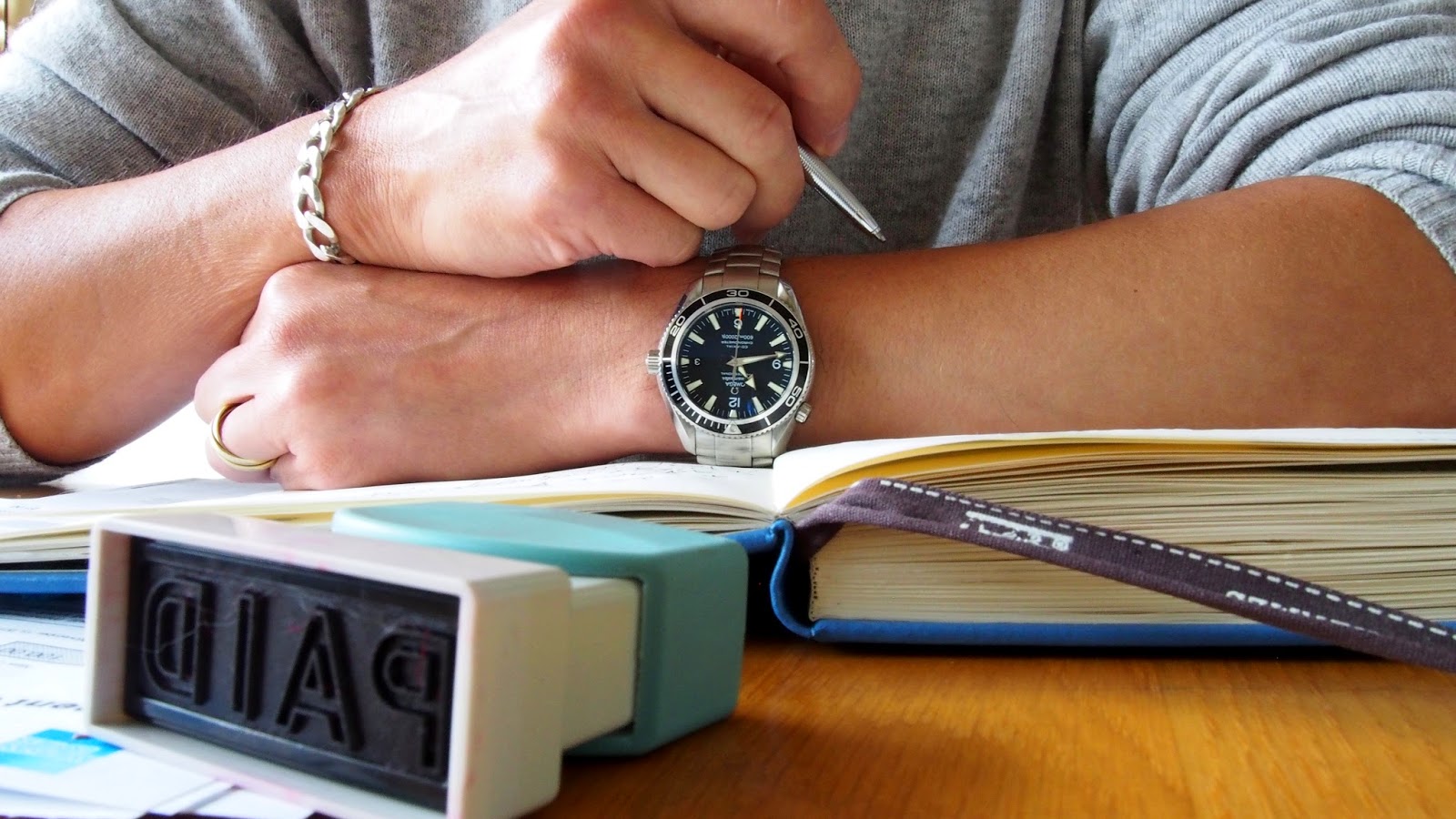 Later that day, I switched over to the Tissot Visodate. I was losing track of what day it was; 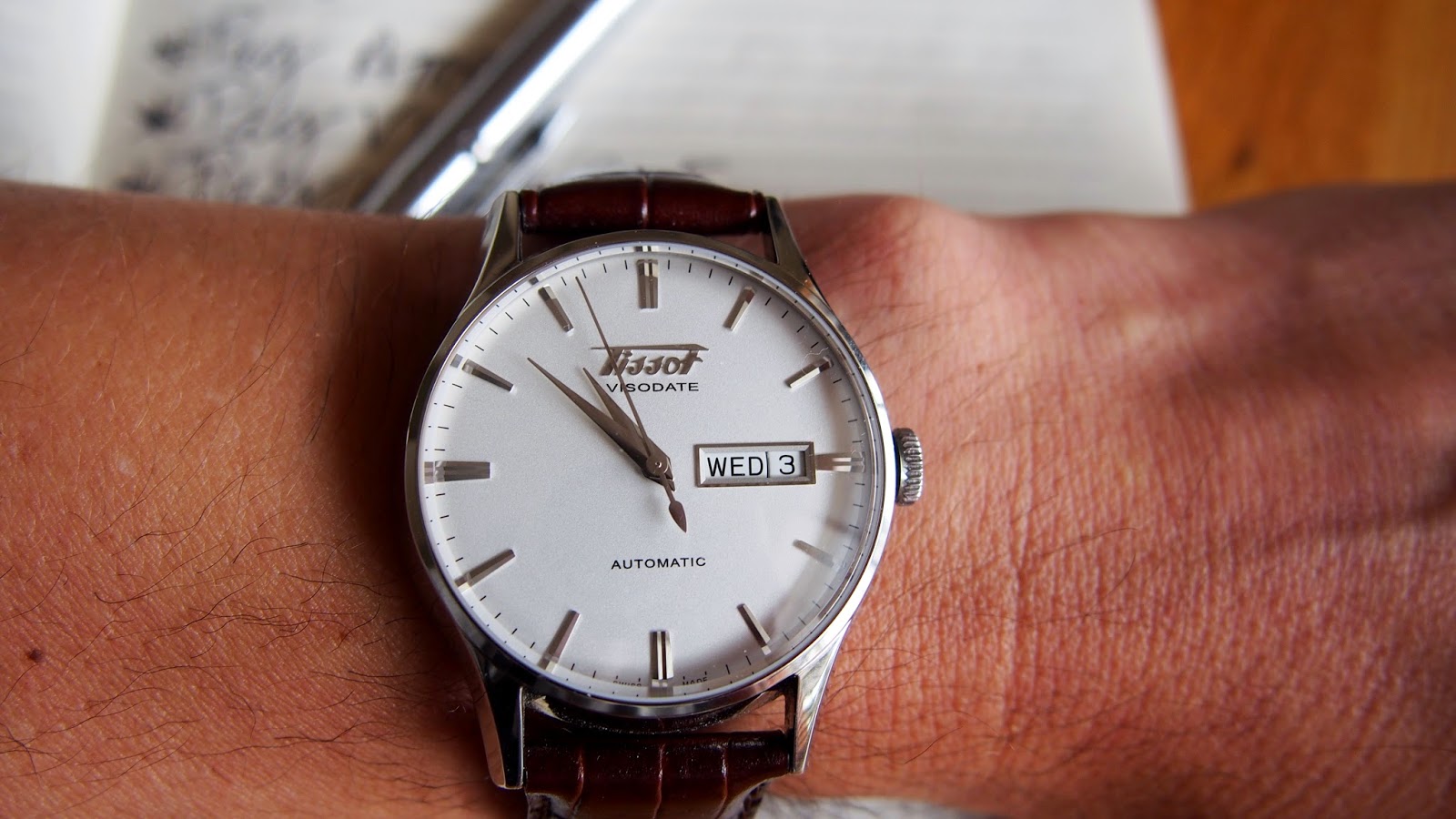 Thursday
Decided to go get the dial swapped over on my Seiko 7002. You may recall that it's a watch that I wear for handyman duties around the house, and it currently has it's original black dial, but with an after-market orange chapter ring; 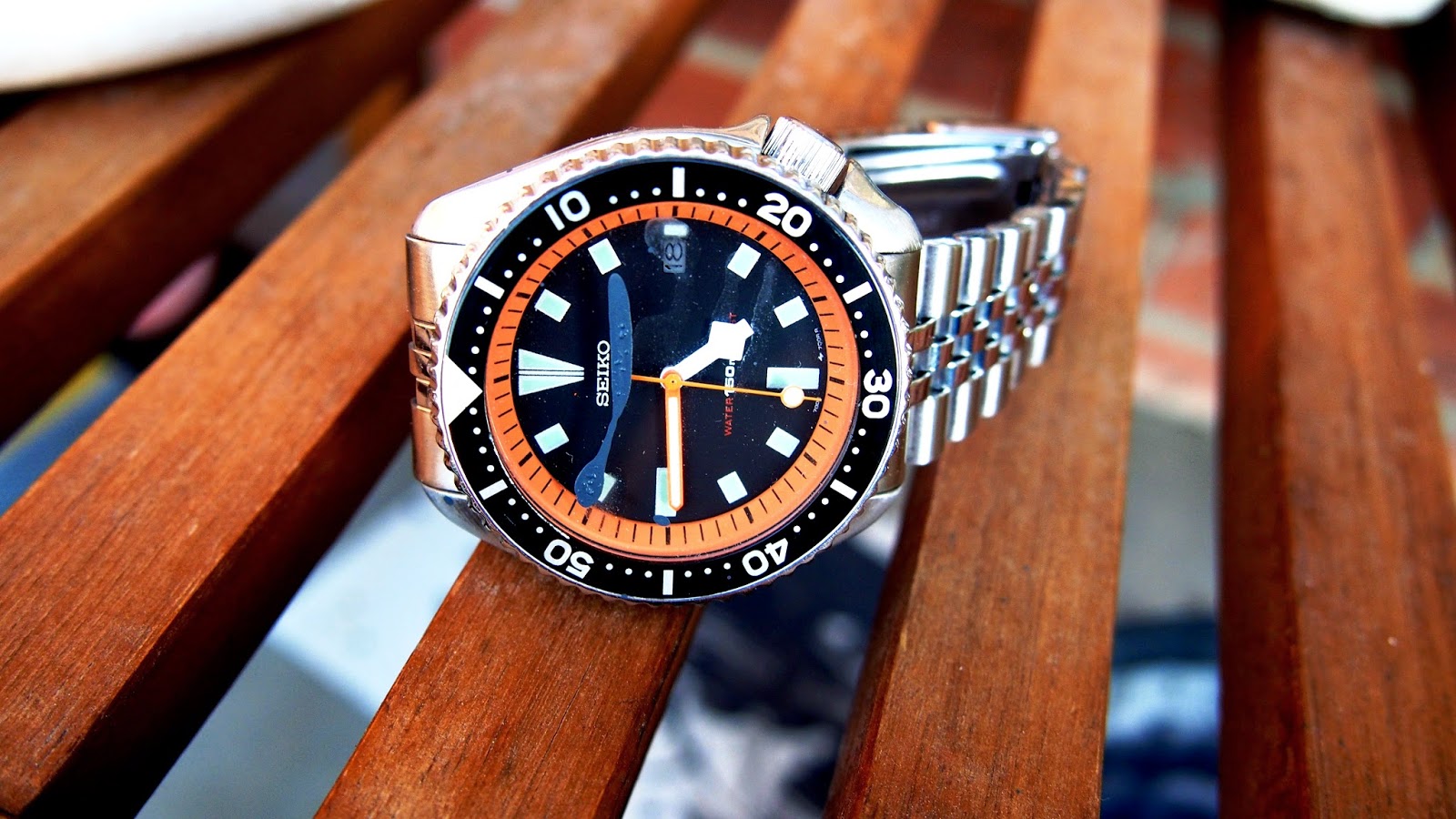 However, ever since I got the steel bracelet for it, I wanted to have the dial switched over. To this colour combo; 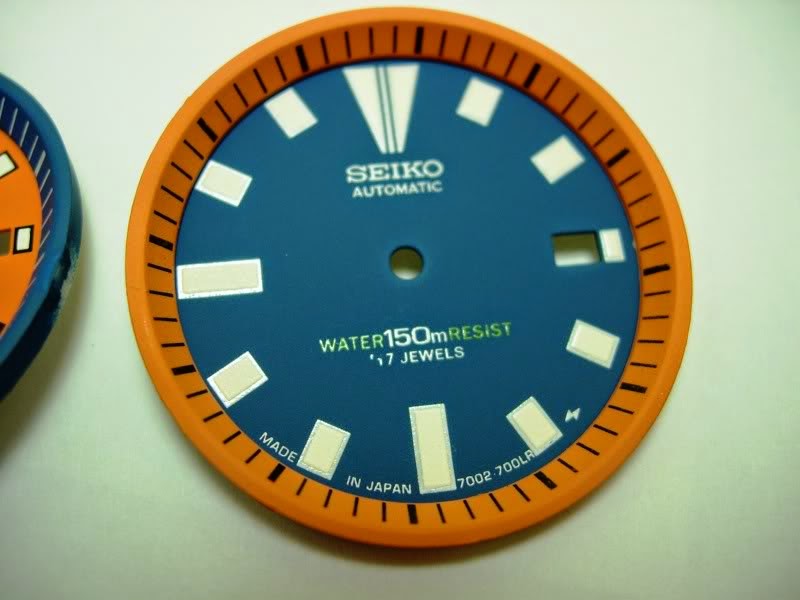 Should be ready next week. And, because I hadn't worn this one in quite a while, I put on the Omega Seamaster AquaTerra. Because sometimes, you need something that's a little more under-the-radar; 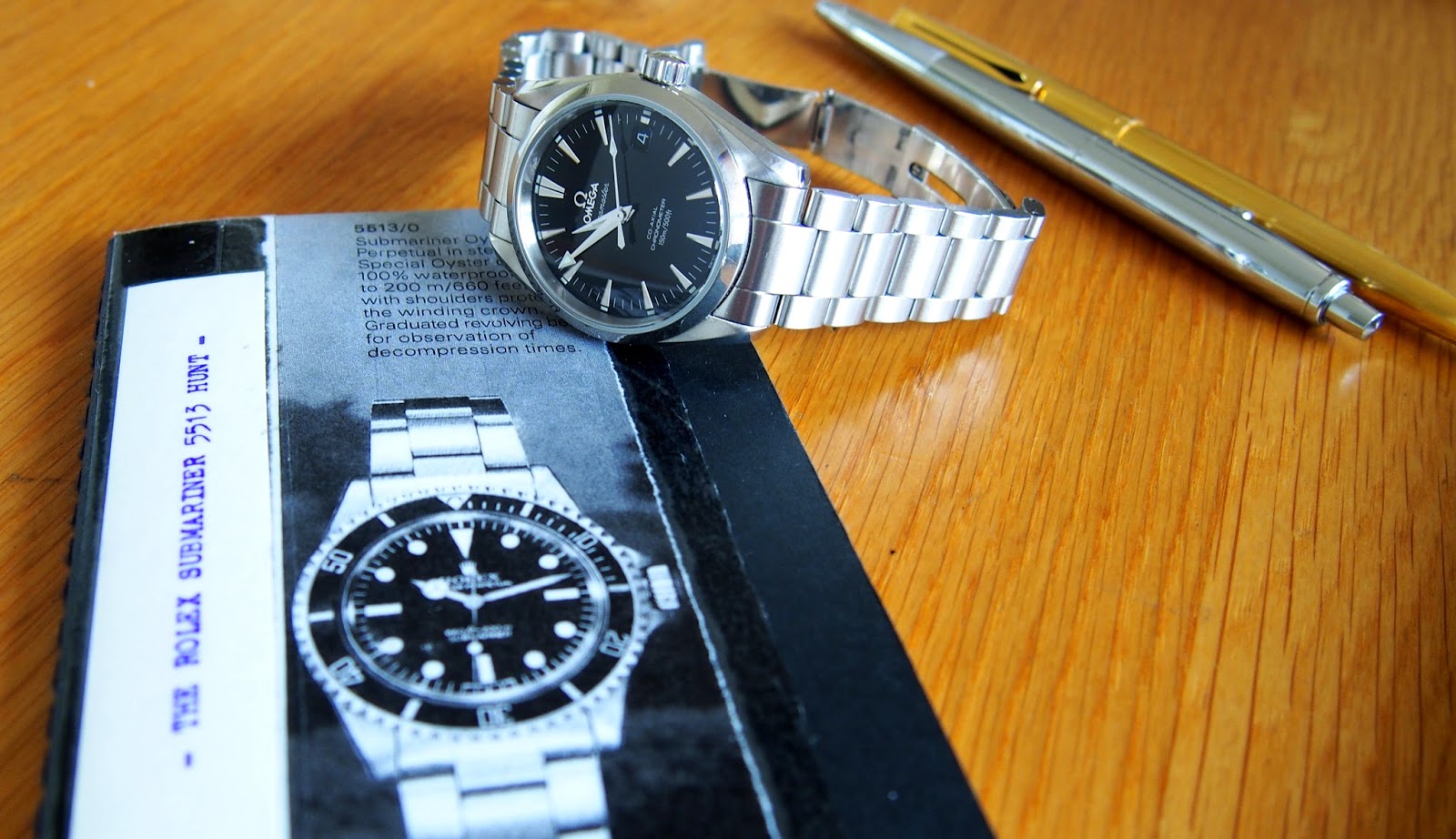 And later in the evening, it was time for the live stream from www.007.com where Director Sam Mendes announced the title and cast for Bond 24, which commences shooting in a few days. And the title is... 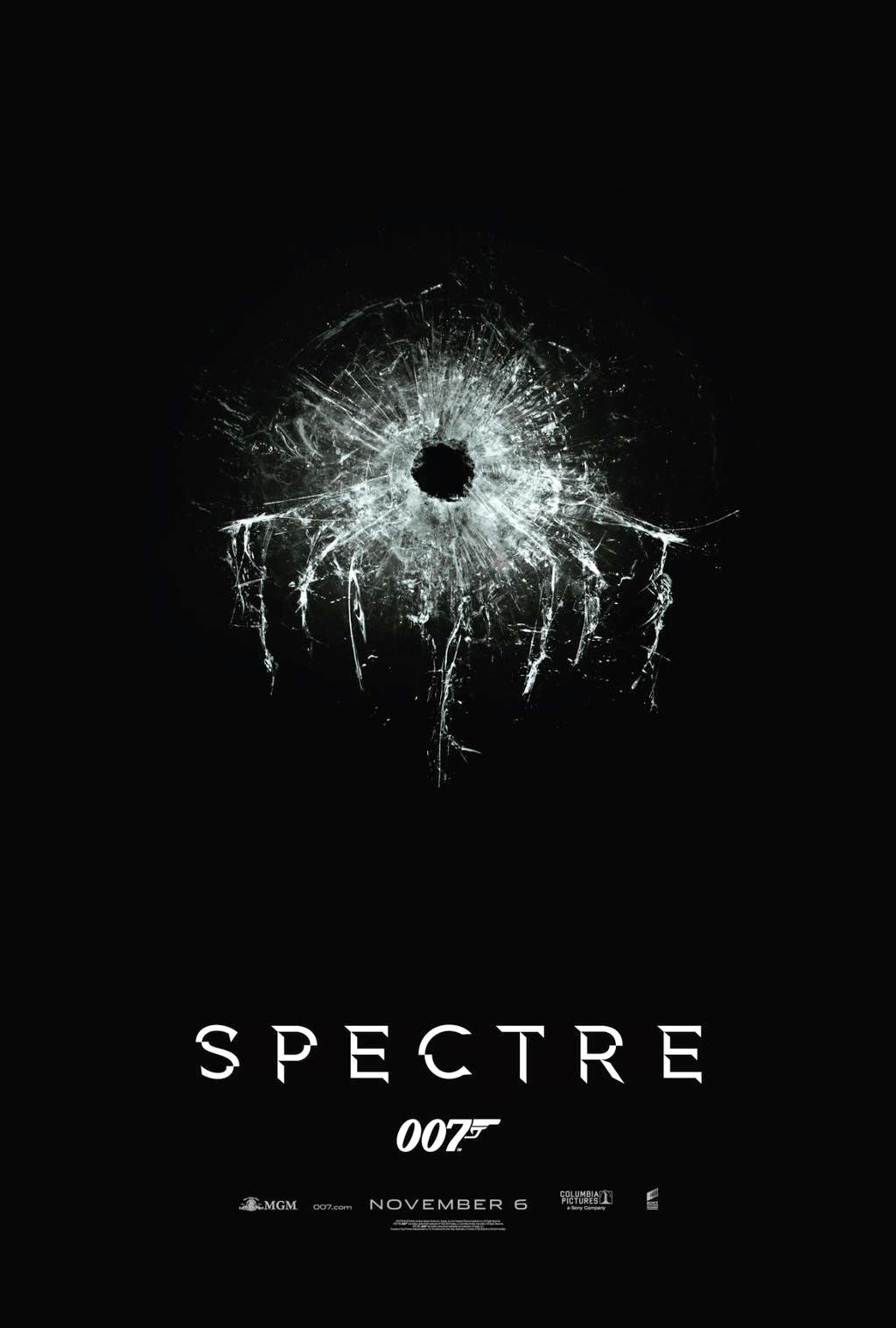 Cool! As you may know, EON Productions finally secured the rights to Thunderball and, more importantly, the characters and organisations associated with it. This means that they can finally bring back Bond's arch-nemesis, Ernst Stavro Blofeld, the head of S.P.E.C.T.R.E, the SPecial Executive for Counter-Intelligence, Terrorism, Revenge & Extortion. Certainly, it all sounds comic-booky in this modern age, but given the cast, the writing talent behind it, and Sam Mendes' sure-footed directing, I think they'll be able to pull it off convincingly enough.

I've had my own theories in recent months regarding the storyline and cast. There had been rumours kicking around for a while that Blofeld would return. I began day-dreaming about a pre-credits sequence where we see the criminal organisation Quantum (remember that they were behind the events of Casino Royale and, obviously, Quantum of Solace) pulling off some major robbery/terrorist act only to be completely wiped out by a rival (and bigger) organisation, namely SPECTRE.
This would mimic the space-craft and submarine hijacking sequences that we saw in You Only Live Twice (1967) and The Spy Who Loved Me (1977).

When I read that Dave Bautista had been cast, I had visions of him being Blofeld. If you're gonna give Daniel Craig's Bond an arch-nemesis, then it would make sense for the actor to be the kind of size and build that would pose a serious threat to 007. The only problem with that is that he would come across a little too much like Tom Hardy's Bane from Christopher Nolan's final Batman film, The Dark Knight Rises. And, of course, my day-dream opening sequence mentioned above would bear a too-striking similarity to the opening scenes of Nolan's film.

Then we got the news a month ago that the brilliant Christoph Waltz had been cast, and I began to view him as a modern Blofeld who wears designer suits and jets around the world as some criminal mastermind.

With the unveiling of the cast during the live stream, we saw Andrew Scott. Now, he did an awesome job as Jim Moriarty in the British series, Sherlock, starring Benedict Cumberbatch, but I began to hope that he wouldn't end up being Blofeld in this new Bond film. While it might make sense to have a young criminal genius go up against 007, Andrew Scott has already done so, to devastating effect, against Sherlock Holmes.

And Monica Bellucci has been cast in this film as well. I don't remember much after that.

Story-wise, it's a tricky one. Screenwriter John Logan has stated that writing a Bond film is hard. I believe it, because it's all too easy to fall into pastiche territory if one is not careful. Long-time Bond scriptwriters Neal Purvis and Robert Wade were brought in for this script. Now, I have been critical of these two writers in the past, but I will gladly eat some humble pie and say that they have done some stellar work over the years. Yes, I wasn't crazy about each successive Brosnan Bond film and I found little of value in the final one he did, Die Another Day, but I've come to suspect in recent years that they were writing the kind of Bond films that everybody involved thought that audiences wanted, rather than the kind of Bond films that audiences needed. So, sorry, gents. I was a little too harsh in the past. It's no easy task writing a 007 adventure. I hope you guys had fun with this new one.

Today
And now that the title and cast have been revealed, there's really not much else to do except get on with life and listen out for tidbits of info and photos as they come to light during filming over the next seven months. Of course, the watch nerd in me tried to get a decent glimpse of what Daniel Craig had on his wrist. I suspected that it was his vintage Omega Seamaster 300 that he's worn in the past. I needn't have worried. Pictures began to surface on the web by the time I got up this morning; 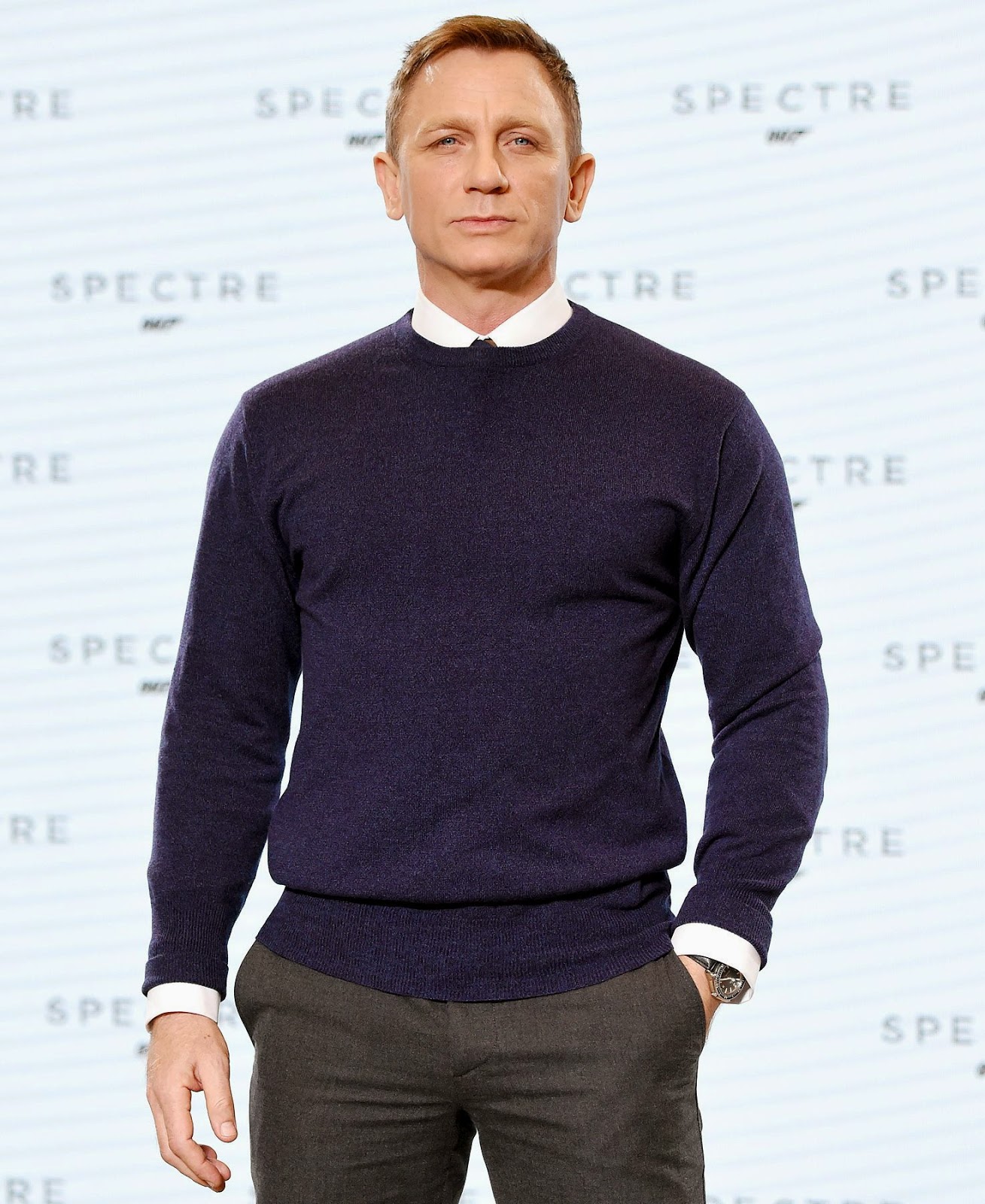 And a close-up shot confirming my initial guess; 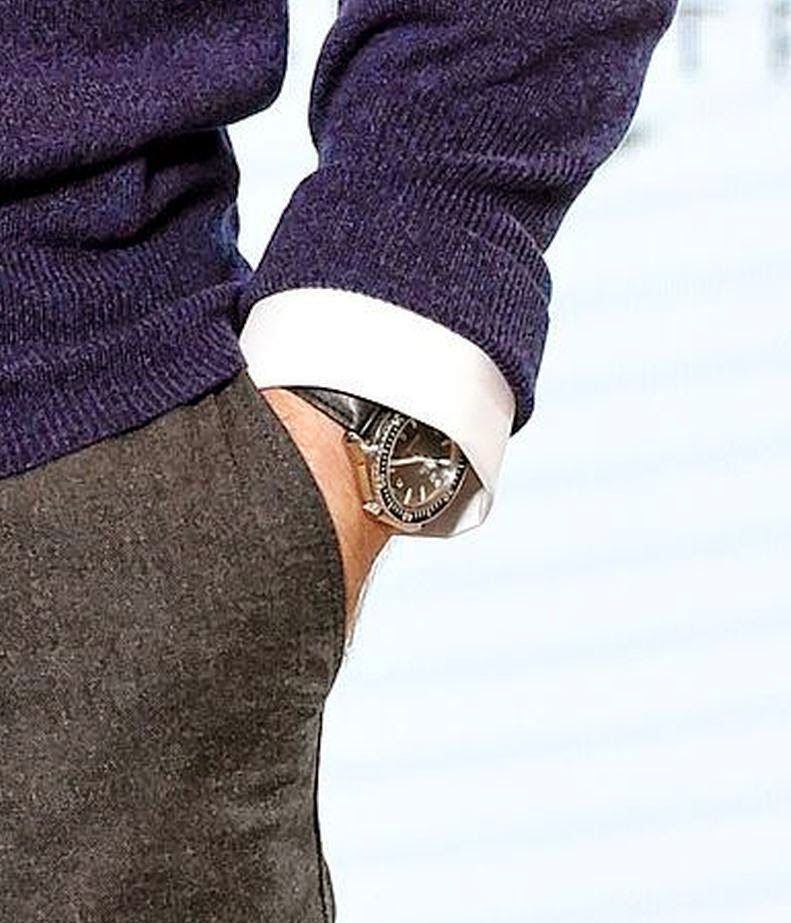 Cool!, I thought. I can play this game too. 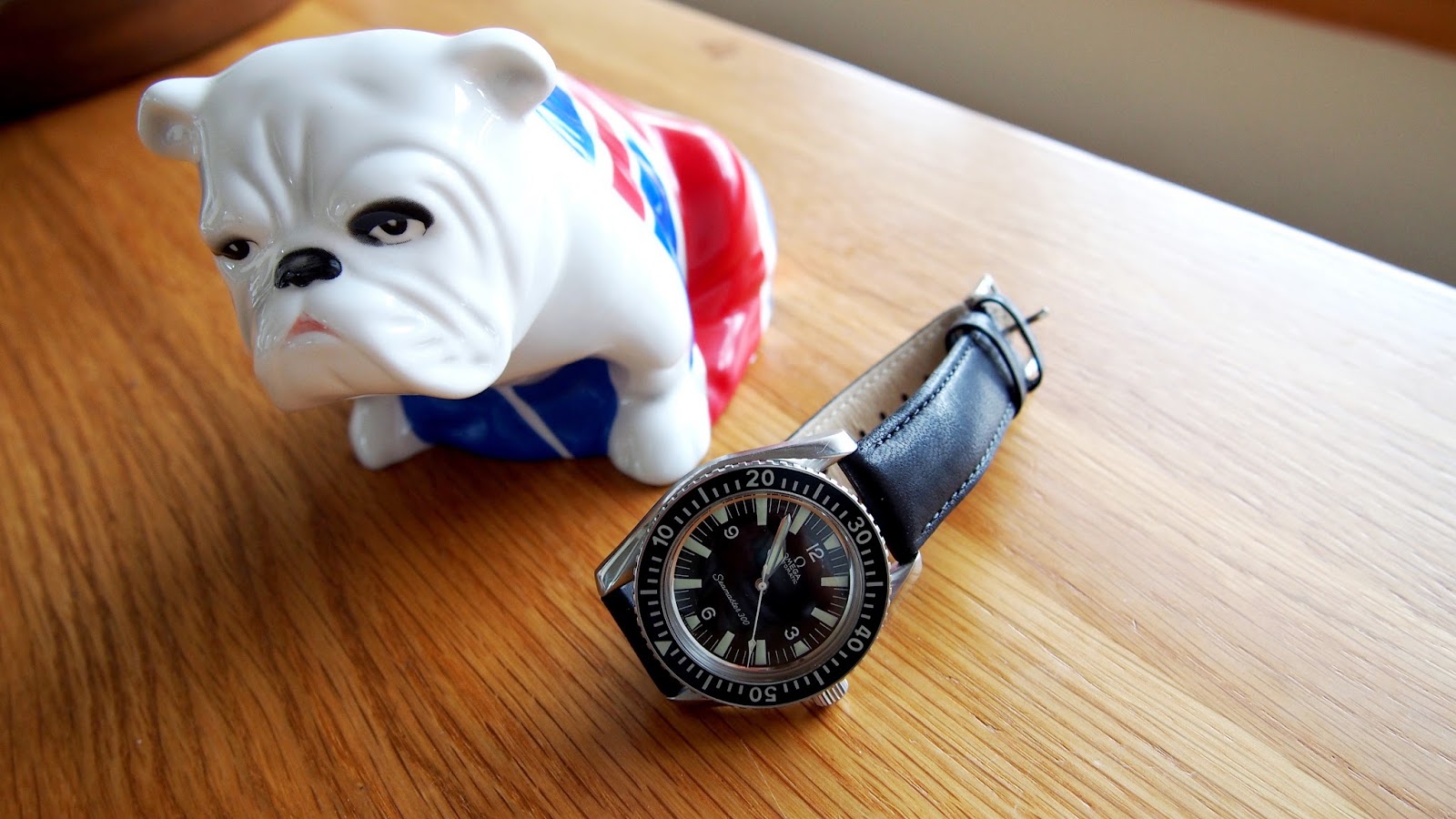 Anyway, that's another week done and dusted. Just got a call from my mechanic. Car's been serviced and it's ready to be collected. Then he said; "Did you know there was no oil in the engine?"

Man, I've been slacker than I thought!

Thanks for reading and have a great weekend, all!
Posted by teeritz at 17:11