Miracle (Needed) On Chapel St - We Gotta Save The Astor Theatre! 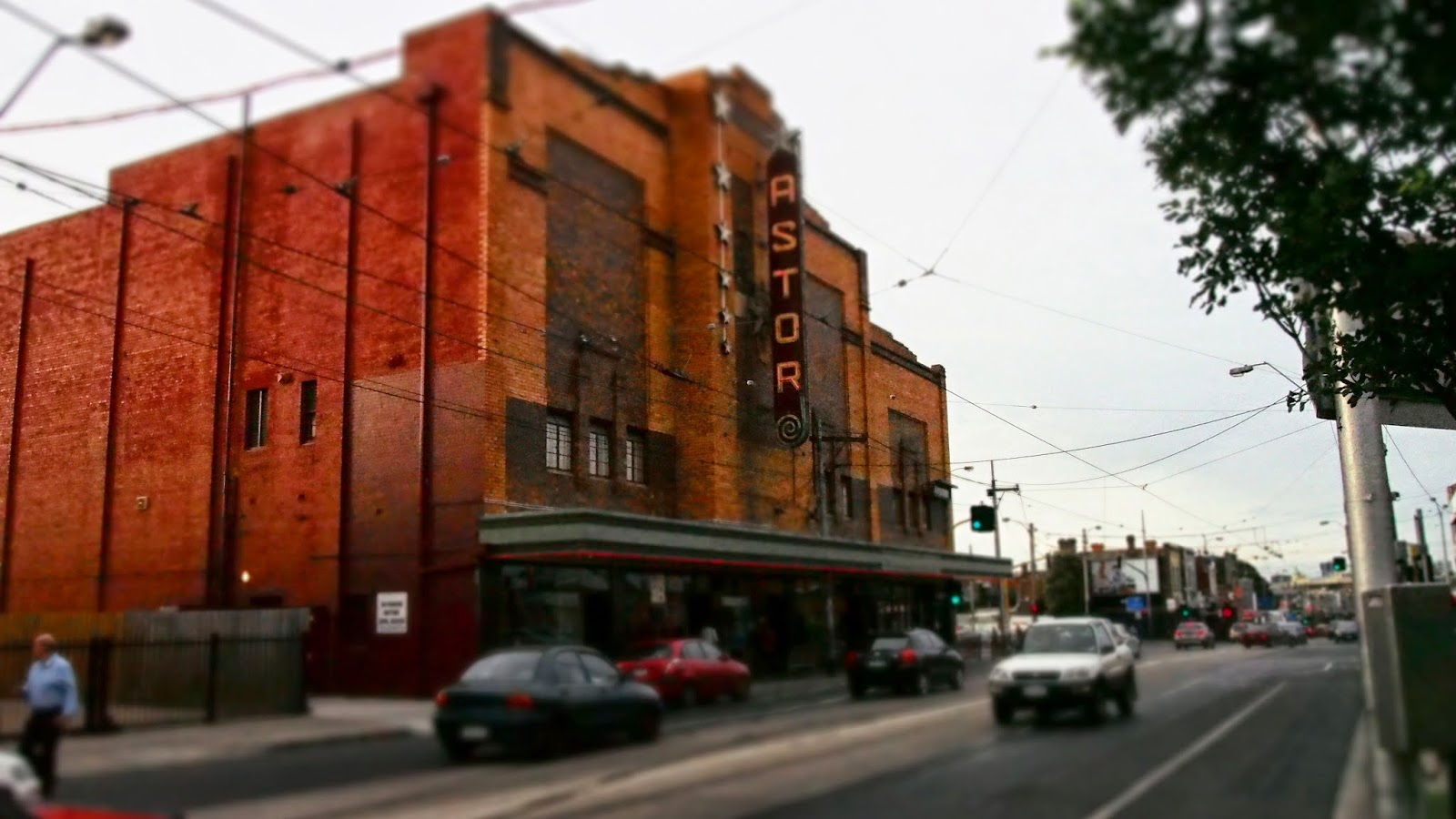 I've been going to The Astor Theatre for decades now. Admittedly, I haven't been there often, but whenever I did go, it was more than just a movie session. It was a step back in time, to an age when going to a movie palace was a big deal. I saw my fourth screening of Skyfall there about a year ago. I had, of course, already seen this Bond film at the multiplex cinemas near my house, but seeing it at The Astor was different. It was a more collective and shared experience. The audience laughed more at the humourous moments, they let out a collective "aahh", and a few of them applauded, when Bond's Aston Martin DB5 appeared on screen. And when the movie ended and the credits began to roll, the audience applauded.
This doesn't tend to happen at the suburban multiplex cinemas. In them, the movie ends, the credits roll and the audience makes a mad beeline for the exits, leaving the auditorium looking like a popcorn factory exploded. I'm always amazed at the litter to be seen after a movie. I actually think some folks buy two tubs of popcorn- one to eat during the movie, and one to spill onto the floor.
This doesn't tend to happen at The Astor. The audience seems a little more respectful.

Sadly, this cinema is due to close down in May 2015, when the current lease expires. The last movie will be a screening of Kubrick's 2001: A Space Odyssey (called it! I said to my wife yesterday; "I bet their last film will be a Kubrick.").
The landlords have other plans for this historic building. I'm betting that it will be turned into a block of apartments. 'Cos, you know, this town needs another block of apartments. I can see that I'm shifting into Sarcastic Teeritz as I write this. Bound to happen. The movie that I went to see yesterday was the late, great Billy Wilder's 1950 classic Sunset Boulevard. 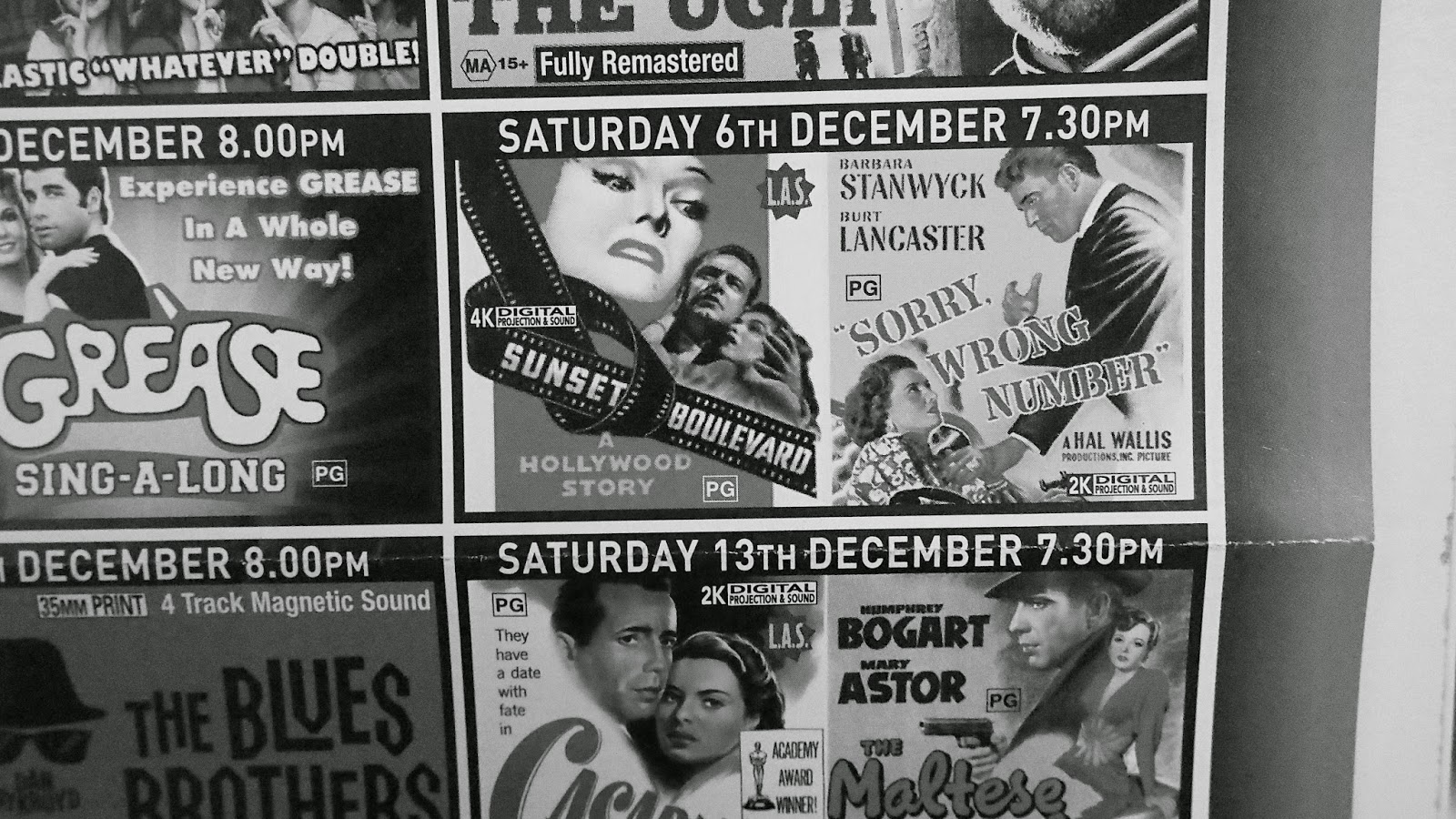 I had planned to go see next week's movie, Casablanca, which is only the greatest movie ever made, but alas, my daughter is performing in a dance concert on the same night. That's just how things go, sometimes, bub. Doesn't really matter, I suppose. Wilder's movie is perhaps more relevant. The story of a faded star from a bygone era looking for another chance at stardom and the jaded screenwriter who sees an opportunity for an easy gig and one last chance at saving his heavily tarnished soul if he can get past his own selfishness and self-loathing.
Yes, seeing this film made more sense. I was about to sit down in this grand old dame to watch a movie about a grand old dame. I have it on DVD and watched it about four months ago, but I wasn't going to miss the chance to see it on the big screen in this gorgeous Art Deco cinema that was built back in 1936.

Anyway, to get into a noir mood...

I parked my jalopy in a side street and made my way towards the cinema. It was a mild spring evening, the sun was still out and there was a little traffic on the road as people headed out on this Saturday night to engage in mischief or merriment or misery.
Or maybe all three. Some people are ambitious, after all.

I stepped into the foyer of the cinema. There was a short queue leading to the box-office. They guy standing in front of me wore an overcoat and newsboy cap. I began thinking I should have worn my fedora. May as well pretend it was 1936. Maybe next time. If there is a next time.

I reached the box-office, fifteen clams in my hand. The gal behind the glass wore a waistcoat and a pill-box hat, tilted at a slight angle, like a bell-hop from the Waldorf-Astoria. She smiled as I asked if it would be okay to take some pictures of the place.
She said it would be okay as long as I didn't snap any people. I wasn't planning to.
I headed up the stairs slowly, taking it all in. Things don't look good for this place. This could be one of the last times I do this, so I took my time. 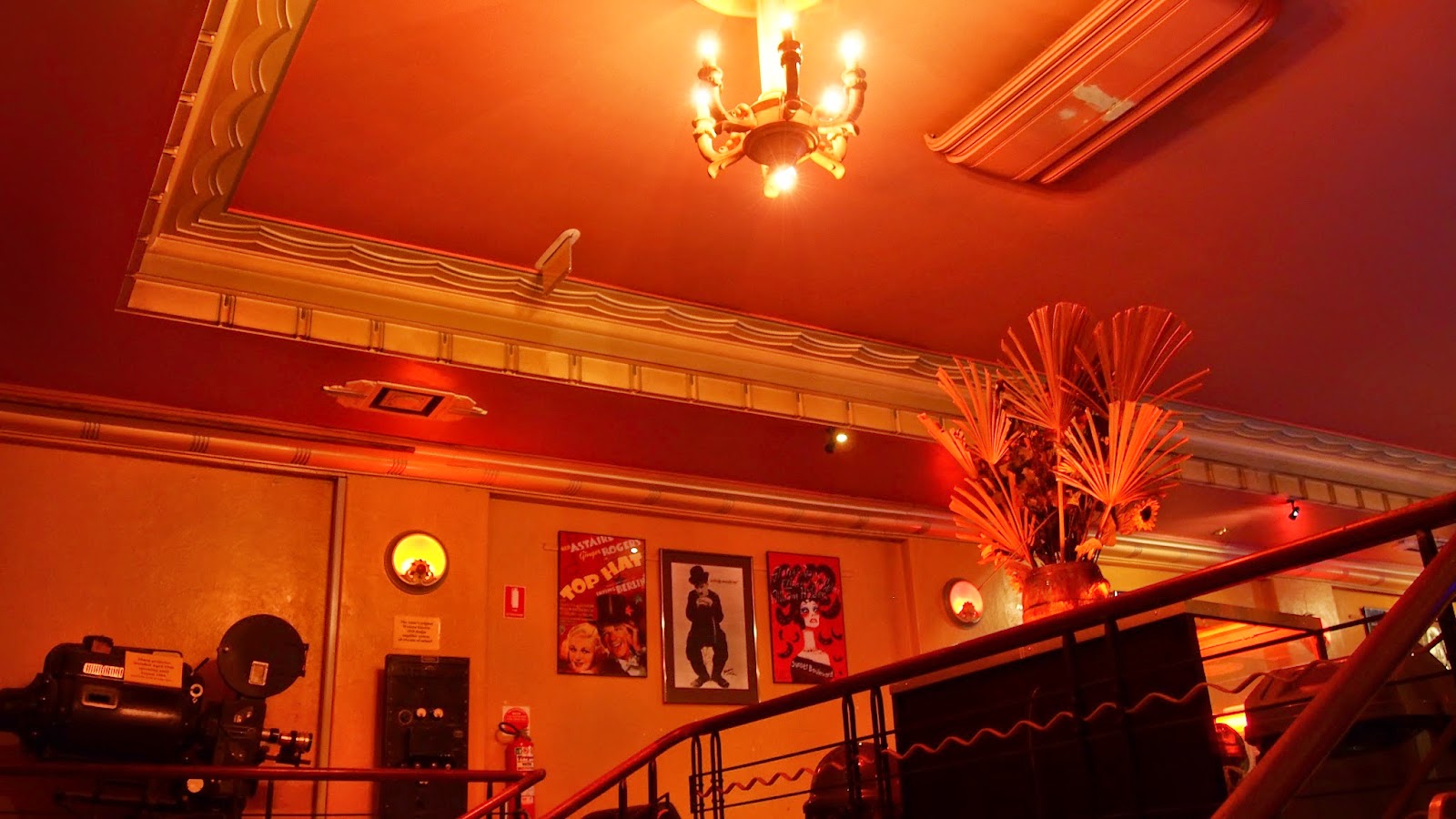 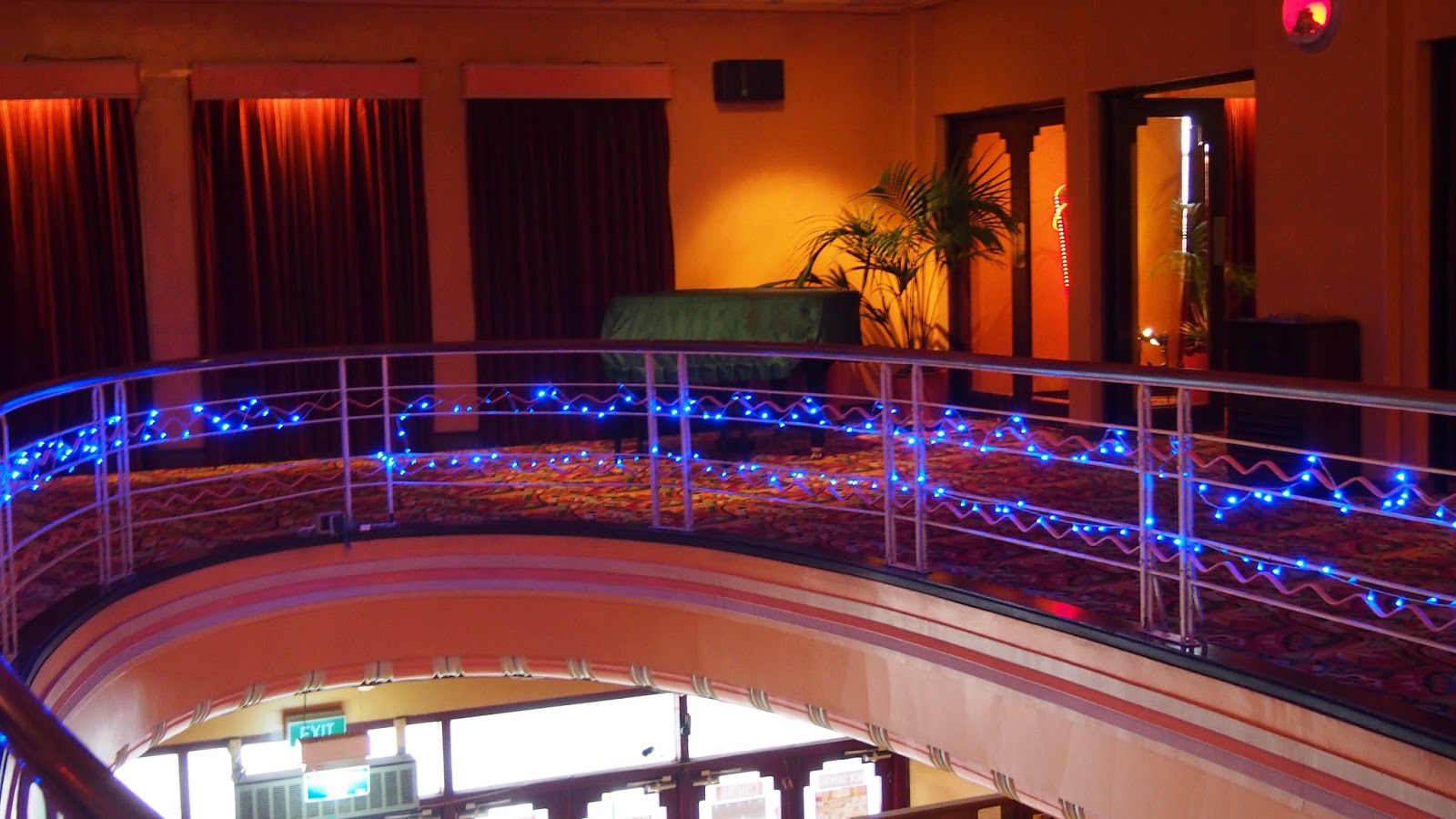 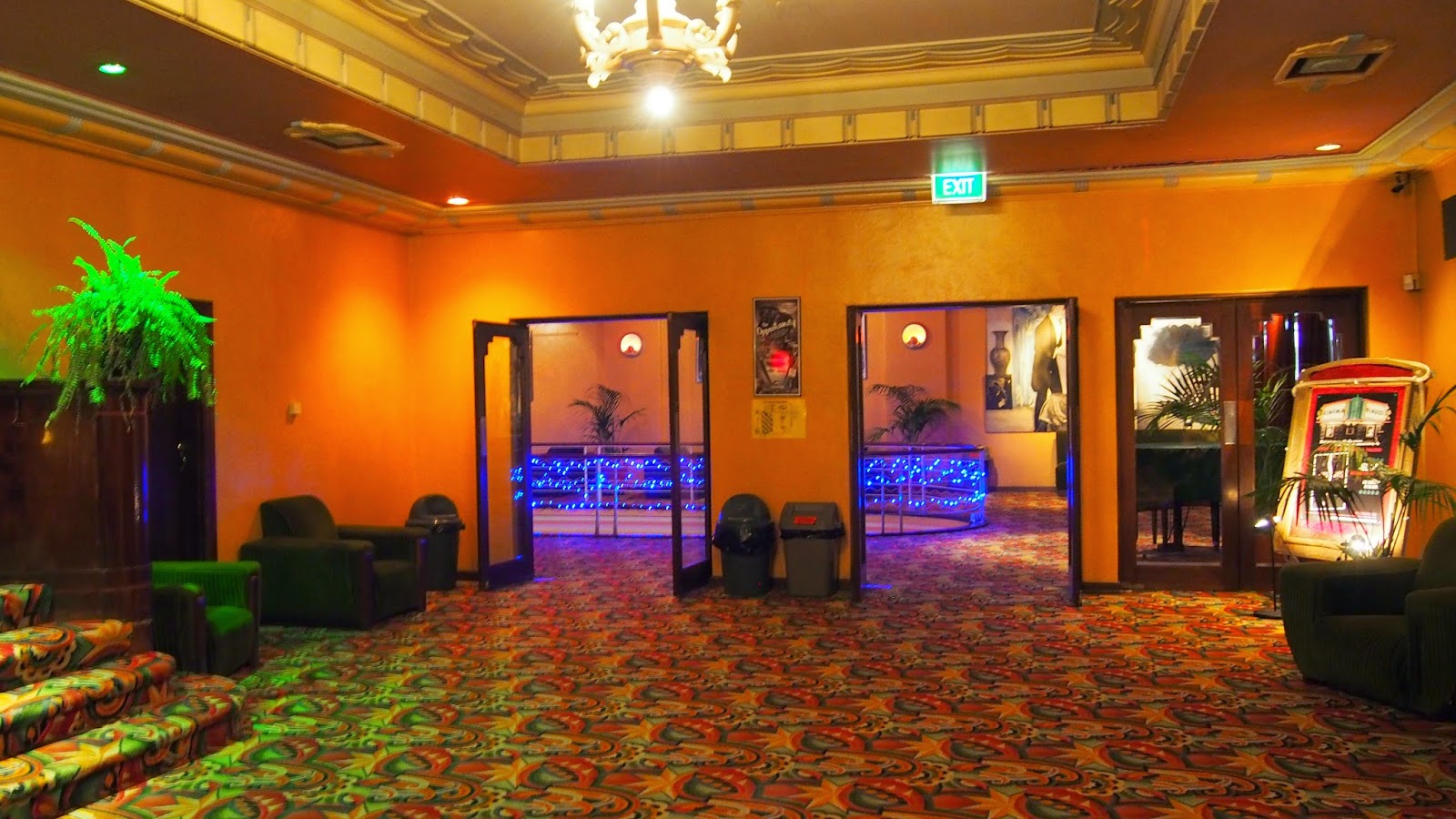 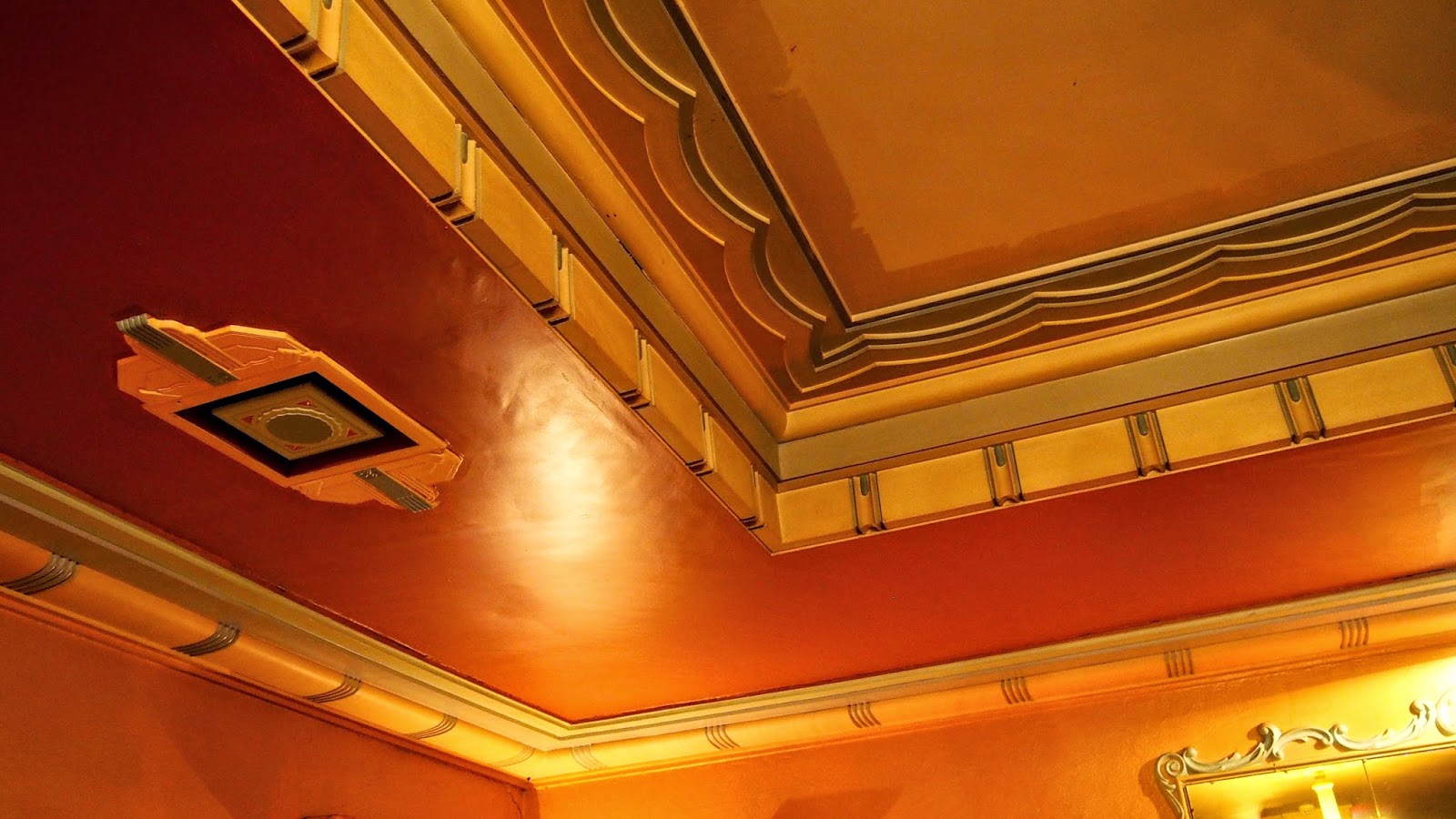 The place is nicely carved in the Art Deco style. Fine by me. I was half expecting Sylvia Sidney to walk in, park herself in an armchair, and light up a Fatima. Would'a been swell.
I gave my ticket to the usher. He gave me back half, and said; "Enjoy the film."
It'll be hard not to, I thought to myself as I made my way inside and parked my dogs three spots into an aisle near the back of the balcony. I took a look around. There was some paint missing on one section of wall, but the place was holding up nicely enough. Anyway, let's see how you run when you're 78 years old. 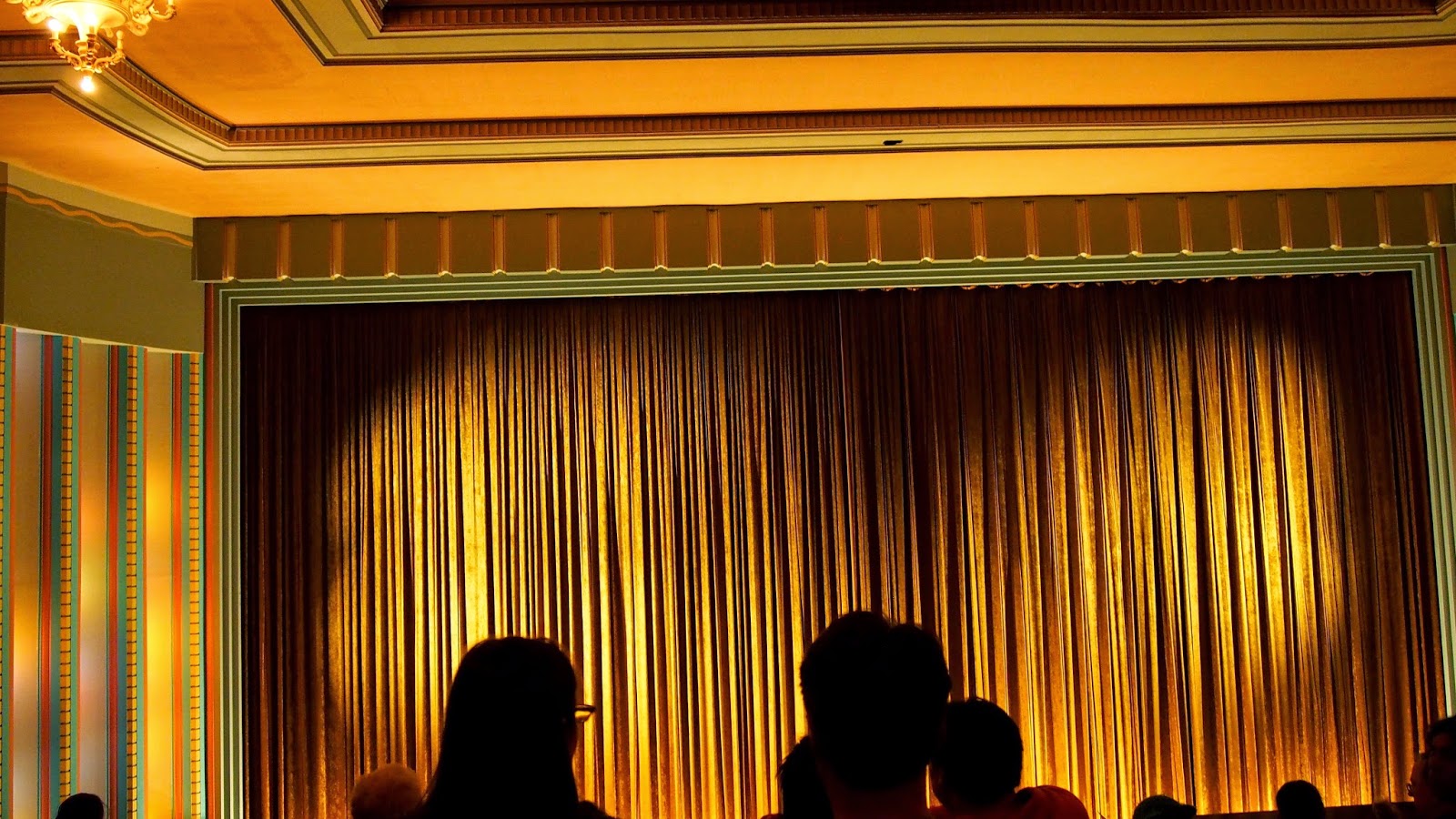 The lights soon went dim. They showed a trailer for next week's screening of "Casablanca", just to rub it in.

Pretty soon, the Paramount logo came up. So many stars. Franz Waxman's orchestration blared out of the speakers as this image filled the screen; 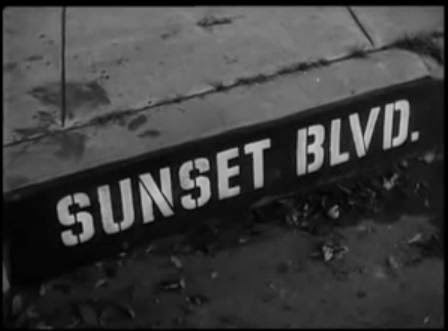 I settled a little deeper into my seat. I think a smile formed on my mug. I'm a sucker for noir with a voice-over. Gillis was about to be put through the ringer. Felt a strong urge for a cigarette, too. I quit the nails some time ago.
Just as well I wasn't watching "Casablanca".
Rick Blaine is a terrible enabler.

As the end credits rolled, the audience applauded, and I felt a lump in my throat. Might have been due to Gloria Swanson's brilliant performance as Norma Desmond or maybe it was the fact that we had all just shared this experience together. And we might never do so again.

There would be very few of us who have never seen a movie in a small, single-screen cinema such as The Astor. Which is why it's so important to try and save this place.
My cousin lived near The Progress Cinema in Coburg and we went to see a few movies there as kids back in the '70s. It closed down in 1998 and is now a dance studio.
There was a cinema in Sydney Road, Brunswick, where I saw a Bond double-bill back in '75. I became a Bond fan with a mad yearning for a Rolex Submariner shortly afterwards. Seen every Bond film a dozen times, read every Bond book two or three times. Still don't have the Rolex, though. That cinema closed down a long time ago.
The Carlton Moviehouse was in Faraday Street, just around the corner from a bistro where I worked. Last film I saw there was Rodriguez' Desperado, starring Anotnio Banderas. That cinema is now a student travel agency.
The Valhalla Cinema was a seven minute walk from my parent's house. I think I only ever went there twice when I lived at home. Funny how you never take advantage of a situation when it's presented right under your nose. They used to screen The Blues Brothers every Friday night, but you didn't go there to watch the movie. You went there to see the audience dressed in black suits and wearing RayBan sunglasses as they sang and danced along to the songs in the movie. The cinema even had its own police black & white like the ones featured in the extraordinary car chase from the film. It shut down for a while and re-opened as one of the Palace Cinema chains. It now shows current films.
Jake and Elwood Blues are but a nicotine-stained memory.
The Astor Theatre is perhaps the last of its kind in this fair city. Which is why it's so important to keep it alive.

There's a petition going over at change.org;

Save The Astor Theatre

It needs another 1,300 signatures. I'm not sure if it'll even help, but it's worth a try. I've already signed it. If you're reading this and you live a thousand miles away, you should still sign it. This cinema represents a piece of history. It represents a part of our lives that is being swallowed up by the allocated-seating, over-buttered popcorn, lousy-service-from-uncaring-teenagers, shopping-centre multiplexes that have sprung up in the last twenty years. I got no problem with modern cinemas. That's where you go to see The Avengers or the latest screen adaptation of a Jane Austen book. But there's only one place where you can go see Dr. Strangelove on a Monday, Gone Girl on a Wednesday, Blade Runner (The Final Cut) on a Friday, and Rear Window on a Saturday.
That's the Astor.
And this city needs the Astor more than it needs another apartment block.

I headed down the stairs towards the exit. That's when I remembered that Marzipan, the cinema's resident cat, had shuffled off her furry coil some time ago. I felt a twinge of regret. Still, she'd made it to the ripe old age of 21, and it was always amusing to see her curled up in one of the armchairs and people would sit elsewhere so's not to disturb her. She had clout.

I stepped out into the night. It was raining lightly as I made my way to where I'd parked my car. I turned to take one last look at the place. It looked grand. The neon sign did its little dance as I flicked on my camera and took a few more snaps. Those modern Japanese cars, with their moulded plastic fenders and remote-central locking, looked out of place on this particular corner. The streetcar coming down Chapel Street was from the wrong era, too. 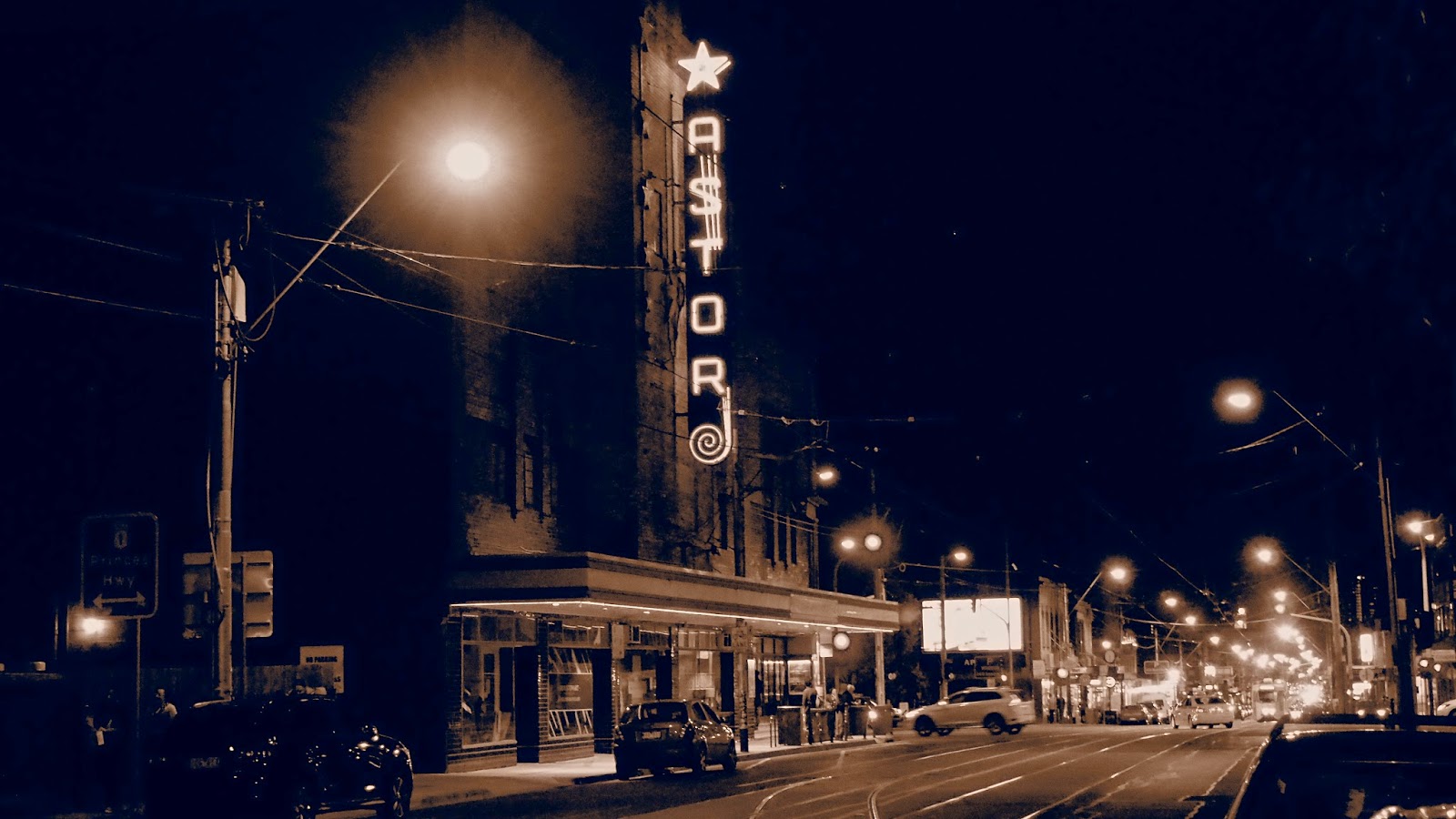 Thanks for reading, all.