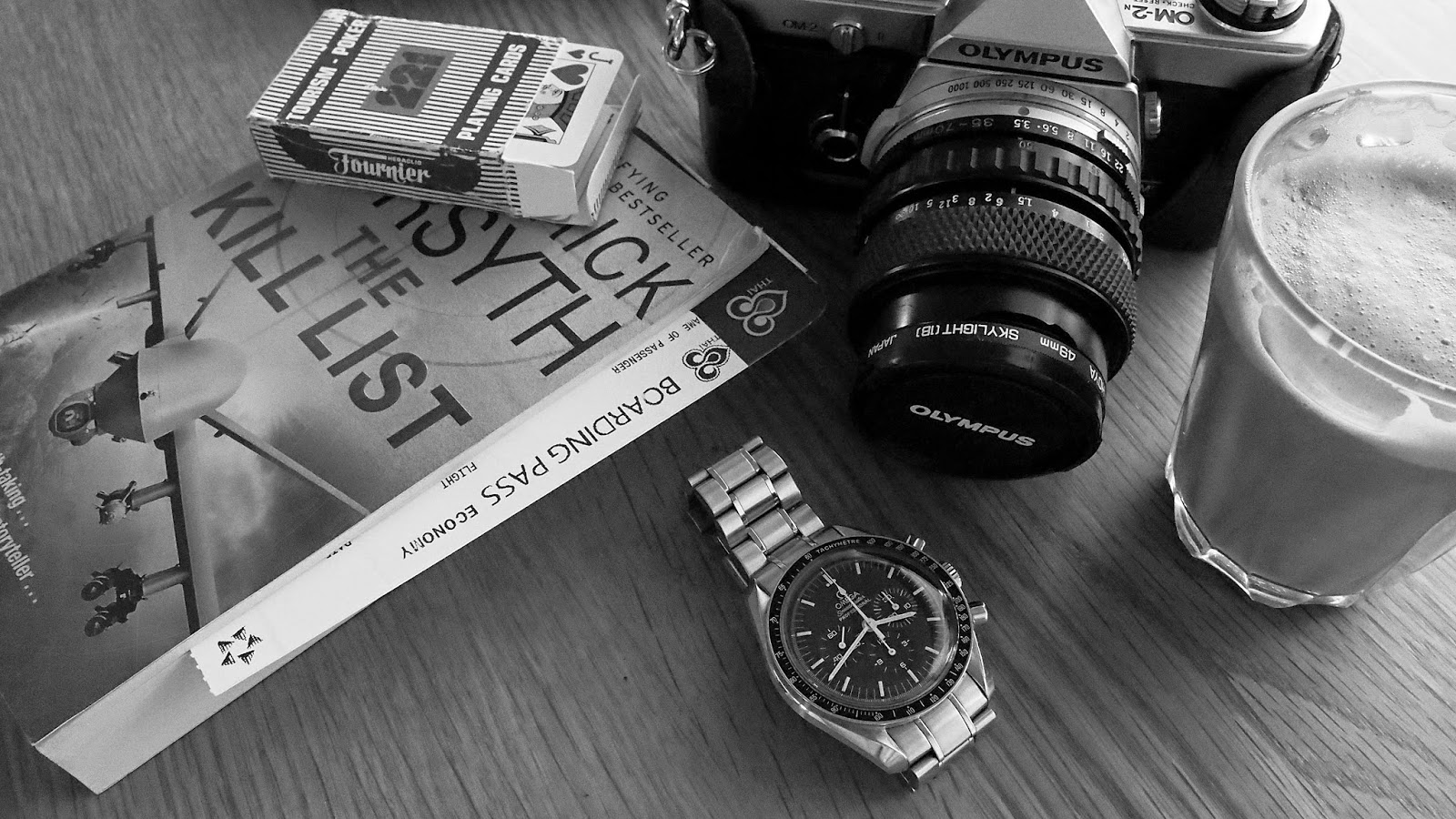 I'd been wearing the Omega Railmaster for over a week and figured it was time for a change. I also started reading Frederick Forsyth's latest book, The Kill List. I like Forsyth. I have quite a few of his books in paperback and I must say that he's always been good at painting a succinct portrait of the political landscape of the times in which his stories are set. He worked as a journalist before penning the classic The Day of The Jackal, a fictional account of a plot to assassinate French President Charles de Gaulle, set in the early 1960s. This book was published in 1971 and became a worldwide bestseller, spawning a great movie in 1973.
Forsyth's books have always been very well researched. It was in Jackal that I learned how to create a false passport, not that I ever put the method into practice, mind you, but this procedure was able to be done back in the years prior to the Digital Age. 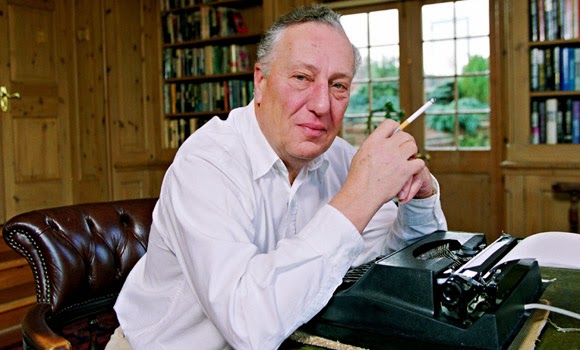 
Here's an article from 2008 that may be of interest. I'm including it here because I don't have time to read it right now and can't be bothered saving it to my hard drive;

I recall reading that Forsyth was planning to retire from writing after he'd written The Phantom of Manhattan in 1999, his sequel to the Gaston Leroux classic, The Phantom of the Opera. This book was a wild departure from the kind of thrillers Forsyth was known for, and he has since written five more thrillers. I just read that the film rights for The Kill List have been optioned. This makes sense when you consider Hollywood's renewed interest in the espionage genre. Aside from Bond 24 this time next year, we'll be getting another Mission Impossible, Bourne and Man from U.N.C.L.E film sometime in 2015, as well as a couple more adaptations of Le Carre books. It all sounds absolutely wonderful.

Continuing on with my Paul Newman mini film-fest, I caught up with The Verdict (Dir: Sidney Lumet, 1982). I saw this film at the cinemas when it was released and I think I saw it again on video sometime in the late '80s. 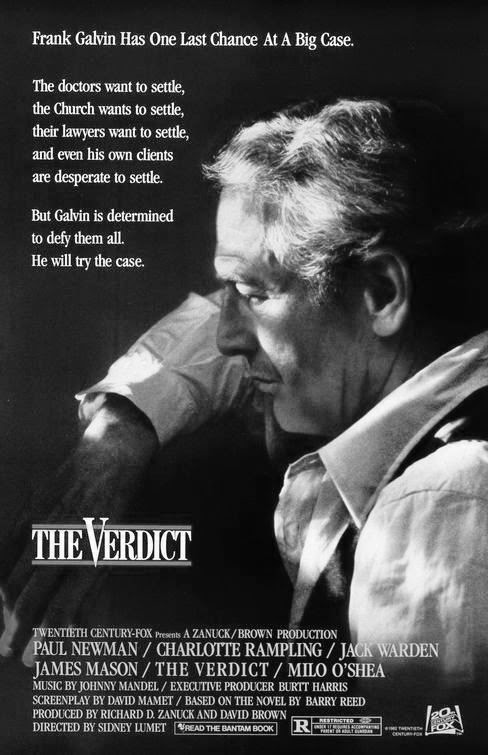 I have to say that it holds up very well. This has much to do with Newman's performance as Frank Galvin, a Boston lawyer who's on the skids and decides to take on an unwinnable case in a last-ditch effort to save himself and gain some redemption along the way.

The supporting cast includes the wonderful character actor Jack Warden, as Galvin's pal who assists him with the case, Charlotte Rampling as the love interest (I haven't seen much of her work, but Miss Rampling can do no wrong in my book. She takes a great photo too), and James Mason as the attorney from one of Boston's biggest law firms who is defending one of the city's largest hospitals in this malpratice trial.
Like I said last week, Newman won a Best Actor  Academy Award for his performance in Scorsese's The Color of Money a few years later, but his role in The Verdict is the one that he should have won for. Although, based on his films that I have seen, he should have gotten it for Cool Hand Luke in 1967. Still, after being nominated a staggering ten times throughout his career, I'm glad that he was finally rewarded for his efforts.

Monday
I removed the bracelet from the Speedmaster and put a grey NATO strap on it. Very Mission Control.

My DVD copy of Harper arrived! This is one of those films that I've read about over the years whenever I've read articles on either Paul Newman or screenwriter William Goldman. 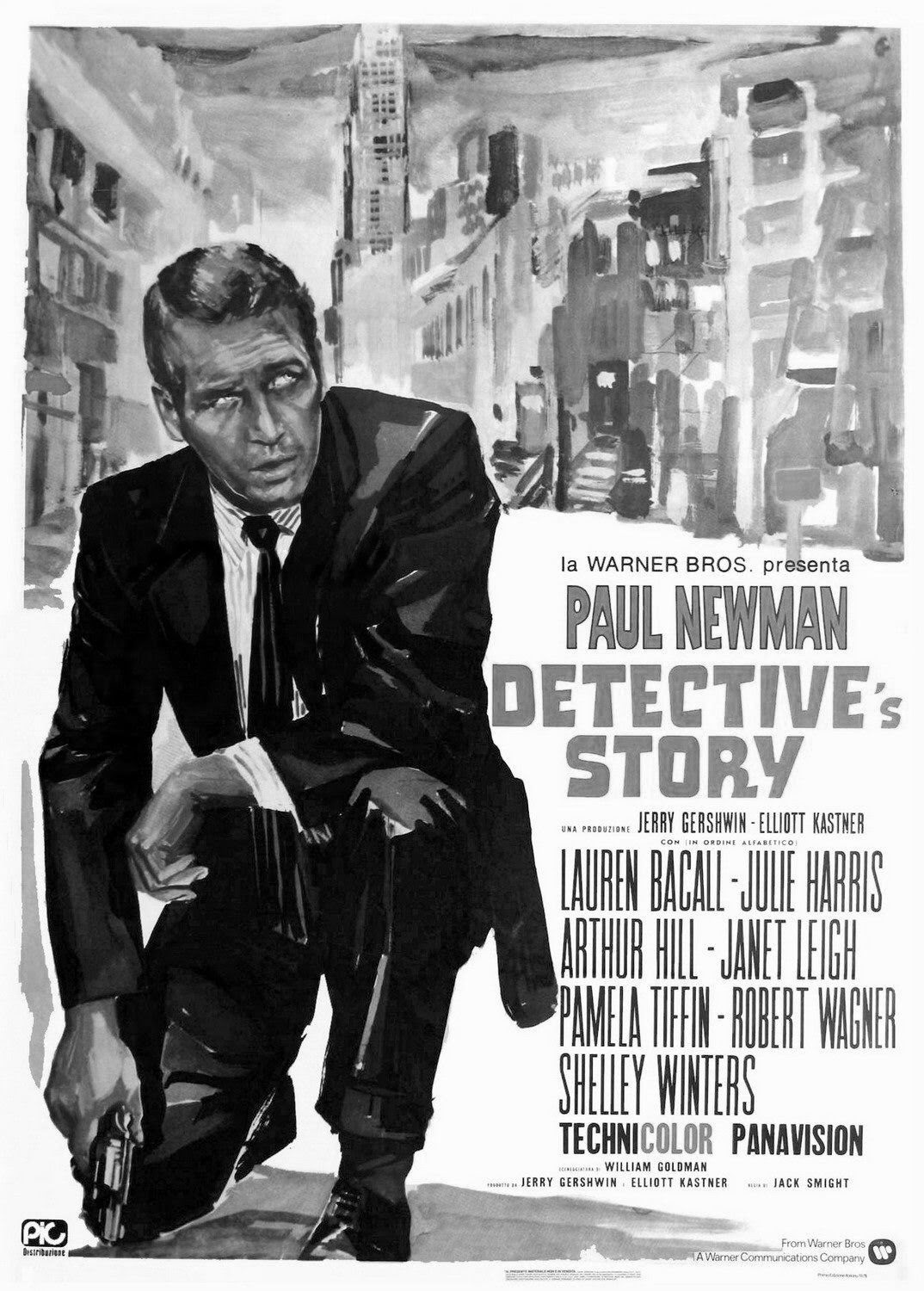 I think I'll need to watch it a couple more times, but after one viewing, I have to say that it's a big shame that Newman never made another three or four of these films throughout the '60s and '70s. Made in 1966, it's a perfect little time-capsule of the era as we see private detective Lew Harper take on a routine abduction/ransom investigation which soon finds him getting shot at and beaten up on a regular basis. The poster shown here on the right --> is the Italian version, complete with a change of title. The letter 'h' is pretty much silent in the Italian language and it's actually easier for them to pronounce 'Detective's Story' than it would be to pronounce 'Ar-pair', as they would have said it.
I must say I like the artwork on this Italian version of the poster. I chose to include this one because, while the US version is representative of the mid-Sixties, this painted artwork looks very atmospheric and manages to capture a little of Newman's world-weary portrayal of Lew Harper.
Google 'Harper poster' to see this artwork in colour.

Looking at this blog of mine last week, I was bugged by the fact that the post I wrote about the Dry Martini (April 2013) had clocked up over 80,000 views in six or eight months, but I couldn't find the traffic source for it. Hmmm. I somehow doubt that there were that many people interested in my Martini recipe. So, I reverted it to 'draft' in the hope of 'breaking the chain', so to speak. I re-posted it up a couple of days ago. Seems to have worked.

Tuesday
Went into the city to meet my brother at the offices of my watch buddy Mike. My bro has been wanting to get himself a decent watch for some time. He called me earlier that morning and told me that he'd gotten himself one of these a few weeks ago; 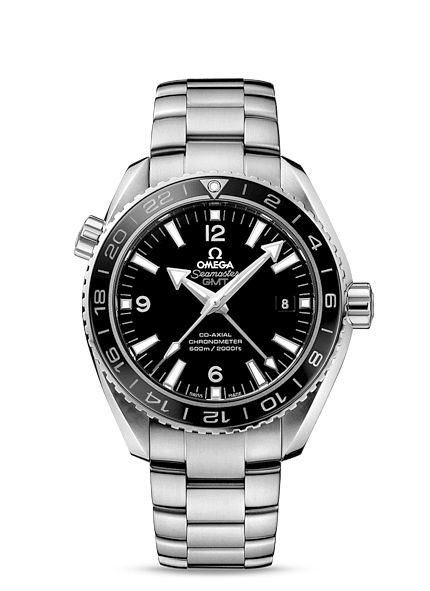 An Omega Seamaster Co-Axial Planet Ocean GMT. Nice. At 44mm in diameter, it's larger than I would wear on my wrist, but it suits him just fine. Of course, now, he may have been bitten by the watch bug. I told him he should perhaps consider something a little more dressy or corporate. Then he should just stay away from any more watches after that because that road leads to madness.
Before heading into town, I decided to pack light; 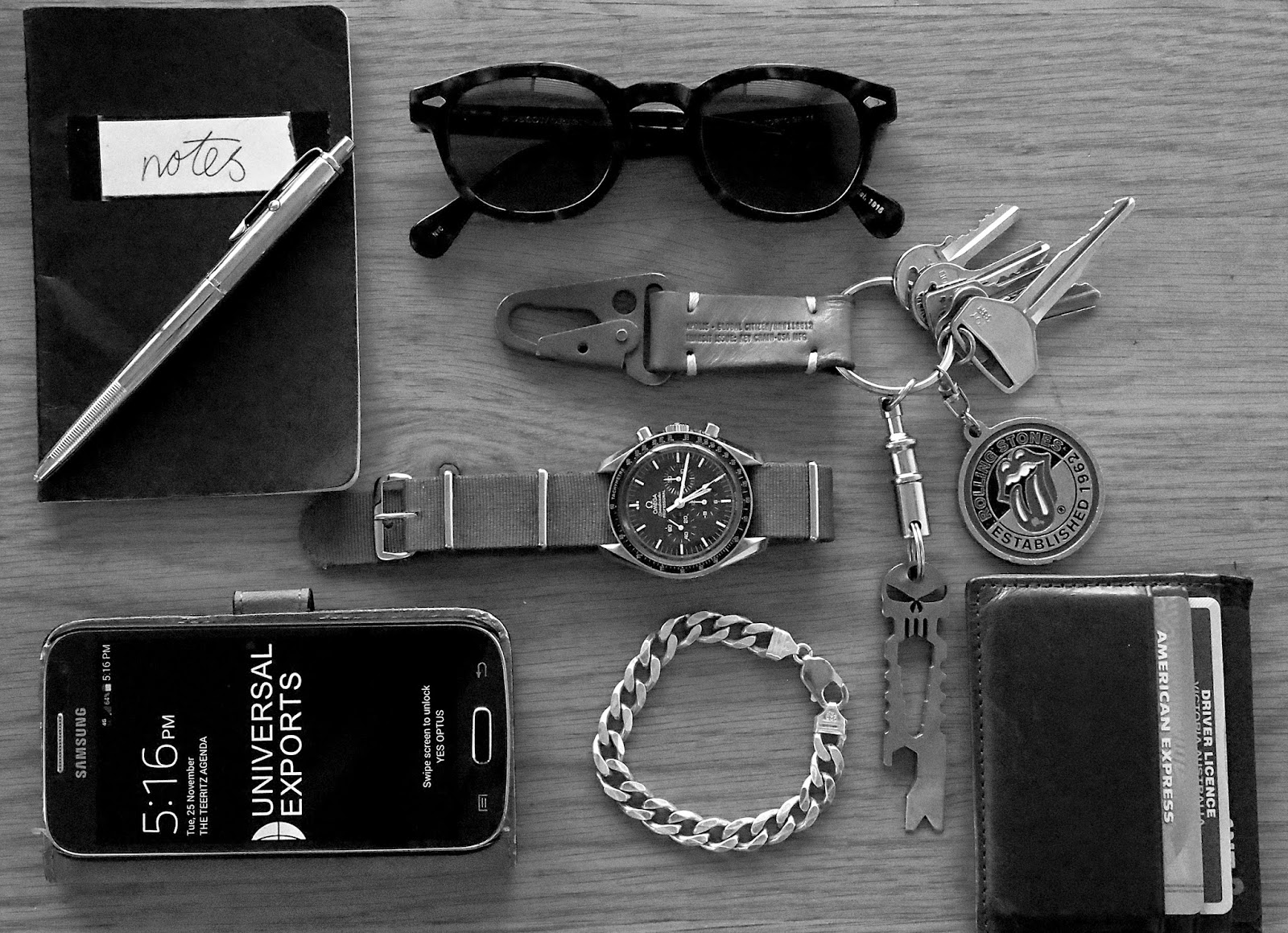 Wednesday
Finished my Conservation classes. Great. One more class (with a test) tomorrow morning and then that's it for this year! Then, two more subjects to do (hopefully early) next year and this course will then be complete. I cannot wait.

Today
Got the result for the test I did a couple of day's ago- 83%. Good enough. That's that subject done and out of the way. One last assignment for the Conservation subject, dealing with the effects of sunlight and moisture on various types of paper, and then I'm done for the year. Nothing else to do except re-enroll next month for the final two subjects of this course.

Very, very busy today. And it looks like there'll be much to get done around the house over the next couple of months. We're hoping to put it on the market early next year. Fun times ahead. Our daughter starts secondary school next year, so there are uniforms, books and other odds and ends to get organised in the meantime.
Yep, much to be done around here. Not exactly NASA proportions, but it's gonna feel that way to me. Especially with this on my wrist. Back on steel; 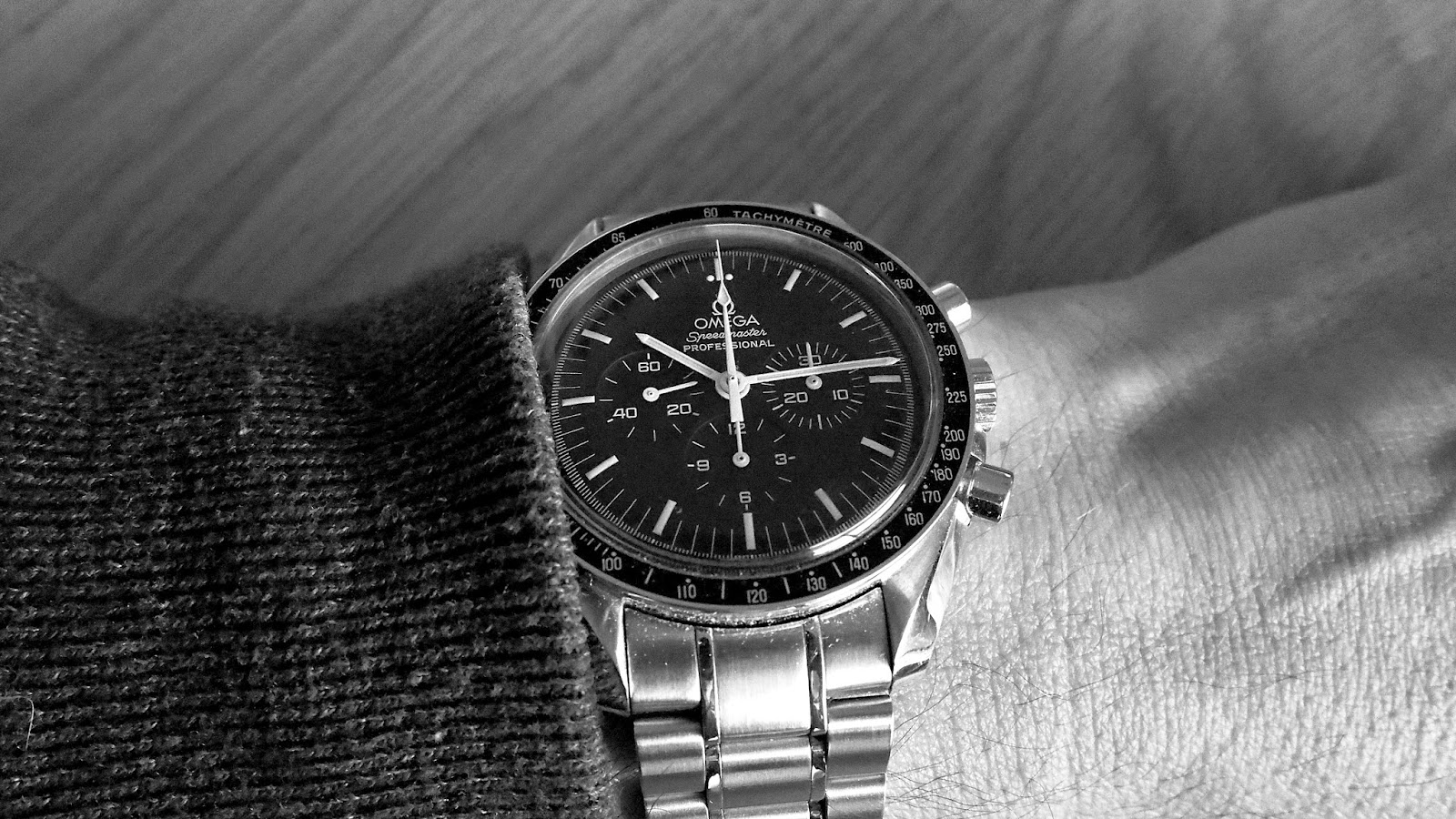 *thanks again to wikipedia.com for the finer details about Frederick Forsyth's literary output. You should consider donating a few bucks to wikipedia to keep it running. I did so when I realised how often I've referred to it in the past.
Posted by teeritz at 15:52