Friday 14/11/14 - New Wristwatch Forums, Back to the Caffettiera, Car Break-Ins & This Week's Wristwatches. 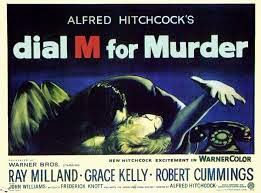 Sat down to watch Dial M for Murder (Dir: Alfred Hitchcock, 1954). Maybe I was a little too tired from the various things that I did earlier in the day, maybe it was the casting of Ray Milland and Robert Cummings in this film (they were both adequate actors, but I felt that a Hitchcock film deserved better leading men), or maybe it was something else. Either way, I  didn't find this film to be as enjoyable as the rest of Hitchcock's output of the 1950s. Sure, there were some tense moments in it, but overall, I found this film a little bland. I'm fairly certain it has more to do with how fatigued I felt rather than anything else, so I think I'll have to watch this film again one day to see if I end up with a higher opinion of it.

And for most of the weekend and early on in the week, I was wearing the Sinn 103 St Sa chronograph;

I still get a buzz out of this watch. Maybe it's because it was on my mind for about five or six years before I bought it. I think the current retail price is somewhere around $3,200.ooAUD and it puts vastly more expensive chronographs to shame. For example, here's a quick comparison. I bought my Sinn in 2009. At the time, you could have gone for the more basic model, the 103 St Ty, which looked like this;

This watch has a current retail price of about $3,885.ooAUD on a steel bracelet.
Here are the specifications: 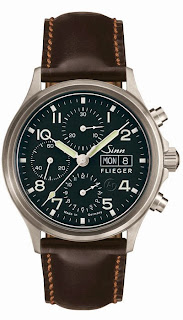 Now, take a very, similar watch, the IWC Pilot's Chrono , released around 2007, with a current retail price of $7,000.ooAUD on steel bracelet.
Here are the specs on this watch; 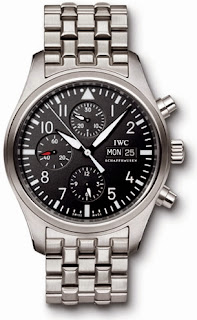 Okay, so this IWC watch has a little extra. The movement is more accurate and has been tested as such, and it's protected against magnetic interference. However, in real life, I find water resistance to be far more important than resistance to magnetic fields. And yes, the IWC is chronometer-rated, but the Sinn is no slouch when it comes to timekeeping accuracy, so I really can't accept the IWC's pricing. Those extras don't really justify a seven grand price-tag. IWC make some beautiful watches, but I feel that you're paying for the name with this particular model, when compared to the equivalent watch by Sinn.
Although, this IWC does have one thing going for it. Brad Pitt wore the previous model in one of my absolute favourite films, Mr & Mrs Smith (Dir: Doug Liman, 2005); 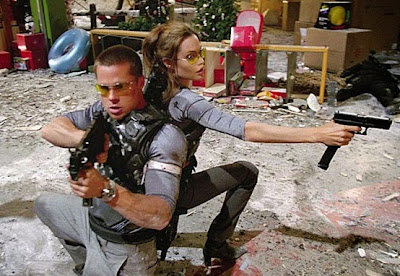 Monday
The coffee machine was due for another service, so off it went to the repairers. Time to bust out the caffettiera, the Bialetti Moka Express. It produces a thinner tasting cup of coffee which always takes me a little getting used to after the fuller flavour that you get from an espresso machine. Yes, it's a first-world problem. I do love these caffettieras. There were about six of these, in various sizes, in my house growing up. This one above is the six-cup model. I think I have two others, but they're packed away.
I switched to the Omega Railmaster. Sometimes, simpler coffee requires a simpler wristwatch; 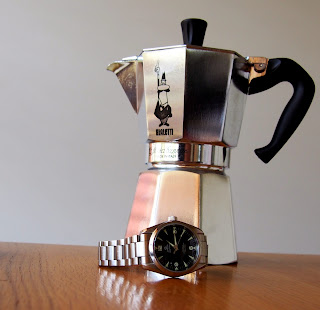 Tuesday
Found a new wristwatch forum. I was actually told about it by another watch collector and I decided I'd join up.
It's called the International Watch League and it looks like it'll be a nice place to visit. And here's the link;

Somebody knocked on our door this morning at around 5:20am. That's never good news. I opened the door, bleary-eyed, to find a policeman shining a torch at me. He apologised for waking us and then informed us that our cars had been broken into. There was nothing of value in our cars, but this little bastard took my Swiss Army knife.
The police officer told us somebody in the next street heard his car getting messed with and he got into a scuffle with the perp who ended up getting away...on a bicycle. The general consensus is that it's some kid in the neighbourhood.
Man, the weasel took my Army Knife. This time, it's personal.

I got a call around 8:00am from an officer who told me that she would be coming around with a forensics kit to see if they could lift some prints off my car. If the thief has a record, then his fingerprints will be on their database. Tell ya what, the fingerprint powder that they use is a dog to wash off.
Her colleague went and spoke to a couple of neighbours while she worked on my car. Because it's paintwork is so old, she wasn't sure if she'd be able to get any useable prints. 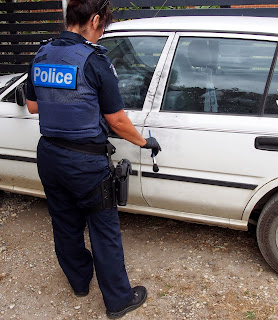 I like cops. Got a lot of respect for them. It's not an easy job, the paperwork is never-ending, and the hours are murder. 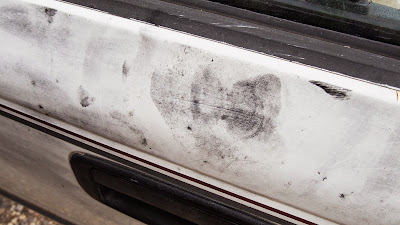 Have you seen this man? A couple of decent prints. Probably mine, ha, ha!

Anyway, have yourselves a great weekend and thanks for reading!

One last pic, jazzed up a little, courtesy of the iPhoto app. 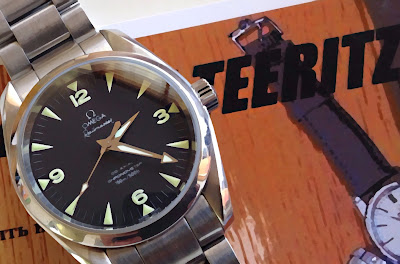