I've been on a bit of a Paul Newman kick lately. 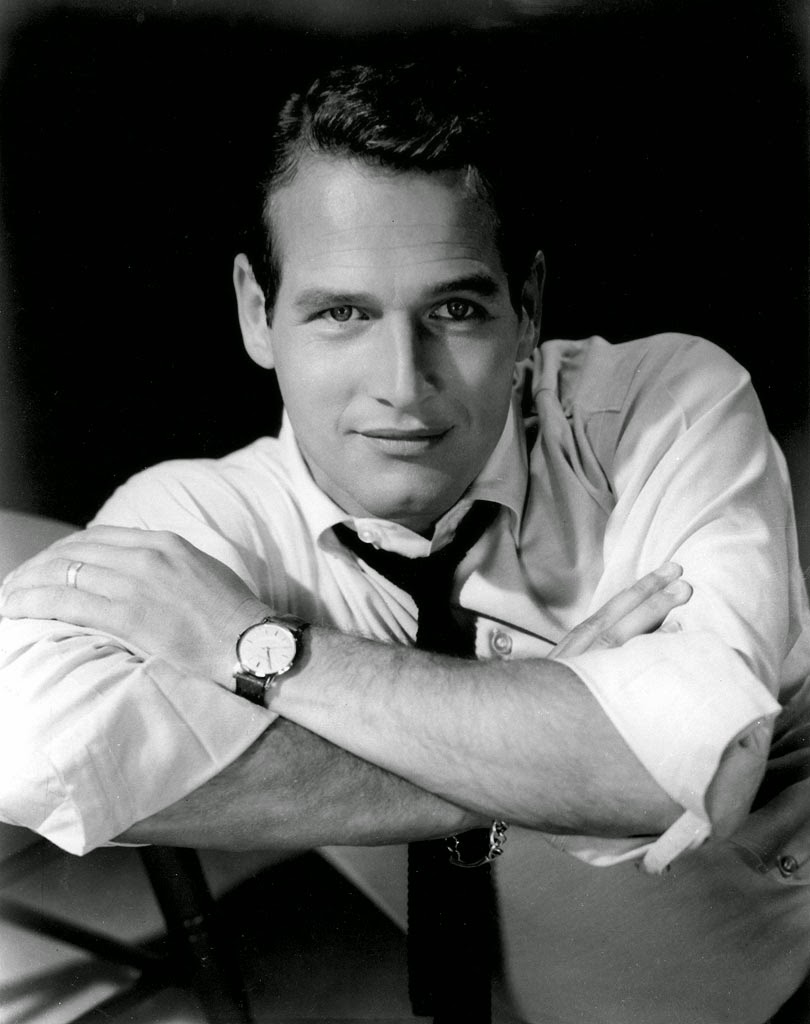 I've always liked him as an actor. He had a great and likeable presence on-screen, although I'm ashamed to admit that, despite his long and prolific career, I've probably seen only about ten or fifteen of his films; 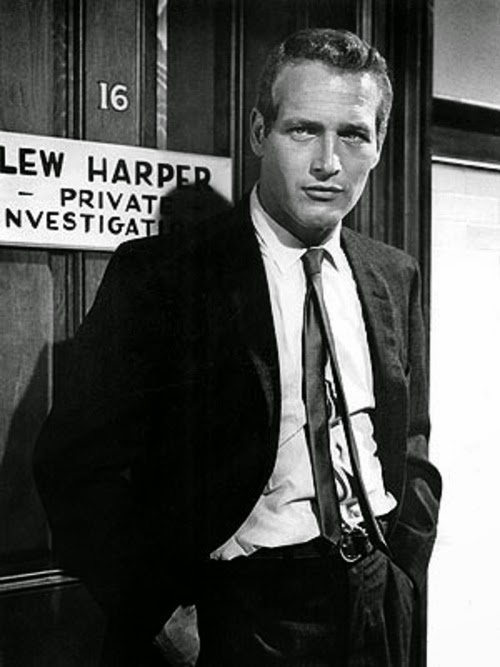 Okay, make that thirteen. That's cool. Means I've got a lot of his films to still look forward to. As great as he was an actor, he was perhaps greater as a humanitarian. He and his buddy A.E. Hotchner founded the Newman's Own salad dressing venture back in 1982. All proceeds, after taxes, were to go to charity. To date, this company has raised over 380 million dollars.

I managed to track down a copy of his 1975 film, The Drowning Pool, where he reprised his role as SoCal private detective Lew Harper from the 1966 movie entitled Harper. This character, often regarded as the successor to Chandler's Philip Marlowe, appeared in a large number of books by Ross McDonald, although he's named Lew Archer in the novels.
I recall the TV ads for The Drowning Pool from back in the Seventies. From memory, the film didn't do too well when it was released, but I have to say it was actually a pretty good film. The supporting cast was great, except for Melanie Griffith, in one of her earliest screen roles here, the music was jaunty in places, and the screenplay was good. I haven't seen Harper, but I seem to recall certain scenes from it. Might have something to do with my having read Adventures in the Screen Trade, by William Goldman, the screenwriter who adapted Ross McDonald's first Archer book, The Moving Target, into the screenplay for Harper. At any rate, I'm awaiting a copy of Harper and it'll be interesting to see. 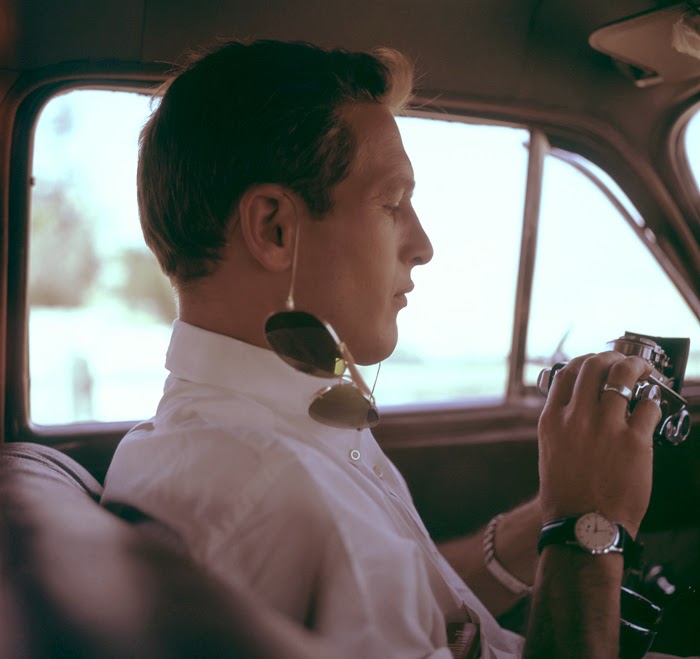 My wife is a big fan of Newman's 1973 classic, The Sting (Dir: George Roy Hill), which reunited him with his co-star from Butch Cassidy and The Sundance Kid (Dir: Hill again), Robert Redford. Whenever we watch The Sting, and Newman appears on-screen, my wife will remark; 'Gee, he was a beautiful man.'
I'm, of course, in no position to argue.
Newman aged well throughout the Sixties, Seventies and Eighties. Rumour has it that the trick he employs at the beginning of The Sting, whereby he fills a basin with two trays of ice and cold water before dunking his face in it for thirty seconds or so, was something that he did in real life and this is what kept him looking younger than his years. I don't know about that, but he certainly held up well in his time. 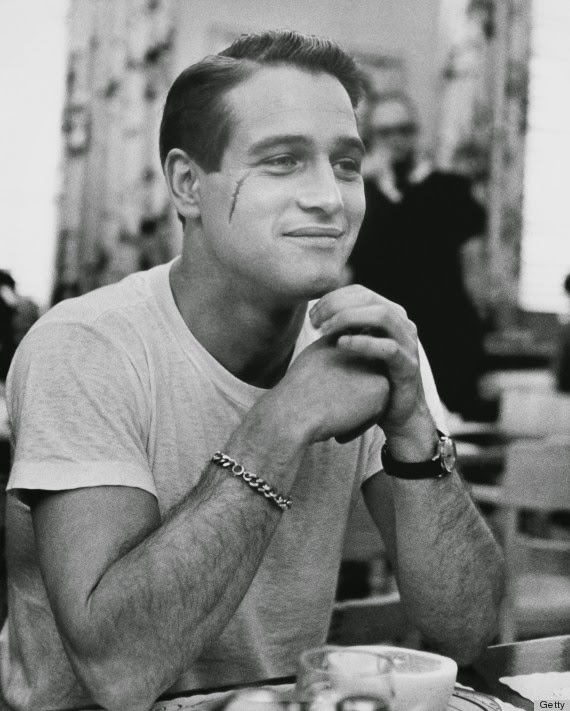 Aside from waiting for the Harper DVD, I've also been on the lookout for Ross McDonald's Archer novels. I have to say these are proving virtually impossible to find in second-hand bookstores. Back in the '90s, I used to see them everywhere, both new and used, nestled on store shelves between the John D. McDonalds (he wrote the Travis McGee crime books) and Ngaio Marsh's mystery novels.
I can get a lot of the Archer stories off eBay, but I don't relish paying twenty-five bucks for them right now. Might have to check out Amazon.

I remember going to the cinema in 1982 to see The Verdict (Dir: Sidney Lumet) in which Newman plays a very-close-to-washed-up ambulance-chasing Boston lawyer named Frank Galvin, who has one last shot at redemption when he takes on a medical malpractice case and goes up against James Mason's character, who's a partner in the largest law firm in the city. It's a brilliant performance that Newman gives, and it definitely should have snagged him the Best Actor Oscar that year. Ben Kingsley got it for his title role in Gandhi, a performance that had many older Indians believing that their spiritual leader had come back to life.
Newman finally received the golden statuette for his return as 'Fast' Eddie Felson (his character from The Hustler- Dir: Robert Rossen, 1961) in Scosese's The Color of Money in 1986, opposite Tom Cruise. It was another great performance, but The Verdict was more of an actor's role.
There were a great many actors of Newman's generation who are all well-regarded. Redford, Steve McQueen, Dustin Hoffman, James Caan, Gene Hackman, Robert DeNiro and Clint Eastwood were all quite prolific throughout the Seventies and Eighties, but I have to hand it to Newman for all that he did outside of his acting gigs.
Newman was married to actress Joanne Woodward for fifty years, a rare feat in Hollywood marriages, and they had five daughters and one son, who died of a drug overdose in 1978.
He died in 2008 of lung cancer at the age of 83, leaving behind Woodward and the girls, a great body of  work on film, and a wide range of philanthropic endeavours that made life easier for a great deal of people.

It's been a busy week. I have two or three more assignments to complete and I plan to get them done over the next week. One test to do in-class next Thursday and then that's it for the year. Two more subjects to complete, hopefully in the first quarter of next year, and then this course is finished!

Monday's watch, the Omega Railmaster. Been getting a lot of wear out of this one lately; 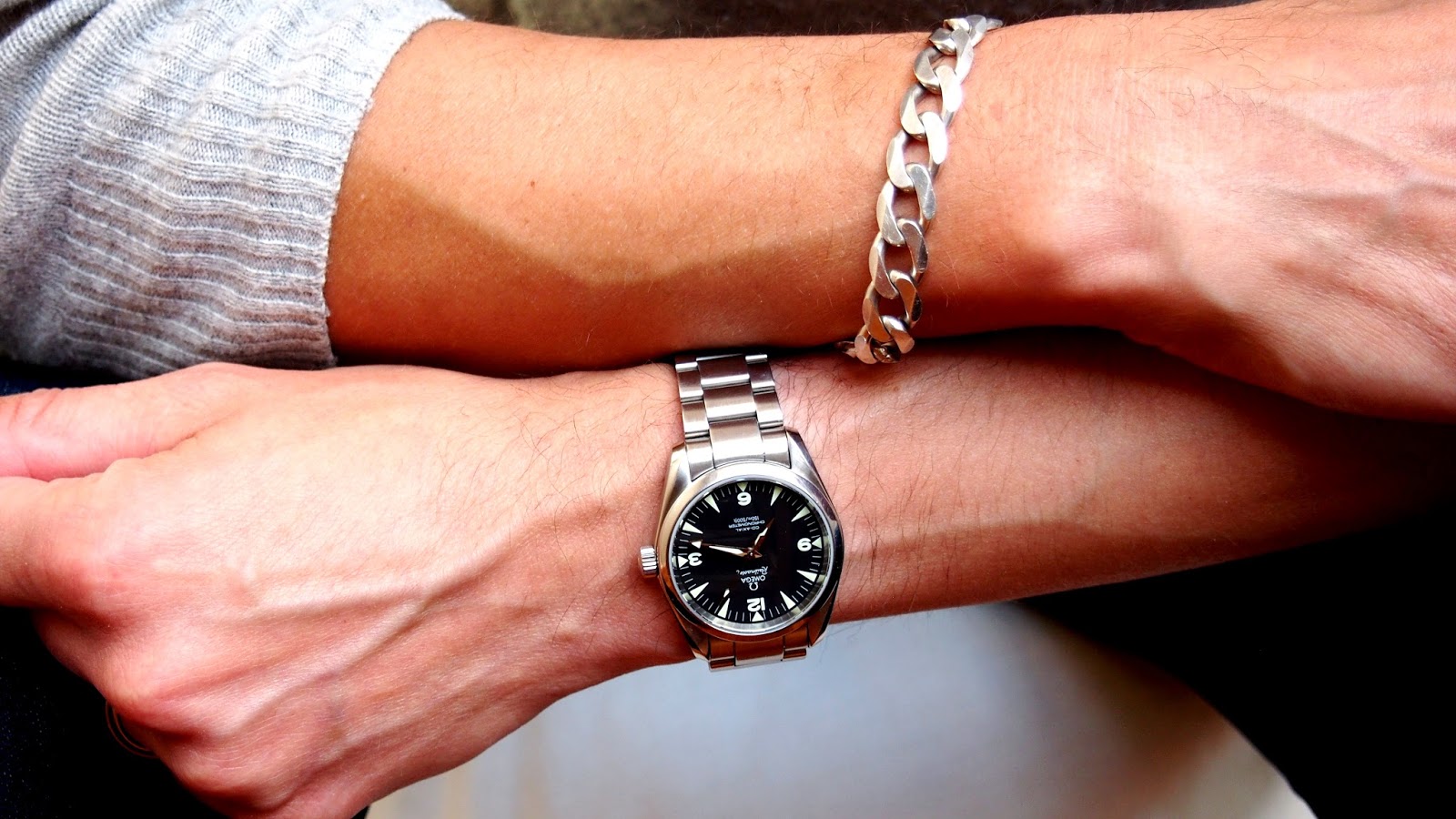 When I worked briefly at a local jewellery store a couple of years ago, I began taking notice of silver bracelets, thinking that perhaps I'd like to get myself one. I recall mentioning this to my wife.
Her response? "And who will you be married to? You'll look like a Chock."  (a Guido)
I told her that Chocks wear gold bracelets. Big chunky ones. I wanted something a little more understated. Looking at all these pics of Paul Newman lately and I decided to get on eBay and see what they had. Sure enough, fifty-eight bucks later and here it is. A sterling silver Cuban curb-link bracelet.

This morning. You know, I forgot I had this t-shirt; 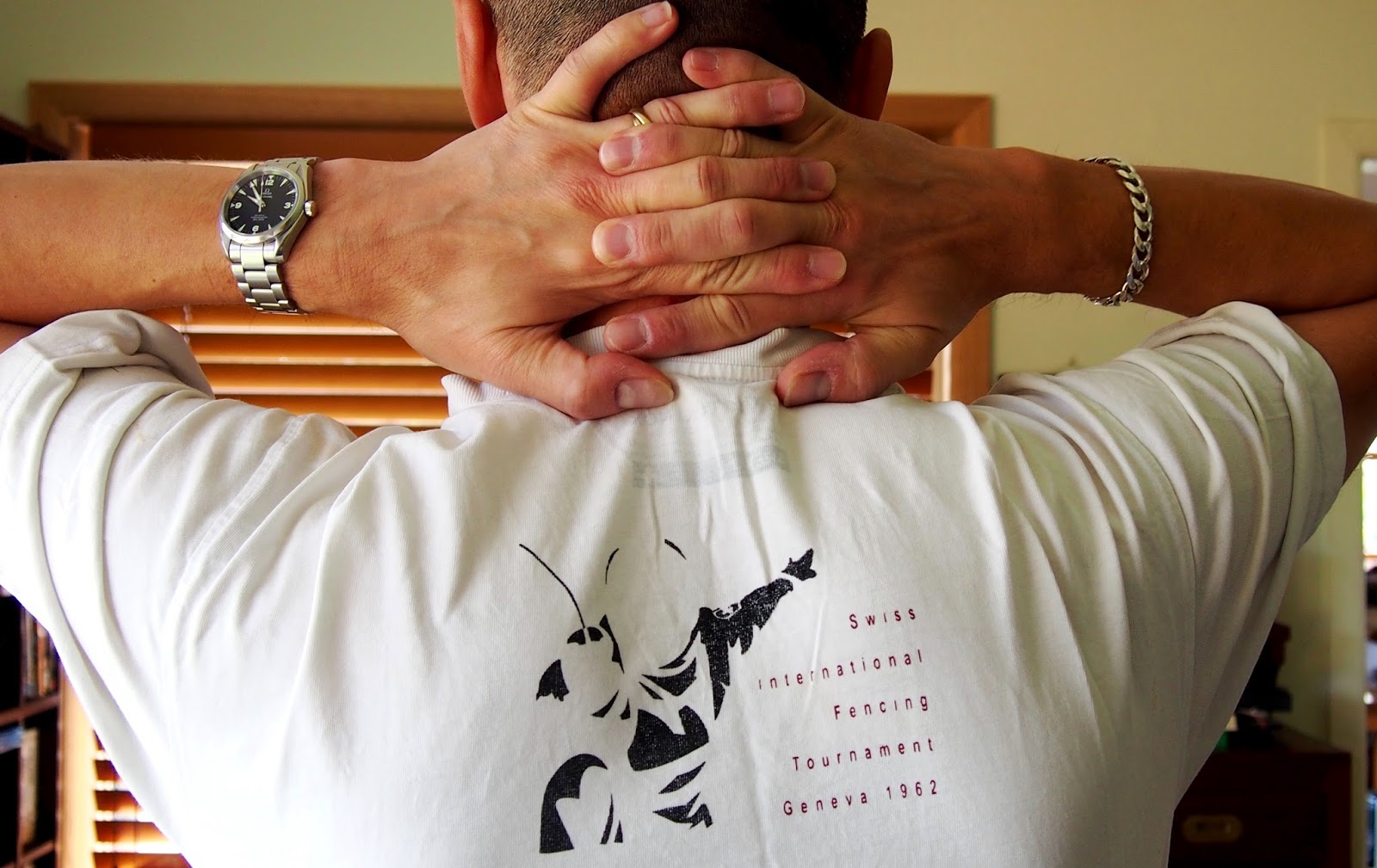 This afternoon, changed over to the Seiko 7002 to do some housework; 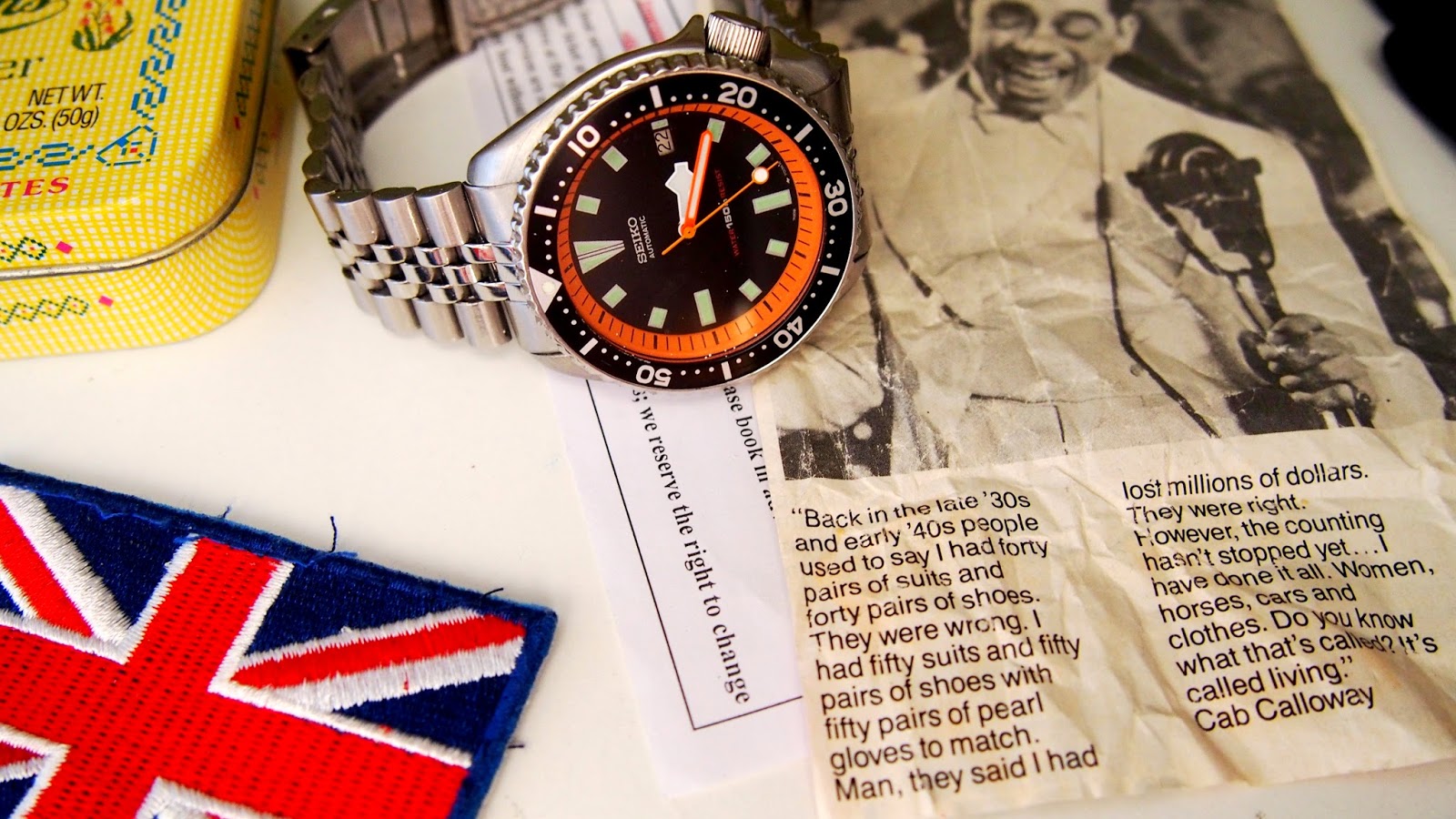 Right, it's late Friday afternoon, the sun is shining, I got a few major household things out of the way and I could use a drink. 'Scuse me for a second.

Okay, that's better. Gin & tonic with a few slices of cucumber. Makes a difference, I can tell you. Railmaster back on the wrist. Cheers;


Special thanks once again to wikipedia for the info on Paul Newman. I knew a bit of it, but this great website is fantastic for filling in the blanks and details. It even has an entry about 'Guido'! Nothing on the term 'Chock', which I'm sure was coined by myself and a few friends back in the Eighties to signify the type of young Italian guy that we didn't want to be. - Ciao!