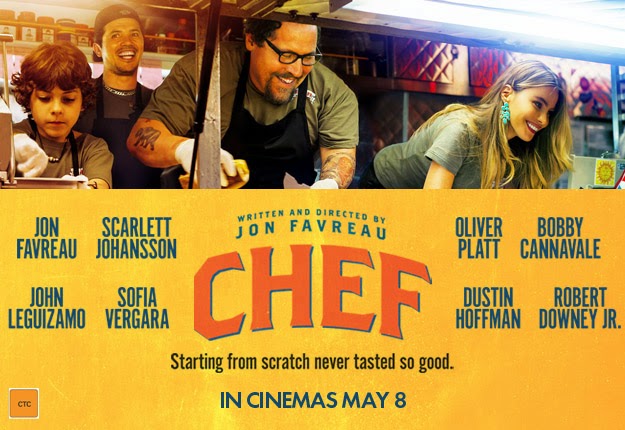 My wife and I sat down to watch Chef (Dir: Jon Favreau, 2013) on Sunday. I have to say, it didn't quite set my world on fire. There were just a couple of scenes here and there that didn't seem to flow on from the scenes before them, and one or two bits that seemed to run a little longer than they should have. It almost felt as though all Three Acts of the screenplay came from three different drafts.
Or maybe, the film got cut differently in the editing room to how Favreau wanted it.
I will say, however, I got a lot of time for John Favreau. In this film, his character, Carl Casper, is pretty spot-on. I've worked with chefs like that.
And, as a director, he did sterling work with the first two Ironman films, and I was surprised when he wasn't offered the third one, which I consider the weakest of the three. Shane Black is an action film bad-ass, without a doubt (the Patron Saint of action film screenwriters. I consider The Long Kiss Goodnight a classic), but Ironman 3 just had too much of a Shane Black stamp on it, with it's Christmas carols and shipyards at night. Although, the aeroplane-passengers-with-no-parachutes scene is brilliant and quite moving and his screenplay for the film was very clever. It just seemed, in some ways, like a departure from the first two installments.

Oh yeah, Jon Favreau. He does a great job directing Chef and the supporting cast is great. There are a few scenes with Favreau and his sous chefs, played by the wonderful John Leguizamo and the impressive Bobby Cannavale (whom I recall from an episode of Sex And The City years ago) and my wife turned to me and said; Gee, they swear a lot.
Yes. Yes they do. I've worked in some kitchens that would make a frat boy blush. It was eff this, eff that, eff you!
And there's a scene where Favreau takes his son to a movie in an effort to bond with him a little. We get a quick shot of them sitting in the audience, munching on popcorn and we hear the unmistakeable sound of Ironman's palm laser being fired. I mention this because my son thought I should include it in this post.
'Cos it's important to take your kid's suggestions sometimes.

I was wearing the WatchCo Omega Seamaster 300 on a TrueBond NATO strap all weekend; 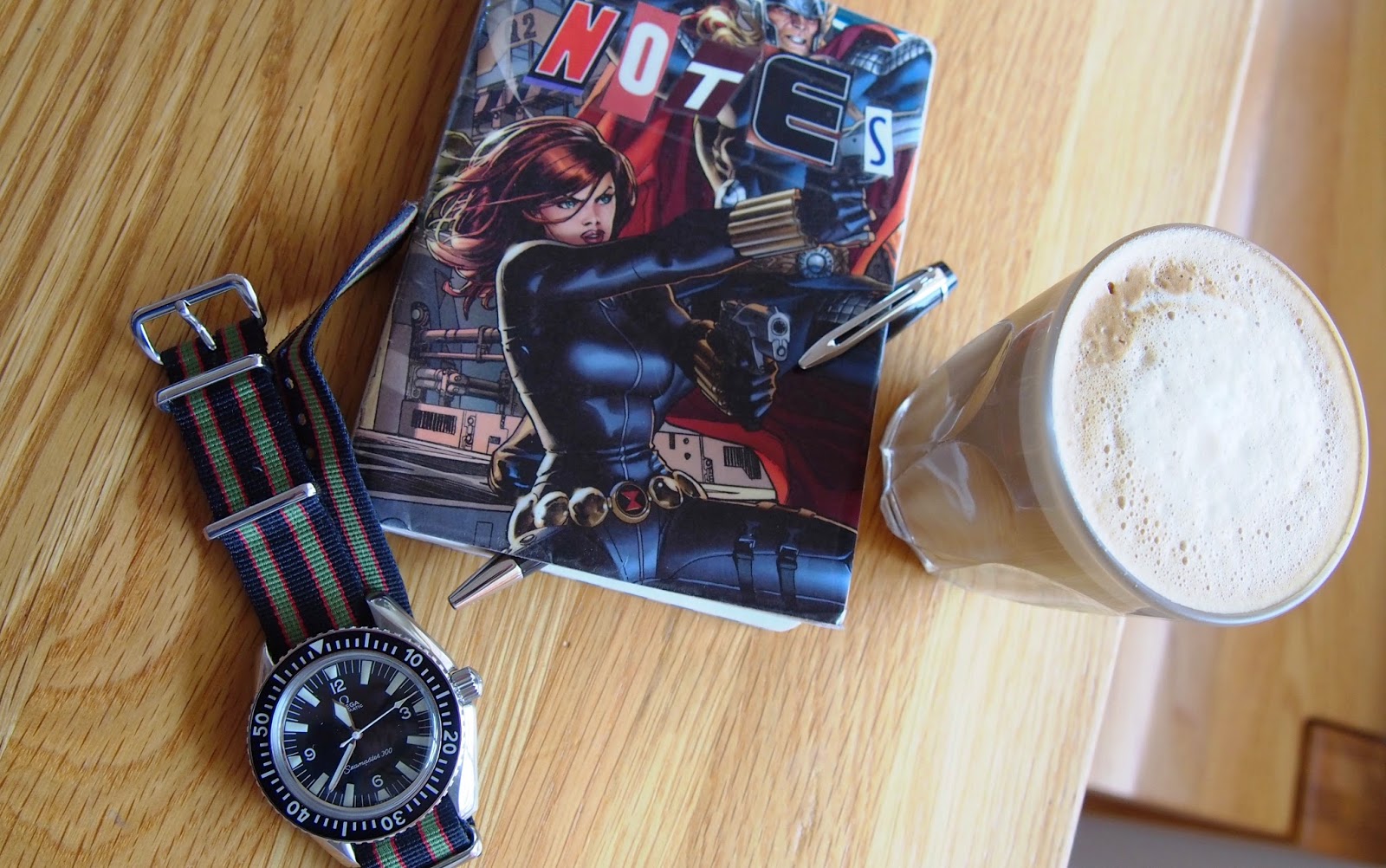 Monday
Watched a couple of episodes of Veep. It stars ex-Seinfeld star Julia Louis-Dreyfus as Selina Meyer, the Vice President of The United States. She has a small team of advisers and yes-men who effectively get her into, and out of, trouble on a regular basis due to her not being as smart as she thinks she is. And there's a great running gag throughout the show;

MEYER
Did The President call?

After you hear this three or four times, you begin to get the impression that the Commander-In-Chief hates her guts, since he never returns her calls.

I'll be honest, I wasn't a regular Seinfeld viewer, despite the fact that it was probably the sharpest sitcom on TV throughout the Nineties, although I did like Frasier.
In Veep, Louis-Dreyfus is brilliant. I've watched the first eight episodes and her performance is very funny, and a virtual 180 degrees from her Elaine Benes character from Seinfeld, which would be a tough act to follow.
The supporting cast is great, notably Anna Chlumsky (who was Macaulay Culkin's co-star in My Girl back in 1991!), Tony Hale as her main lackey, and Matt Walsh, as one of her spin doctors. There's quite a bit of profanity (it's HBO, folks. They keep it real), and the writing is so sharp, with one-liners and put-downs coming at an alarming rate at times.
I hope this show is around for a long time.

I've been reading The Lonely Skier by Hammond Innes. Written in 1946, it's the story of Englishman Neil Blair, a hard-on-his-luck war veteran who wants to write screenplays. He bumps into an old war buddy who offers him the job of going to a ski resort in Italy and 'observing' the movements of the guests and reporting back. He's not sure why he has to do this, but decides to take the job, since he needs the money and might even get enough ideas to churn out a script.
Once there, he meets an odd assortment of characters who each harbour secret motives for being there. The blurb on the back cover mentions Nazi gold, so that's a good enough reason for them to be there. I'll be interested to see how this story pans out. It has the hallmarks of an Agatha Christie tale, but I'm pretty sure it'll be vastly different to a Poirot/Miss Marple story.

Wednesday
Switched over to the Omega Speedmaster Professional, seen here on a map of my old stomping ground and surrounding suburbs; 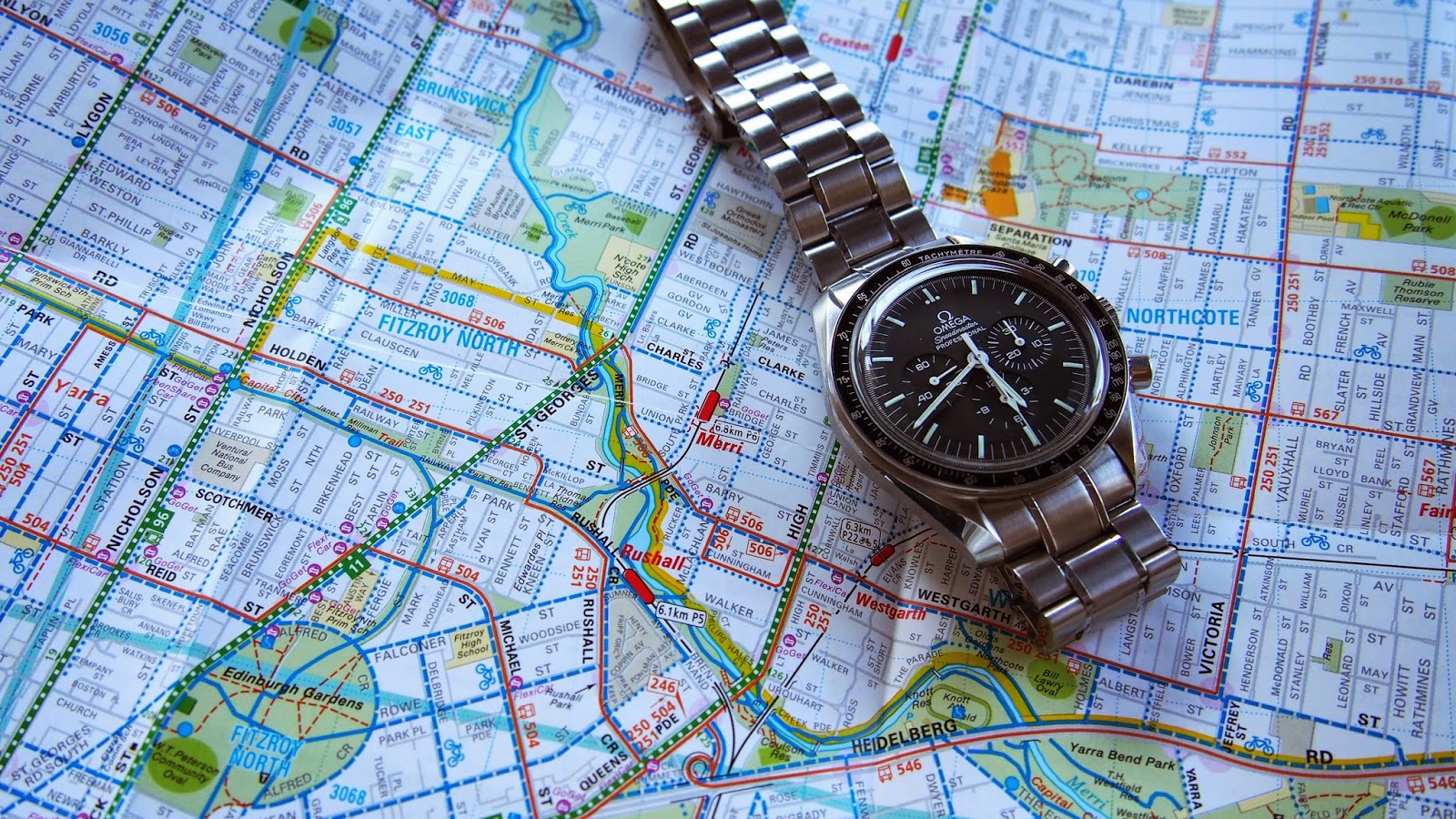 I have to say that I have never used a GPS in the car. I don't have one and have no plans to get one. I still prefer to look at a paper map. When I had my Nokia Lumia 800 smartphone, we used the GoogleMap app to plot the drive out to Daylesford, located about 110 kilometres North-West of Melbourne. While it was nifty seeing a small blue triangle (representing the phone's location on the map) on the screen, it was nerve-wracking watching the phone's battery life bleeding away. Sure enough, the battery died ten minutes from our destination. We got there, but I decided then that I hate using mobile map apps.

Today
Not much happening. Got an assignment to complete for next Friday and that's going okay. Think I'll give the lawns a quick mowing. Right now, I'm wearing the Omega Railmaster on strap; 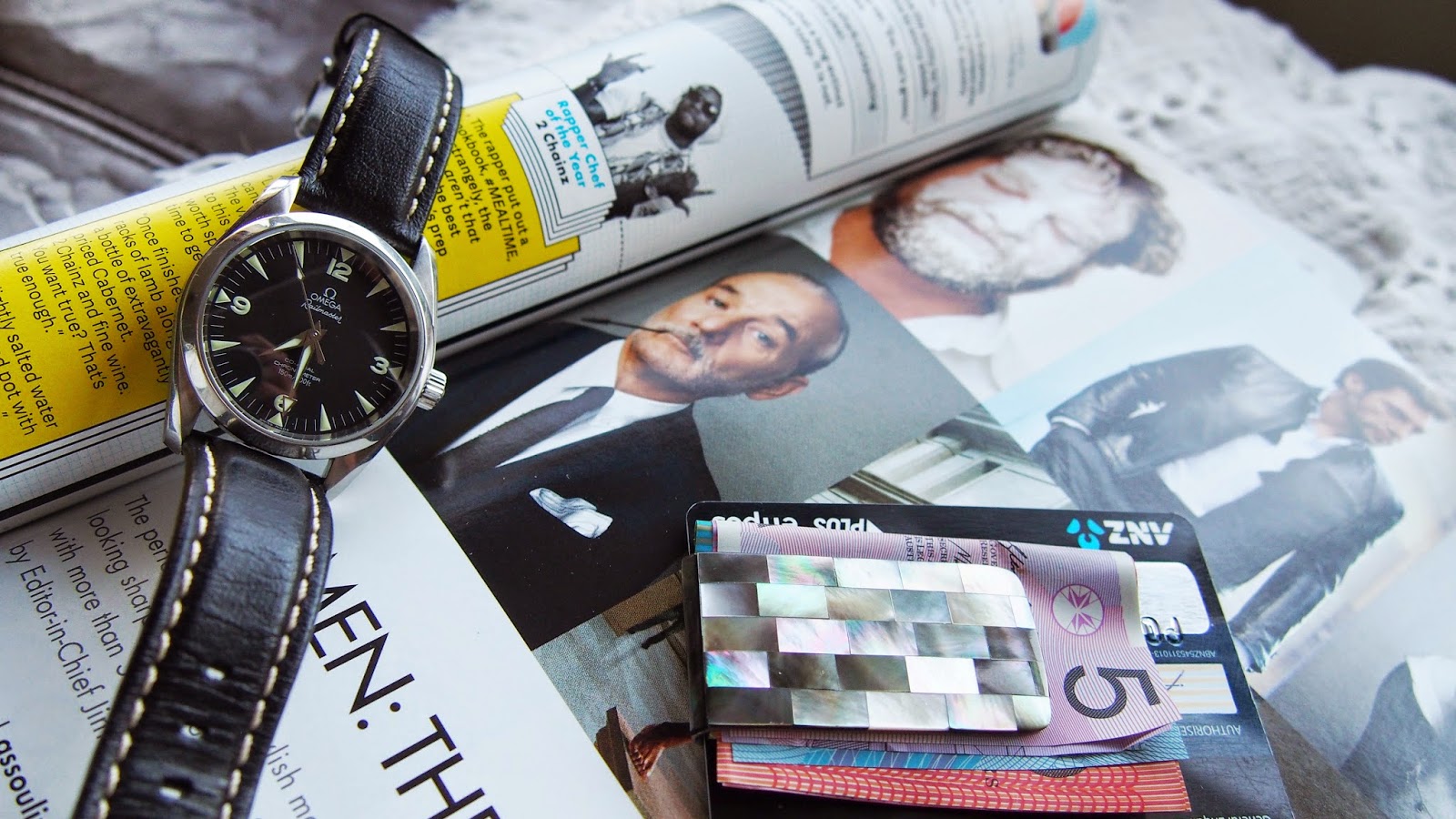 Although, I may put on a Seiko if I'm gonna tackle any gardening. Anyway, it's Melbourne Cup Day this coming Tuesday. One of the most prestigious horse races in the world. I reckon half the people in this town will give themselves an extra long weekend and take Monday off.
I'll check the form guide on Tuesday morning and see if there's anything worth putting a little bet on.

Till then, thanks for reading and have a good weekend, all!


EDIT: Hey, I forgot to mention that the Film Ferrania Kickstarter project managed to achieve its budget with a little extra cream on top. They were seeking to raise $250,000 and managed to get a total pledge of  almost $323,000. Well done, ragazzi!
There is a small handful (if four fingers constitutes a handful) of 35mm film production companies left in the world.
One more player in the game can only be a good thing.

Film Ferrania
Posted by teeritz at 17:09