Last Weekend
We watched the remake of The 39 Steps, starring Rupert Penry-Jones as Richard Hannay. Produced in 2008, this was a scant 86 minutes long. Alarm bells went off in my head when I saw the running time on the back of the DVD case. Having just finished John Buchan's book, I felt that you'd need more than 86 minutes to tell the story. Sure enough, this version was considerably different to both the book and the 1935 Alfred Hitchcock version, which was different to the book as well.
So, was it any good? Ahhh, well, it was a great looking film, but then the English do these period dramas to perfection.  The Art Direction, costumes, locations and props are always perfect. As was the casting and the actor's performances. But the story just felt flat and predictable to me.
The introduction of a female character who is a suffragette AND an agent for British Intelligence turned this into a fairly routine affair, in my view.
I was wearing the 1962 Omega Seamaster from last week before switching over to the Seamaster 300; 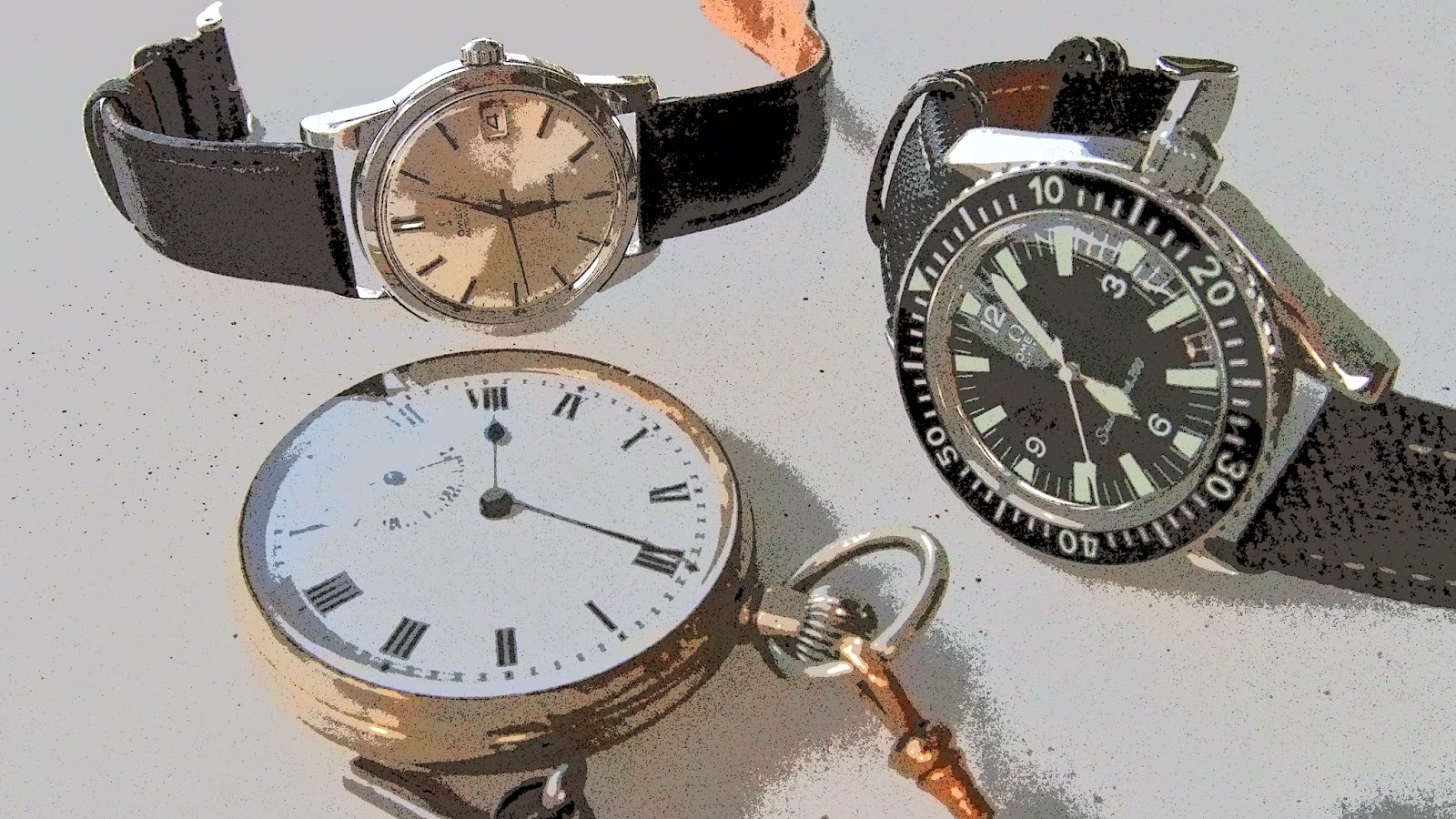 Monday
Worked on another assignment. Number 3, I think. They are all beginning to blur. Six pages long. Probably twice as much as was necessary. Oh well.
Then, as a break from study, I thought I'd cover the dust jacket of the book that I'm reading.
I have a roll of this covering that is made up of soft plastic attached to brown paper on two sides. The dust jacket is meant to get slotted in and then cut to size. 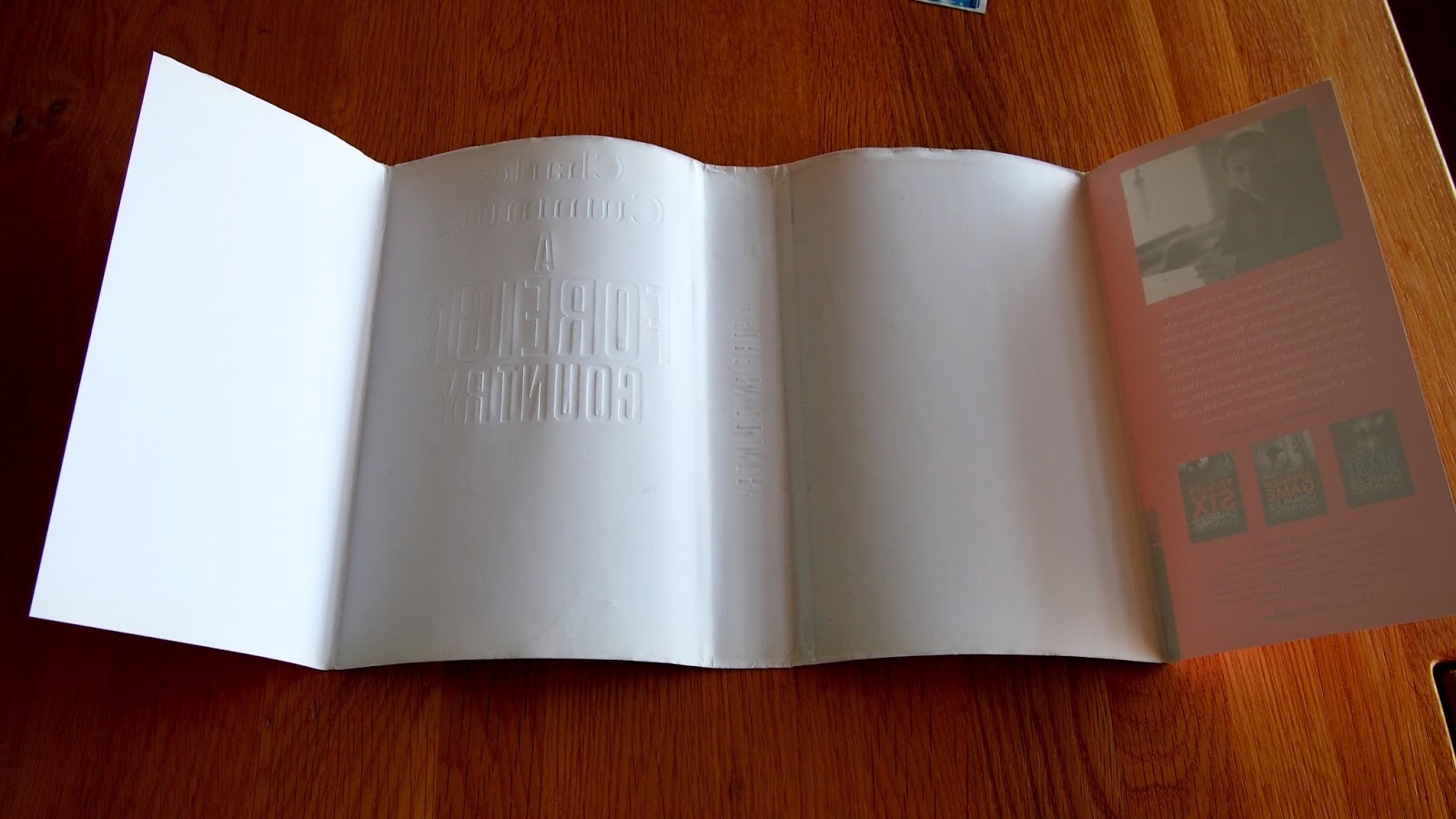 ...and is then trimmed to size, with about ten centimetres of overhang, which is then folded in. You then carefully slide the hardcover of the book between the back of the dust jacket and the brown paper.

This can be a little painstaking and, in this instance, the result was not entirely perfect since there's a little too much plastic protruding beyond the dust jacket, but that's okay. Good enough for me. And better than some books I've seen in libraries. 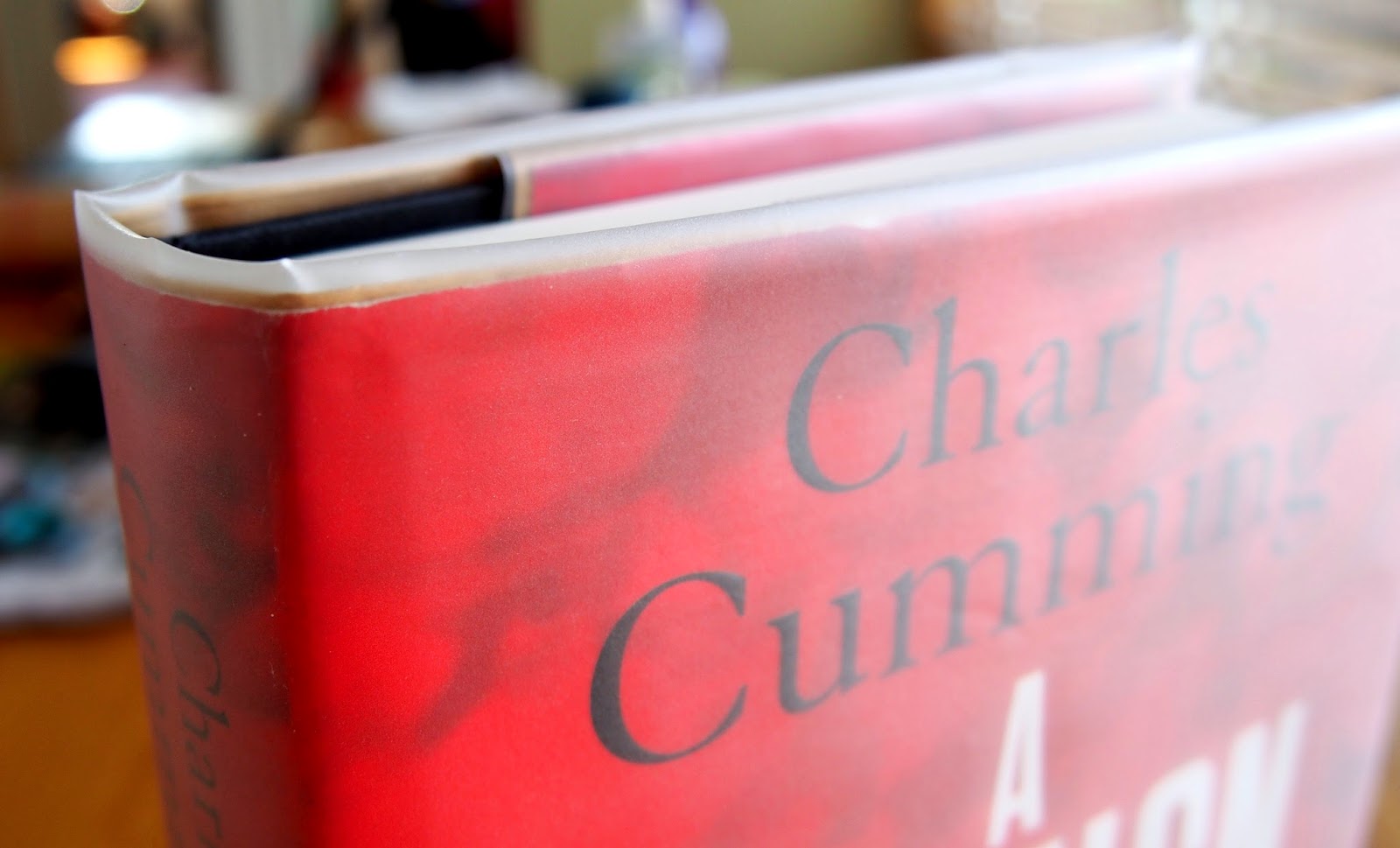 Once I was done, I thought I'd make a coffee and sit out on the front porch to read a chapter or two. 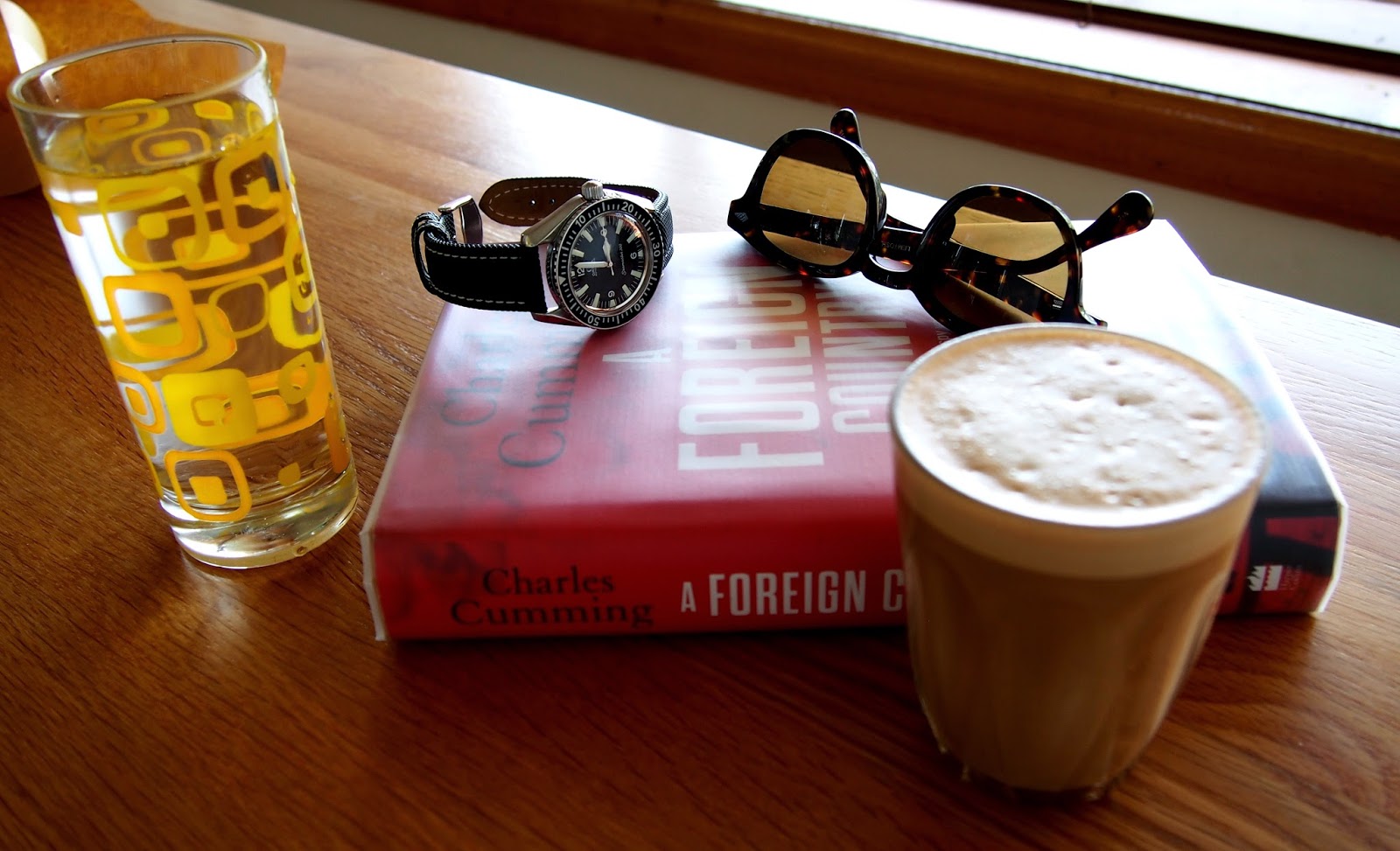 Later in the day, I received a lens case in the mail. Hopefully, it'll hold two Olympus lenses. The seller used some vintage stamps from the early '80s. At first, I thought they were commemorative. And then I saw the price on them. This seller's (bless him) been holding on to these stamps for over thirty years! Ain't life a wonderful thing? Australian postage stamps are currently 70 cents each. I think I'll keep this section of the envelope as a bookmark. 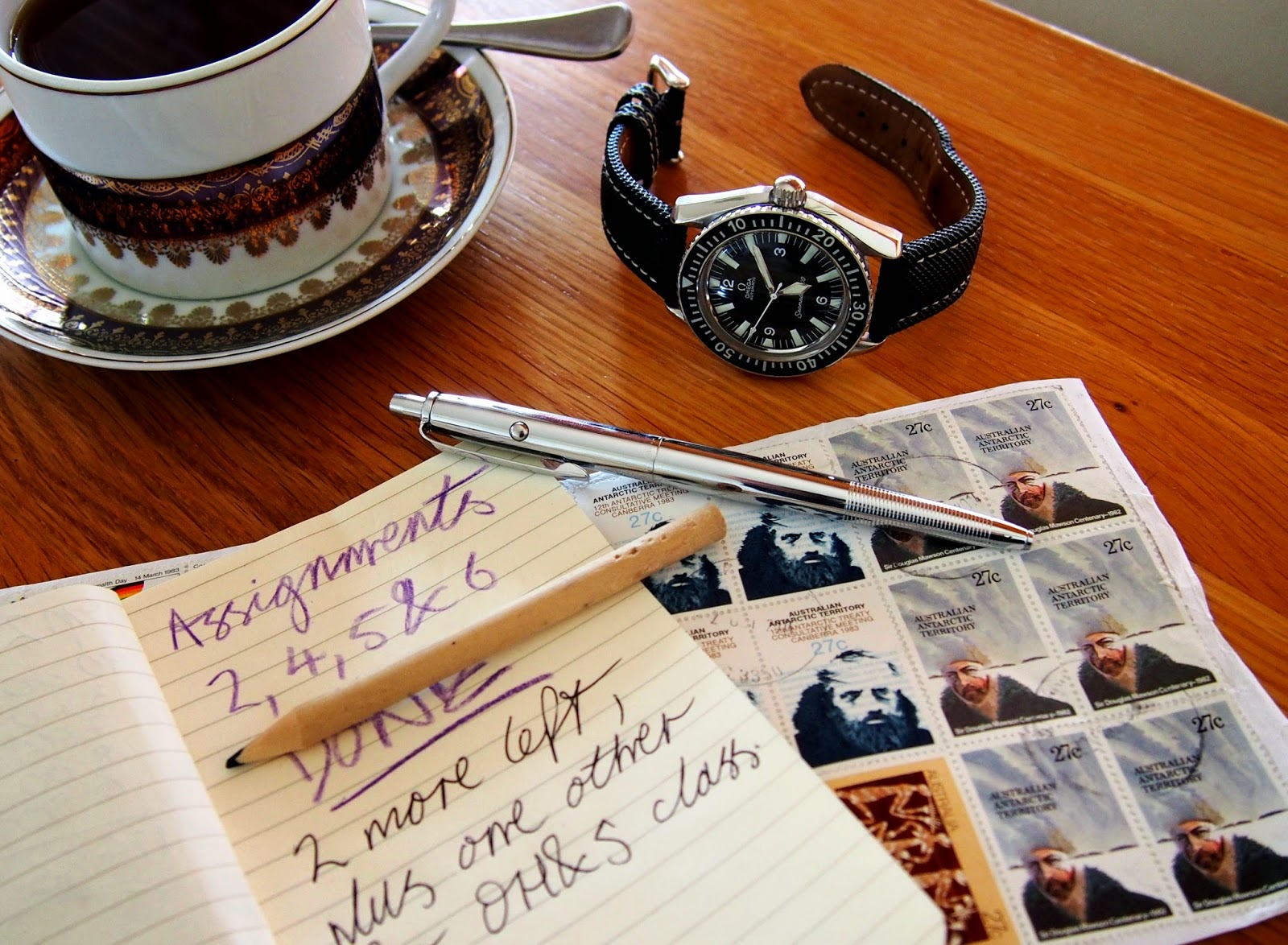 Wednesday
What a drag. First, I read of the death of Geoffrey Holder, who played Baron Samedi in the Bond film Live And Let Die in 1973. Along with Gottfried John (General Ourumov in Goldeneye-1995) and Richard Kiel (Jaws in The Spy Who Loved Me-1977 and Moonraker-1979) who both died last month, Holder was a memorable Bond villain. I understand that I'm now at an age where life begins to take things away (as was stated by a character in the last Indiana Jones film a few years ago), but it still sucks. Live And Let Die has a particular resonance for me because it was the first Bond movie I saw when I was but a wee laddybuck in the Seventies.

I had a class later in the day and handed in four assignments. Good to get those off my desk, I can tell you. Got home and received a call from a  lady at a nearby bookstore. I had an interview with her two weeks ago and it went very well. Spent over an hour chatting to her about my work history, experience, etc. She called to tell me that I was unsuccessful in getting the job. She said it was a really good interview (not good enough, it seems) and would I be happy for her to send my details to some other stores within the company? I said that would be fine, but I will obviously keep looking elsewhere.

By this stage, I was beginning to feel a little disillusioned with my studies as well. It might have to do with this barrage of assignments. Anyway, the only way out, is through.
I switched watches later that afternoon;

I wrote a review of this Tissot Visodate Heritage Automatic back on October 10th, 2010. At the time of writing (5:44pm, 10/10/14), this review has had 404,451 page-views and is the most widely-read post on my blog, excepting the Dry Martini post, which I think is a spam-magnet and not being read by people legitimately interested in how I make a Martini.  This Tissot watch has been very well received since its release and I think my review is read by people who are interested in the watch rather than fans of my writing style.

Today
I switched back to the Omega Seamaster 300. I tend to go through stages where I'll wear a particular watch for days on end. This one has such a nice, vintage dive watch design and its legibility is sharp. 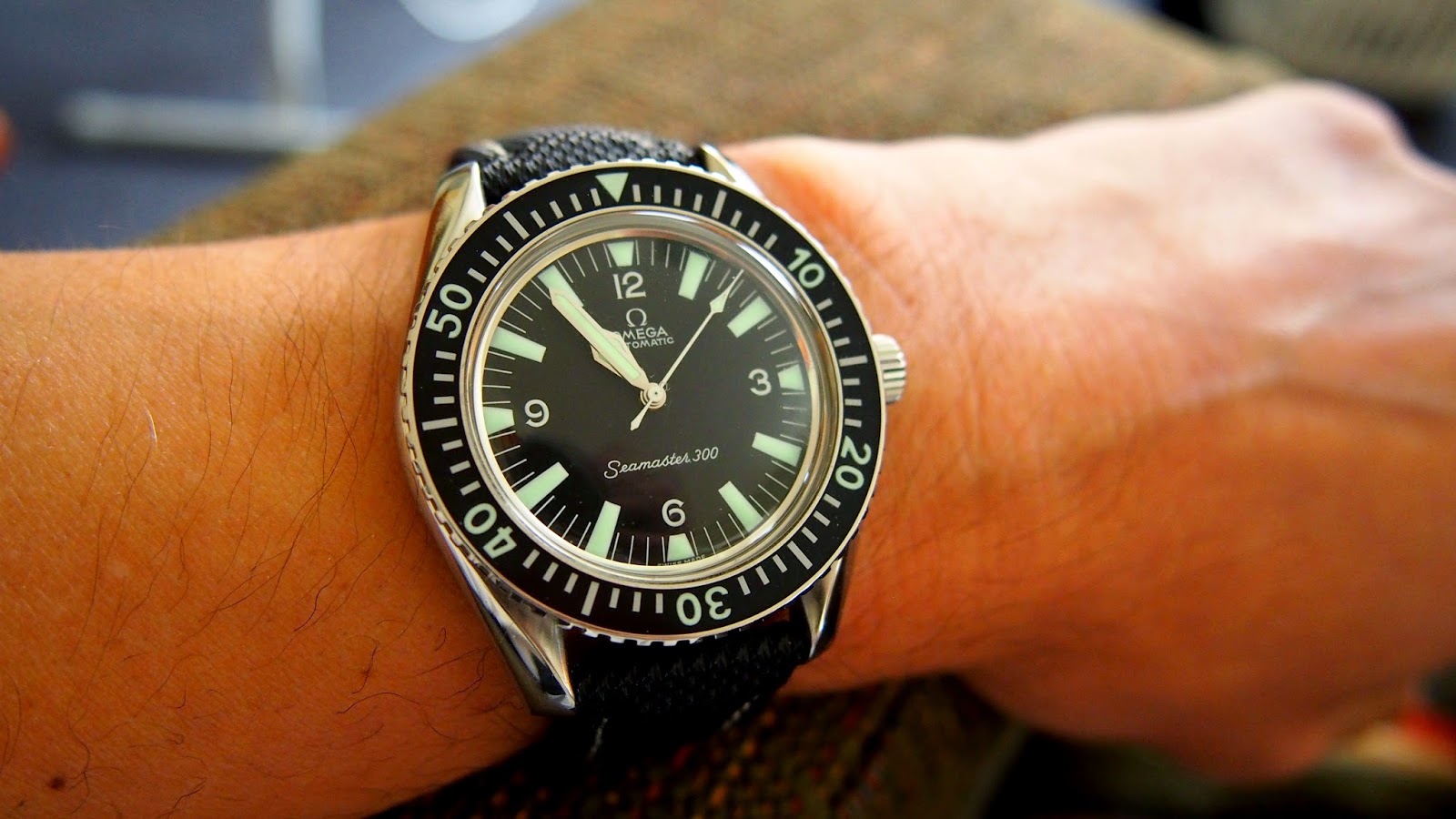 I decided today was a good day to go visit the library where I did my industry placement last month. I have an assignment due on Monday(!!!), to do with Occupational Health & Safety and it requires that I visit a library and look for areas that may be a hazard to the safety of both staff and library patrons. Since I spent a few weeks working in this particular library, I thought it would be suitable for the assignment. I spent about 90 minutes there, walking around, checking the fire extinguishers and Emergency Exits, the condition of the carpet, the height of the Information Desk, etc, etc, until I felt I had enough notes to use. This assignment needs to be only 500 to 700 words long, but I will need to use correct OH&S terminology, such as 'risk assessment' and 'hazard identification'.
Yep, I'm in for a fun weekend, but by this time Monday, I will have completed and submitted this one. Then I can get started on a report on silverfish. Are you as riveted as I am right now?
I traveled light, with a neoprene laptop case doubling as a satchel; 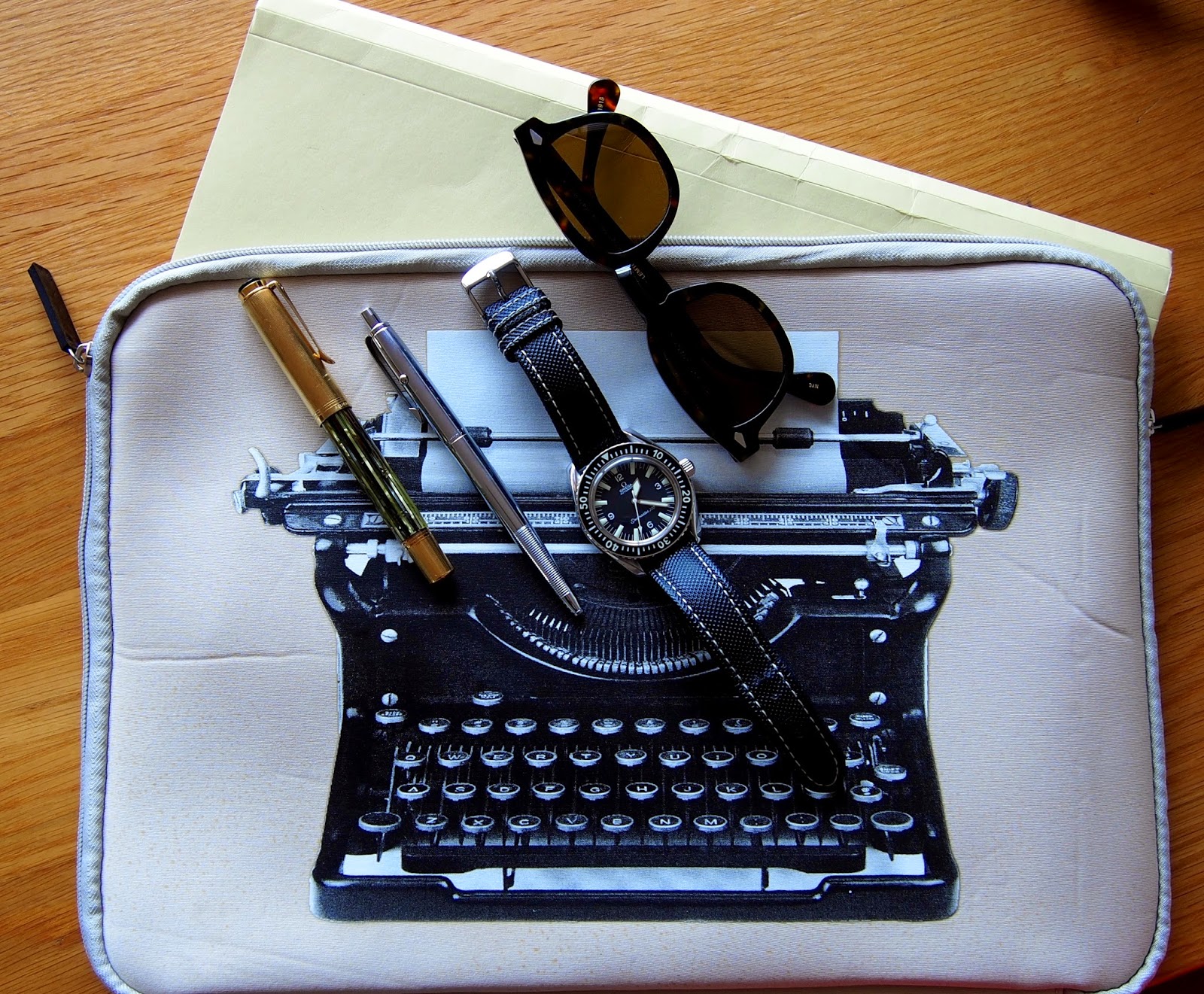 Got home, had lunch, started this post, picked the kids up from school, and took the cat to the vet. Madame Wispola Deusenberg has been gnawing at her fur on-and-off now for almost a year. When I took her to the vet last year, they determined that this stress-related behaviour was a cat equivalent of biting one's nails, since they could see no parasites on her fur.
However, earlier this week, I noticed a few dark hard scabs on her skin at the base of the fur. Some kind of tick or flea?
The vet had a good look and took some samples of the scabs to view under a microscope and said that there are traces of bacteria on the site. A cortisone injection, a packet of antibiotics and a hundred and fifty bucks later, and we headed home with Her Ladyship snugly wrapped in a towel.
Today's vet thinks that this condition could be an allergic reaction to some plant or flower. That makes a lot more sense than 'stress-related behaviour'. 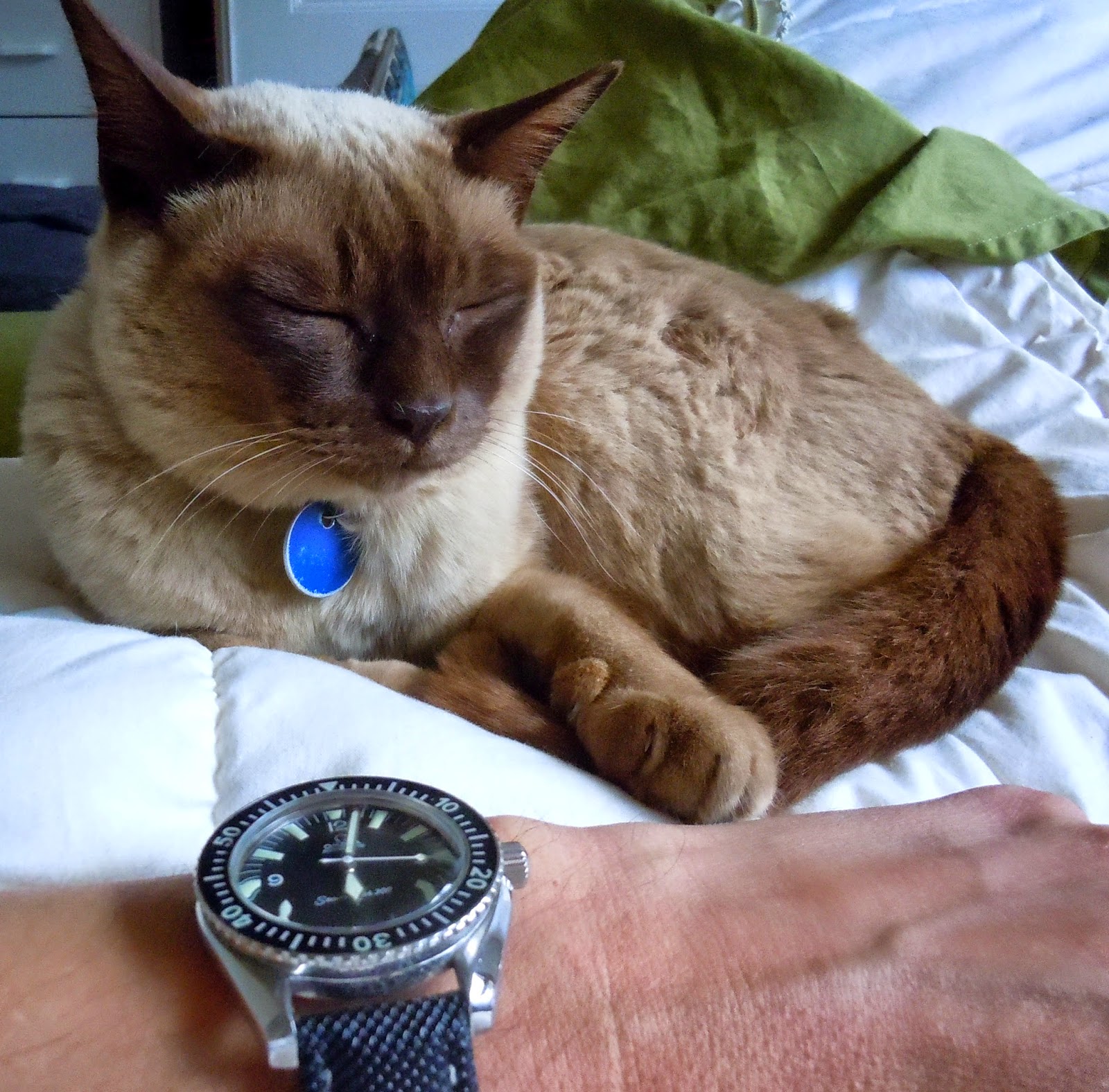 I mean, come on, does she look stressed to you?

And so, that's another week done and dusted. Those two Italian guys with the Kickstarter campaign to fund their film manufacturing company are up to $236,000. Their goal is $250,000 and they have 19 days left.
I've made my pledge and I'll once again include a link, just in case anyone here wants to get on board this great project.

Okay, I think my pizza's almost ready. Thanks for reading and have a great weekend, all!
Posted by teeritz at 01:44