Busy week. Also, I'm a little tired, so I'll try to keep this one short.

Last weekend
The new skins arrived for my Olympus Trip 35s. I had an hour to kill on Sunday afternoon, so I figured I'd take a crack at re-covering the cameras. This is how they look with their old covering removed; 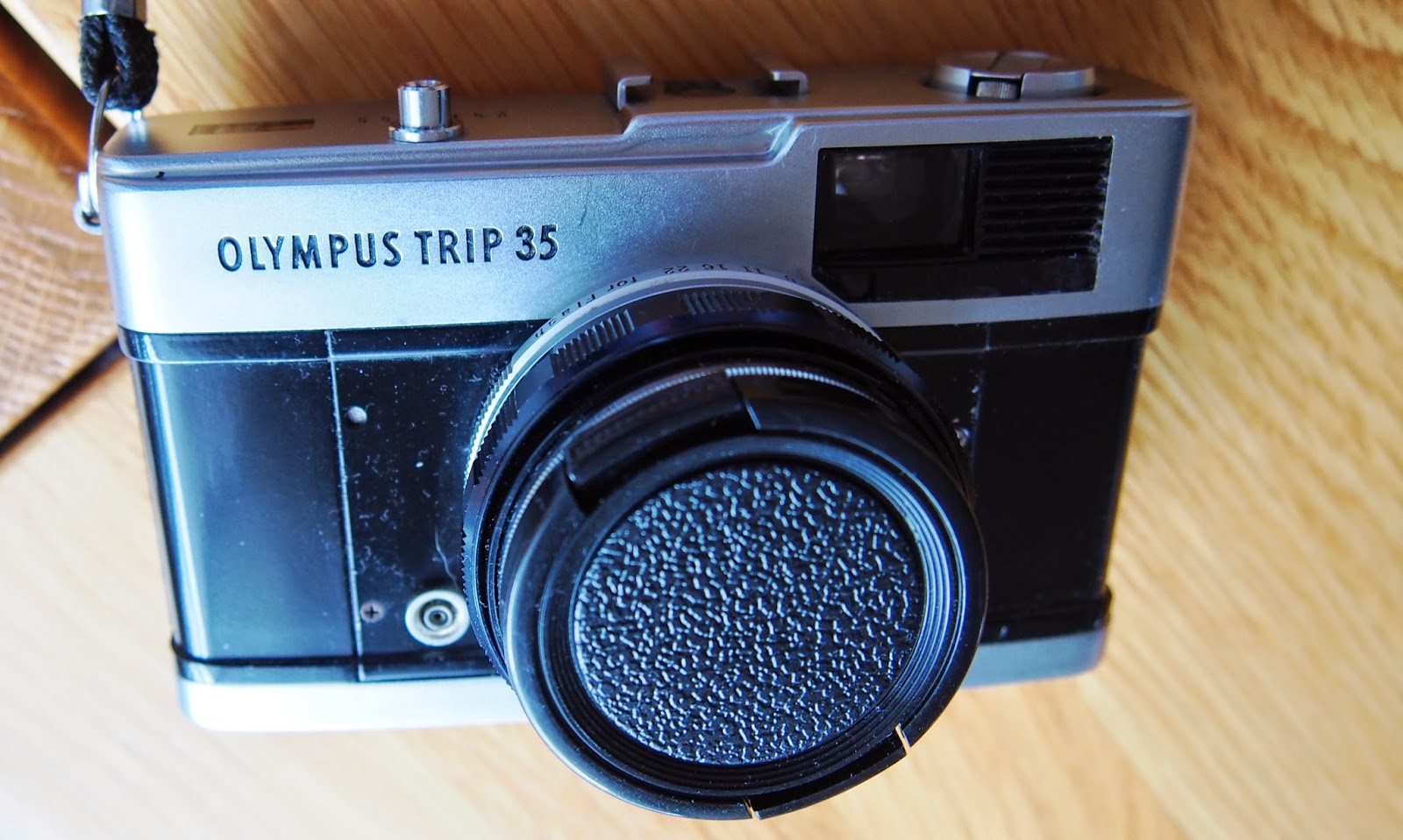 And this is how the covering looks. It's a faux calf-skin pattern embossed onto vinyl. I already removed one piece; 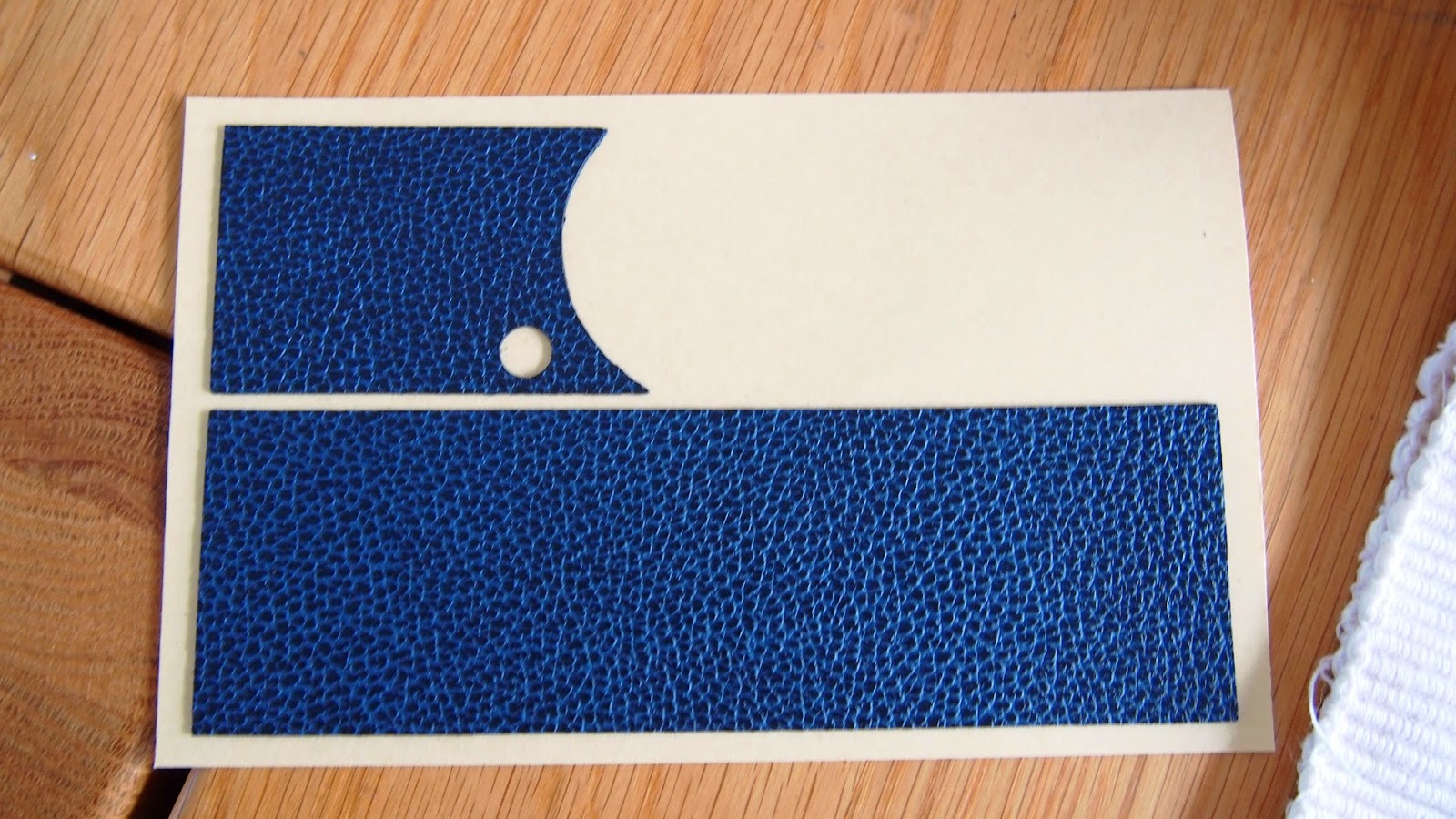 And here's the piece applied to the camera. The left-hand side still has the factory covering on it; 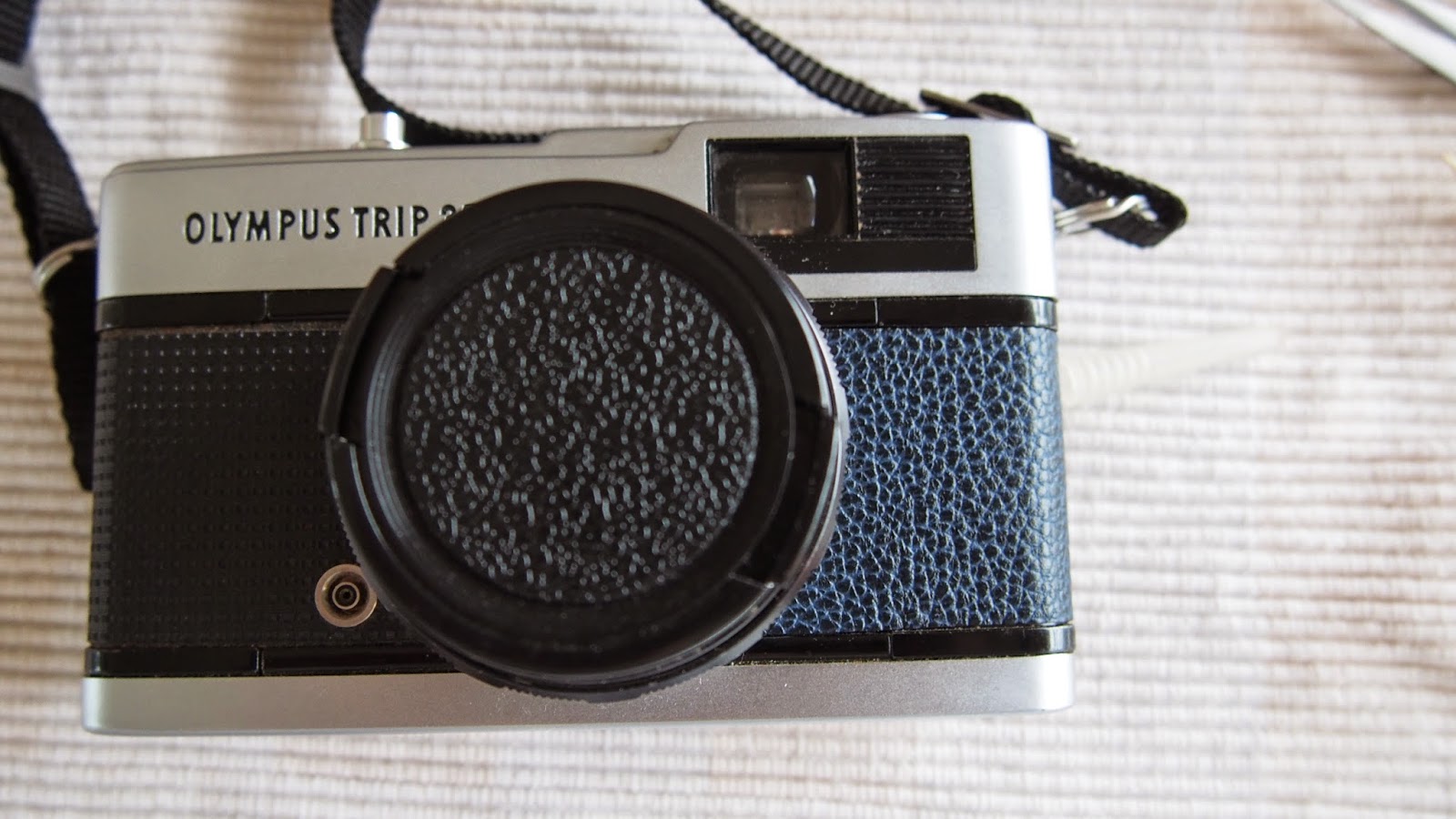 A little time and a reasonably steady hand is all that's required. I made some minor trimming to one edge of the covering. 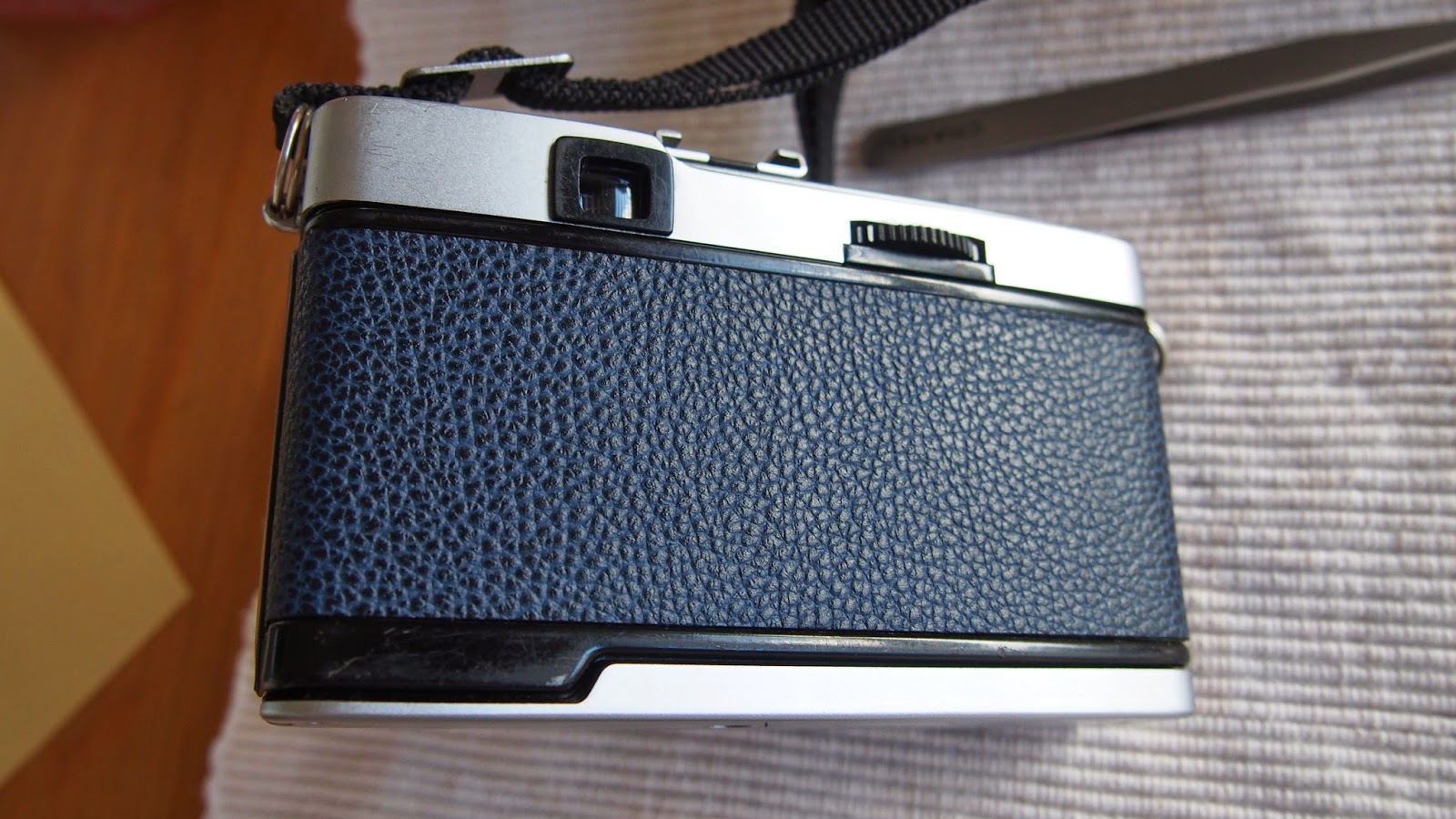 And then, onto the next one, this time in red lizard-skin pattern; 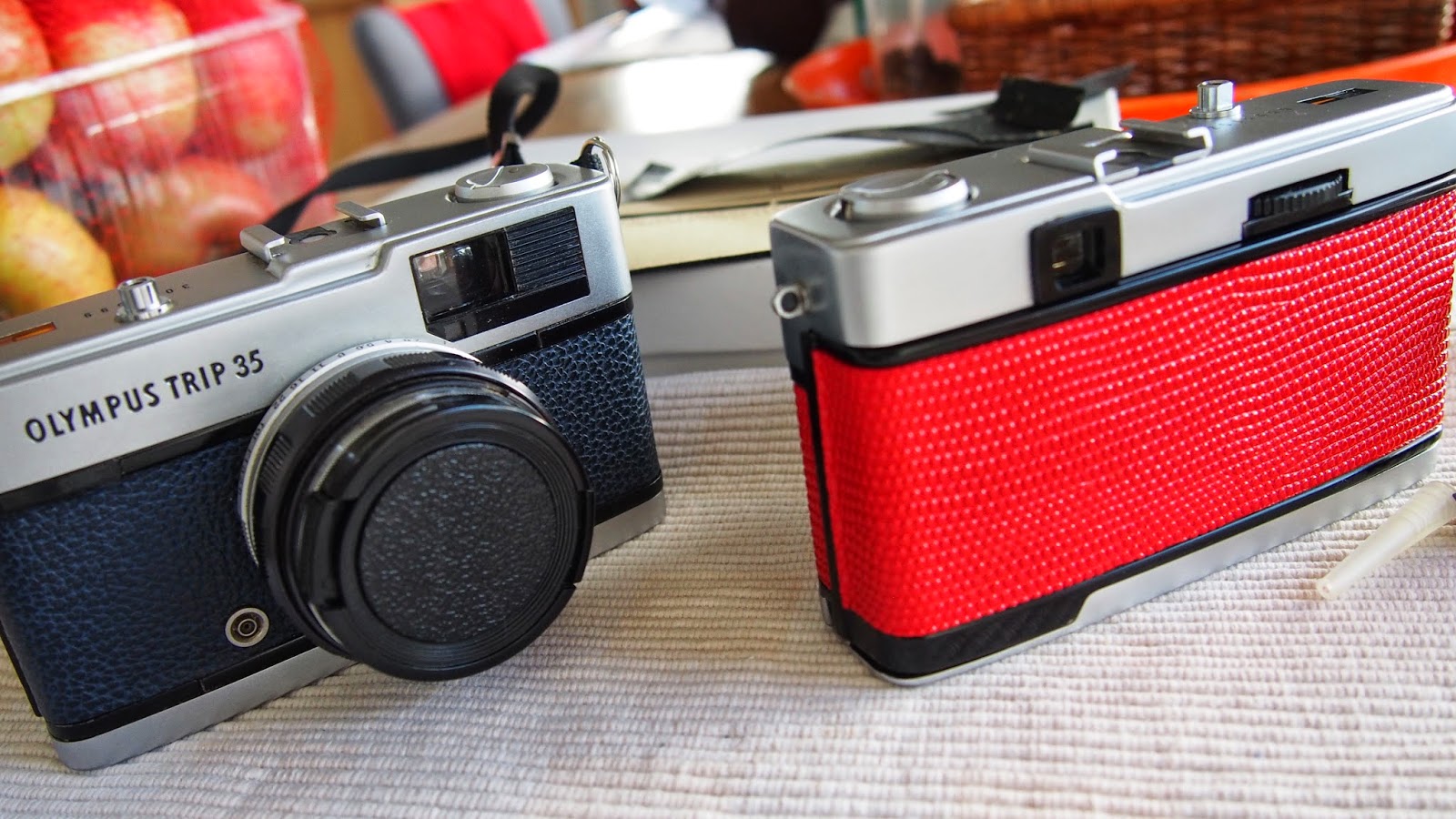 That way, there's no mistaking one camera for the other. I also got some replacement light seals for the back of the camera; 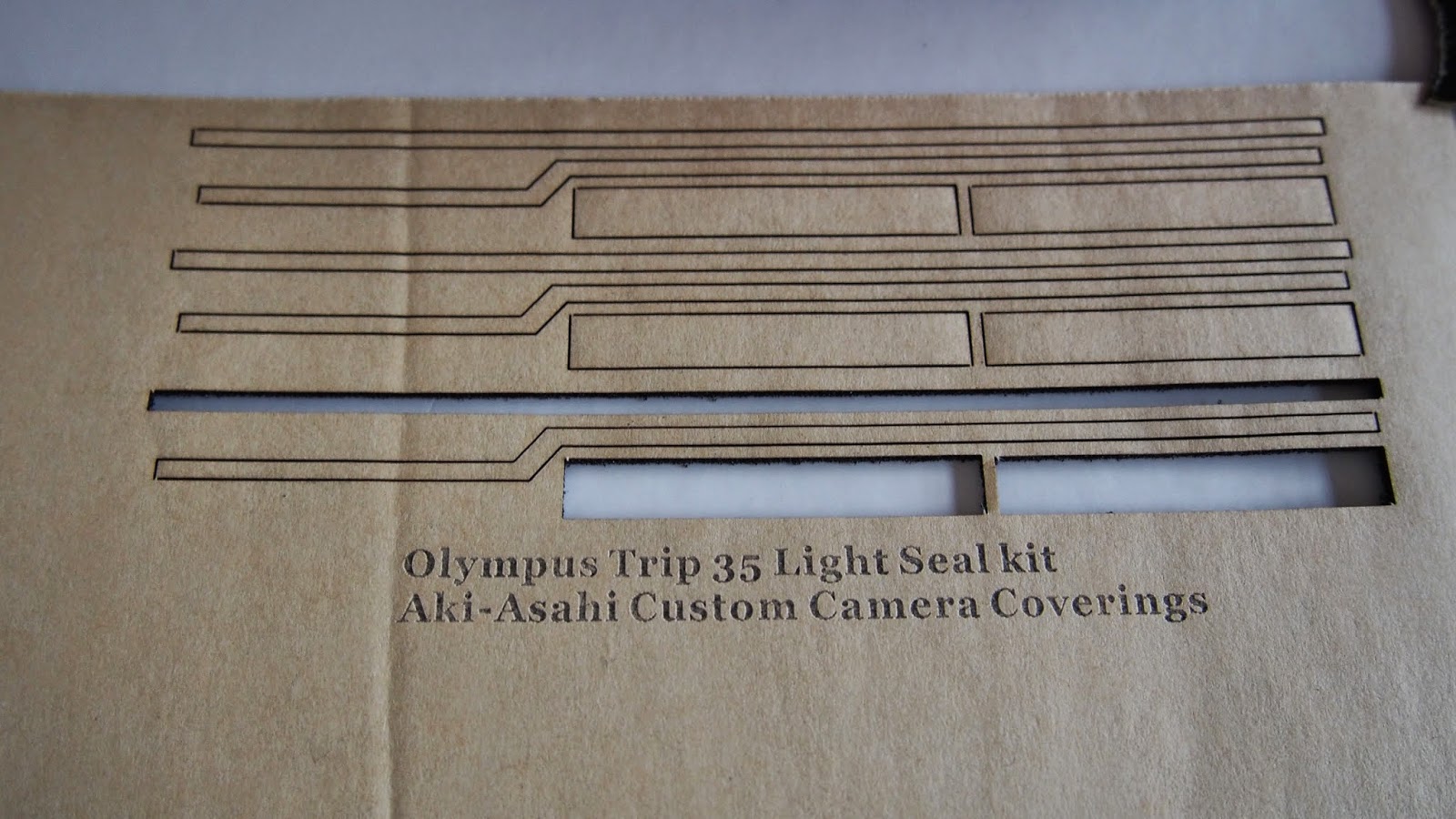 All up, it cost me approx $25 for the two skins and light seal kit. Not bad at all, considering the kind of prices that repairers were quoting me.
I've loaded a roll of 36 exposure 200ASA colour film into the red one and started taking pics. It'll be interesting to see how they turn out after all the messing around with the focus that I did a few weeks ago.

Speaking of lens re-focusing, that post wound up on something called scoop.it where there are a bunch of other Trip 35 related posts by bloggers from around the world. It was here that I took a stroll around and landed on a great photography blog called;

Jak, the guy who runs this site still uses film, so he's a righteous dude in my book, and he has a soft-spot for the Trip 35 camera. Some great photography on his blog. Well worth a look. 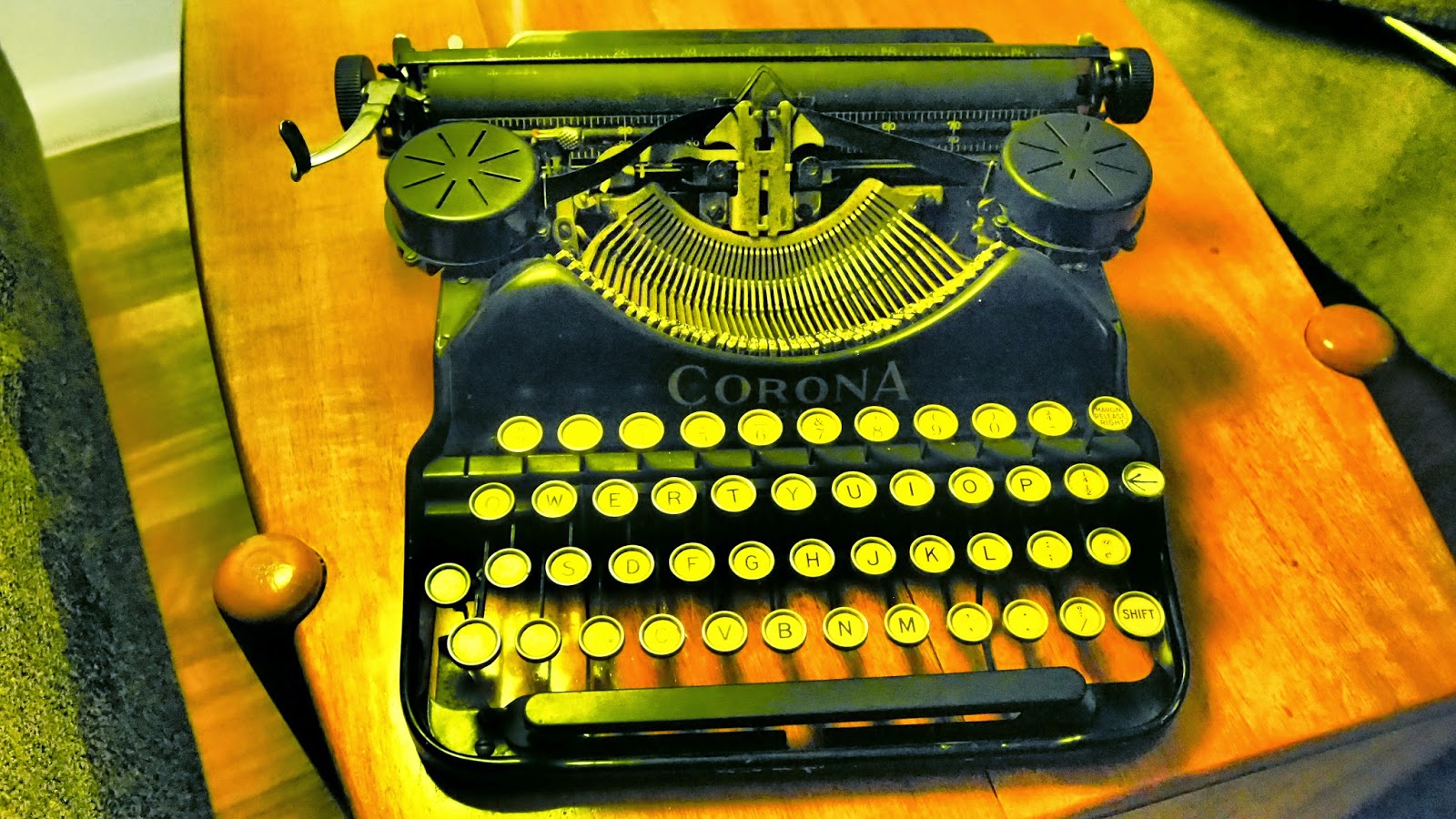 I've wanted a Corona Four for quite some time, but this one is a little rough, to be honest. I love the look of it, but I think it has sat dormant for decades. I fed a sheet of paper into it and then had to wrestle the platen knob to feed it through. And here's why; 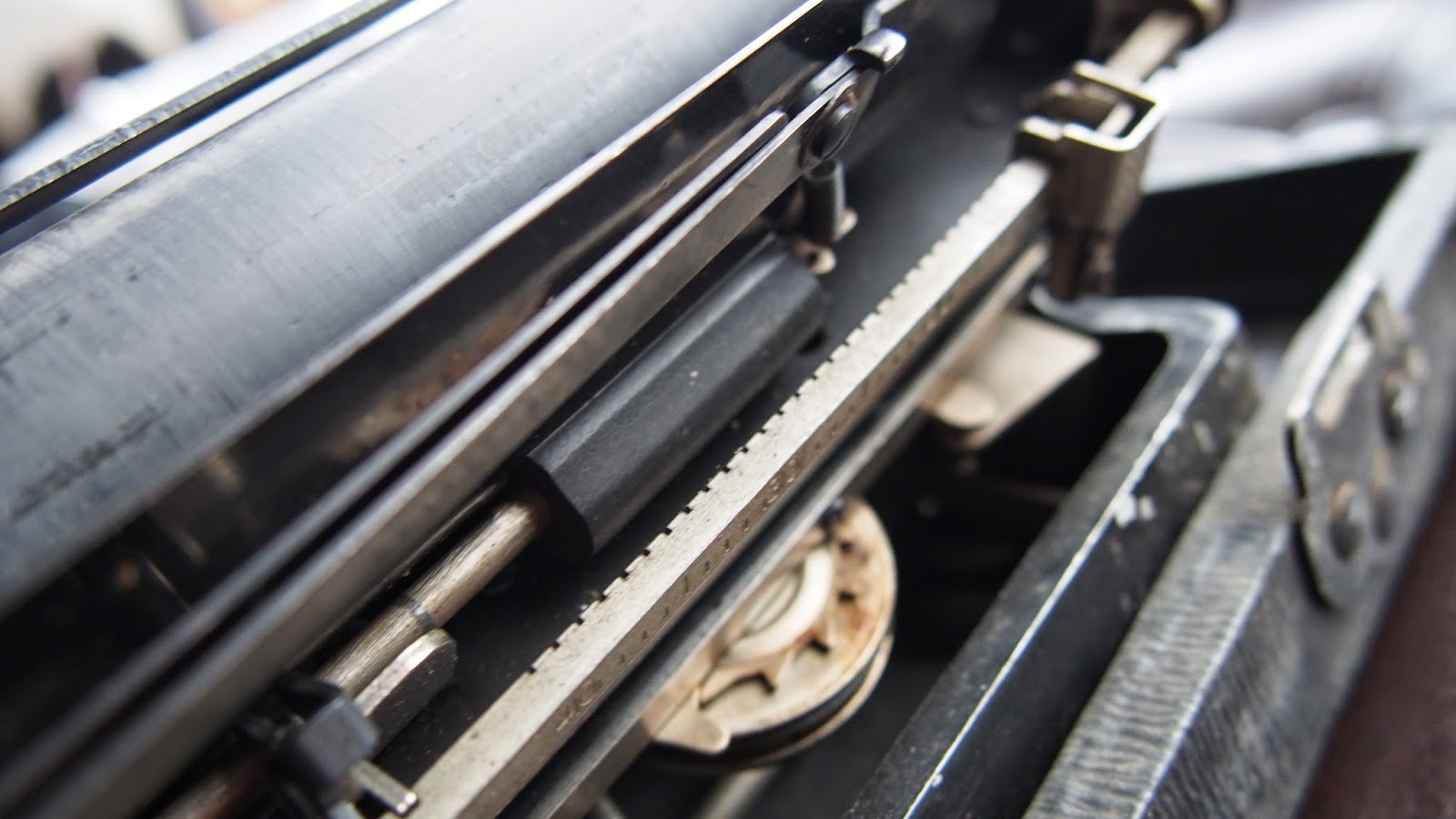 See the thin rubber roller in the centre of the frame above? See how it has a flat edge? The paper gets caught against it when you turn the platen. I think this typewriter has sat still so long that the rubber flattened out after being pressed against the platen. Both rollers are like this.
I figure I've got two options- A light and slightly time-consuming rub with some fine-grain sandpaper to remove that 'corner' from the roller...
...or a dismantling of this section and some mad attempt at whittling down some rubber tubing until I've made replacements for them.
I think the sandpaper option might be the more feasible one. From memory, Nat (from natslaptaps.wordpress.com) had some good results from replacing these rollers with new rubber, but I'm not sure I'd like to go to that extent just yet.
Of course, I could send it to JJ Short one day...if I can figure out complete removal of the platen first.

Also, the back-space keytop and symbol were missing. No problem, I just used one of the spare Royal QDL keytops and made a quick 'practice' key. I think I'll be printing out a jazzier-looking arrow on Word (wingdings) sometime soon. But I doubt I'll be able to match aged ivory patina of the other keys. No biggie. I've got some nice, cream-coloured card stock that I can use.
In the meantime, I'll give the platen a wipe-down with methylated spirits to remove 90 years of ribbon residue. 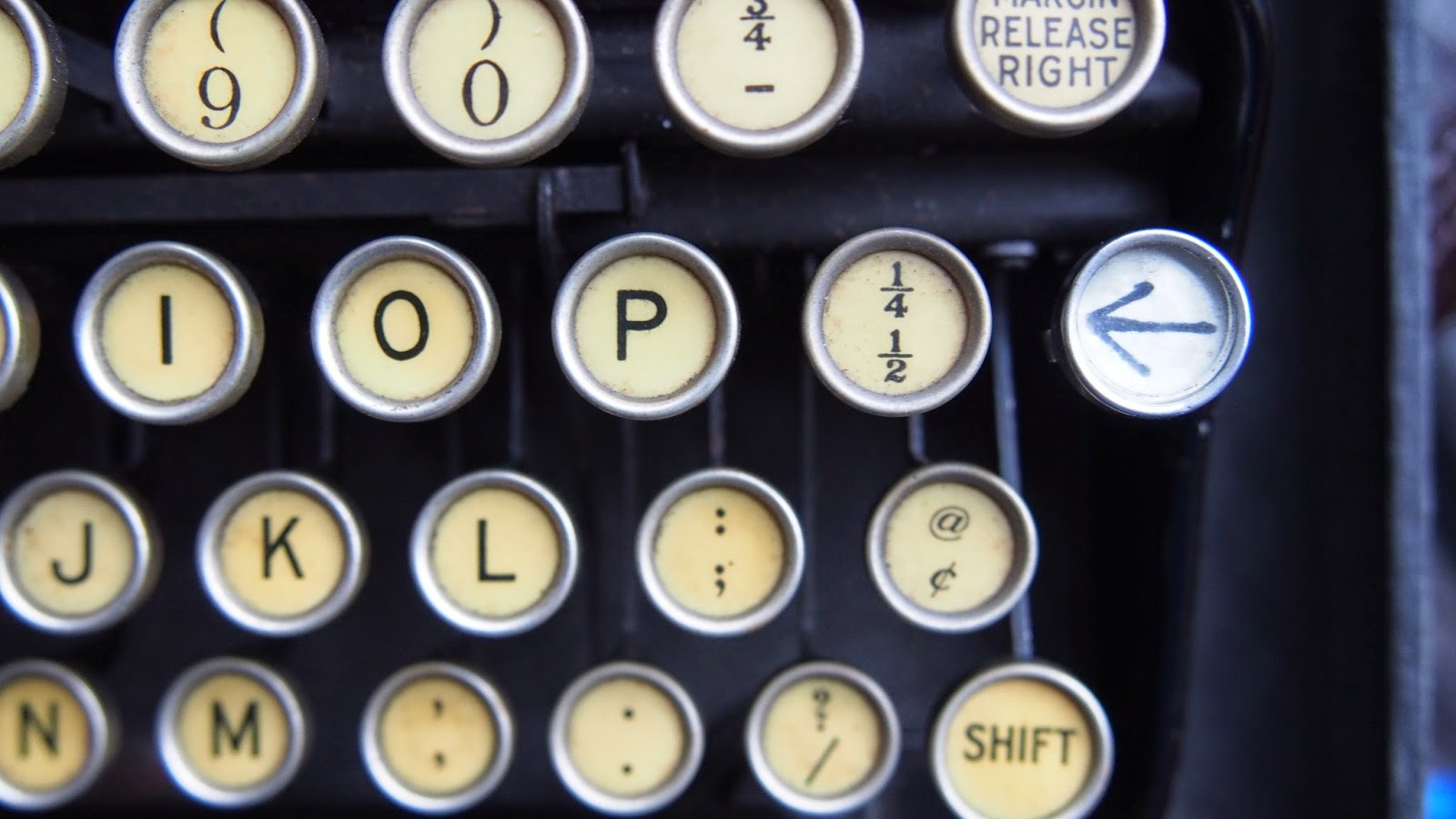 Based on the serial number (H406122) , I think it dates back to 1925. It definitely types loud and rough, but I'll see if I can get it running a little smoother.

I have to say it's a beautiful looking typewriter and it would be a shame if I can't get it running as it should. 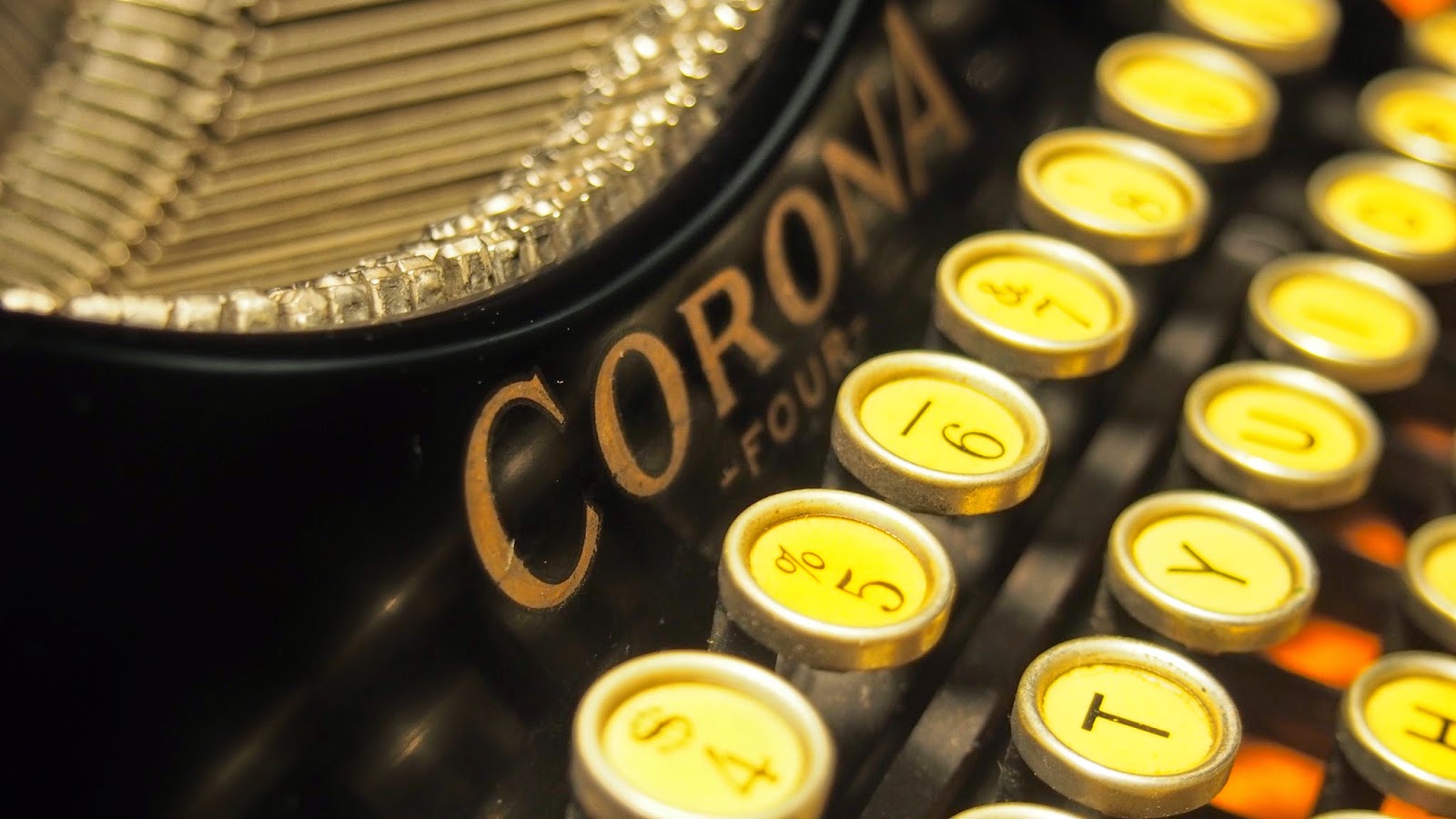 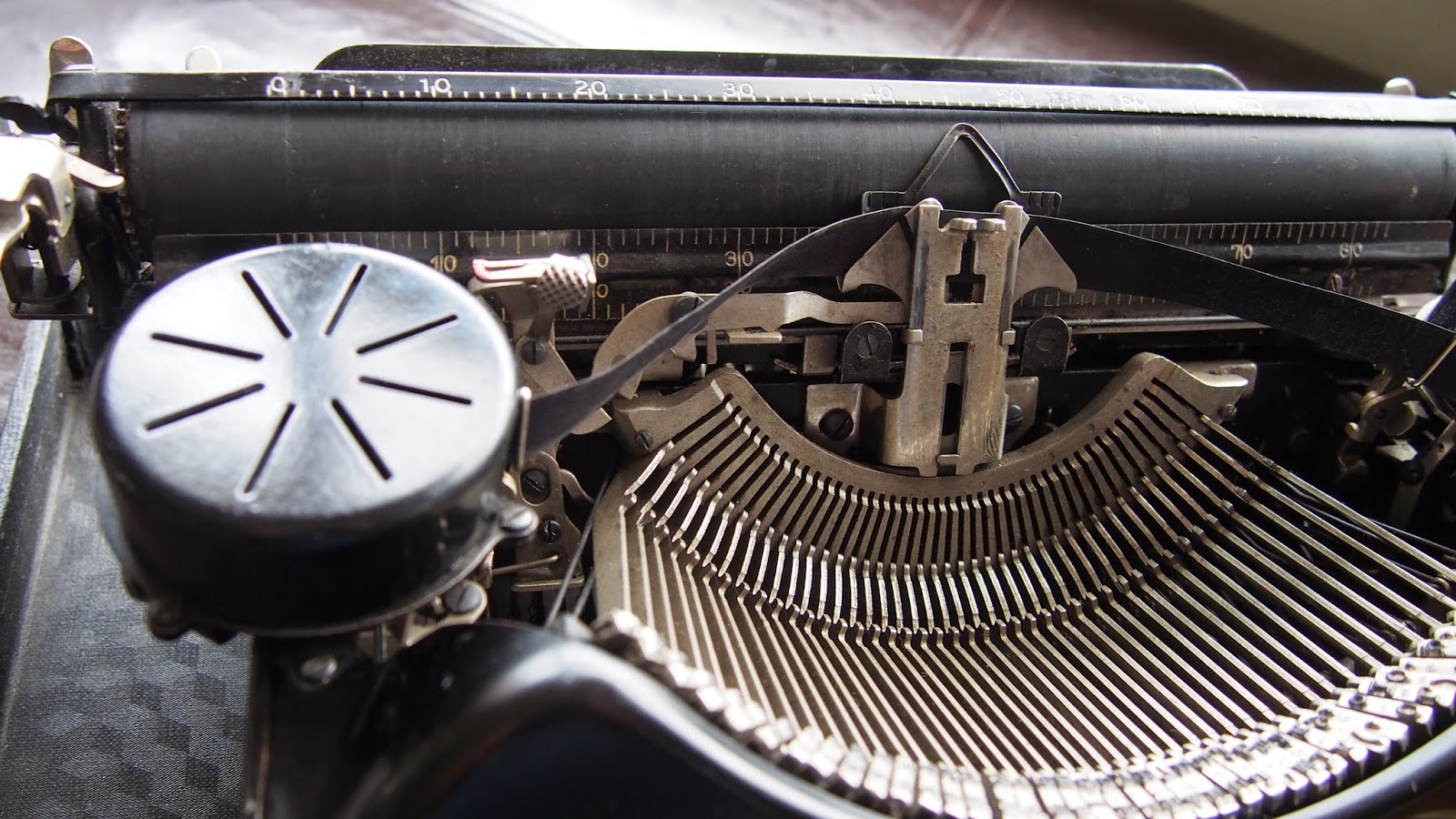 In saying that, though, I'm sure a slight cull is in order. I've come to realise in recent months that I enjoy using some typewriters more than others.

My absolute favourites are (in order of smooth and easy typing);

-the '47 Royal QDL, even with its erratic word-joining idiosyncrasy.
-the '66 Olympia SM9, which runs like it was built only yesterday.
-the '56 Smith-Corona Silent Super, with its nice, snappy typing action.
-the '45 Smith-Corona Sterling, 'cos it's rock-solid and types nicely.
-the '54 Olympia SM3, which slightly nudges out the '51 SM2 (if these were basket-shift, they'd be a lot higher up the list).
-the '55 Remington Quiet-Riter, which has a pleasant, middle-aged-spread typing action.

...My God, I think I only need seven typewriters! So why do I have seventeen? At least five of them are great to look at, such as the 1928 Royal Portable, the 1936 Smith-Corona Standard, the 1938 Remington Remette, and the 1952 Olivetti Studio. I suspect that if I replace the platens on them, they'll type and sound even better than they already do.

Of the rest, the Olivetti Lettera 32 is not going anywhere, since it was my school typewriter that hammered out numerous assignments, essays and projects back in the early 1980s. And the 1957 Groma Kolibri cost me a pretty penny and I have no plans to get rid of it.

Which pretty much leaves the Olympia Splendid 99, the Smith-Corona Galaxie II and the early '70s Litton Imperial. These three will probably go. And I may consider moving the SM2 as well, since it doubles-up against the slightly better typing SM3. Not sure about that, however. I think I have too many machines that don't get used.

And if I manage to snag myself a 1950s Smith-Corona Skyriter at some point, then I thin the collection will be complete. Although an early 1950s Royal Quiet De Luxe (Dreyfus design) would do nicely, especially if it types like my 1947 model.

Well, that was therapeutic. Although, I'm still slightly confused about it all.

Wednesday
I got a text message stating that my Working with Children Check had been approved. Cool.

Today
Caught up with a couple of friends today. hadn't seen one of them for about four years. Time rockets along, don't it? It was good to see him and we pencilled in a breakfast for some time in the next month or so.
Oh yeah, the purpose of this post, I was wearing the Omega Railmaster on a ZRC padded black leather strap. 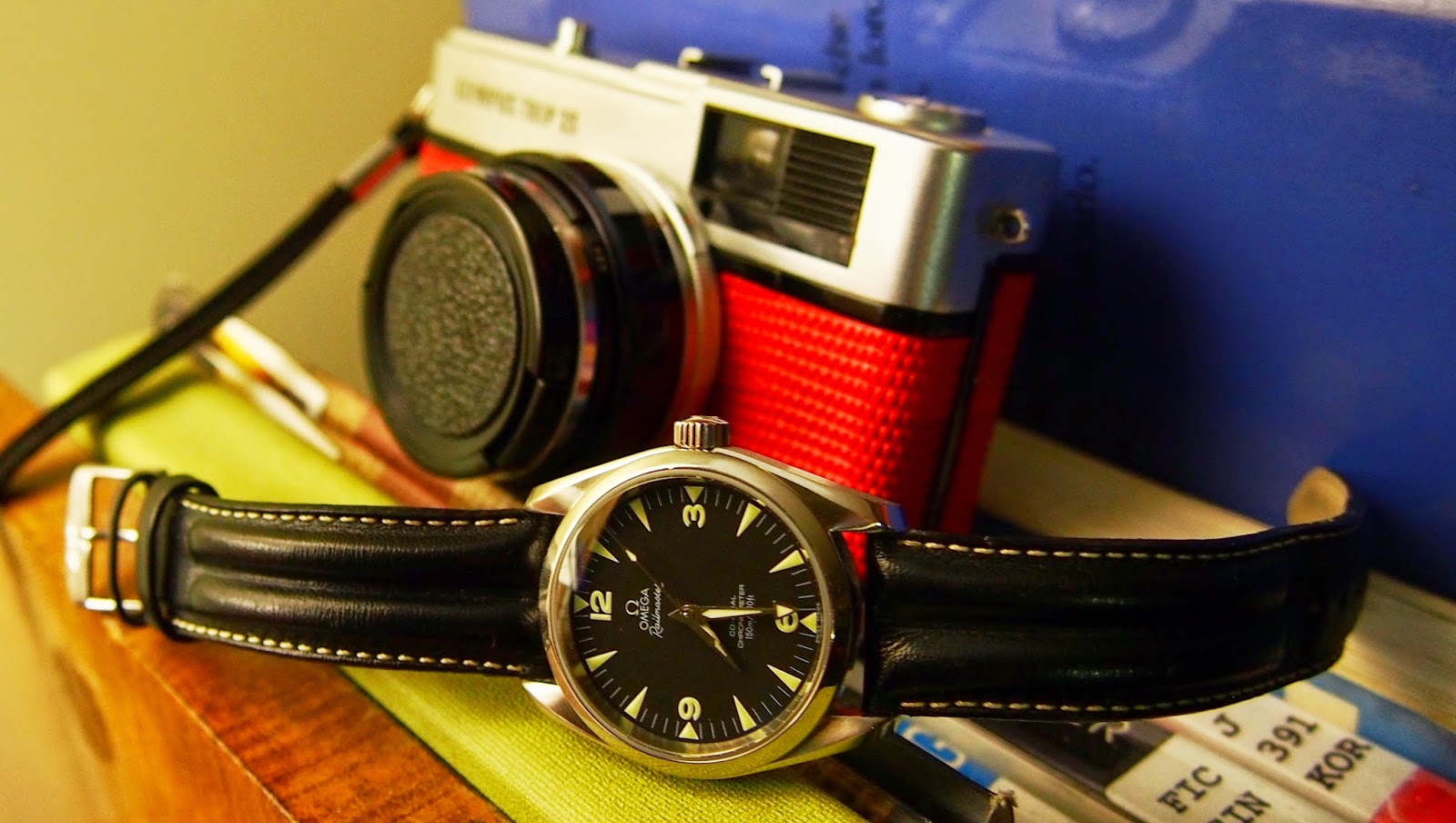 I must have been in a no-nonsense mood this week, since I stuck to one watch. I get like that sometimes. 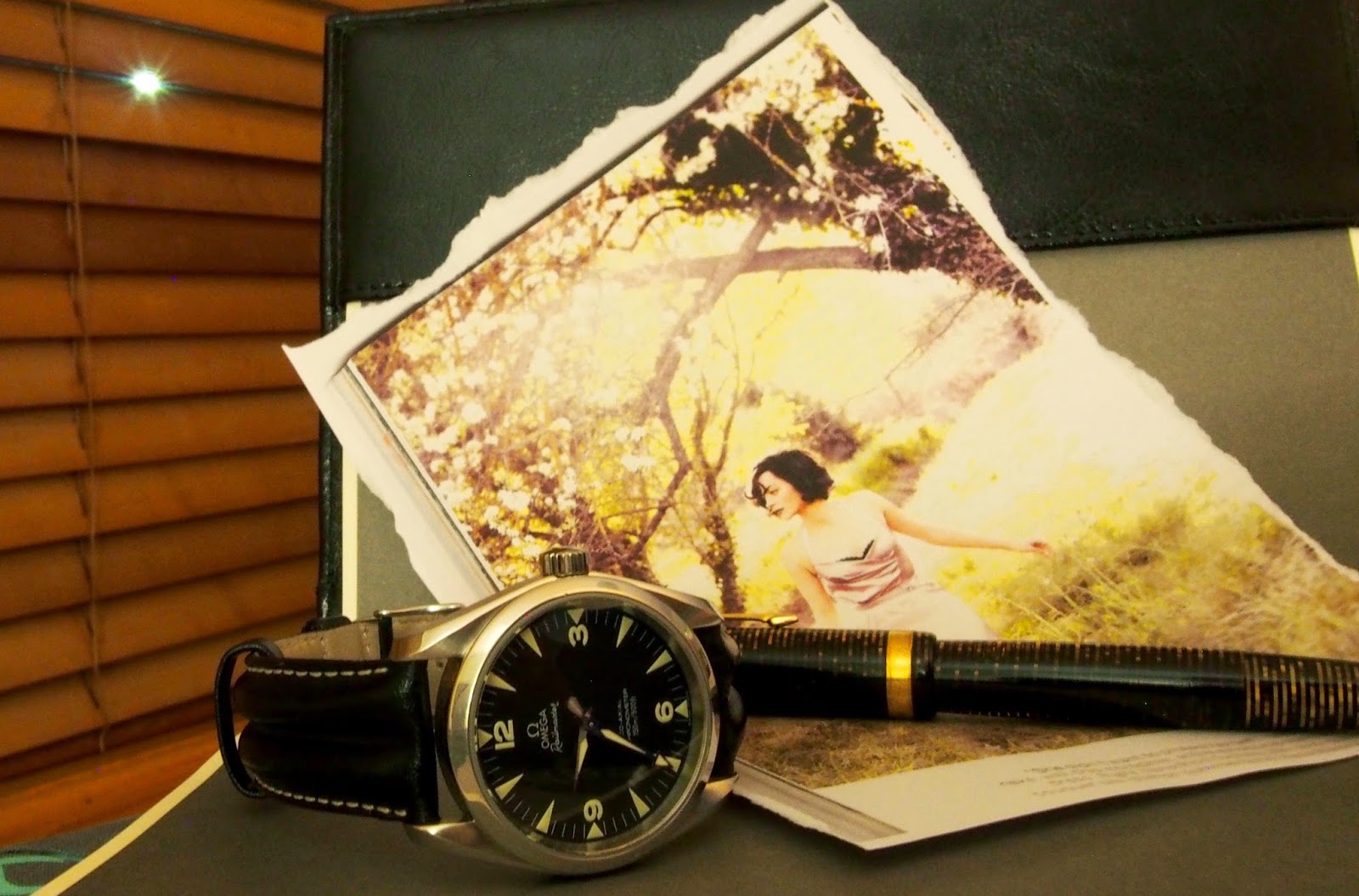 I love that photo of French actress Marion Cotillard, taken by the legendary Mario Testino for the July 2010 issue of US Vogue magazine. 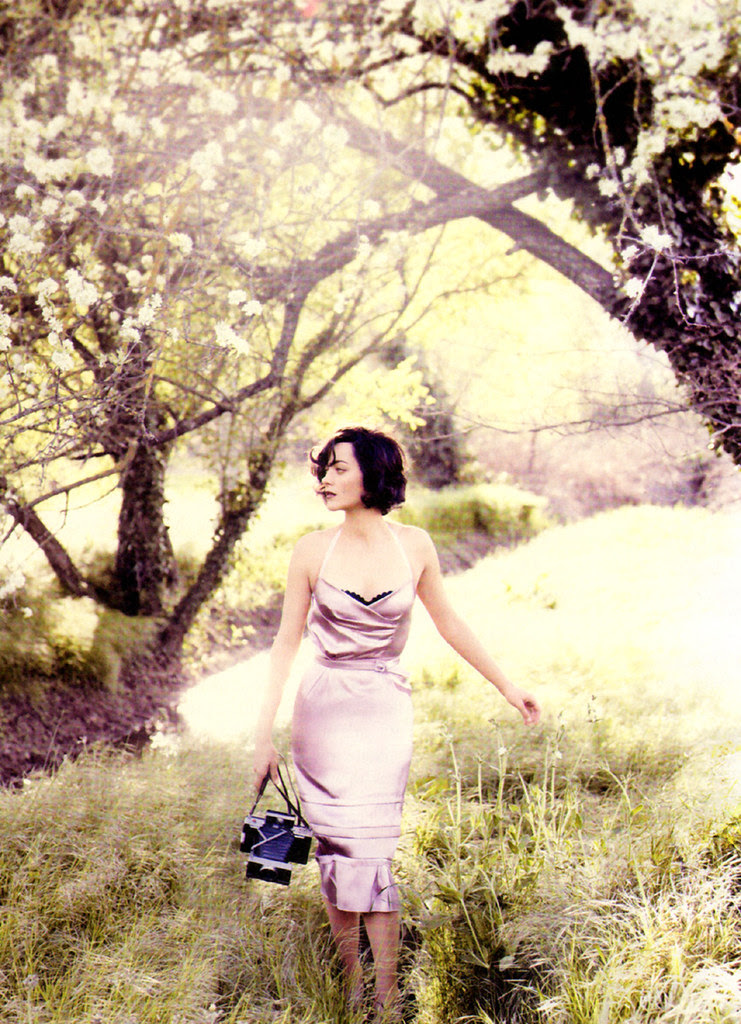 Her look in this photo shoot  (skin tone, hair colour & style, jawline, eye colour) always reminds me of my wife.

Thanks for reading and have a good weekend, all!
Posted by teeritz at 02:16