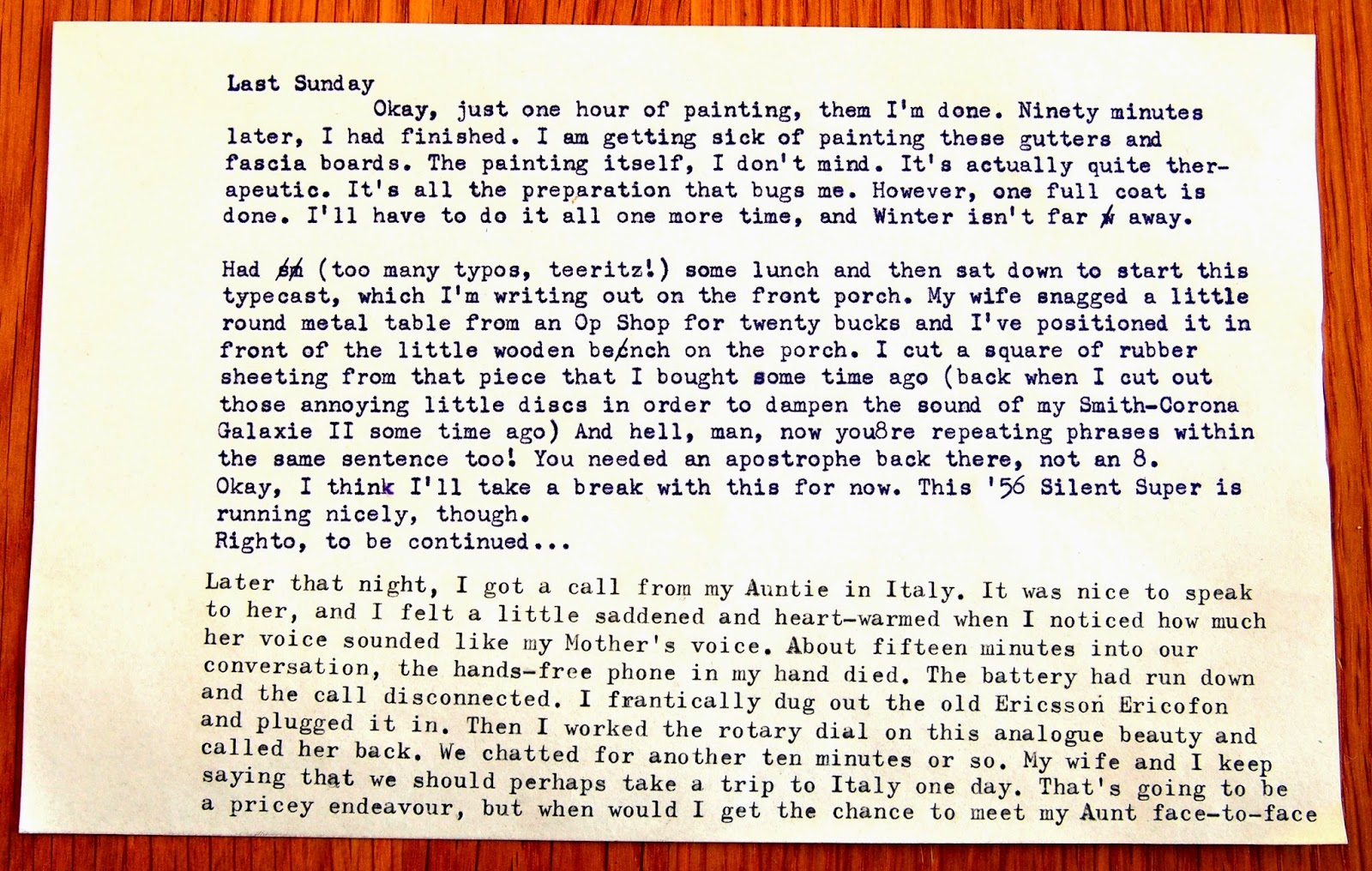 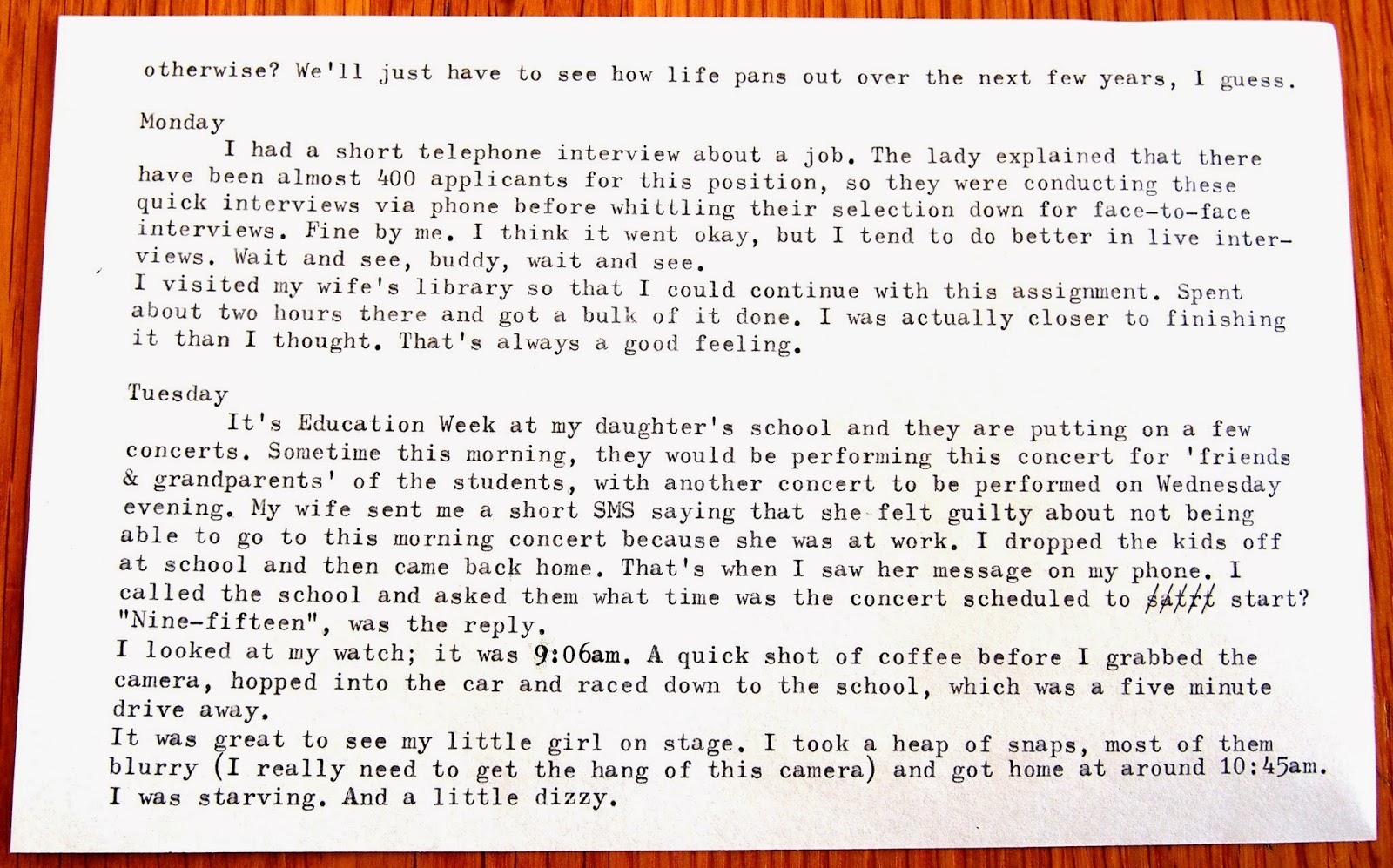 This modded Seiko 7002 has been getting some regular duty over the last few months. Only painted for a short time on Sunday. I really ought to get that paint can opener out of the rain.; 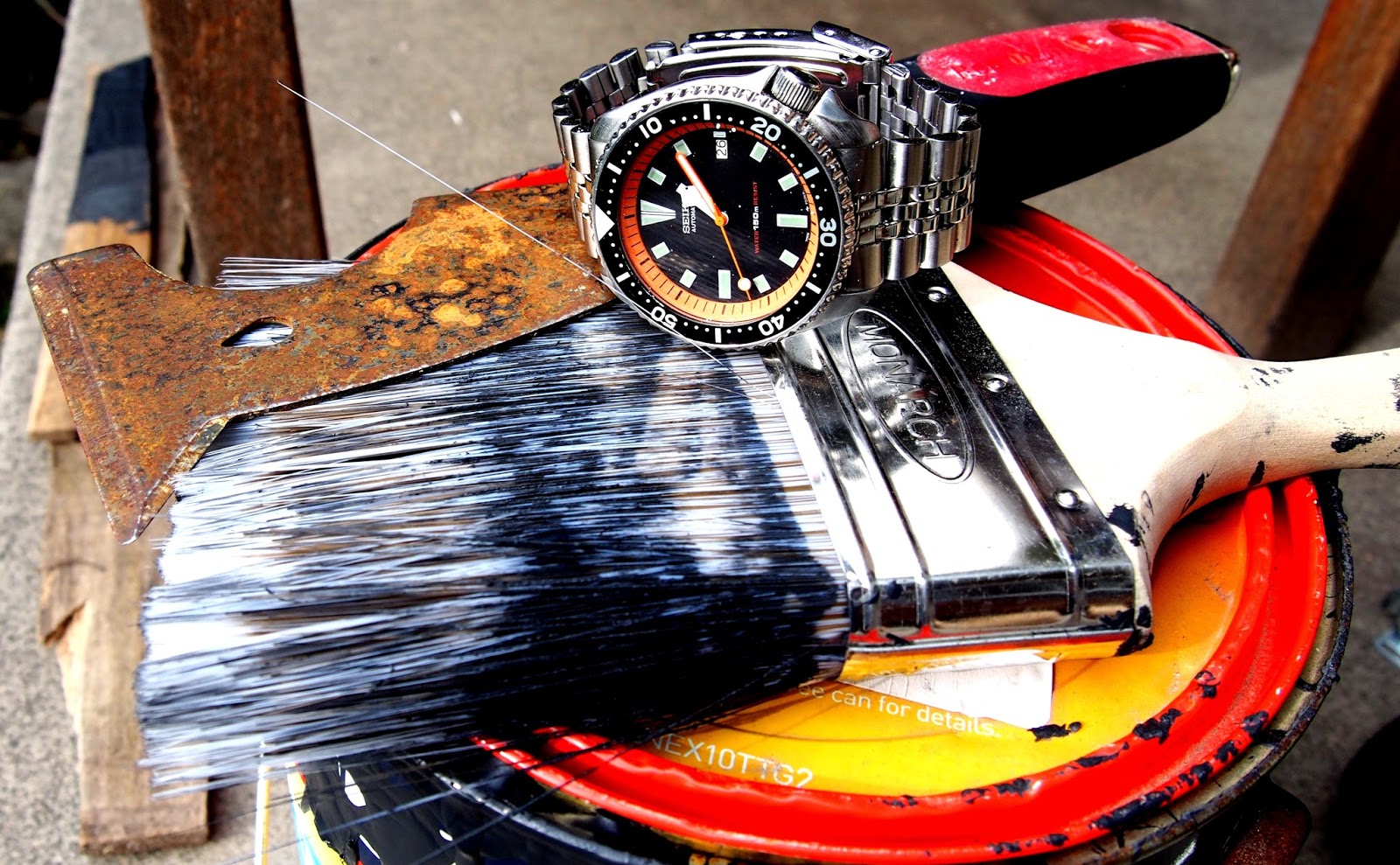 I changed out of my painting duds and got into some more civilised clothing. And back to the watch that I wore earlier, the Omega Seamaster AquaTerra; 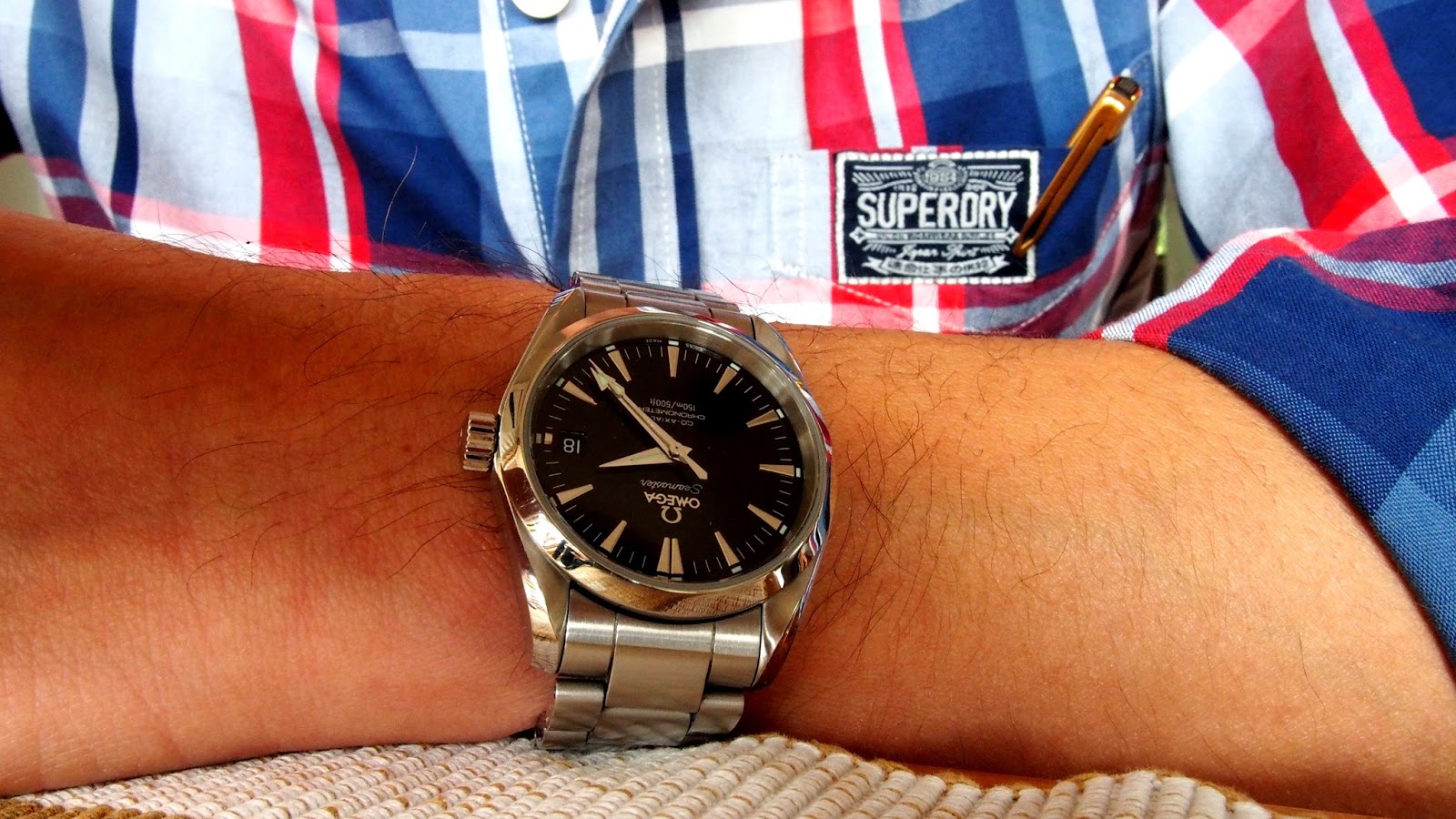 And then out came the '56 Smith-Corona Silent Super to hammer out part of the first page of the typecast up above; 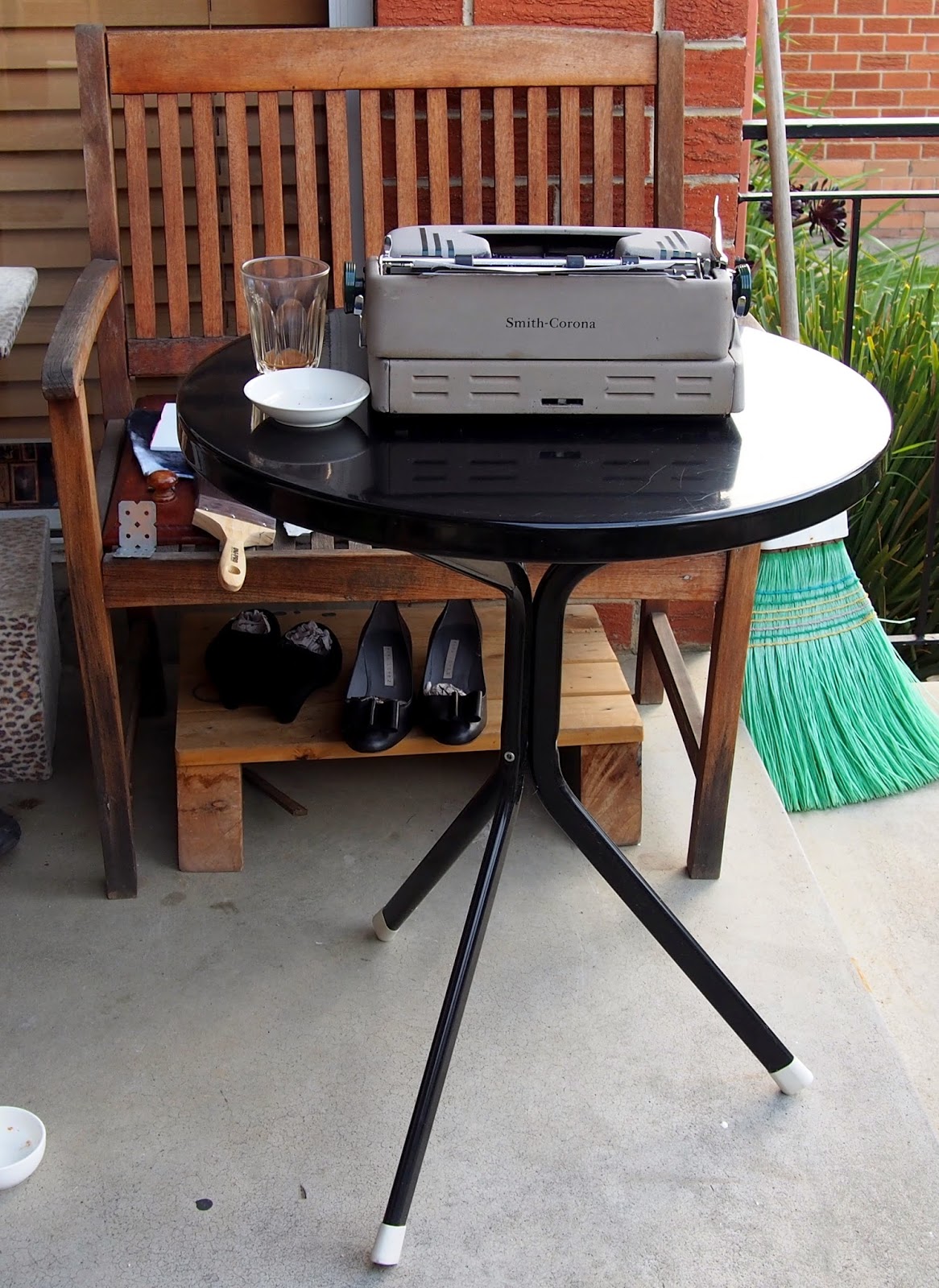 The cordless phone let me down on Monday night. Back to some analogue reliability, 1960s-style. 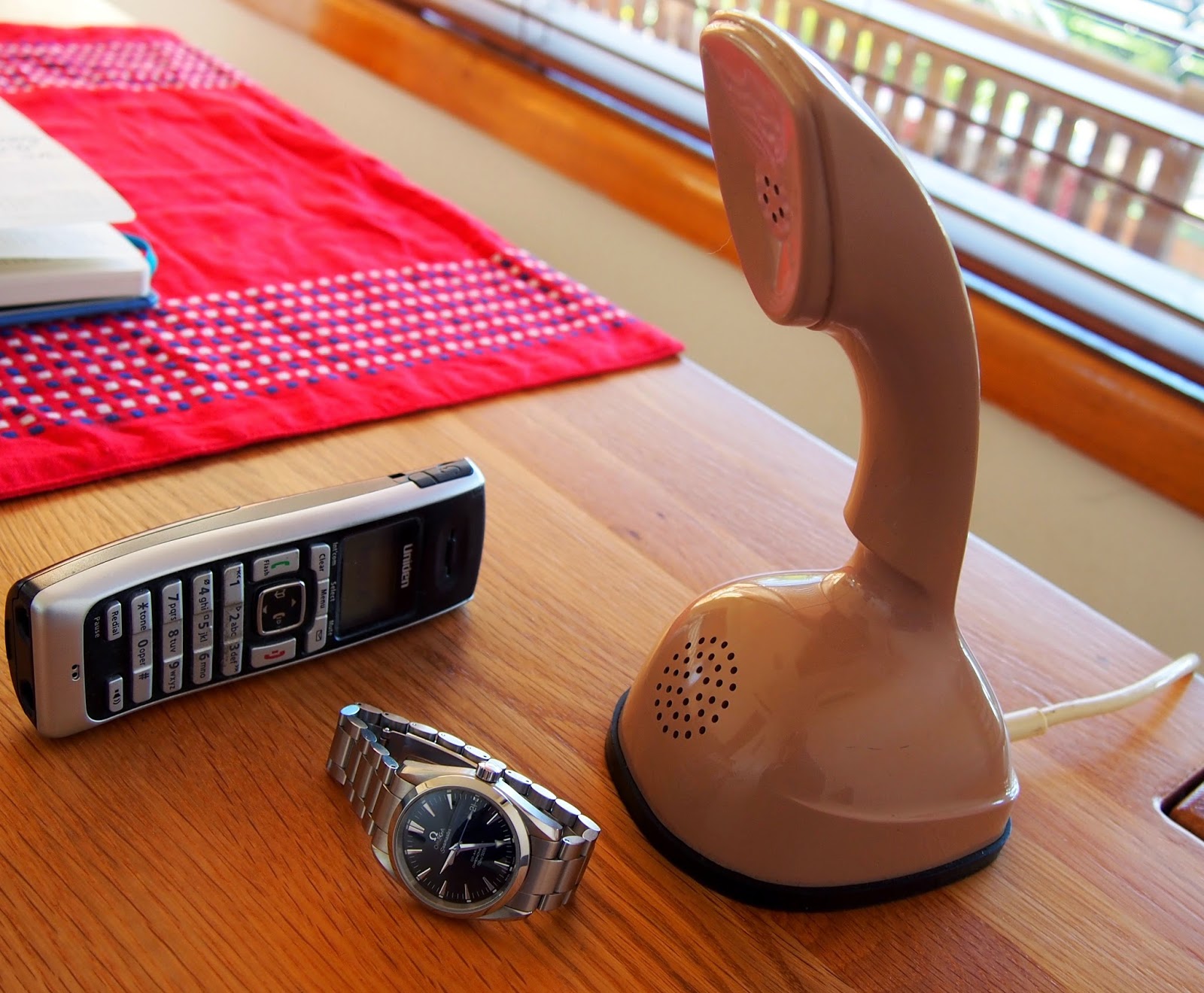 Wednesday's class. Got my result for Assignment No.1- twenty-three and a half out of twenty-five. Nice. We were also given Assignment No.4. This would be a group exercise and is due in two weeks where we'll be presenting our findings to the rest of the class. I teamed up with two ladies who are as interested in passing this subject as I am. As I have stated in the past, there are a few people doing this course that make me wonder why they are here. I noticed in today's class that I haven't seen three students for the past month. Looks like they may have dropped out.
When I got home, a message on the answering machine  stated that the coffee machine was ready to be collected. Good. I was getting tired of this view: 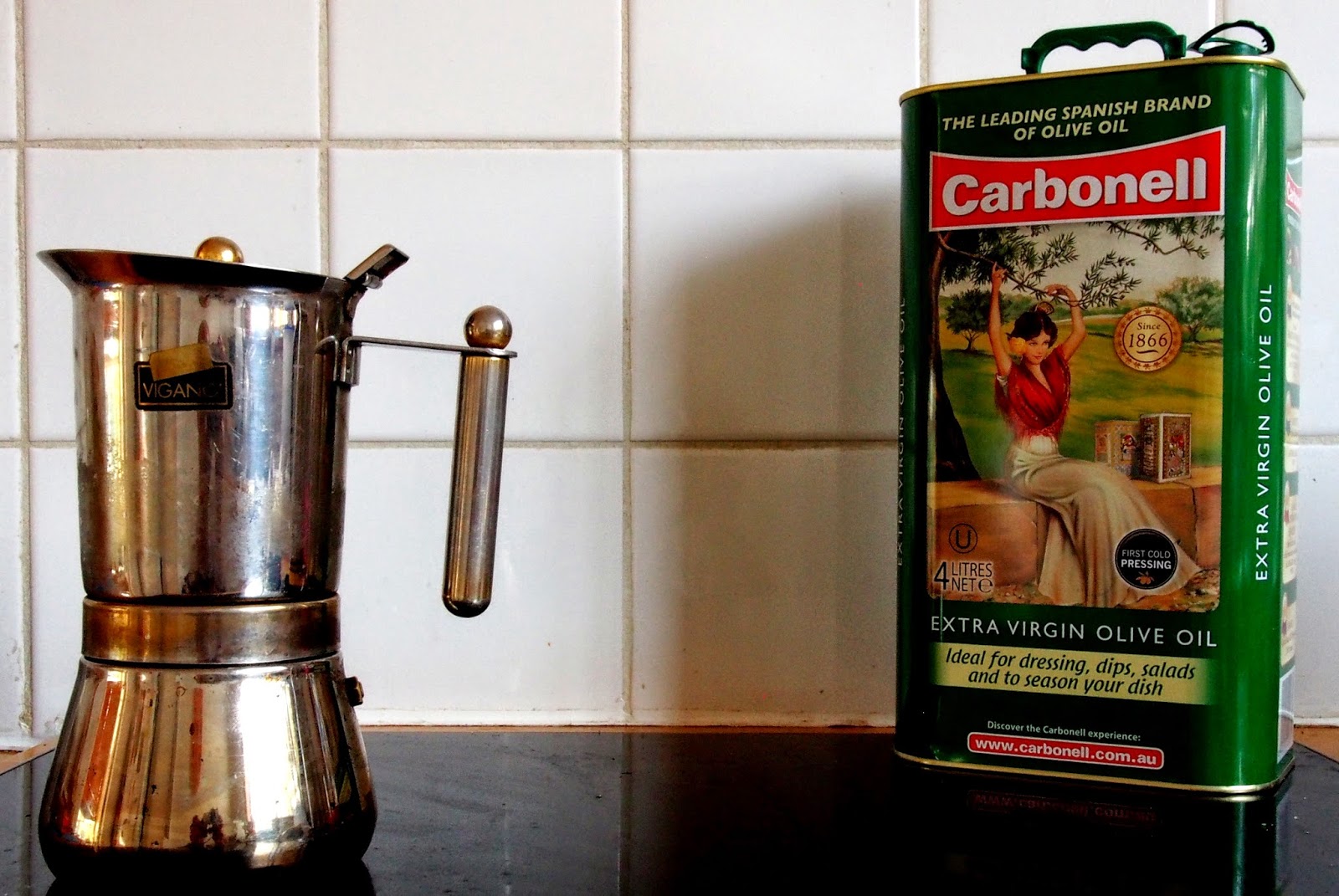 Don't get me wrong. This caffettiera has served us well over the past week, but it doesn't pack the same punch as espresso. I changed over to the circa 1969 Omega Seamaster Chronometer. As the weather cools its way towards Winter, I find myself wearing more of my dress pieces rather than sports watches.

My wife and I went to our daughter's school for the Education Week concert. When we got home, around 7:00pm, I began to feel a little cold. About an hour later, my nose felt blocked. Half an hour after that, I had a headache and was sneezing and reaching for the Kleenex. Damn!
Later, I grabbed the Vicks Vaporub, smeared some onto a couple of tissues, wrapped that in a handkerchief and went to bed holding this near my nose. That helped me get to sleep.
I knew a delivery driver who's cold and 'flu remedy was to get the Vaporub and coat the soles of his feet with it before putting on socks and going to bed. He claims his colds only ever lasted a day or two. I haven't tried this method, but I wonder if it would work?

Thursday
Dropped the kids off to school and figured I'd go pick up the machine. My head was splitting and the early morning rush-hour traffic had it in for me.
I got to the repairers just after nine am. The hours of operation sign on the door said they opened at 9:30. Swell. I looked around and saw a pharmacy directly across the road. Further down the street was a newsagent, and a few doors up from that was a cafe. Okay, I could easily burn half an hour, and I could really use a decent cup of coffee.
I made the mistake earlier this week of getting a coffee from a McDonalds McCafe near our house. My wife had gone there the day before, out of desperation, and she came home with two take-aways vowing to never go back there again.
"I asked them to make the coffees a little stronger and they said they'd have to charge me for two extra shots of coffee", she told me.
"Ahh yeah, that always confuses them", I replied.
All they have to do is let the machine run for an extra four or five seconds. That's normally enough to give a coffee a little more bite, but so many places nowadays insist on charging extra for a stronger coffee by adding an extra shot. This is unnecessary. For me, it's got nothing to do with paying an extra 40 cents. It's got to do with the fact that these 'coffee baristas' don't know what they're doing.
Back in the old days, if you asked for a stronger coffee, the dude (or dudette) behind the machine knew exactly what to do because they understood that running a little more coffee into the cup would alter the strength.
Today, nobody shows any initiative.
If it's not in the training manual, then it can't be done.

Anyway, I went to the pharmacy to get some cold & 'flu tablets. The Chemist asked; "Do you have any photo ID?"
Is it because of "Breaking Bad" that pharmacies now think that every customer wanting headache tablets must be running a meth lab?
My wife asked our local Chemist about this and was told that many pharmacies were getting the same customers buying aspirin and paracetamol tablets in bulk, up to two hundred tablets a month. This has led to a government initiative that requires photo ID to be presented. Fine by me, I suppose, but I get a little annoyed when I'm asked for ID.
I paid for my medicine and got out of there. I bought a newspaper and walked into the cafe. Nice and simple decor made up of '50s and '60s laminated tables with matching chairs. The kind of furniture that I grew up with and is now worth quite a bit to collectors. I ordered a caffe latte.
"Do you want it strong?", asked the guy behind the machine.
Oh, thank God!
"Yes, just a touch, thanks", I replied, knowing that this wasn't the kind of place where they'd have to think twice about how to make a stronger coffee.
The guy brought it over to me. He looked familiar.
"Say, did you ever go to ******** in Carlton?", I asked as I reached for the sugar.
"Yes, but that was a long time ago", he replied.
"Yeah, it was back when I still had hair and you had a mustache."
"Oh, gee, that was some time ago. When did you work there?"
"Ninety-three to ninety-eight."
"Wow, you've got a good memory!"

We chatted a little more before he stepped out to take another customer's order and I read through the newspaper. It was a good cup of coffee and I felt my headache slowly recede. 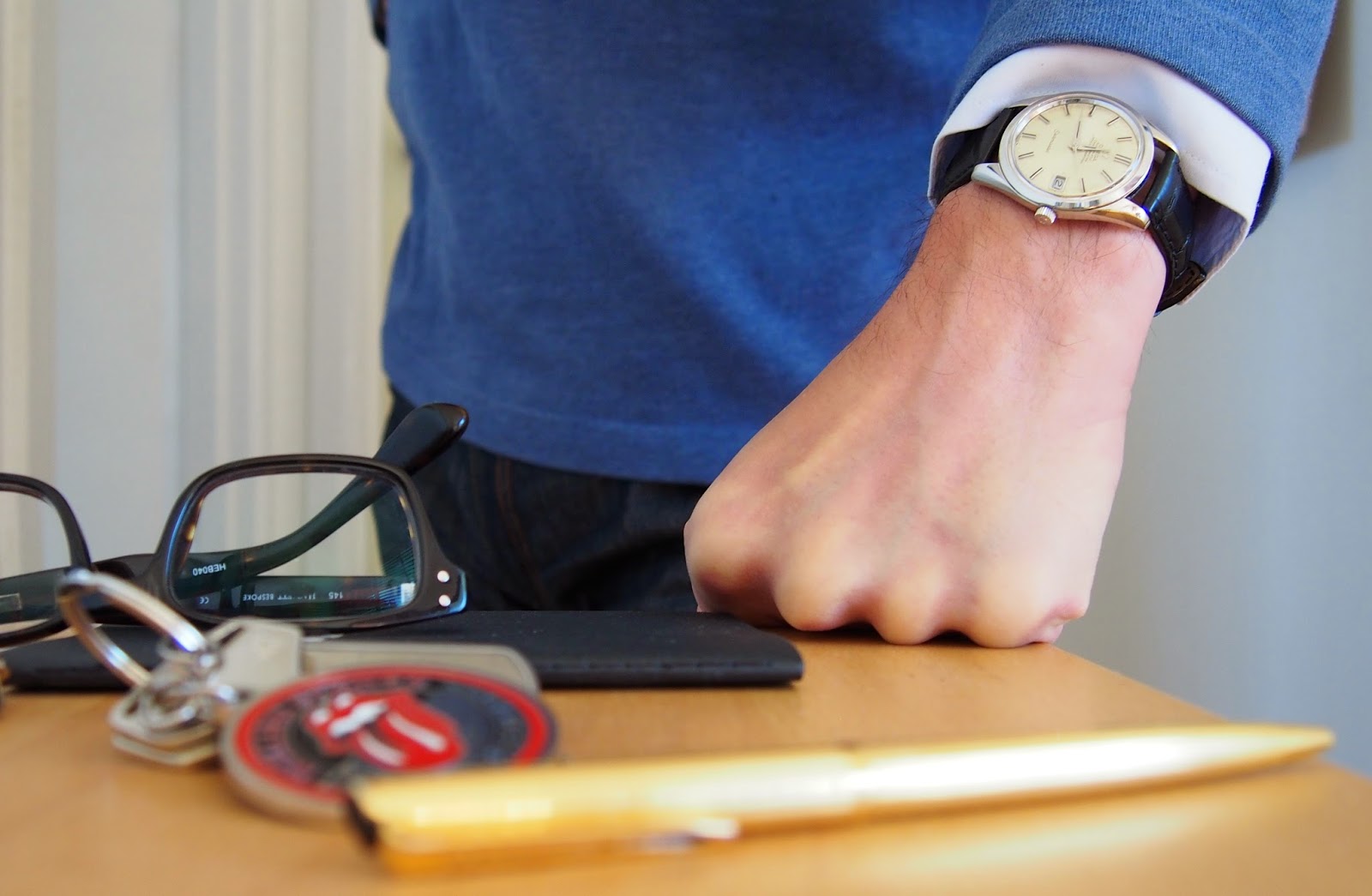 I checked my watch. Nine-forty am. Time to go get the machine. I paid for the coffee, thanked him, and left. A few minutes later, I was talking to the coffee machine repairer. He gave me some info about maintenance and I asked him a few questions. He wiped the machine down with a soft cloth as we chatted. This thing was looking brand new.
I paid for the repair, took the machine and headed back to my car where I put it on the passenger seat and strapped the seat-belt across it to ensure that it wouldn't bounce around or tip over if I took any sharp corners on the way home.
I was feeling better now than I did twelve hours ago, but decided to take it easy for the rest of the day.

Today
The kids were looking a little ragged 'round the edges last night, so my wife and I declared that today would be an Emergency Flop Day for them. Basically, they would stay home from school and just take things easy. Sure, they only had to get through one day of school before the weekend, but what the hell.
Anyway, the weather outside looks slightly miserable. It rained overnight and it looks quite cold outside, but I still might rug up and take the kids for a walk sometime today.
Other than that, not much else on the cards for today. I trust you'll all have a decent weekend.
And one more wristwatch change to usher in the weekend;

Thanks for reading!
Posted by teeritz at 17:41