It had been a long time since I had a pet. I said to my wife that we would maybe get a cat when we moved to another house. And not just any cat. Mild snob that I am, I wanted something a little more exotic. I wanted a Platinum Burmese.

So, about two years ago, I saw a cat skulking around in the field across the road from my house. I tried to call it over, thinking that all cats respond to the international "here, puss, puss, puss!" call that we humans use. They don't, btw.
This cat looked over at me, hissed once, and kept right on walking. Fine, be like that.

A few weeks later, my kids come running into the house one Sunday morning to tell me that there's a nice brown cat sitting in the neighbour's yard. "Can we pat it?", they asked me.

I went out there with them to take a look. It was sitting neatly in the neighbour's front yard, alright. The same cat I'd seen in the field a few weeks earlier. I edged close to it. It hissed at me. 'Yeah, that's the same cat", I thought to myself. My daughter ran back to our house to get the camera. Here's a pic of this cat hissing at me...again. 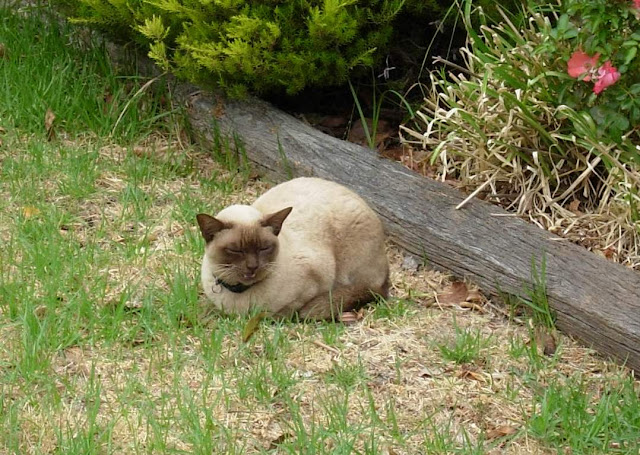 'That's gotta be a Burmese. I wonder who it belongs to', I was thinking to myself. It was wearing a frayed collar, but no tags. I crouched down a little nearer and it got up and came towards me and brushed past my knee. I patted it. So did my kids. After a few minutes, I said to the kids; "Okay, let's go. We can't stand in Jerry's front yard patting some cat all day."
We crossed the road to get back to our house, my six year-old daughter asking 83 questions, one of them being; "I wonder who's cat it is?"
I turned around to see this animal saunter across the road behind us, its tail swaying leisurely from one side to the other like a wisp of dark brown smoke.
'Uh-oh', I thought.

A few minutes later, my wife and I were looking at this cat as it stood on our front porch like it had been a part of our family for years and we wondered whether we should feed it something, since it looked a little thin and mangy. We opened up a can of tuna and gave it some. And then some more. The cat didn't seem to mind. 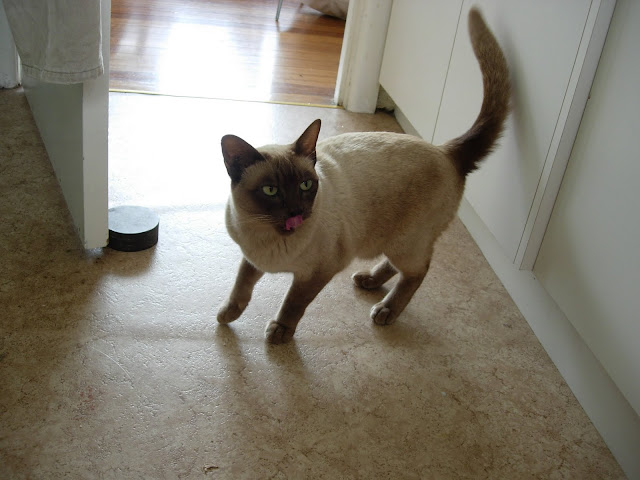 Okay, the next thing to be determined was whether this cat was micro-chipped or not, so that we could find its owner. So we took it to a nearby animal hospital. The vet checked it out. It was a Burmese female ( I gave my wife a light tap on the arm to say "See, I told you it was a Burmese"), about a year old, and it had been spayed because it had the little tattoo marking located in one ear. He waved a micro-chip reader over the cat and was unable to find a micro-chip. "That's odd. No chip, which is strange. This is an expensive animal,
so I'm surprised that it hasn't been chipped."
He surmised that it may have been dumped. We asked him what we should do next and he suggested that we contact our local council.

We called our council and also put up leaflets and did a letter-drop as well. The council said they'd report it on their website and if nobody claimed the cat within eight days, we had the option to take the cat to a shelter or keep it.
A week went by and we heard nothing. A few days later, we called the council. They told us that they'd picked up 3 or 4 cats from our area, but nobody had come forth to claim this cat. "What happens now?", I asked.
"Well, you can take it to a shelter or it's yours to keep if you want."

It seemed a shame to take it to a shelter and getting a cat so soon was not really part of my game-plan, but this was a very friendly and personable animal so I decided that, since karma had allowed me to cash in a few chips by sending me this cat, I was going to keep it.
"Why don't you try wishing for a million dollars, next time", my wife said to me.
Okay, so it wasn't a Platinum Burmese, it was a Brown (or Sable) Burmese. Beggars can't be choosers.

Next, she needed a name. Originally, it was Latte, because of its two-tone shades of brown, but I felt that was a little pretentious. So it was up to the kids to come up with a name. And this is what they gave me;

Baby
Coco
Cointerpin (????)
Dussy
Goodjiibubble (????again)
Wispy
Bubby
Dewey
Geez, guys, just ONE name will do.
﻿
So we settled on Wispy because her tail sways like a wisp of smoke, although the kids still call her Bubby and I've come to call her Dussy or Madame or Furbag. Doesn't really matter. She doesn't come over when you call her anyway.
I sometimes call her Naomi Campbell because only someone this good looking could get away with the things she does.
Here's the pin-up shot. 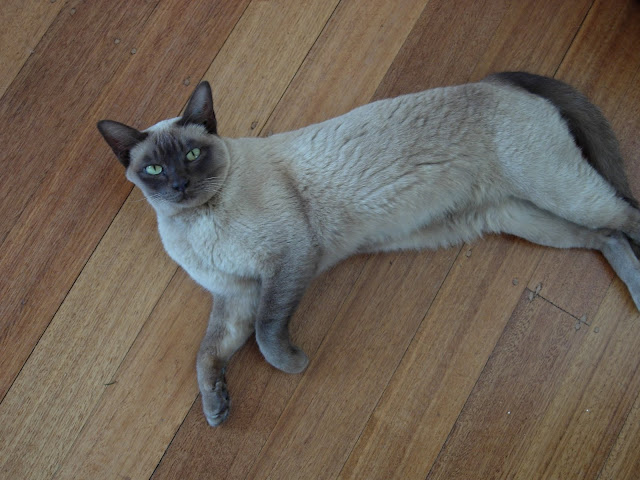 Mind, you, we'd all look this good if we slept up to 18 hours a day.
(It wasn't easy nailing her to the wall to take this picture, btw. Joking.)

We got her micro-chipped and she was given a clean bill of health. That was two years ago and although she does a lot of eating and sleeping, she's become a treasured member of the family. 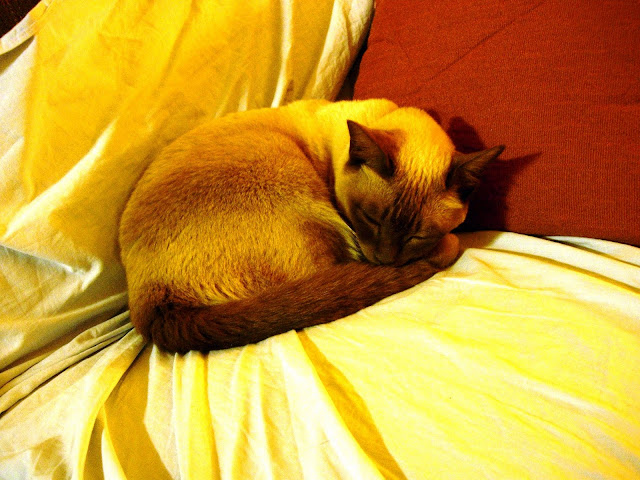 Thanks for reading...like she cares.
Posted by teeritz at 18:48