I've been busy in recent months since my job went full-time. As such, there have been weeks where I've gotten home from work on a Friday and haven't had the steam to write these weekly posts.
So, I'm not sure if I'll keep it up with writing one of these each week. I've also found that, because these posts are written in one hit, I'm never really satisfied with the finished product, which is essentially a first draft.
Anyway...

Picked up the new car a couple of weekends ago. By new I mean a 2006 model Mazda 3. Sure, it's now a ten year-old car, but I have to say that it drives pretty slick.
Considering that my previous vehicle was a '93 Toyota, I freely admit that I've never kept abreast of new car technology over the years. My Toyota didn't have airbags or ABS brakes. I must have missed some of the main changes that have occurred in the intervening years.
Therefore, this new car has required that I re-learn some driving techniques. The power steering is very sensitive and the gears and braking system are considerably more responsive than I'm used to. Still, I've stuck to being a cautious driver while I get the hang of this car over the coming weeks/months.
It's also pretty tidy for its age. The previous owner really looked after it. Let's see if I can do the same. 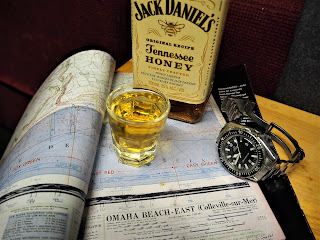 I wore the Omega Seamaster 300  sometime in the last two weeks.
Don't let that pleasant yellow label fool you, kids. That Jack Daniel's Tennessee Honey Liqueur packs a slight punch every sip you take.
I've noticed that I'm mainly wearing sports watches lately. Not sure why. Might try a vintage dress piece soon, for a bit of a change.
The weeks have begun to blur a little in recent months. Can't believe we're already in the third week of July.


And why not throw in another shot of the SM300? 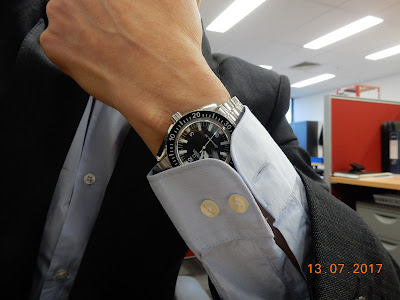 I caught up with an old friend of mine a couple of weeks ago. Having recently set up an Instagram account (again...and I'm not really sure why), I somehow popped up on her Instagram feed. How she figured out Teeritz was me I'll never know.

Must say I find it all a little nefarious the way internet algorithms work. I can only surmise that the world wide web (anybody still call it that?) somehow found a link from my email account, since she's listed in my address book on Hotmail, and linked it to her Instagram feed. Yes, that's right. I said Hotmail. Still use it, still like it.
The cat situation remains tense. Madame still hisses whenever The Little Guy gets too close to her. She runs off. He thinks it's a game (I assume) and chases after her before she turns and hisses some more. I have to say she's showing this newcomer some absolutely dreadful manners.
I wore the Omega Railmaster at some point; 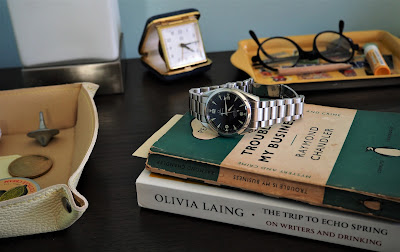 Decided I was overdue for a little bit of Chandler. I'll Be Waiting is perhaps my favourite of his short stories. It concerns a hotel detective named Tony Reseck, who spends the quiet evenings in the lounge down in the hotel lobby listening to classical music on the radio.
One night, he finds a lady in the lounge, curled up in an armchair listening to jazz on the radio. They get to talking. She's waiting for a guy. A guy who's only just gotten out of prison. She helped put him there. Reseck gets a message from his brother Al, a fella who moves in shady circles. Get the girl out of there. Her ex-boyfriend's coming for her, is the gist of what he says.
There's a little more to the story, pal, but I ain't here to wreck it for ya. 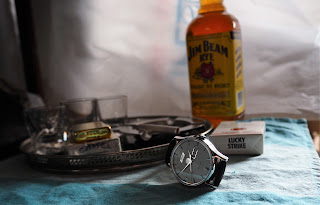 As I continue to get ticked off about Photobucket's recent dirty-pool behaviour, I spent a sizeable chunk of my spare time re-doing my watch review photos. I downloaded them off my Photobucket account and saved them to my hard drive. Then I deleted the Photobucket folder. I had already tackled the Omega Railmaster. The Tissot Visodate review was next. As I read through the review, for the first time in a long time, I decided that one or two new pictures were required. So, out came the camera and some props. It's not a perfect photo, but I was aiming to get the logo lit up on the dial, hence that circular reflection in the middle of the watch crystal.
This review is located here on my blog and also on a wristwatch forum. However, I can't edit the forum review, so I figured I'd just tidy up my own one here. Shame, but that's just how it goes.
Bit by bit, I'll save any worthwhile pictures, but I have to say that quite a few of my posts on this wristwatch forum are now littered with the Photobucket logo requesting me to upgrade my photo storage plan. Ain't gonna happen, folks.
Of course, after spending an hour or so taking pictures of the Visodate, I decided to set the time and date on it and wear it for a few days. 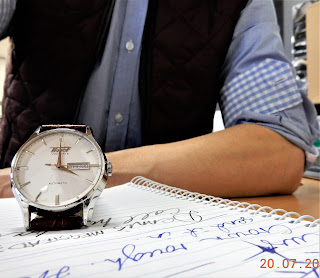 I wore it until yesterday. Once I got home from work, I switched over to the Omega Seamaster 300M Professional. This is another watch that I haven't worn for some time. I purchased it in 1999 and only got it serviced for the first time earlier this year. While the overall design of this watch has dated over the years - it was first released in 1993- its strong Bond connection kept sales chugging along nicely over the last couple of decades. 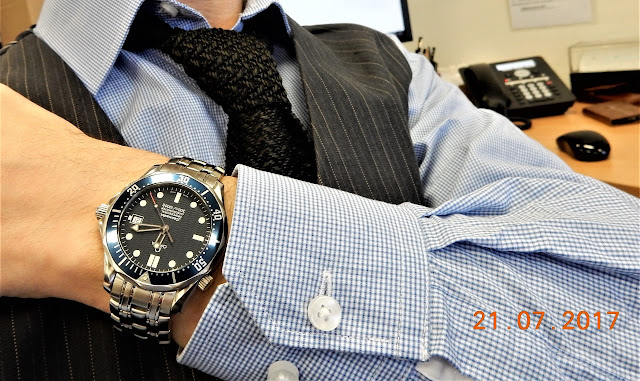 See that knitted tie? It's silk. Cost my wife a whopping 99 cents from a nearby Op Shop (thrift store). I got home from work one day last week to find it rolled up and sitting on my bedside table. I unrolled it and checked the label - Emporio Armani. Holy mackerel, some guys get rid of some nice stuff. This would have been quite pricey when it was new. And knitted ties never go out of fashion.

Anyway, I've been hearing the older cat making some low rumbles every time the new kitten streaked past, so I think I'll call it a day here.
Have yourselves a great weekend and thanks for reading!
Posted by teeritz at 04:15