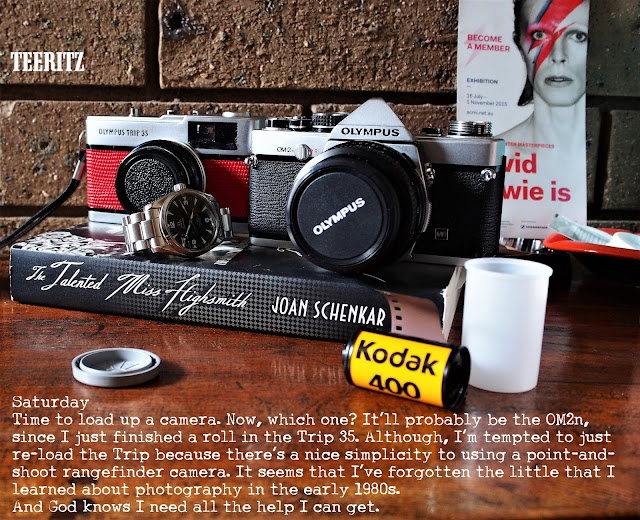 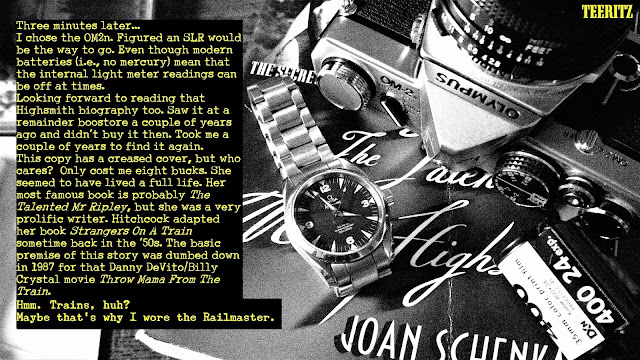 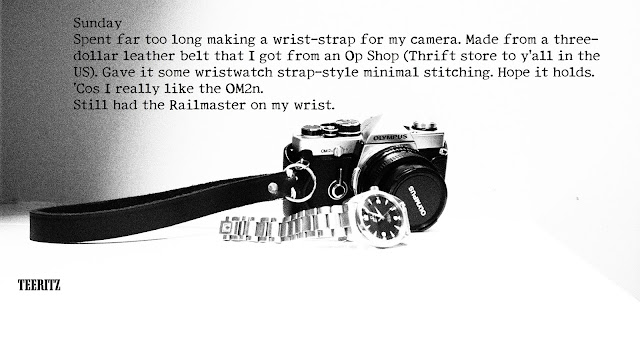 It was a busy week at work as I tackled a bunch of admin tasks. Processed a bunch of outgoing spare parts, then processed a bunch of spare parts coming in, updated (actually, I created) the warranty database. Brother, that took longer than I thought it would. And then there was the flood of e-mail enquiries that had piled up over the Easter break. That chewed up most of Tuesday. 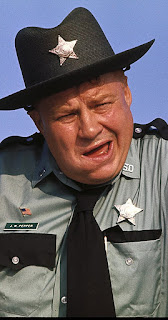 I was saddened to hear of the death of character actor Clifton James. He starred as Sheriff JW Pepper in the first Roger Moore Bond film, Live And Let Die (Dir: Guy Hamilton, 1973). While it was by no means anywhere near a great Bond movie, and James' portrayal of JW Pepper was cliched caricature, he nevertheless gave us a funny character, playing the part as a bigoted Southern lawman ("Step out of the vee-hickle.") which probably paved the way for the likes of Jackie Gleason in Smokey & The Bandit and Sheriff Roscoe P. Coltrane in the '70s tv series The Dukes of Hazzard.
As a (very) young movie-goer in the mid-1970s, I found his role in this OO7 film a highlight. It was quite a few years later when I saw him on-screen again in a scene in Brian Di Palma's The Untouchables (1987).
Clifton James made it to the ripe old age of 96.
Gotta hand it to him for that alone. 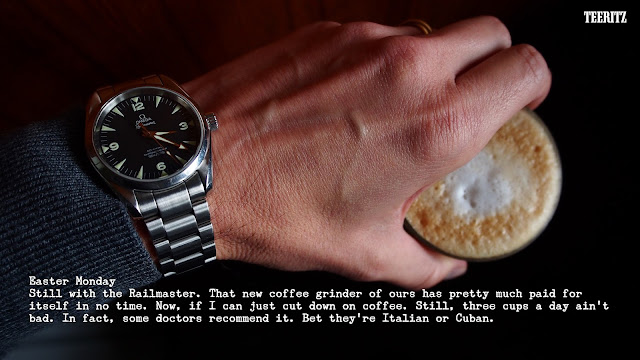 By Monday, I was beginning to lose track of the days. Always happens when a public holiday falls on a Monday. It'll happen again next week as Tuesday April 25th is ANZAC Day here in Australia, where we commemorate the efforts and the lives of those who served in the armed forces of Australia and New Zealand. 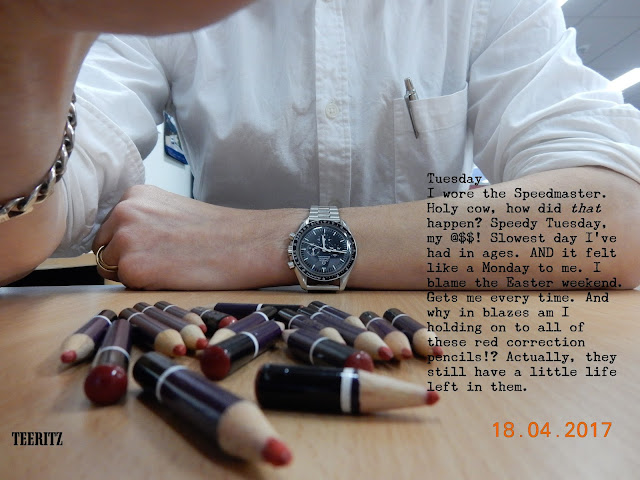 Speedy Tuesday was first started by a wristwatch blog some years ago. The regular writers (from my understanding) would put up a random photo of an Omega Speedmaster every Tuesday. Soon, it began to appear on various wristwatch forums, where members would post a picture on a Tuesday of a Speedmaster on their wrists. It has become something of a phenomenon in recent years. So much so, that Omega has produced a limited edition Speedmaster Professional, to be released later this year. 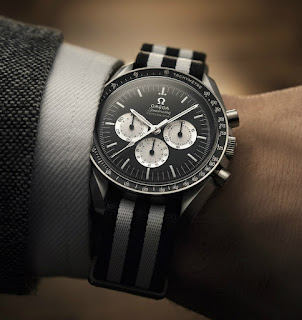 Here it is, over on the right ---->
You can read all about it if you tap on the link below;
ablogtowatch.com | Omega Speedmaster Speedy Tuesday Limited Edition

I think the watch was available for pre-order and I think it may have sold out already. It's due out sometime later this year. I have to say that I do like the reverse-panda dial. A panda dial is where the watch dial is usually white and the chronograph sub-dials are black, thereby mimicking the colouring of a panda's face.
A reverse panda dial is where the colouring is uh, reversed!
It definitely makes for a sportier look.

I had a Breitling Shark Chronograph back in the late 1990s; 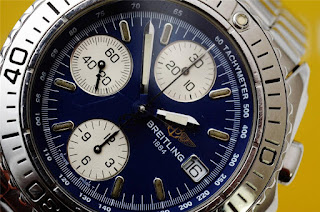 It served me well, but I did find that, if the hands were positioned in front of the sub-dials, at-a-glance readability went out the window.
So basically, at 8:45, midday/midnight, and 6:30, the hands would 'disappear' if you happened to look at the dial quickly. Or, they did for me. Maybe my brain was too slow to process what my eyes saw.
I was working in hospitality back then, and there were times where you felt like you only had a split-second to glance at your wristwatch. Especially if you were chained to the coffee machine and were cranking out cup after cup after cup. 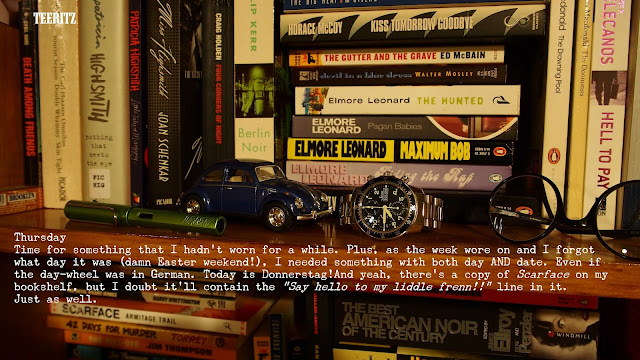 Thursday felt like a Friday. I hate it when that happens. I get half-way through the day thinking here comes the weekend only to suddenly remember that I still have another day to go before Saturday rolls around. Still, not the end of the world. 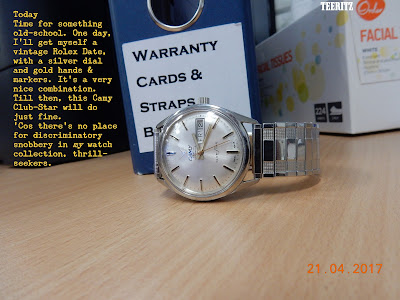 And so endeth another week. I got paid today, so now all I have to do is pay a bunch of bills and squirrel away some dough for the next stage of my root canal in June.
Once that's done, it'll be time to save for a new car. Nothing fancy, just an eight or ten year old Mazda or something. I've had my 1993 Toyota for almost ten years and I think it's reaching its end-of-life. It has been a very reliable car, I must say. Not exactly glam, but it has never let me down and it's been economical to run and maintain.
A flashier car would be nice, but I don't think I'm quite ready to spend big bucks on something newer and European. One day, perhaps. Although, I don't know if I could be bothered with the cost of parts and pricier upkeep that would be involved in maintaining an Audi or a Merc.
My attitude towards cars has changed somewhat since my carefree twenties.
Right now, though, there are other things to concentrate on.

Thanks for reading, all, and have yourselves a great weekend!
Posted by teeritz at 05:03