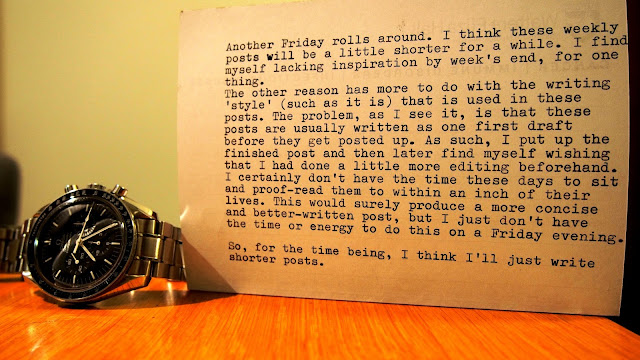 I had the Omega Railmaster on last Saturday; 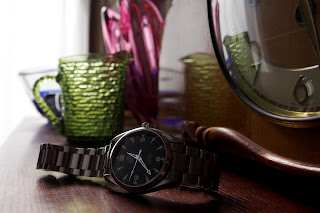 Switched over to the Sinn 103 St Sa chronograph later that day; 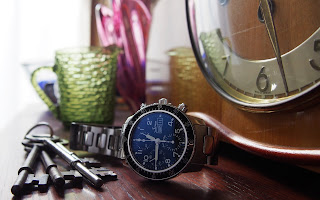 Work has been a little busy this week and it's moving along okay. Just as well because the household admin has been a little nerve-wracking, to say the least. We are in the process of renewing our passports and it's all proving a little more convoluted than we thought it would be.
My wife headed into town this morning to deal with some of it. She decided it would be more expedient to take the train into the city rather than drive. I knew she would be in for a surprise when she boarded the train and took a seat. Basically, she was the only person in the carriage who was actually reading. Everybody else on board was absorbed with their smartphones. She told me that even those who weren't actually using their phones were just sitting there, clutching them close to their chests.
"Apalling, isn't it?", I said after she recounted her experience.

I switched from the Sinn 103 to the Omega Speedmaster Professional early in the week; 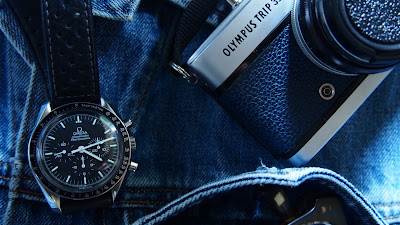 I wore it on the Di-Modell Rallye strap, to give it a slightly more vintage vibe.
I had this watch now since 2007 and it's been a very reliable wristwatch, to say the least. Sure, there are things that it cannot do, like take a dip in a pool- even though I know some owners who have worn this watch underwater- and the Hesalite crystal isn't as resilient as sapphire crystal and will crack if you hit it hard enough. However, this watch's reputation and history speak for themselves and this watch gets a lot of respect among watch collectors.
Back in the days when I used to sell watches, an elderly couple entered the store and the gentleman began removing his wristwatch as he approached me at the sales counter. He was wanting to have his watch serviced. He held out his watch, and as I reached for it, I could already see that it, like its owner, had lived a life.
"Oh, wow, this is a nice watch, sir. How long have you had it?", I asked.
"I bought it in 1969. Since then, I've always gotten it serviced when it needed it, and I've replaced the glass on it four times. It's never let me down, and it's the best watch I've ever owned", he said, while his petite wife stood next to him with a kindly smile on her face.
I listened as he spoke while I ran a fingernail along the edges of the case, aware that these edges had been worn down by four decades of wear and four decades of experiences. The Hesalite crystal was slightly hazy in parts, but still intact. The dial was still a charcoal shade of black, but the hands and markers had taken on that wonderful patina that occurs over time as the luminous Tritium compound begins to degrade due to regular exposure to UV light. Collectors pay top dollar for this kind of wear. The Tritium, no longer chalk-white, has faded to a pale shade of Swiss-cheese yellow/cream. Modern watches use a compound known as SuperLuminova and no matter how much exposure to light, it will not fade to this same rich hue.
I took the gentleman's details and booked the watch in for repair. After he and his wife left the store, I picked the watch up and gave it half-a-dozen winds by hand. The crown turned as smooth as butter. This watch, like its owner, had lived a life.

Six months or so later, a younger man came into the store to get his Omega Speedmaster serviced. He handed me the watch. He'd had it for less than ten years and it had seen better days. He went on to tell me that he worked as a builder and wore the watch daily. Not only that, but he was currently working on a building project located 60 kilometres from his home and he RODE A BIKE to work each day! Wearing this watch! The case and bracelet were heavily scratched, the crystal had some large scuffs and scratches across it, and the watch was a little hard to wind. It looked perfect!
I booked this one in for repair and, after the guy left, I had another look at his watch. It had taken a beating, but it was still running. These two tales illustrate two vastly different ways to treat a wristwatch and are testaments to just how rock-solid the Speedmaster Professional is. 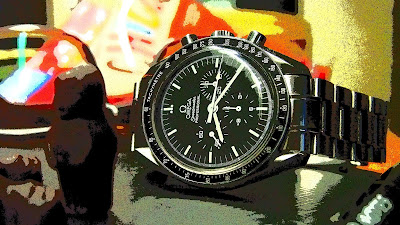 Left work early to get to a dental appointment. I was having a crown fitted. Got home and switched back to the Railmaster; 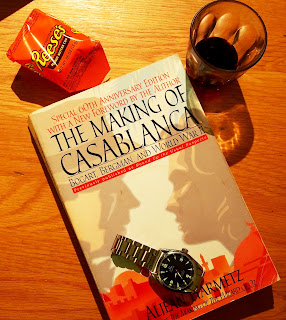 This book arrived from eBay earlier in the day. It was first published in 1992 under the title Round Up The Usual Suspects, but this here copy is the 2002 edition with a more straightforward title. I had a quick look through it and read the author's preface. This is, from what I can see, an exhaustively researched book. Looking forward to reading it. I also have another book, Casablanca- The Script & Legend, on its way as well. That should take care of any and all Casablanca-related reading material.
Not sure if Reese's Peanut Buttercups and a 2013 Cabernet Sauvignon are a good mix, but I didn't experience any stomach upsets.
Speaking of eBay purchases, I waiting on a Tower Chieftain III. I already have a Smith-Corona Skyriter, but if this Tower version ends up being a nicer writer, then the Skyriter will go.
Looking at the Tracking details of the Tower, it's already passed through Kentucky, Ohio, and Arkansas. Bit of luck, I'll have it before month's end. Hopefully, it won't have gotten bounced around too much during its travels.

Another week down. You'll notice that I'm posting on Saturday, despite having written the above typecast on Friday night. I just ran out of steam while I was putting this post together.
These things happen.

Okay, I'm gonna wrap things up now. We have a dinner booking at a Turkish restaurant later this evening. It's a belated celebratory dinner for my wife's birthday of a few weeks ago.

I hope your weekend has gotten off to a nice start, all, and thank-you for reading!

I'll leave you with one more shot of the Railmaster, from the archives; 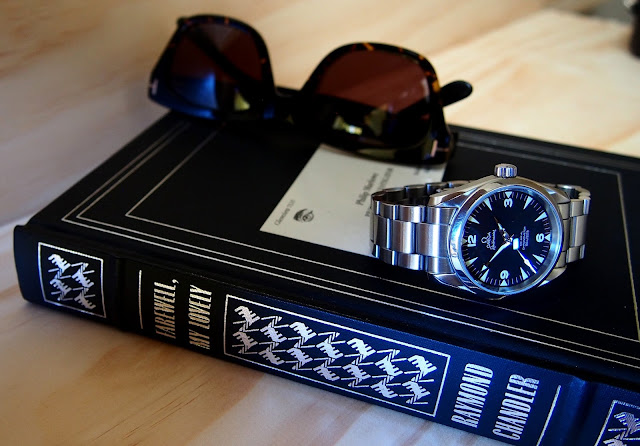