Since I began this blog in May 2011, I've changed the banner picture at the top of the page each year. My first attempt was pretty basic. The photo consisted of nothing more than the edge of a typewriter, a couple of my wristwatches, a fountain pen, and a snippet of text from one of my Bond fan fictions. This, to me, seemed to give a good representation of the things that interested me at the time and I felt it would be cool to have a picture at the top of my blog.
I soon ran into some headaches when I uploaded the picture and found that the blog title overlapped into the darker portions of the photo, thus obscuring some letters of the title. So, some strategic placement of items in the frame was required before I made my next attempt. I had to leave a large portion of the photo blank so that the blog title would remain clearly readable. I had a nice, bold upper-case block letter font for the title, and I gave it an italic slant to give it an airport thriller kind of vibe. Here's the photo that I used;

And here's how it looked once it was uploaded onto the Blogger layout template;

It was a pretty amateurish attempt, but it did the job. I used an old manila folder for that creamy background, but neglected to position it correctly to hide the surface of the table underneath.

I left this banner up until early 2013, when I decided to take another crack at it. Took way too many photos before settling on one that I liked. I had my new Olympus EPL-5 Micro 4/3rds digital camera and this thing has some great effects settings in its Art Filter mode. So, I set the camera to 'Key Line' and got a nice, cartoony result. Here's the Italian version, courtesy of Google Translate; 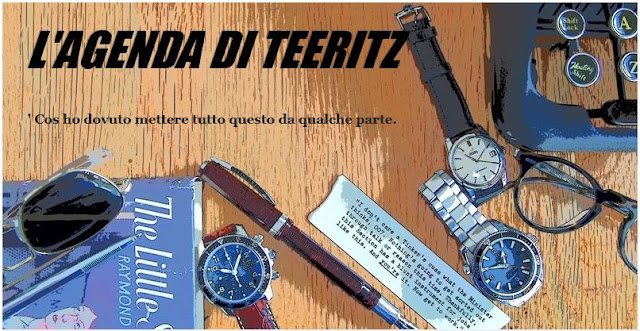 Again, I had to keep a portion of the frame empty so as not to obscure the title, but I suppose that's part of the fun in taking these pictures. trying to cram as much visual information in them without cluttering it up and still leaving room for the title.

Last year, I decided to change it again, but I thought I'd rearrange the composition of the shot. I spent a hot afternoon indoors with the venetian blinds drawn and spent probably far too much time on placement of items within the frame;

I liked the out-of-focus areas created by the Diorama setting, but I didn't like how the sunglasses looked on top of the typewriter. Then I tried another shot in Sepia; 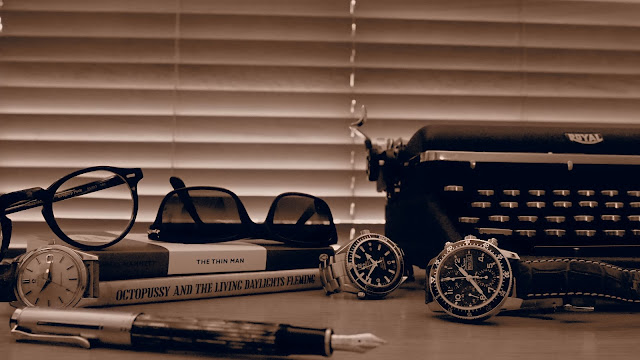 Not bad, but I thought I might tire of it due to its monochromatic shades. So, I opted for the same photo in colour;

This one stayed up until last week, when I decided to upgrade the banner yet again. I really should have waited until the light was better because the end result was lacking a certain something, in my view;

A little too dark in places, not sharp enough, and I think there were other books that I wanted to include in the frame, to give a better overview of my reading tastes. So, I had a few errands to run earlier today and, when I got home, it was reasonably sunny outside (considering that Winter is well and truly here) so I busted out the camera and other bits and pieces and got to work.
A bit of cropping and resizing to arrive at this one;

Still not 100% crazy about this one. However, it will do. I don't have PhotoShop on my computer, so all I can really do is tweak the photo using Microsoft Picture. I have Picasa and IrfanView loaded, but I have never really sat down to mess with them enough to get the hang of them. If I was gonna get serious about it all, I'd perhaps get some form of photo stacking software for sharpening up every portion of the frame.
However, I think I'm happy with a photo if it's taken with enough natural light and I can fiddle with the contrast and brightness afterwards.
Again, I'm not sure how much I like this one. I may take another crack at it later in the year when there's better sunlight available.
Still, it's fun arranging these shots. Also, I think I'll use a different typewriter in the next one. This Quiet De Luxe keeps getting all the glory.

Thanks for reading!
Posted by teeritz at 04:50