My Most-Worn Wristwatches of 2014

And here we are, a few days into 2015 and I've looked back over my wristwatch posts of last year to get an idea of which wristwatches got the most wear. There were one or two surprises. This was a good exercise because I've been thinking about my watch collection with a view to thinning it down a little. There are a few watches that I have out of some sentimental notion, but if they don't get worn, then perhaps they should be moved along to either reduce the number of watches that I have (which DO get worn) or make room for other watches.

I spent a day unearthing some old diaries that I have, which date back to 1994. I was going to keep them, but what for, really? I tore out a few pages here and there which highlighted major instances and events, such as the birth of our kids, and then I systematically shredded the rest of them yesterday. I wound up with quite a few blank pages which I thought could be put to good use for typecasting. I hate wasting paper, after all. 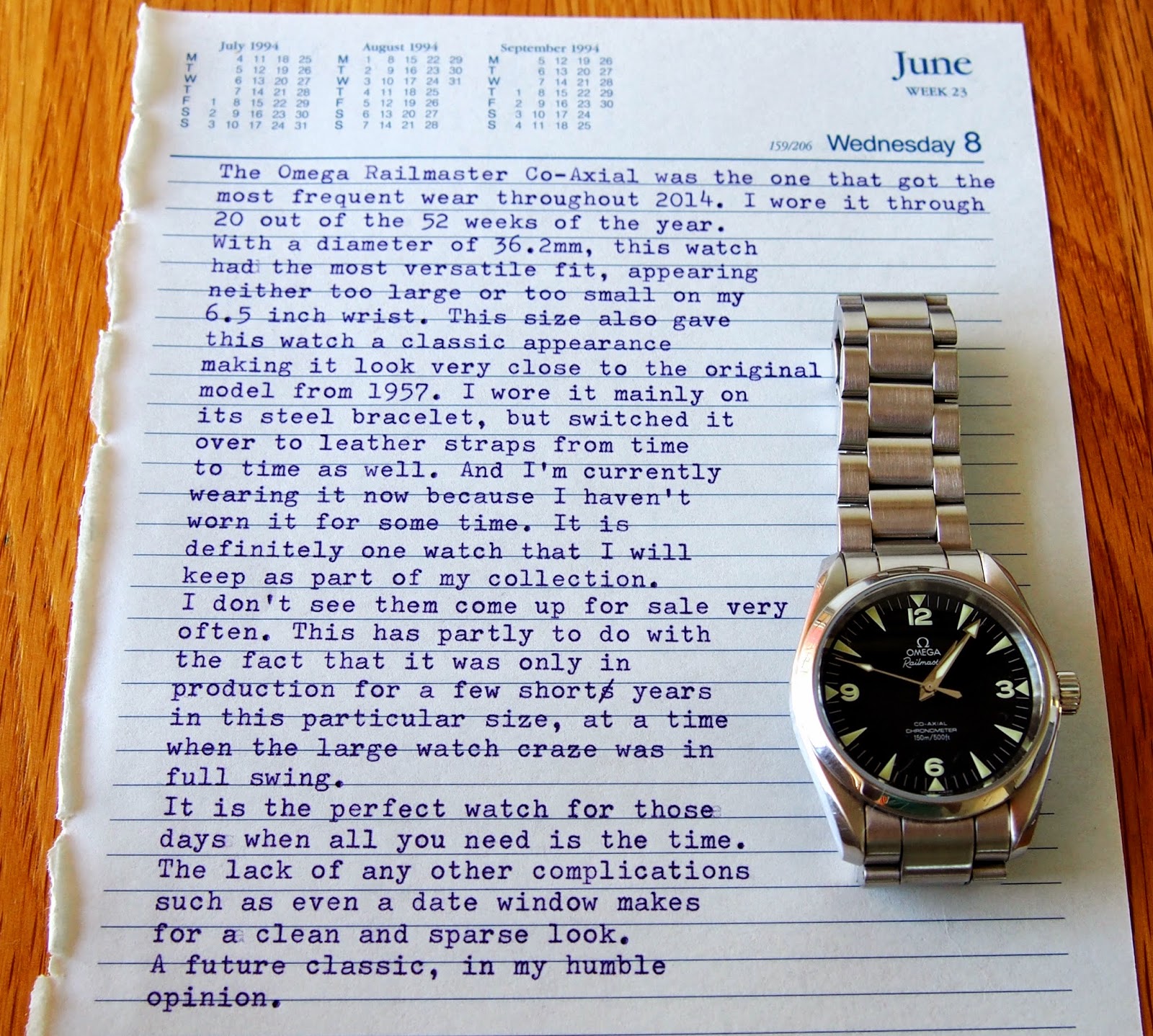 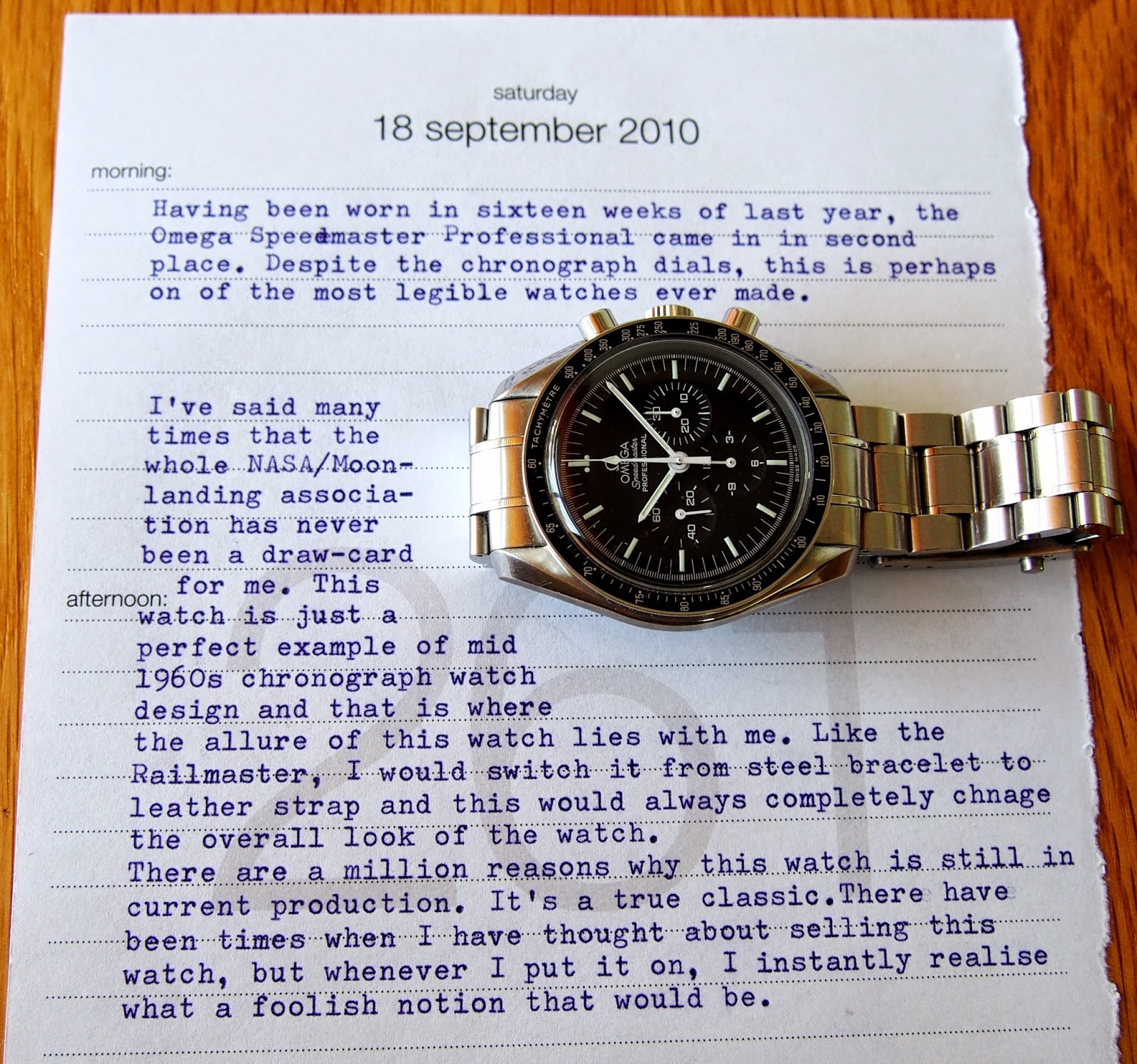 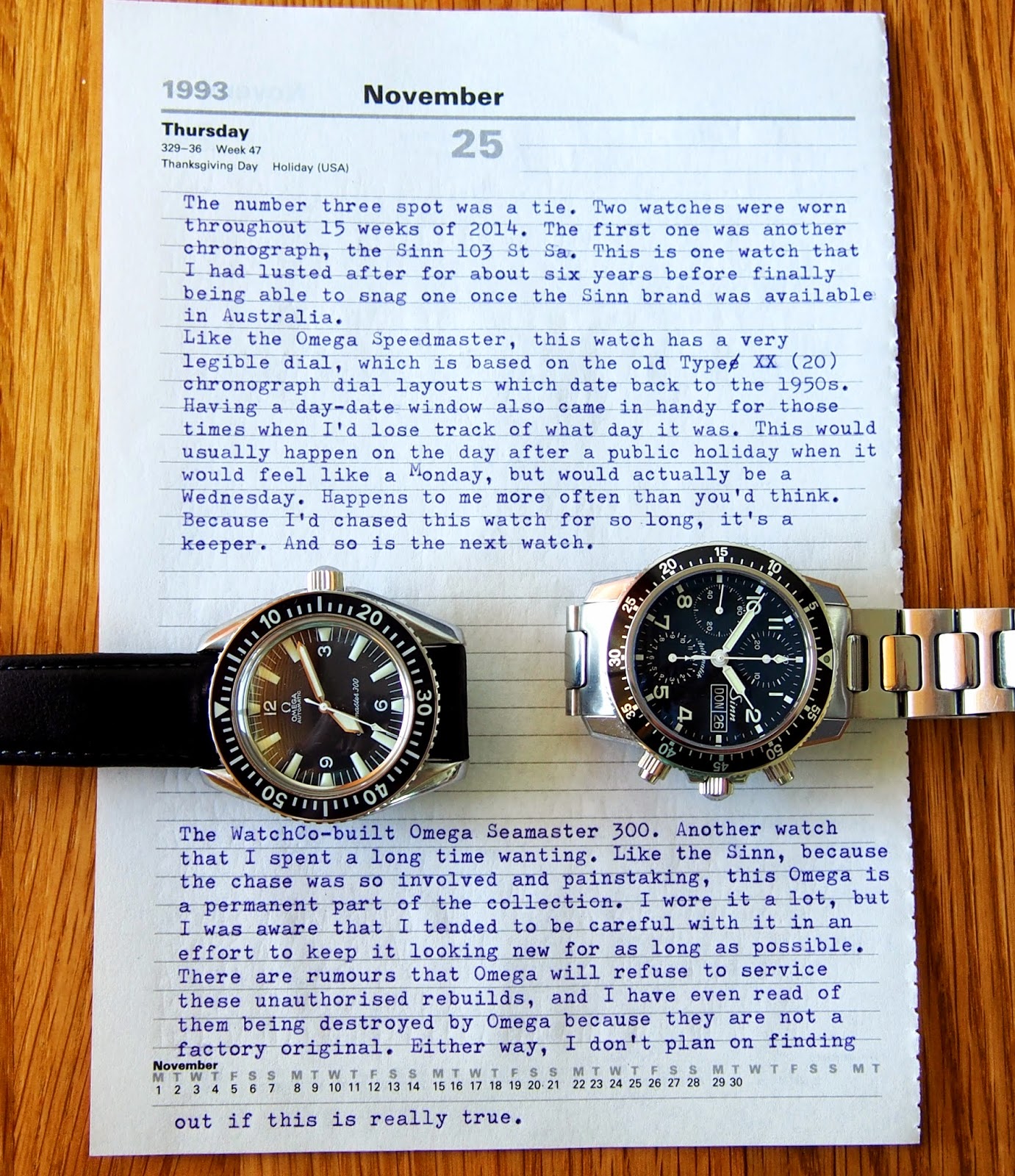 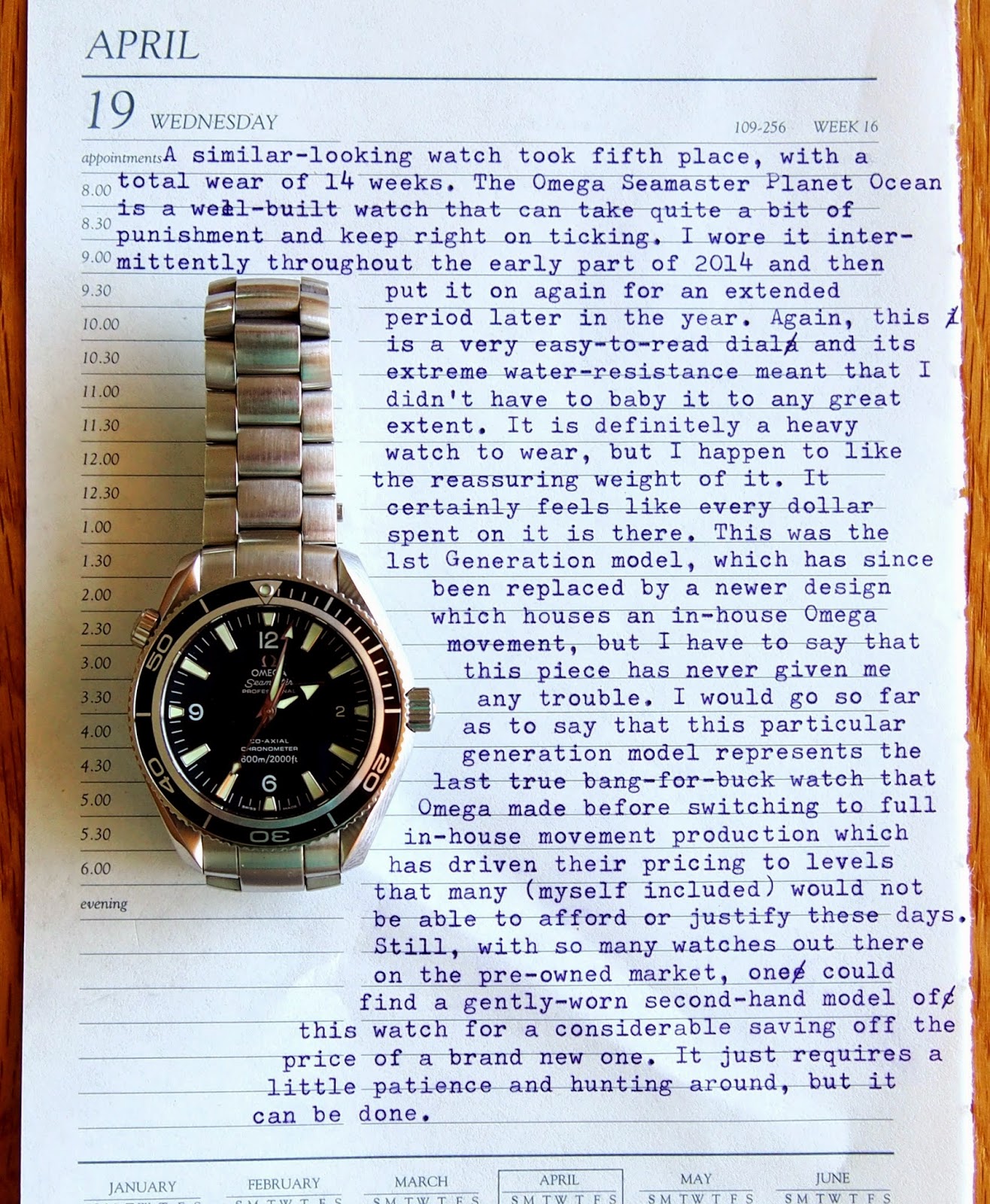 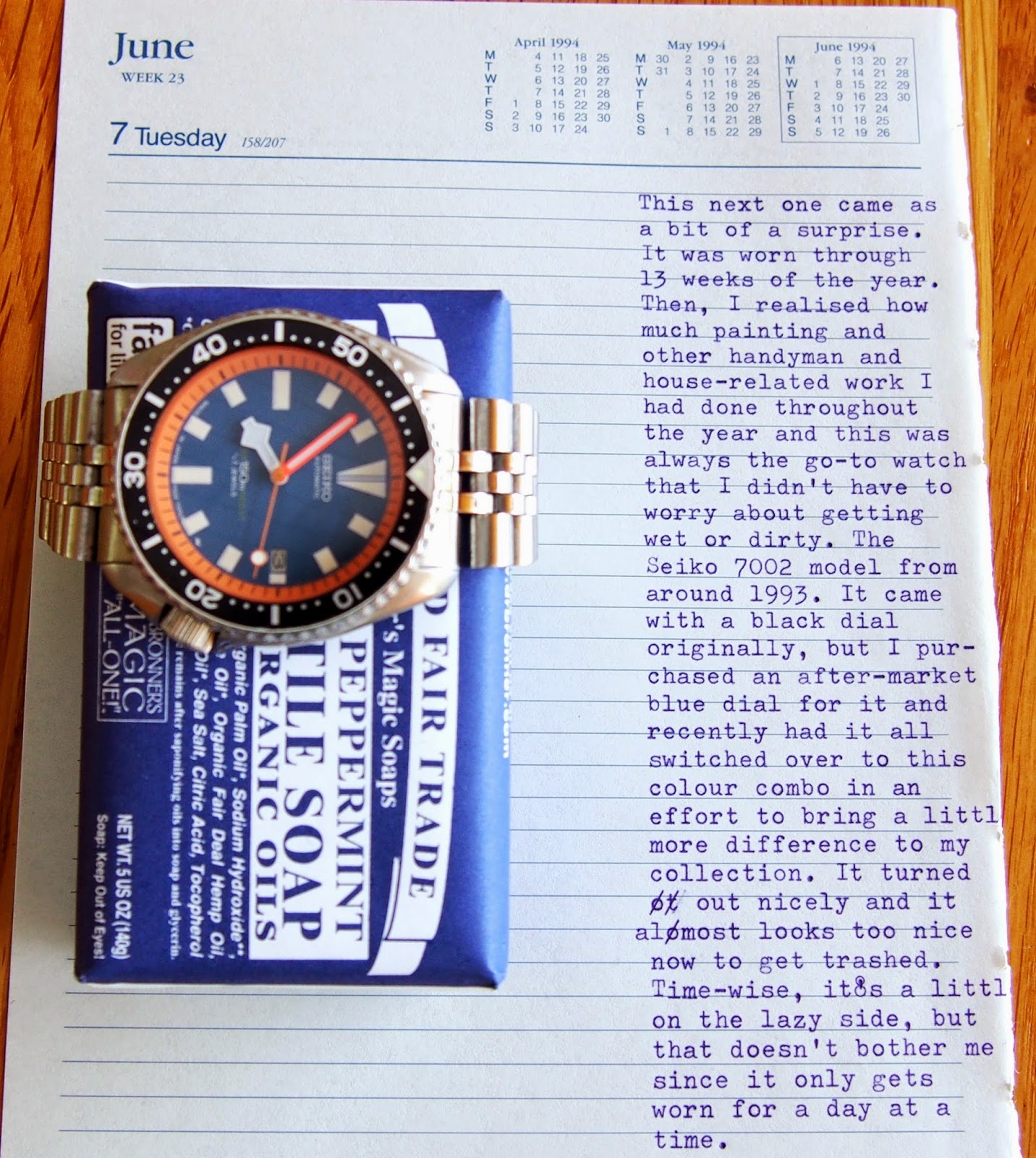 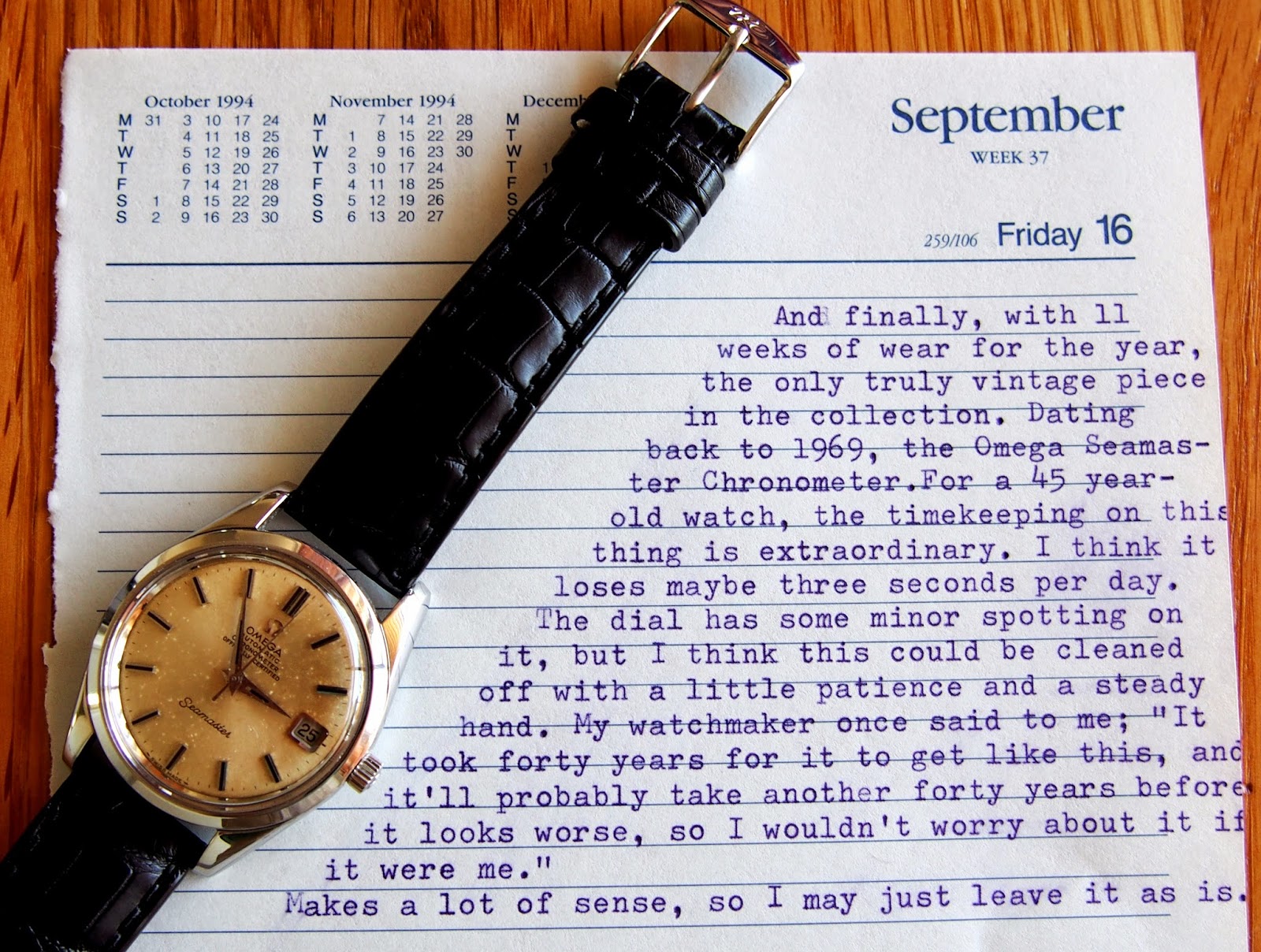 And there you have it. I think I tended to wear the dressier styles, like the Railmaster and the vintage Seamaster, during the colder months when I knew the watch would not be exposed to water so much. The sportier and more water-resistant watches were indeed subjected to dirt and moisture on a regular basis, with the Sinn chronograph being the watch that I took to Thailand in the middle of the year.

Other watches in the collection were worn, but this bunch here got the lion's share of time on the wrist. I'm a great deal clearer on what to do with the collection. A couple of watches will be put aside for my kids to wear when they turn sixteen or seventeen. That way, they'll have a decent watch to wear on a daily basis at school or university. I'm sure I'll probably get them each an all-purpose water-resistant watch for days at the beach with friends. Perhaps something by Seiko, since that company has a wide range of very well-made watches that don't cost an arm and a leg.

Long-term, I plan to sit down and write them both a letter outlining which pieces I will leave for each of them after I shuffle off this mortal coil. I think I'll leave them each a dress watch, a dive watch, and a chronograph. I'll tell them that they are free to do with these watches as they wish, although it would be nice if they hold on to one or two of them, for the sake of history and continuity.
I'll stipulate that the rest of the collection is to be sold off and the proceeds should be halved between them. I'll also mention that if one of them wants a watch that the other one has been given, then they should use the proceeds from the sale to purchase a pre-owned/vintage model just like it. While some watches in my collection may be hard to find (now or in the future), I don't think I have anything that is impossible to track down. But I could be wrong.

In the meantime, I'll whittle the collection down over the next year or two to a more manageable level consisting of watches that actually get worn. Although, I can already tell that this may be easier said than done when I think of how it took me over fifteen years to get it to this state.

Still, there are worse things that I could have spent my money on and I'm fairly certain that, if I sold my entire collection tomorrow, I would make a decent profit on my outlay.

Now, we'll see what 2015 has me wearing on my left wrist. So far, so good. One more pic of today's wristwatch; 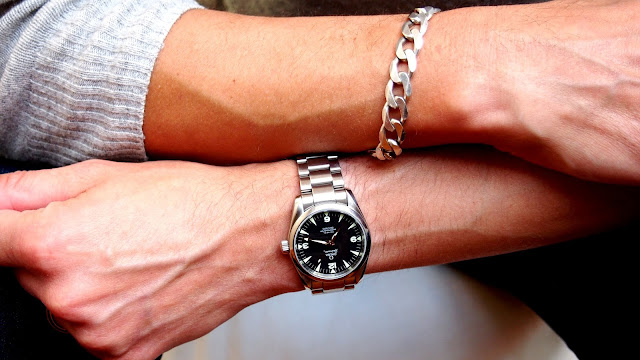