Last Friday
We got a delivery early in the morning. The courier has a habit of walking half-way up the front path and then tossing the package onto our porch. Normally, it'll be a post satchel containing some article of clothing that my wife may have purchased on eBay. One time, he lobbed one onto the porch and it landed up against the screen door. When I opened the door after he'd driven away, the corner of the screen door snagged on the satchel and tore it open.
This courier also has a habit of never closing the gate after he's made a delivery. Our cat likes to take a morning nap on the front porch and there are quite a few neighbours who walk their dogs off-leash past our house. I dread that some dog will one day trot in through the open gate. It'll be on for young and old when that happens.
So anyway, the courier knocked on the door to deliver a mobile phone that I bought for my daughter off eBay. I had to sign for the package. While I was signing, I asked him; "Do you have a driver number or something?"
"Why?", he asked.
"Because I'd like to contact your head office", I replied.
"Why, what's wrong?"
And I went into my litany of complaints about the way he does his job. He didn't take it well. It all ended with him saying "We'll fix everything" as he walked off. It was said in a less than convincing tone.
At least he shut the gate properly this time. 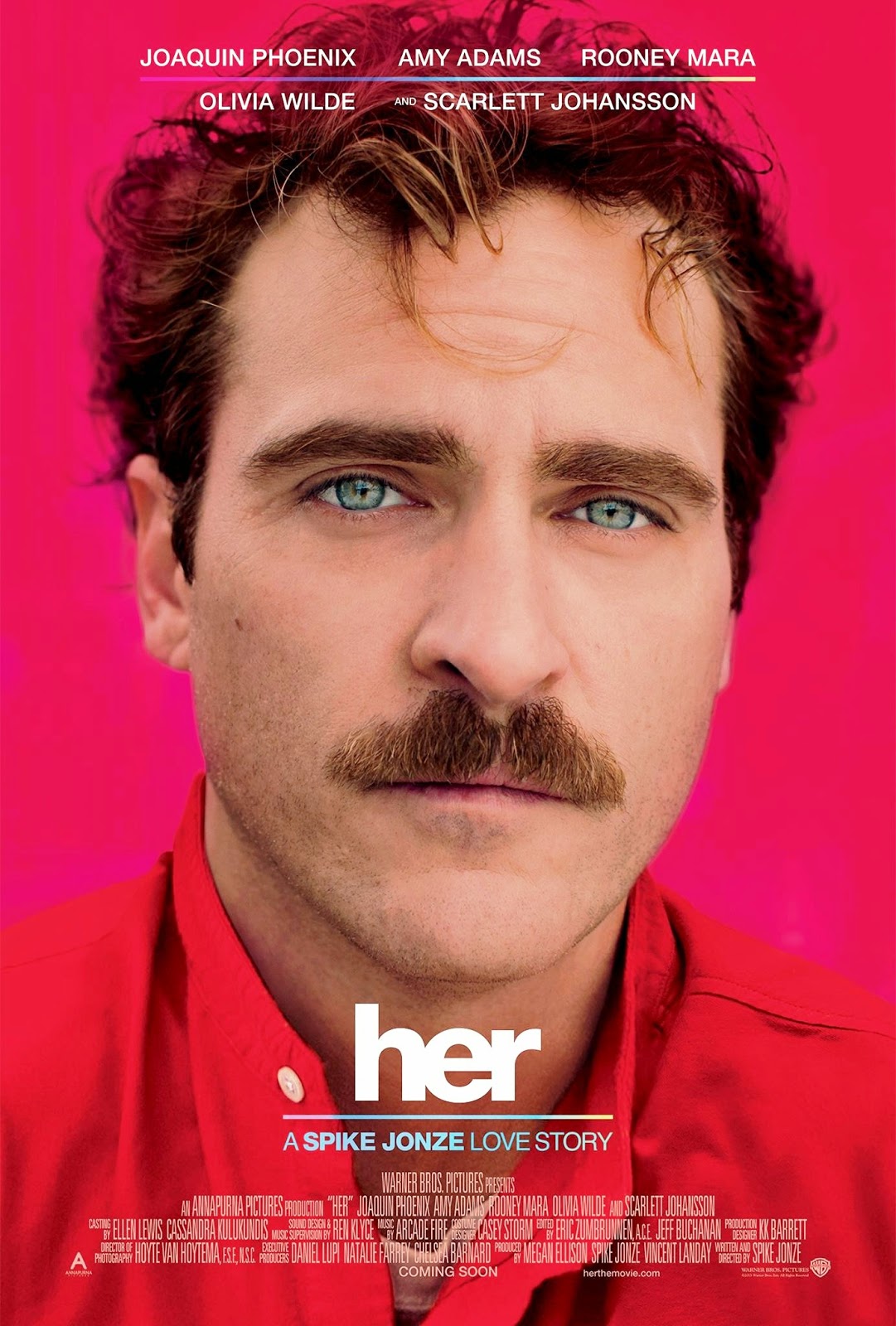 Monday
My wife and I sat down to watch Her, written and directed by Spike Jonze. Set in a not-too-distant future, it concerns a young man named Theodore (wonderfully played by Joaquin Phoenix) who writes letters on behalf of people for their loved ones. He has a way of exactly capturing the emotions of  those whom he writes for. He signs up to use a new computer operating system which is touted as being like nothing else before. As he's setting it up on his computer, he chooses the Siri-like system's voice. From then on, we hear Scarlett Johansson's velvet tones emanating from his computer and cell-phone. The AI on this operating system means that it's a learning computer and, as such, 'Samantha' (as the OS has chosen to name itself) begins to develop a personality as it checks Theodore's e-mails for him, alerting him to the important ones, and scheduling his days. Because this OS learns from its experiences, Theodore begins to grow attached to it as he reluctantly goes through the process of a painful divorce. I don't think I'm giving away any spoilers, but I'll say no more about the story. It says much about the way we rely so heavily on our digital tech. This film got very good reviews upon its release. If you've ever seen any of Spike Jonze's other films, you'll know that his mind tends to work on a different level to nearly any other film director working today. In some ways, he belongs in the same universe as Michel Gondry, who directed Eternal Sunshine of the Spotless Mind in 2004, in which Jim Carrey tries desperately to hold onto his ex-girlfriend Kate Winslet, who has signed up with a company that will erase all of her memories of their relationship.
And speaking of digital tech...

A few days earlier, we went to the phone store to get my daughter's phone hooked up. The next day, she began getting messages from people we've never heard from asking her to check out their Facebook updates.
Nobody in my family is on Facebook. Next day, we went back to the phone store. I was in no mood to be trifled with. Turns out they set her phone up with a previously used number and this is why she's getting these messages. Also, her phone is set to receive Premium Services, whereby she'll get these kind of text messages often. And, to top it all off, her monthly plan is not what I thought I was signing up for. You know my one major gripe with these phone stores? The staff turnover is extremely high. You can never deal with the same person twice in a month, so you therefore can never form a relationship with a salesperson.
So they told me that they could change the number, but that would have a $50.oo fee attached. Ha! We have three mobile phones, our landline, and our internet set up with this company and I was all set to pull the plug on all of it. Then the salesperson dialled Customer Service and handed me the phone. I had to explain it all over again to the girl on the phone. She said that there was normally a $15.oo fee attached to changing a number (nobody knows anything), but that she would waive this fee in this instance.
So that got sorted out relatively stress-free, but I was ticked off about the wrong phone plan set-up. I'll have to wait until next month when I receive the bill before I can change it over to the plan that I thought I'd originally signed up for.
Needless to say, when we get into our next house, I'm switching landline and internet provider.
I've decided also that having a smartphone is actually more phone than I really need and I'm also very sick of having to recharge it every single day. So, as soon as I transfer the 90 or so photos off it and onto my laptop, I'll switch back to my Nokia E63. All I need a phone for is the occasional call or text message and checking e-mails throughout the day. With the Samsung Galaxy S4 Mini that I currently use, I find myself wasting time surfing the web on it. I'm pretty certain that my life won't come crashing down if I don't check this blog or Twitter throughout a day.
So, I'll wait another week or so, once the kids are back at school, and then I'll go get a SIM card adapter for the E63. Gotta simplify life wherever possible.
And I've still been doing a lot of painting around the house. I've gotten a lot of wear out of this Seiko; 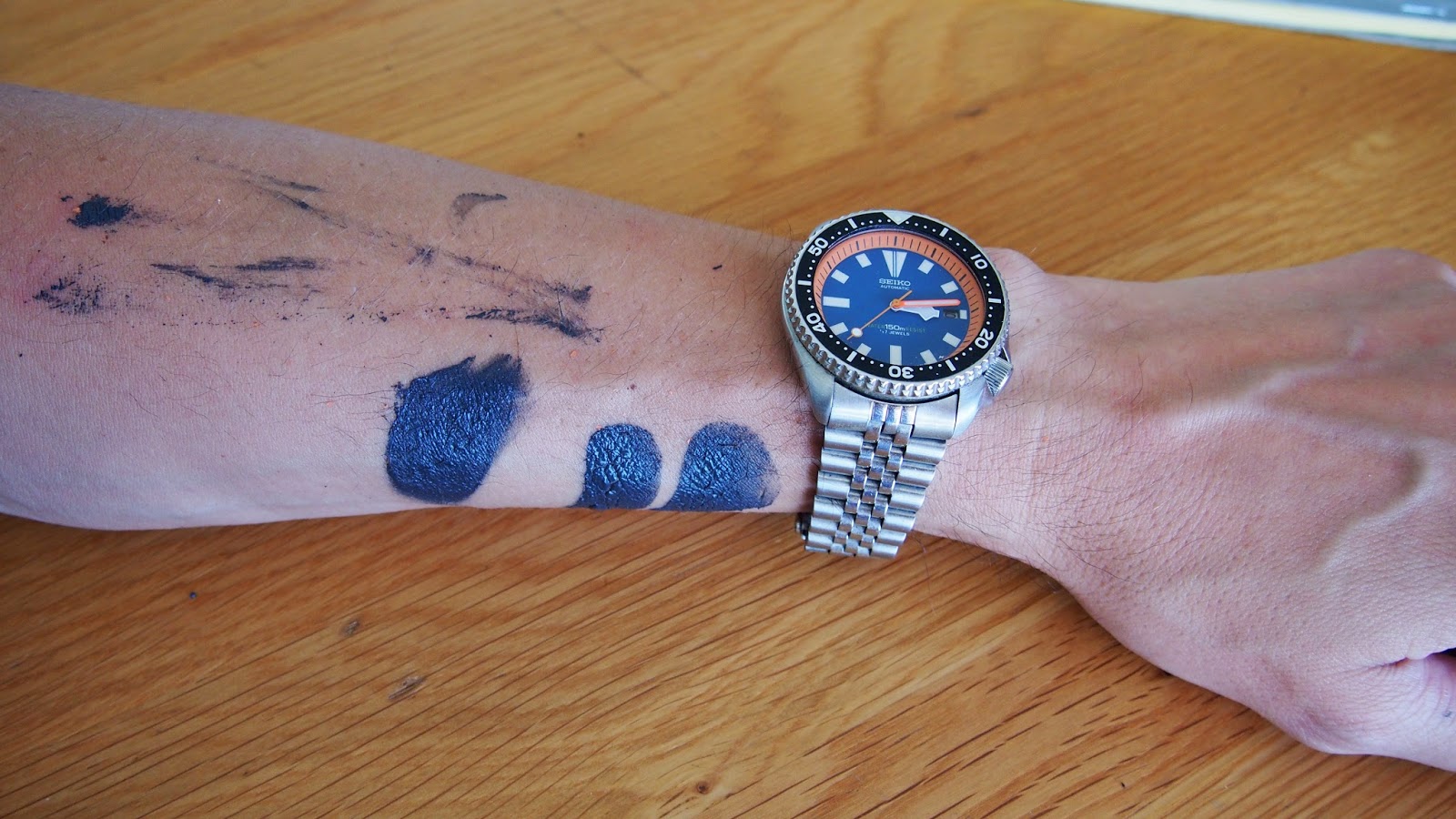 My God, my handwriting's looking sloppy. I've noticed a dull pain in my thumb whenever I hold a pen lately. I hope it's not the beginnings of arthritis.
Check out the Mickey Mouse Band-Aid on my hand. I was reaching into the cutlery strainer on the kitchen sink to get a spoon to stir my coffee with and my knuckle got a little too close to the recently-sharpened chef's knife. That tingled. But at least I now know that I got my five bucks' worth from the knife sharpening dude. 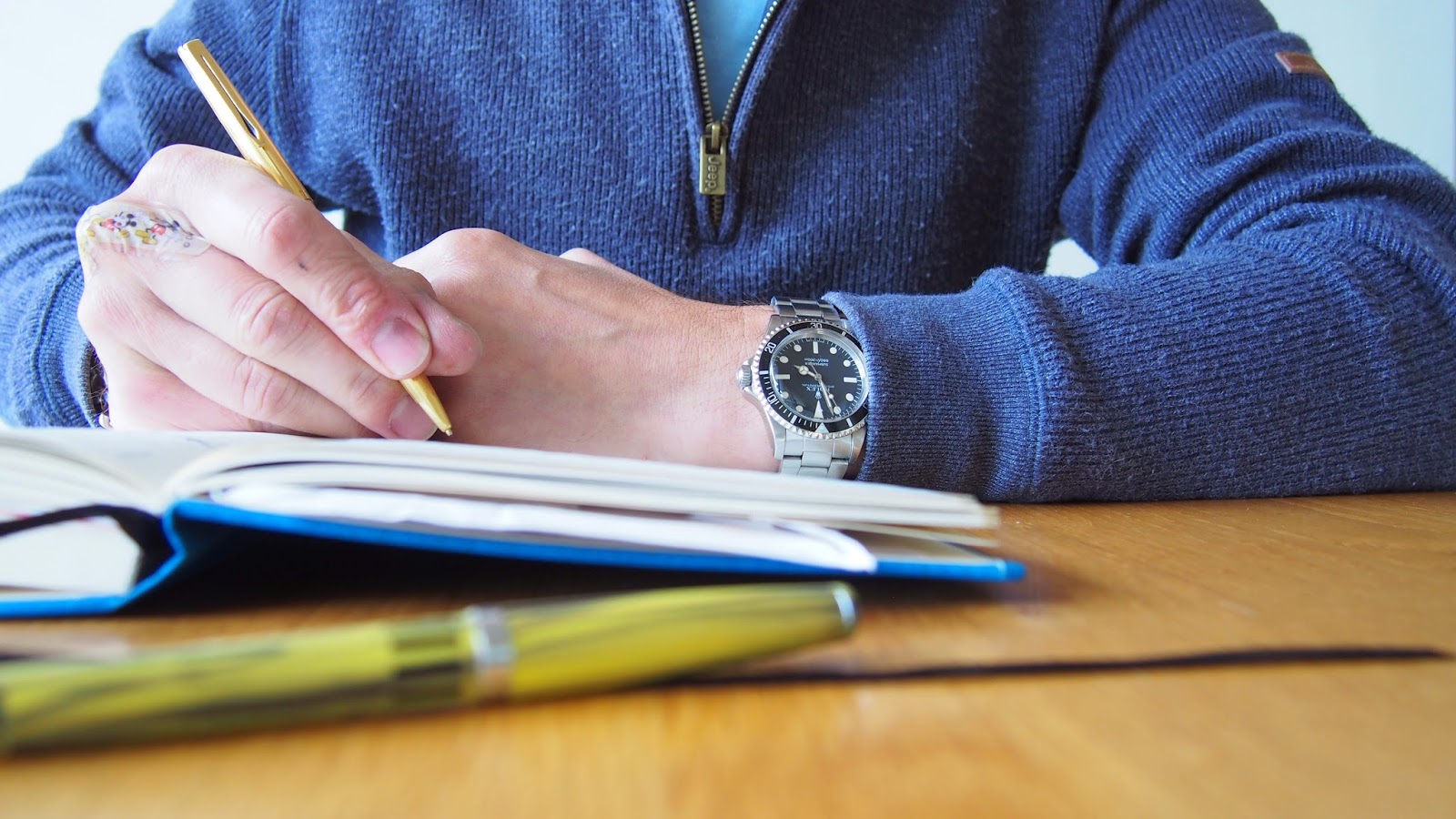 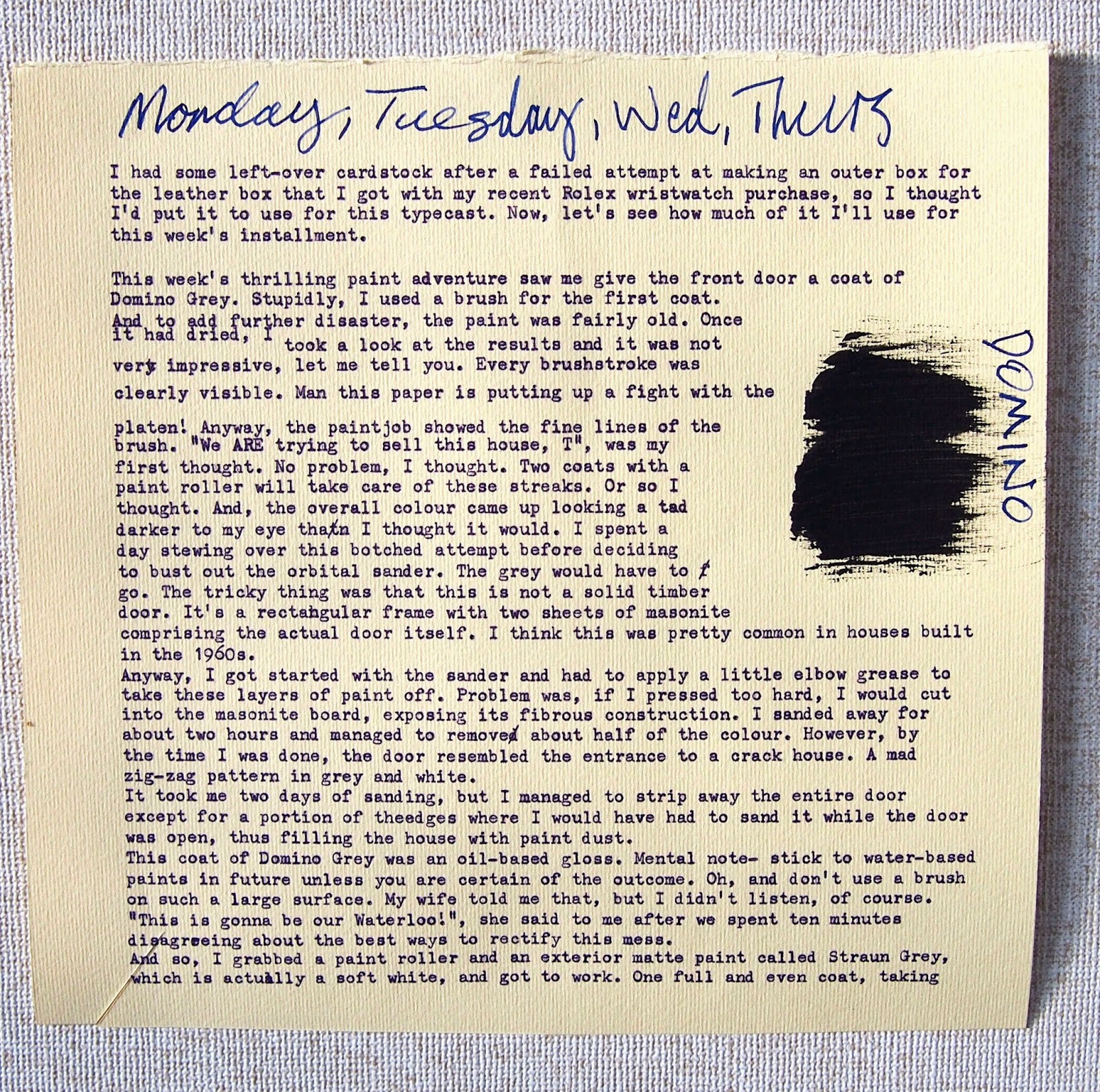 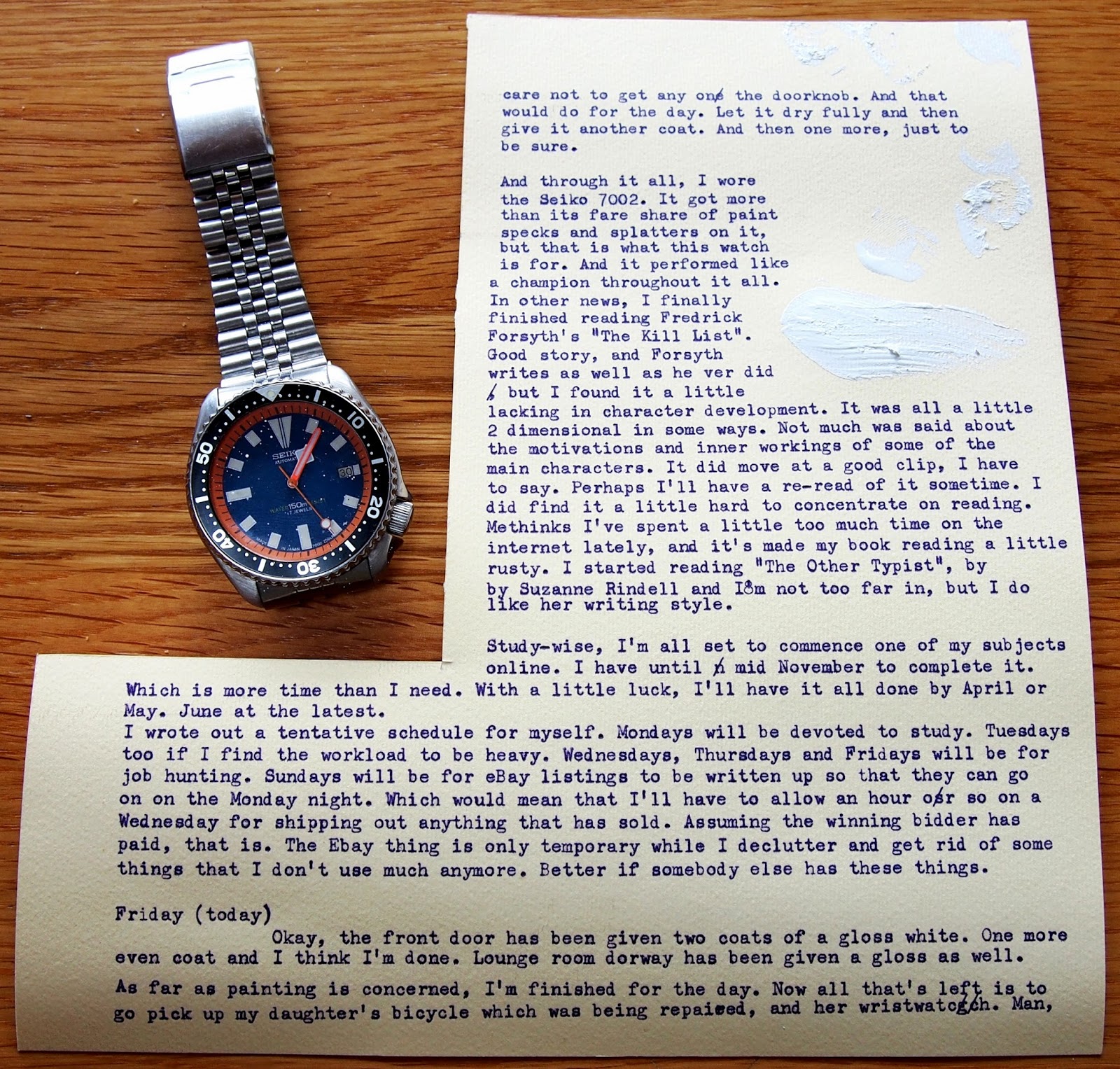 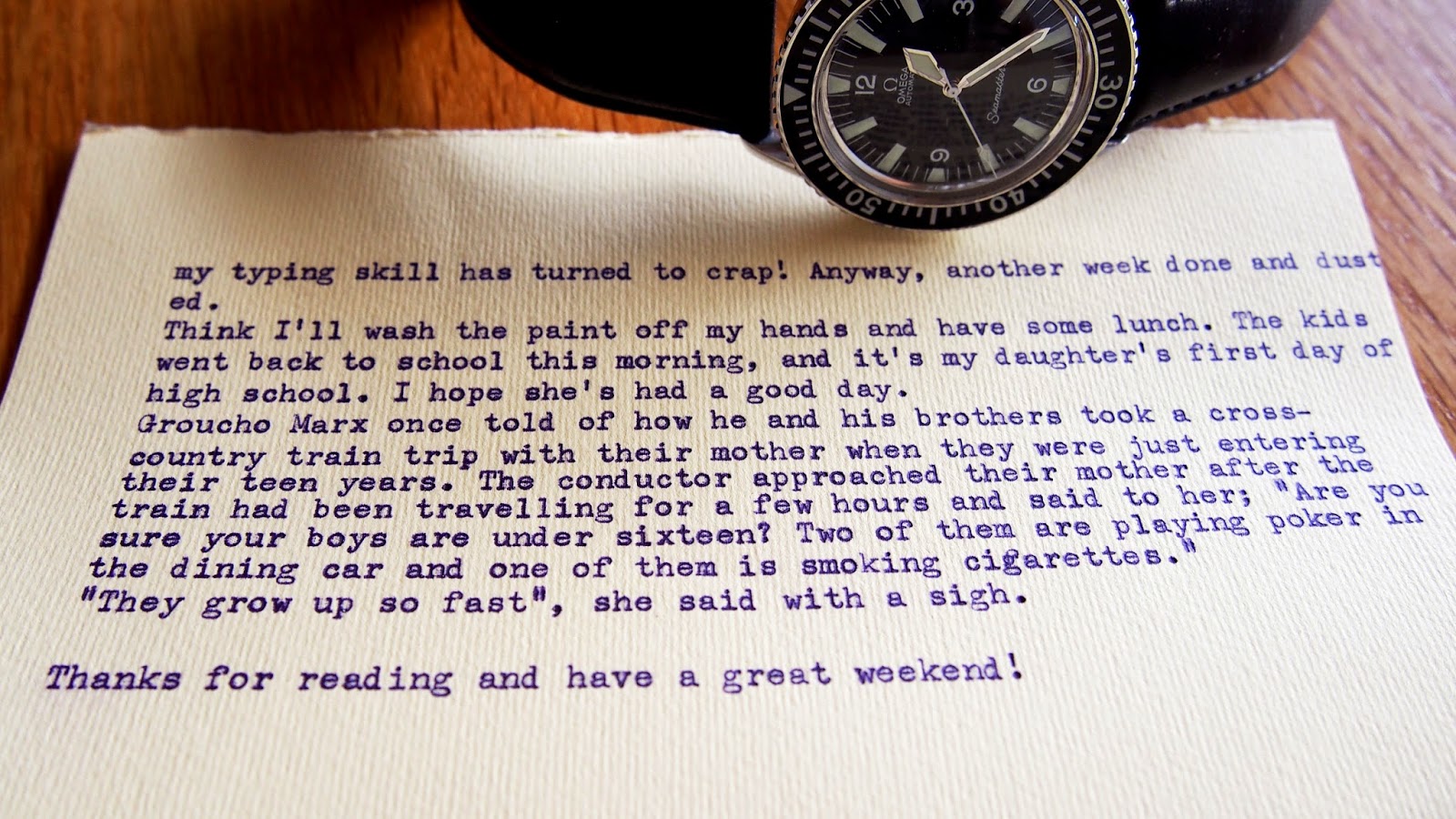 I tried logging on to my student profile so that I could complete a diagnostic competency test. This test is designed to help determine each student's mathematical and comprehension ability. For whatever reason, I wasn't able to log in. I was getting a little steamed. I've been at this institution for over two years now. If they haven't figured out by now that I know how to string a sentence together, then I can't help them. These tests are really designed for students whose native tongue is a language other than English. This helps the institute prepare an appropriate study package for them which takes their English writing, reading and speaking skills into account.
Looks like I'll have to go into the institute early next week and try completing this test on one of the computers in the library. That way, I can ask the IT department for help with logging on. I'd better not get any revenge-of-the-nerds attitude or lip from them or I think I'll go absolutely postal.
Like I said at the beginning, it's been a week of complaints. I'm a year away from fifty and I've decided that maybe I should be a little more assertive and forthright when I get a level of service that's less than adequate.
Anyway, life moves on.

This Seiko has held up well these past few weeks. When I hang up the paintbrush after all this painting, I'll give this watch a proper clean. 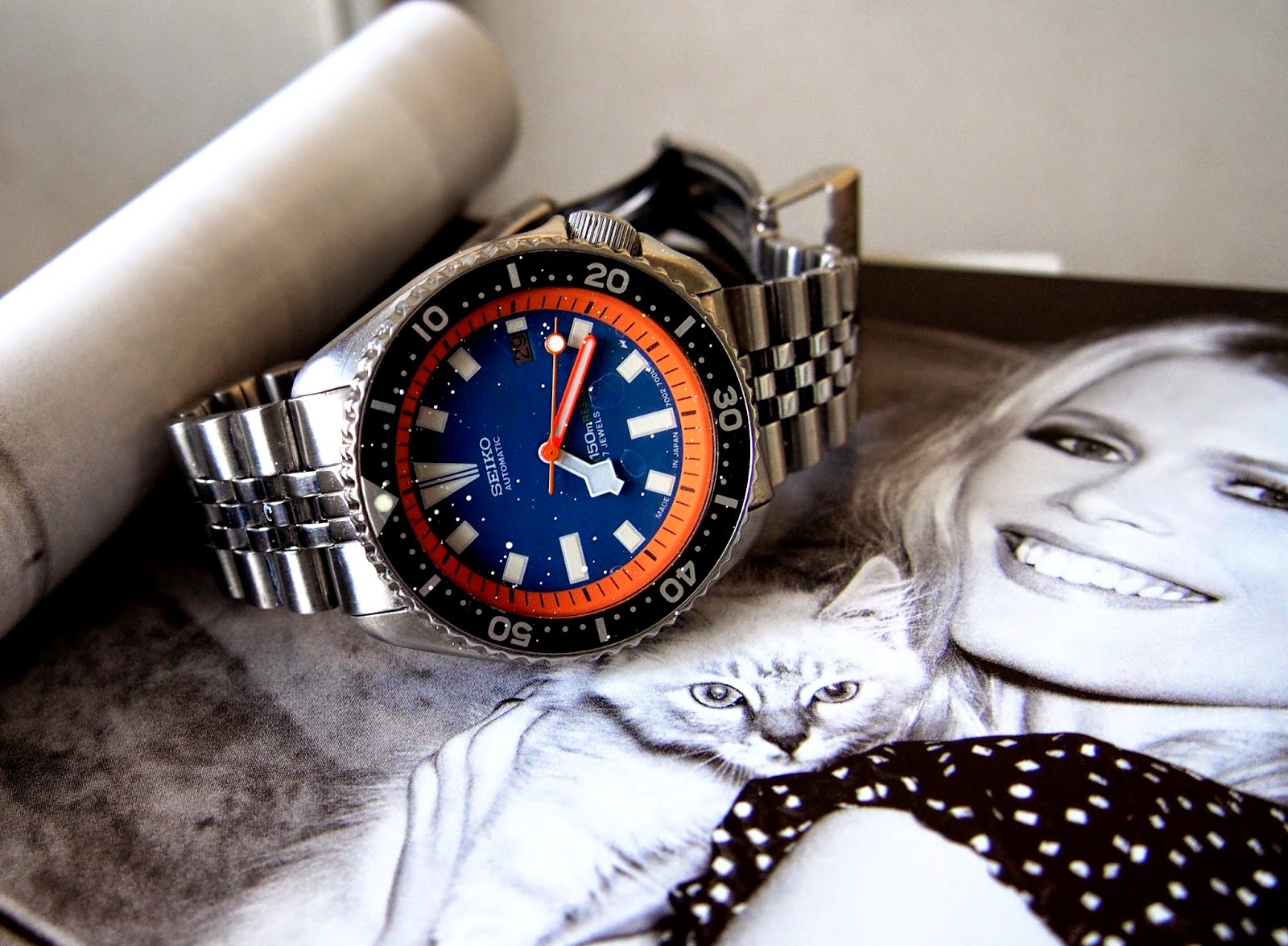 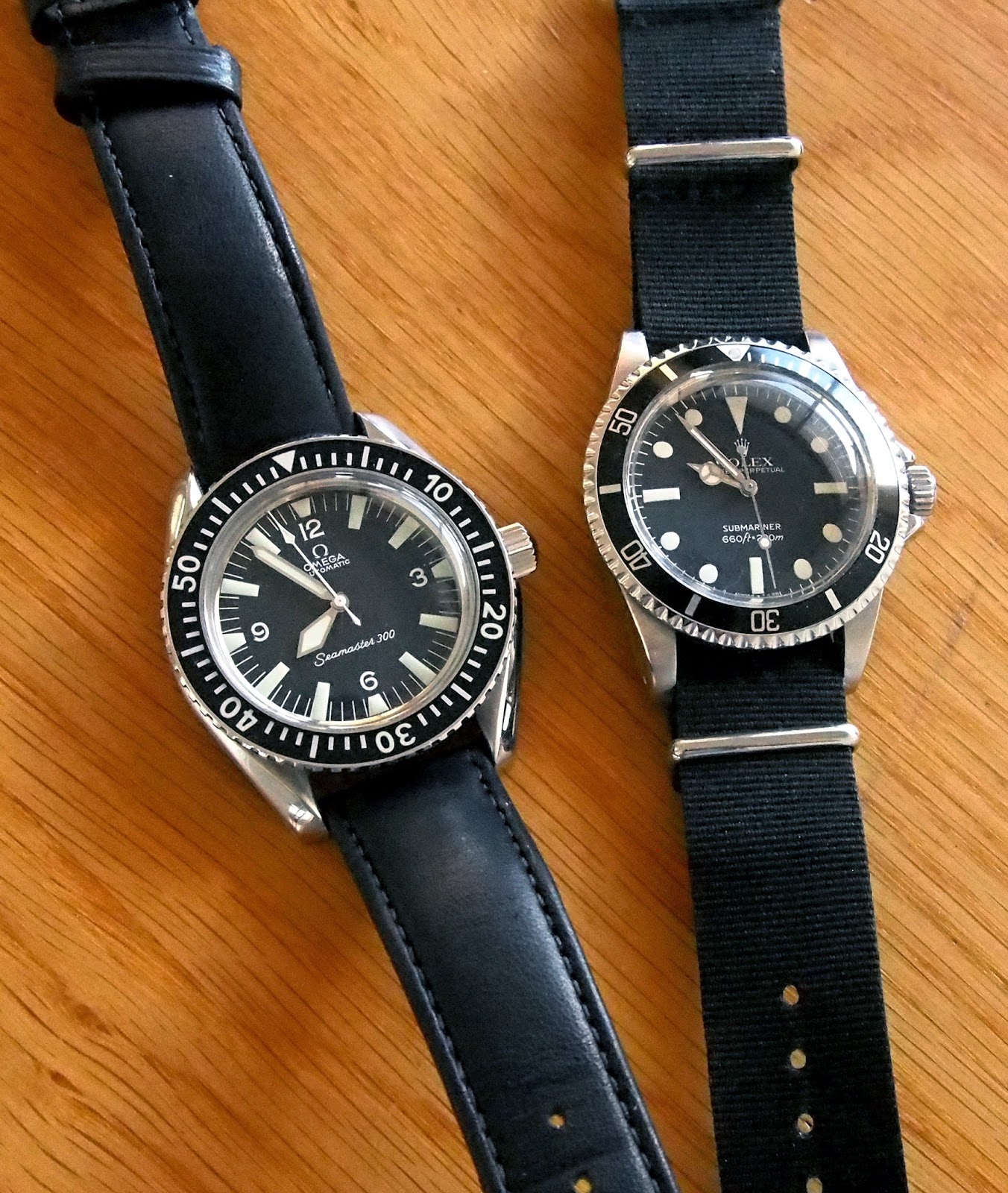 Finished the Forsyth book. Was going to start on the Ross McDonald 'Lew Archer' story, but decided to begin the Suzanne Rindell book instead.
Took the steel bracelet off the Submariner and put a black NATO strap on it to change it up a little. Looks good, but the plain steel Oyster bracelet is so ingrained in this watch's look and history that I think I'll switch it back in the next few days. Although, it is very comfortable on the NATO strap. 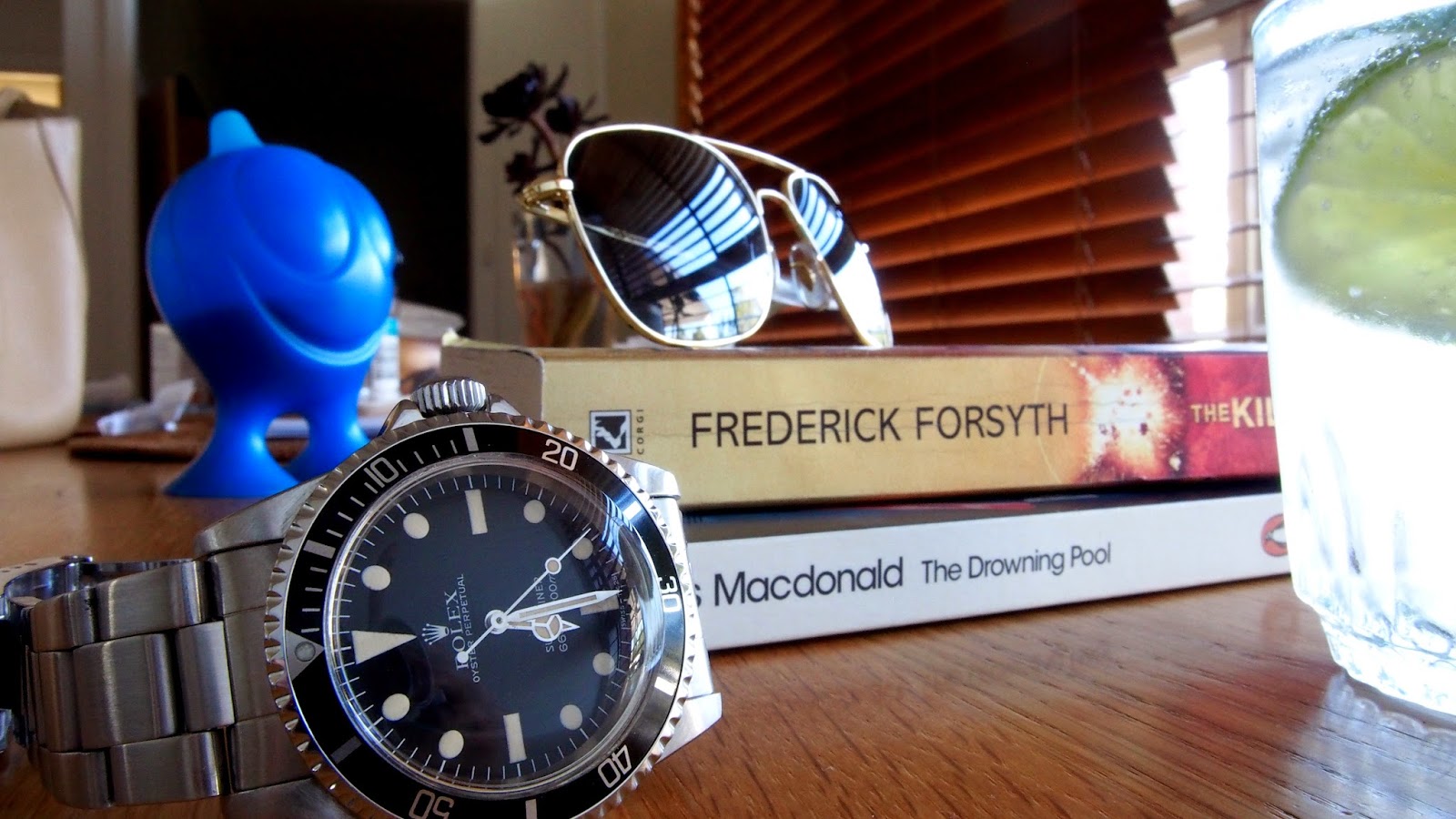 Time to give the Rolex a break. I've worn it every day since I got it, even though it was only for a few hours after painting. To stick with the dive watch vibe, I dug out the Omega Seamaster 300, since I haven't worn it for some time. I've got enough dive watches. Maybe I should take up scuba diving. 'Cos I don't have enough to occupy my time these days. 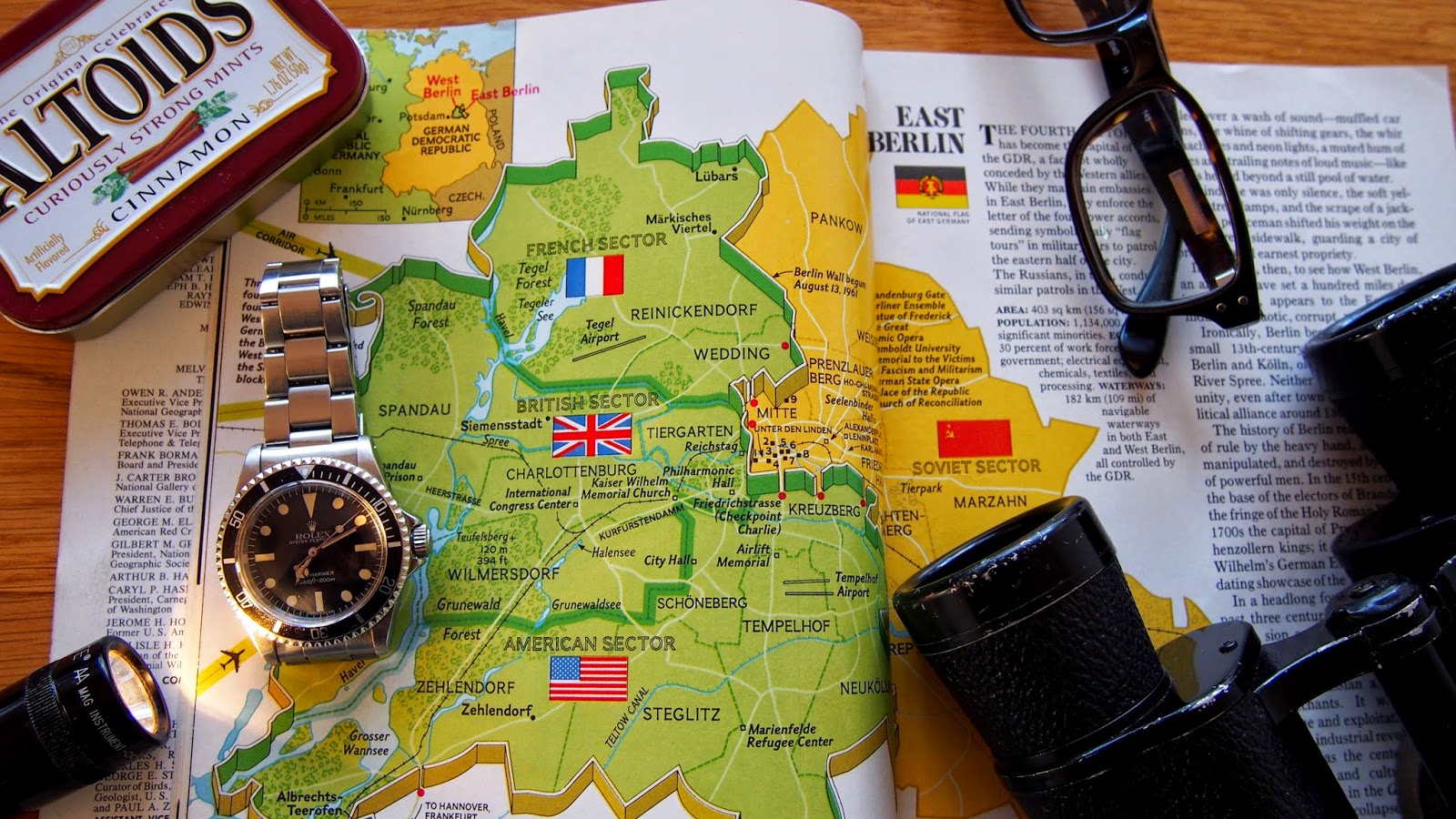