Last Saturday
Actually, I don't remember much of what I did on Saturday, but I'm sure it had to do with gardening because my wife picked this passionfruit flower to show me. Extraordinary layout of colours! I suppose this is what is meant by the phrase "stop and smell the roses".
Luckily, to counter-act the appreciation of this flower, I was wearing my ultra-masculine, cool-as-the-early-Sixties Omega Speedmaster Professional. And, just to keep me grounded, on Sunday morning, I hit my head against the garage door and carved a nice little gash into the top of my head. It's one of those old tilting garage doors, and I thought it was raised a little higher than it was. Either that, or I've grown a few inches in the past week.
Of course, I began to panic because I'd be starting a new part-time job on Wednesday and this wound will be visible to all and sundry. On account of the fact that my hair started going South eight years ago, so I'm sporting a Stanley Tucci look these days. Which is fine by me. He's a fine, fine actor and a pretty funny talk-show guest too. Besides, the no hair look puts me in the same company as Mr Connery, Ed Harris (a true badass) and Jason Statham, to name a few. Whatever hair I do have left is actually a little longer than I prefer, but there's no way I'll be dragging the Wahl clippers over my scalp for the rest of this week. 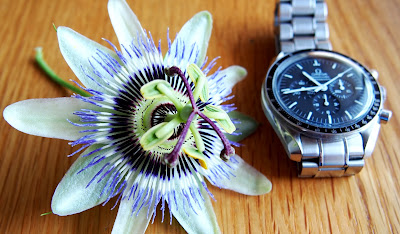 Monday
My son had asked me to download the extra maps and costumes that came with his PS3 game purchases of the last couple of months. I'm no fan of all this DLC (Downloadable Content) that many games come with these days, and I really can't be bothered with playing games online either. Our net connection is switched on enough throughout the day as it is.

Tuesday
Got a last assignment in class today. Forgot that there was one more left. I got just over two weeks to complete it and then that's it for the year as far as study is concerned.
And, since I start the new job tomorrow, I thought I'd get my navy blue suit ready for battle. It looks a little worse for wear, but still adequate. And the pale blue cotton shirt still looks crisp enough. The tie should finish off the look. The pattern is Mad Men enough for how I'll be feeling tomorrow. Had to change watch too. It was time for the (wait for it) Longines Expeditions Polaires Francaises- Missions Paul-Emile Victor re-edition.
I removed the black strap that it came with and put a fake croco patterned tan leather strap on it. I think I'm all set. 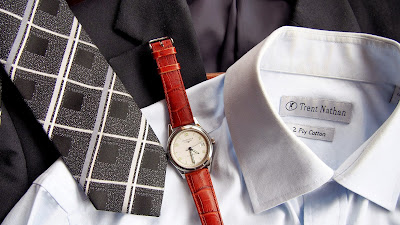 Wednesday
It was an okay day at work. No major highs or lows, a good way to ease into it. Although, I felt a strong twinge of deja vu once I got off the train in the city. Haven't worked in town for a year and a half, but it felt like I had never been away. Not sure how I feel about that at the moment. But anyway, this is a temporary gig until Christmas.
Thursday
A bit of a nothing day. Worked a little on my assignment. Doesn't seem as daunting as it did a couple of days ago. Still had the Longines on as I tried starting a treatment of a screenplay that I've been working on. 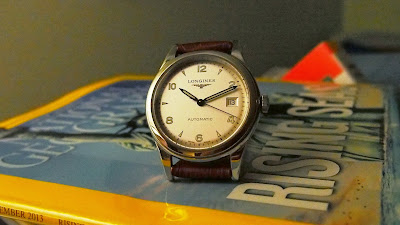 INT: LOUNGE ROOM - NIGHT
Teeritz walks into the lounge room. His wife, is leaning against the heater, folding up a towel.
TEERITZ
Okay, so, in "*************", they
don't explain how it all happened.
MRS. TEERITZ
No, but you get some information as
it progresses. Yours is too
convoluted.
TEERITZ
Problem is, I've got the beginning
figured out and I know how it ends.
Now all I have to do is put in a
logical Second Act. Shit, there's
enough in this for a novel, but I
don't wanna go that way.
MRS. TEERITZ
I still think it's convoluted. You got
too much going on.
TEERITZ
Yeah.
And on it went for a few more minutes. When I get stuck like this, I tend to leave it alone for a while and go back to it. Needless to say, I haven't finished anything. But this is one script that I aim to complete.
Friday
I dilly-dallied (my wife's words) around the house this morning before heading to the gym for a short workout. Off came the Longines and on went the Seiko SKX031 diver on a black ZULU strap. 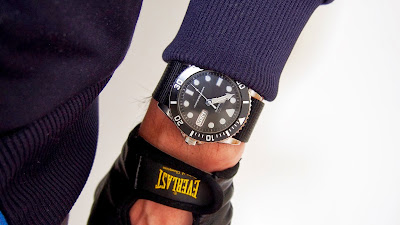 And that's this week. I'm waiting to hear back from about five jobs that I applied for. Three of them were cold enquiries, one was for a sales position that I have a feeling I'm too old for (it's a Fossil boutique) and the other is for a library position. That's the one I'm hoping to hear back from.
Anyway, onwards and upwards, as they say.
Friday night is Pizza night at our house. And I've got a copy of an Indonesian action film called "The Raid" to look forward to.
The blurb on the case says "Deep in the heart of Jakarta's slums lies an impenetrable multi-level safe house for the world's most dangerous killers and gangsters. until now, the rundown apartment block has been considered untouchable to even the bravest of police."
A SWAT team is going in, but once inside, their cover is blown and all exits are sealed.
Cool.
I've read that, based on the success of this film, a sequel is in the works. Nice. Now, as long as Hollywood doesn't decide to remake it and botch it up.
After all, we didn't really need an English-language version of "The Girl With The Dragon Tattoo".
Have a great weekend, all!
﻿
Posted by teeritz at 19:44