Gimme The Keys!- A Tentative Start To Changing The Keytops Of A Royal Quiet De Luxe.

After managing to align the upper and lower case letters on my 1947 Royal QDL, I once again gave some thought to replacing the faded keytops, since they are hard to read in most light. You may recall that I wrote about this some time ago;

Keys to the Kingdom- Considering a Modification to My Royal QDL. Good or Bad Idea?

Now, I'm not here to discuss keychoppers. Much like lawyers and Real Estate agents, keychoppers are sometimes a necessary evil, especially if one is looking to replace a set of typewriter keys.
It would be the same if I had a 1967 Ford Mustang Fastback...

...and I needed to replace a quarter-light window on the passenger-side door. If there was somebody out there junking one of these cars (the madman!) and selling off its parts, then I would deal with them.
Besides, with these keytops, I was planning to resurrect a typewriter, so if I can prevent a set of keys from becoming a pair of cuff-links or one of those stupid bracelets that don't spell out anything intelligible, then that's exactly what I was gonna do.
The seller that I bought the keytops from was selling just the already-removed keys.
And please don't give me the elephant tusk/typewriter keytop analogy. While one is an industrial engineering marvel that revolutionised office productivity and literary output throughout the 20th Century, the other is a living, breathing creature that looks like nothing else on Earth.

And so, to quote a line from a character played by the Patron Saint of Typewriters, Our Man In Hollywood, Mr. Tom Hanks, "and that's all I have to say about that."
Damn, I said I wasn't gonna discuss keychoppers.

Anyway, back on topic, looking at the keybank showed that most of them had faded (The picture below is AFTER I replaced the keytop. Thought I took a BEFORE photo, but there you go). 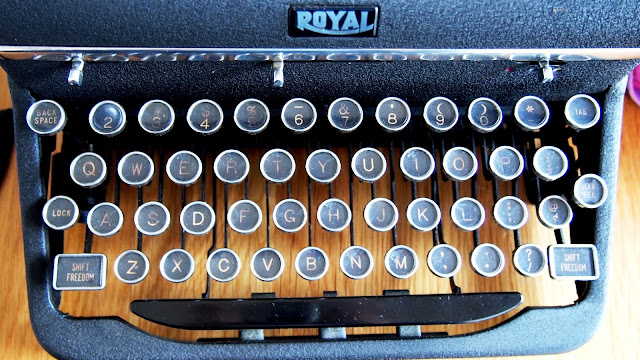 The only ones that appear the most legible are the D, C, V, 6, 8, and 9 keys.
I'm no expert, but I suspect that there may have been some water-entry under the glass (plastic, maybe) keytops at some point, causing discolouration.  I decided to tackle the faded letter 'U' key first.
Using the knife of a Leatherman Wave tool, I prised the metal prongs back off the key and very gently lifted the metal ring away from the keytop arm. So far, so good.
The next part would prove to be trickier. How to remove the card insert from the keytop recess. It was nestled in there since the 1940s, so I figured it was not gonna come out without a fight. My weapon of choice? A pin from a sewing kit. The idea was to push it down the side of the keytop recess and lever it out. Of course, what I hadn't figured on was the fragility of a 66 year old piece of water-damaged cardboard. My first attempt lifted a section of paper away from the card insert. Rather than curse, I figured a light dab with a Texta (Magic Marker- by the way, which of those two names is sillier?) would cover up any mishaps once the glass cover was put back in place.

And this is what I ended up with; 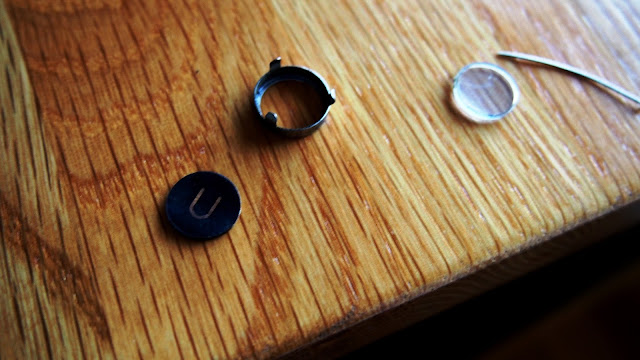 The card insert was definitely faded. Turning it over revealed... 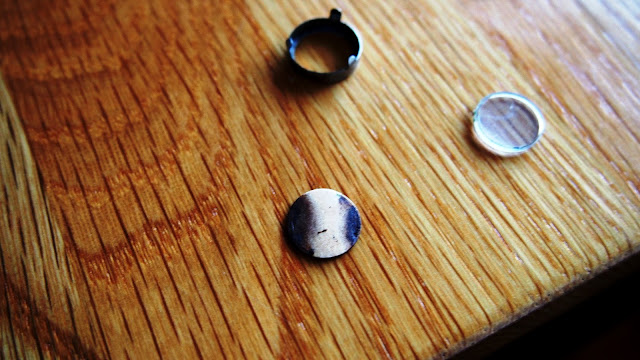 ...that perhaps it had had some water damage at one time. While I had the ring off, I grabbed hold of some stainless steel polish and gave the ring a rubdown. This will probably be the more time-consuming job in the long run.
Looking at the ring, I felt that I could probably bend the prongs a few times before they snap off completely. However, if I do it right, I'll only need to bend them open and closed once. 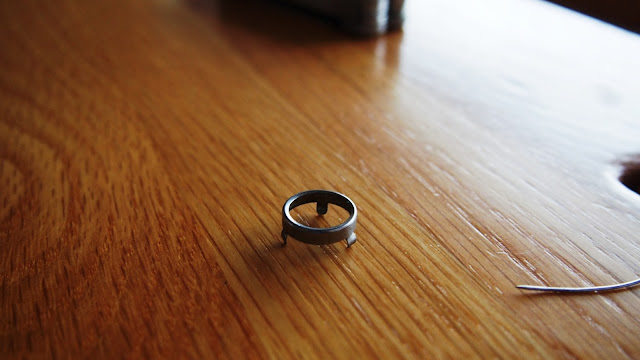 Here's the keytop recess with the card insert removed. I was thinking of a dab of glue to hold the replacement insert in place, but decided against it in case it caused a different kind of discolouration in the years to come. Besides, I reasoned that the metal ring and glass top would hold the insert firmly in place once all was said and done. Please excuse the blurry photo; 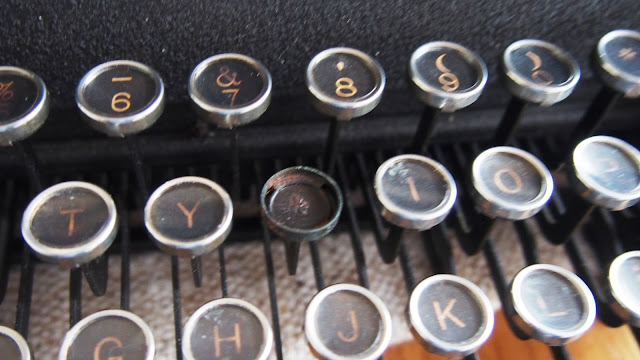 Looking at the two letter 'U' inserts, you can perhaps see that the replacement on the left is in better condition than the removed one on the right. A quick touch-up with the Texta to cover up the small tear on one edge of the card and it was ready to be fitted into the keytop recess. For this, I used a pair of tweezers and took my time lining it up so that it sat upright  and straight in the recess; 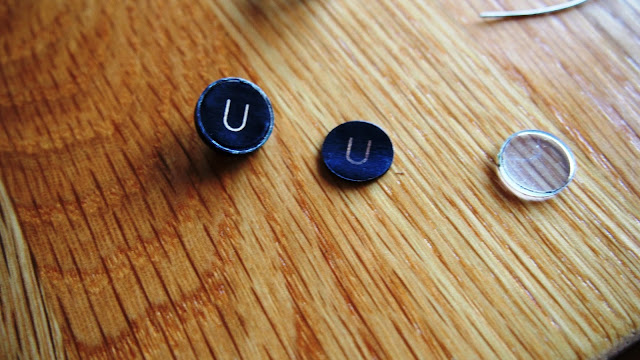 I used a pair of flat-nosed pliers to bend the prongs on the rings back into place. Not a 100% perfect job with one prong (slightly visible along the bottom edge of the key), but it's all secure and back in place; 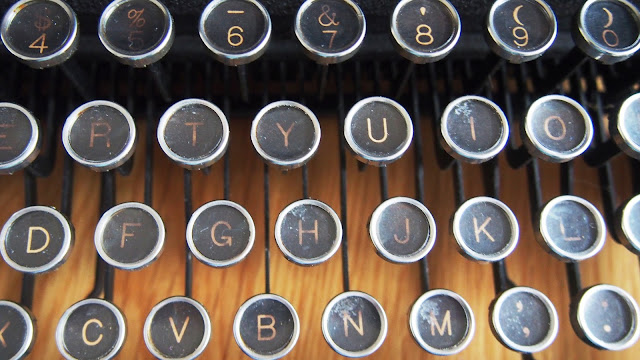 Okay, one down, thirty-nine to go!

Having these keytops also means that I have some spares handy in case the steel does snap off and I can also replace the glass tops that are scratched and chipped.
Hopefully, this Royal with look as good as it types by the time I'm done with it.

Thanks for reading, all!
Posted by teeritz at 00:02